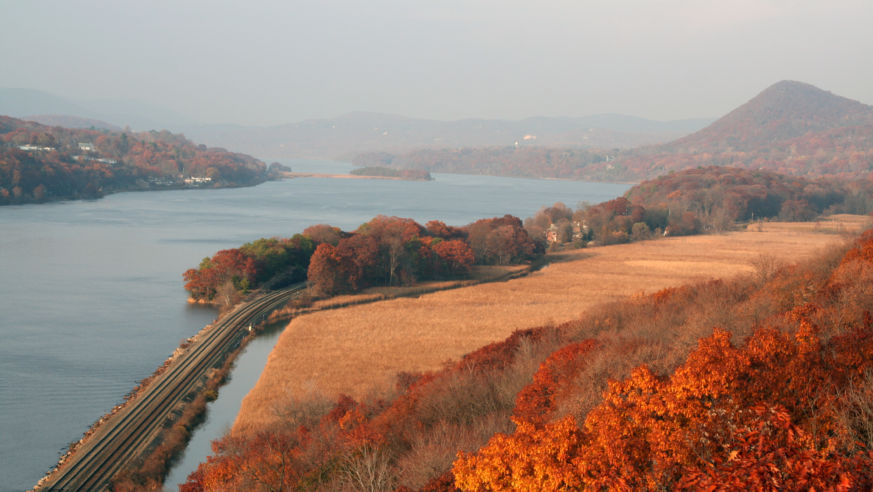 Late fall view taken in the early morning of the Hudson River looking north at the Historic Hudson Valley, from the Bear Mountain Bridge.

Just north of New York City is one of America's most scenic and historic corridors, amid the mansions of presidents & plutocrats, artists & inventors.

Ever since the Dutch patroons settled the green hills that flank the Hudson River in the seventeenth century, aristocrats have been building their dream homes along its scenic banks; today many are open to the public, offering a glimpse into the rarified world of America's early movers and shakers. Built mostly on the eastern bank, they cover every style in the book, from Gothic to Beaux-Arts to Federal; this concentrated wealth of historic architecture, unique in the United States, can easily fill a week's drive or more (especially during its gorgeous fall foliage season), but you can take in the approximately 130-mile stretch from New York City to the town of Hudson in as little as three or four packed days.

In New York City, car rental outfits are plentiful; cut rates in half by renting at Newark Airport. Invest in a good regional map and head north on the Henry Hudson Parkway, which leads into the Saw Mill River Parkway and to Tarrytown, the first stop. From there, scenic Route 9 links the rest of the towns, though the Taconic State Parkway may be used when time is short.

And you can save bucks as well as time by following a classic itinerary focusing on the historic highlights and patronizing the clusters of economical motels and dining spots where you can eat well for less than $15 a person. Note that most attractions close from approximately November through April, with some opening again briefly in December with romantic holiday candlelight tours; always check when planning your trip.

(25 Miles) Head north out of Manhattan on the Henry Hudson Parkway, past white birch trees and the occasional creek tumbling over mossy boulders, the boxy tenements of the Bronx melting into inviting forests freckled with red-brick and white-clapboard towns. In well under an hour - but light-years away from Manhattan - you make your first stop, the pretty village of Tarrytown. This is Sleepy Hollow country, so don't miss Sunnyside (W. Sunnyside Lane, 914/591-8763), the riverfront homestead of that tale's writer, Washington Irving. This Dutch stone cottage "all made up of gable ends, angles and corners," in Irving's words, makes an excellent spot for a picnic.

Adjacent is Lyndhurst (635 S. Broadway, 914/631-4481), a sprawling jumble of towers, rose windows, and steep roofs that's America's finest example of Gothic revival. This 1838 cross between an Arthurian fantasy castle and a setting for a romance novel is dressed in "Sing Sing marble" quarried by inmates from the notorious Ossining prison nearby. The elaborate interior fools our eyes with trompe l'oeil plaster passing for marble, mahogany, and flocking, a technique then much in vogue (and ironically more expensive than the real thing).

It's pricey, but you do get a lot of sightseeing bang for those bucks at Kykuit ("KIKE-it," Dutch for "lookout"; 914/631-8200), a wisteria-clad stone mansion built in 1913 for John D. Rockefeller and which housed four generations of his clan before joining the National Trust as a historic site. Approaching on the shuttle from the Kykuit Visitor Center at Philipsburg Manor in Sleepy Hollow, the scale of the grounds is impressive, stretching down to the river and dotted with Governor Nelson Rockefeller's modern sculptures. The gardens, fountains, and vistas are worth the trip in and of themselves, but the house also offers great artworks, furniture, and Oriental porcelain, and there's even a fascinating collection of classic cars in the coach barn.

Eats In the small but lively Tarrytown downtown, inexpensive restaurants abound despite the upscale look. Top picks: Bella's Restaurant (5 South Broadway, 914/332-0444) Plain, honest diner-style food in a plain, honest setting; entrées $6.25 to $11.25 with bread, salad, and two sides. Main Street Pizza (47 Main St., 914/631-3300, mainstreetpizzatarrytown.com) The pizza's great, but the dinners ($5.75 to $12, including bread and either pasta or salad) are even better in this sparkling tiled eatery.

(55 Miles) The next morning, pick up Route 9 for the idyllic 25-mile drive to the town of Garrison, where Boscobel (1601 Rte. 9D, 845/265-3638; boscobel.org), a 12-room mustard-and-cream Federal-style frame house, was built in 1808 for a certain States Morris Dyckman upon his return from England (where, like many staunch loyalists, he'd fled after the British defeat in the revolution - not unlike King Charles II, who hid from the anti-Royalist troops of Oliver Cromwell in the English forest for which the house is named). Simple and practical, the period furnishings are a far cry from the overwrought Victoriana of some of the area's other manses. Don't miss the floor in the entry hall; a cloth painted to look like marble. From here, time permitting, two great side trips across the Tappan Zee Bridge are the military academy at West Point (845/938-2638; general admission free, guided bus tour $6 adults, under 12 $3) and the Storm King modern art center (Old Pleasant Hill Road, Mountainville, 845/534-3115; adults $7, seniors $5, students $3, under 5 free).

Continue north into nearby Cold Spring, one of the Valley's more charming - though admittedly expensivish - towns (though with several decently priced dining spots). Stroll along Main Street, admire the neat Victorian homes and poke around the many shops and antiques dealers that have sprung up to serve the weekend hordes from New York.

Another 27 miles on Route 9 will take you to Hyde Park (zooming through the sprawl of Poughkeepsie), in terms of mansions perhaps the Valley's mother lode. Its pi`ce de résistance is the Franklin Delano Roosevelt National Historic Site (Rte. 9, 845/229-9115; nps.gov/hofr), the birthplace, home, and gravesite of our 32nd president. Dating from the early nineteenth century, the Georgian colonial revival edifice (known as Springwood) offers a fascinating look into his life with furnishings, busts, and memorabilia. The first-ever Presidential Library and Museum is here, too, born of FDR's desire to provide future generations with easy access to the documents of his presidency. The museum offers thought-provoking exhibits ranging from his role in World War II to his White House desk to Eleanor Roosevelt (whose Dutch-style hideaway, Val-Kill, is also on the estate and visitable).

Use Hyde Park as a base for checking out lots of other attractions within striking distance: apart from the Samuel Morse home and museum in Poughkeepsie (2683 South Rd., 845/454-4500; lgny.org), nearby are several pick-your-own apple and berry farms (I especially like Greig Farm on Pitcher Lane in Red Hook, 845/758-1234); the Old Rhinebeck Aerodrome in Rhinebeck (44 Stone Church Rd., Rhinebeck, 845/758-8610; museum $6 adults, $2 ages 6-10, weekdays; museum/air show $12 adults, $5 ages 6-10, weekends), a museum and summertime air show featuring World War I aircraft; and the Omega Institute (150 Lake Dr., Rhinebeck, 800/944-1001), a moderately priced New Age resort east of Rhinebeck that from May to October offers summer-camp-style pleasures mixed with classes and talks on topics both familiar and far-out.

(35 Miles) The northernmost stretch of our Route 9 itinerary includes some jewels of its own, including Clermont, a white-frame colonial-era landmark tucked away in northern Dutchess County, so we cruise north, sometimes on Route 9, sometimes along hilly country lanes bordered by low stone walls and fruit orchards, with quick stops along the way at the grand Mills Mansion (Old Post Rd., Staatsburg, 845/889-8851; adults $3, ages 5-12 $1), another Gilded Age robber baron's playground between Hyde Park and Rhinebeck, and at Montgomery Place (845/758-5461; adults $6, seniors $5, ages 5-17 $3), a lovely nineteenth-century jewel on Annandale-on-Hudson's picturesque River Road.

North of Red Hook and west of Route 9 (518/537-4240; adults $3, seniors $2, kids 5-12 $1) is the oldest (1730s) and charmingly simplest of the riverfront estates - Clermont, the ancestral homestead of the Livingston clan. George Washington and other founding fathers really did sleep here; it was, in fact, Robert Livingston who administered the oath of office to our first president and served as minister to France. As if that weren't enough, he also bankrolled Robert Fulton's history-making steamboat - which took its name from the house and stopped by in 1807 on its maiden voyage down the Hudson.

From Clermont, the last half-hour stretch of Route 9 takes you past more orchards and on to the once-roughneckish town of Hudson, a former whaling center that fell on hard times when that industry went belly up, and more recently has reinvented itself as the Valley's antiques capital, with pricey consignment shops everywhere you look and even the occasional celebrity driving up from New York to refurbish the penthouse (fortunately, most lodging and restaurant prices haven't yet gone similarly upscale).

Take a leisurely stroll through the restored red-brick downtown, which mostly means Warren Street and antiquing. Not all of it's priced out of reach; some surprising, smaller values can still be snagged here. Two more local manses merit stops. In the town of Kinderhook about a half hour north on Route 9H is Lindenwald (518/758-9689; adults $2, under 16 free), the eclectic Victorian home and farm of Martin van Buren. Our eighth president may not be our best known, but he did help lay the foundations for the partisan politics we all know and love. The second house is one of the Hudson Valley's funkiest sights, perched high on a hill four miles south of Hudson and right across from the Rip Van Winkle Bridge leading across the Hudson to the Catskills. Commanding a view of the mighty Hudson slicing through wooded hills, Olana (Rte. 9G, 518/828-0135; adults $3, seniors $2, kids 5-12 $1) is the the quirky Persian-style home of nineteenth-century landscape painter Frederick Church that has caused many a jaw (my own included) to literally drop. Inside, the decor is eclectic but heavy on Islamic art. In a way, it's more about the setting than the house-which, while interesting enough with its fancy brickwork and Victorianoid turrets, is clunky in its attempt to re-create the subtleties of Middle Eastern architecture in a New World setting.

From Hudson, drive directly back to New York City in two hours on the Taconic Parkway or the New York State Thruway, cut eastward to the Berkshires of Massachusetts on Route 23, or continue north toward Albany and western New York. The Hudson Valley may be a shiny touristic jewel in New York State's crown, but this is a region that just keeps on giving.