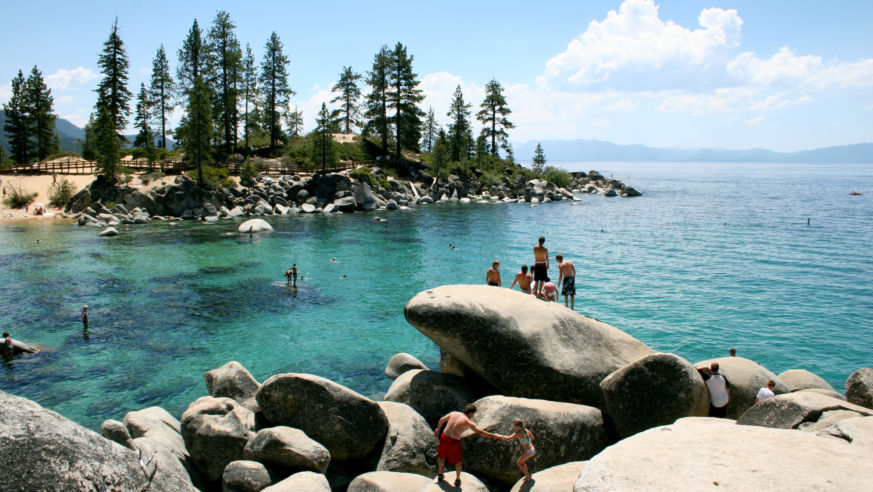 The one-lane state-park road I was driving in northern California threads cautiously for a half-dozen miles through a towering forest of coast redwoods, the tallest trees - the tallest living things-on earth. Here and there, it edges so closely between the ancient giants, some of them more than 1,000 years old, that I feared scraping both sides of the car. These stately redwoods surely qualify as a natural wonder; they certainly awed me thoroughly. But would I and my car make it unscathed to the end of the road, nosing erratically as it does through the shadowy canyon formed by their massive trunks? I had my doubts. By any measure, this short woodland path through the redwoods is extraordinary. And yet it was only one of many bedazzling sights and experiences I enjoyed on an economical, 1,200-mile drive recently that took me north from San Francisco along California's rocky coastline to the Oregon border and back south again by way of winding roads through the soaring Cascade Range and Sierra Nevada. My surf-to-summit route, one of America's most spectacular drives, is a scenic treat from beginning to end. But don't figure a great trip like this is going to bust your budget. You can see it all for yourself for much less than you might expect.

As a onetime Californian, I plotted the drive to show my wife Sandy five of my favorite places. For me, "favorite" usually means somewhere in the remote countryside. So we headed for a sprawling, semi-wilderness region of state-and-federal park and forest lands, where lodging and dining prices tend to be very affordable. Along the way, I found many low-priced rooms that boast lovely water or mountain views. Indeed, a couple can stay in a historic, pine-shaded lodge at Lake Tahoe, one of California's most popular High Sierra retreats, for as little as $44 a night midweek during peak summer season. You might catch a glimpse of the sparkling blue lake from your balcony. Just down the road a few minutes on the Nevada side of the lake, a gambling casino advertises nightly "All-U-Can-Eat" buffets for $6.99, featuring ribs on Monday and steak on Tuesday.

We're both hikers, so we broke up the drive by taking exciting day hikes. At Point Reyes National Seashore, we walked through groves of fragrant eucalyptus to a wave-splashed cove where portly sea lions frolicked among the rocks. At Mount Shasta, a 14,162-foot-high, Fuji-like volcanic cone tipped with snow, we wandered through fields of multicolored wildflowers. A maze of cliff-side paths tempted us in the coastal village of Mendocino, a logging town turned artists' colony. None of these hikes added a penny to our budget.

Several times, we stopped at roadside beaches to wade in the chilly Pacific surf or investigate the squirmy marine life of tidal pools; no charge for this either. Once we watched a small whale swim past just offshore, its blowhole spouting as it glided slowly north. A terrific show, and all for free. Often we picnicked beside a tumbling stream - lunch al fresco with a million-dollar view for the price of a hunk of cheese and crackers from a local market. Now and again, a no-fee swimming hole beckoned.

An Internet check indicates that auto rentals in August, peak vacation time, are least costly at San Francisco. Dollar (800/800-4000) quoted a weekly rate of $116 in mid-August for an economy car with unlimited mileage. At San Jose, the airport's lowest rate was from Payless (800/729-5377), at $116 a week. At Oakland, the best I could find was $150, quoted by Dollar. Balancing airfares against car rental rates, San Jose may be the airport for budget travelers in summer.

On the road, I suggest budget-priced lodgings at each of five overnight stops. In summer, advance reservations are advised, but if you go without, you will spot inexpensive motels and lodges dotting most of this route. Somewhat isolated, they should be open to price-dickering. Room rates below are for two people per night (except where noted) during the summer high season.

I chose this route for its magnificent scenery. Few drives anywhere treat you to so much for so little.

You may want to keep a swimsuit handy as you drive up the coast, although Northern California's beaches invite exploring rather than swimming because of frigid water and treacherous currents. (Summertime can also be foggy; September and October tend to be the sunniest months.) A case in point is Point Reyes National Seashore at Olema, a sprawling, semi-wilderness park that encompasses forests of wind-sculpted pines, lofty precipices, hidden valleys of ferns and huckleberries, rolling grasslands, and yes, miles of empty, wave-swept beaches. I've sunned myself on these sands, only braving the surf up to my knees. There's no charge to enter the park.

On my latest visit, we opted to hike the mostly easy Bear Valley Trail, an eight-mile (round-trip) path that meanders through eucalyptus woods and broad meadows to an arched rock beside the sea. Sea lions played, and cormorants dove for dinner. As a short alternative, the ominously named half-mile Earthquake Trail leads to where the great San Francisco earthquake of 1906 began. Markers show where the land suddenly shifted 16 feet.

The Point Reyes Lighthouse, clinging to a rocky cliff, is reputedly one of the windiest and foggiest places on the West Coast. Find out for yourself by descending the 300 steps to its exposed perch. On the left is Drakes Bay, named for Sir Francis Drake, the English adventurer who sailed into the bay aboard the Golden Hind in the summer of 1579. Presumably he carried a heavy jacket, which you should also keep handy on this drive.

Details: From San Francisco, take State Route 1 across Golden Gate Bridge to Point Reyes, about 50 miles. En route, take in the giant redwoods at Muir Woods National Monument, made famous in a scene in Hitchcock's Vertigo. A few miles later, go for a dip at three-mile-long Stinson Beach, a local favorite. For bare-bones lodging, stay in the park at the 44-bed Point Reyes Hostel, overlooking a secluded valley (415/663-8811), for $16 per bed. Just outside the park in Inverness, the 35-room Golden Hinde Inn and Marina sits waterside on Tomales Bay (415/669-1389), running $90 per room weekdays/$139 weekends with breakfast. Just up the highway, the eight-room U.S. Hotel in Tomales (707/878-2742) lists a weekday rate of $99 per room but invites on-site bargaining. Better yet, try the 16-room Bodega Harbor Inn (707/875-3594) for $60 per room. It's 20 miles north in Bodega Bay, made famous in another Hitchcock flick, The Birds. Dine just outside the park in Point Reyes Station at the Station House Café (415/663-1515); a large lunch bowl of black-bean-and-turkey chili with grilled corn bread is $6.50. Information: Point Reyes (415/464-5100, nps.gov/pore).

Mendocino Bound for Mendocino, Route 1 snakes alongside sheer cliffs, plunging back down to a series of public beaches - among them 16-mile-long Sonoma Coast State Beach. Twisting in tight curves that drop the speed limit to 15 mph in places, the two-lane road passes countless small, rock-filled coves, hurdles deep gulches, and tunnels through thick woodlands. Waves fling themselves in fury against the rocks, shooting geysers of spray into the air. It's a nonstop spectacular the entire 135 miles from Point Reyes. The reward at Mendocino is a picture book New England-looking village with the prettiest front yard in America.

Seafarers from the East Coast settled here in the nineteenth century, building solid Cape Cod and gabled Victorian homes, now beautifully preserved. The "front yard" is Mendocino Headlands State Park, a grass-covered bluff wrapped around three sides of the town as a protective greenbelt. From Main Street, the park stretches across open meadows to rocky bluffs where we stood high above the crashing surf. Afterwards, we browsed the art galleries, where coastal-themed paintings were reasonably priced. Three out of four residents (pop. 1,000) are said to be working artists, drawn by the gorgeous setting and radiant light.

Height, whether possessed by humans or trees, is imposing. Driving (and strolling) among the giant coast redwoods of Redwood National Park and three adjacent state parks, I was thoroughly awed. Many visitors liken a redwood grove-mighty trunks and overhanging branches forming a forest room-to the interior of a cathedral with its lofty arches and similarly muted light. Albeit a cathedral with a very leaky roof. In summer, morning fog often wraps a protective cloak around these giants, which thrive on the moisture. Trees can grow to 300 feet, as tall as a football field is long.

The 215-mile drive from Mendocino to the park tunnels inland for awhile through several redwood groves before returning to the coast. Be sure to take the "Avenue of the Giants," a 30-mile alternate route north through Humboldt Redwoods State Park that is just a taste of the majestic redwoods ahead. At the park, headquartered at Orick, hike the easy milelong loop trail through the Lady Bird Johnson Grove, dedicated to the former first lady. The needle-strewn, spongy-soft path winds through a garden of mosses and ferns flourishing under the redwoods.

Afterwards, test your driving skills, as I did, among the redwoods on narrow Howland Hill Road in Jedediah Smith Redwoods State Park. Happily, I made it with no damage to me, the car, or the trees. Swimmers love the warm water of the Smith River flowing through the park.

Just shy of the Oregon border, our drive leaves the surf behind and heads for the summits, at the same time nosing south back toward San Francisco. In seemingly nonstop curves, the road - good, but lightly traveled - traces the path of the Trinity River, crossing the remote and rugged Klamath Mountains to Mount Shasta. Cool off in the river along the way as you anticipate your first view of one of the world's most majestic peaks. Only a few other mountains - Japan's Mount Fuji, Africa's Kilimanjaro - dominate their setting as mystical Mount Shasta does. A dormant volcano in the southern Cascade Range, it stands alone, unchallenged by any neighboring peak. Many locals swear the legendary mountain is regularly visited by UFOs.

Park your car high on its shoulder at the tree line and hike the rocky path toward the summit a mile or two for a grand panorama. Drop back down to the base for a swim in little Lake Siskiyou ($1 per person). For $10 each, we savored a wood-burning sauna and a cold plunge into a mountain stream at nearby Stewart Mineral Springs (530/938-2222), a rustic, clothing-optional spa. In California, I do as the locals do. There are two-person tepees for $24 or campsites for $15 a day.

On this drive, every day brings stunning new sights to refresh the spirit, an incalculable benefit shared by budget and luxury travelers alike. I doubt anyone can gaze on Lake Tahoe - one of the largest, highest, deepest, loveliest (and coldest) mountain lakes in the country - without beaming in pure pleasure.

The lake provides very diverse ways to spend your time here - as a 72-mile drive around it proves. No wonder it's remained popular with Californians for skiing on adjoining mountains in winter, and waterskiing and fishing in the summer.

On Tahoe's more rustic North Shore, the road edges the lake beneath dense groves of massive Douglas fir trees. Public beaches tempt swimming (brrrrr!), or you can tube on the warmer Truckee River flowing out of the lake. Sandy and I stopped for an easy five-mile lakeside hike around Emerald Bay. On the South Shore, thick woods give way to glittery gambling palaces at Stateline in Nevada.

Of my five favorites, which is best? I can't decide. But if you take this drive, you surely will agree with me that Lake Tahoe does just fine as the grand finale.