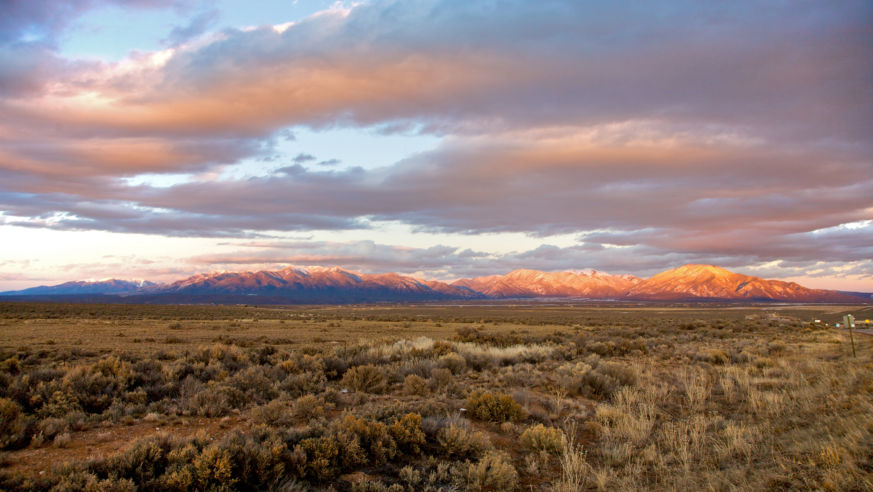 The beauty of northern New Mexico's high deserts and mountains enchanted artist Georgia O'Keeffe when she first visited Santa Fe and Taos, and she made this majestic landscape her home-and the subject of many of her paintings-for almost the last four decades of her life. Ah, Georgia, I thought repeatedly as I recently toured what fans like me now call "O'Keeffe Country," if only I could sta y on as you did. Futile dream that one, but at least I got to live it for a few days. And you can, too. Although Santa Fe and Taos rank today as highly sophisticated arts-oriented communities, they prove surprisingly easy on the wallet. Except for the celebrated stars, many painters, sculptors, and other artists tend to struggle on modest incomes, I've been told. As a result, visitors can find quality lodging and dining at budget rates. For all its ritzy appeal, New Mexico counts as one of America's cheaper vacation places.

Figure on paying about $45 to $60 a night in summer to rent a double in a name-brand motel and under $10 per person for a heaping dinner plate of tacos, enchiladas, and other Mexican dishes savored in the Southwest. Much of the art-as intriguing as it is fun-can be viewed for free in dozens of galleries in both towns. On a recent Friday night in Santa Fe, my wife and I went gallery hopping, sipping complimentary champagne or ginger ale and nibbling hors d 'oeuvres at a series of public art-show debuts. For an hour or two we felt like locals, chatting with the artists and gallery owners.

A resident of New York in her younger years, O'Keeffe learned to drive when she moved to New Mexico, turning her car into a mobile studio. To aid you in seeing the settings she captured on canvas-pink rock cliffs, adobe churches, the Ghost Ranch-what follows here is a relaxed, four-day, 475-mile driving tour that focuses both on O'Keeffe Country's vibrant cultural wealth and the scenic grandeur that captivated her. This is a trip for art lovers in a rugged land that also draws lots of hardy backpackers, mountain bikers, and white-water enthusiasts.

In O'Keeffe's footsteps, you will have a chance to watch expert pottery makers at work on Pueblo Indian reservations scattered along the famed Rio Grande River. At Bandelier National Monument, ascend a lofty Pueblo-style ladder into the cave dwelling of the ancient Anasazi, predecessors of the Puebl o people. In the village of Abiquiu, join an escorted tour of O'Keeffe's home, studio, and garden, kept as they were at her death at age 98 in 1986. In Santa Fe, walk half-mile-long Canyon Road, perhaps America's densest concentration of art galleries. Giant outdoor sculptures-the odd, whimsical, and realistic-line the way. (I've been amazed by a sculpture garden filled with massive metal bugs.) In Taos, try your luck at the slot machines at Taos Mountain Casino, operated by the Taos Pueblo. The nickel bandits can't do much damage to your wallet.

In my mind (and surely O'Keeffe's), northern New Mexico's summer climate-sunny, dry, and mild-is almost reason enough to go, or to settle in as she did. When you're calculating costs, this bonus treat is free.

June lodging rates tend to be slightly cheaper than rates in July and August. Last-minute bookings shouldn't be a problem, except during special events such as the annual Santa Fe Indian Market in late August. Most budget properties are a five- to ten-minute drive from the historic district. But in little Taos, parking is free on side streets. In Santa Fe, municipal lots charge $1.20 an hour; maximum, $6 a day.

Museum and pueblo entrance fees can mount up. Most charge $5 to $10 per adult, though some are less. The heftiest fee ($22) is for a tour of O'Keeffe's home in Abiquiu.

Day one: On the road

Skilled pottery makers, the Acomas encourage outsiders to visit Sky City, where many market their craft. But you can enter only in small, hour-long group tours (505/552-6604; $10 adults, $6 children). Once, only guarded secret trails ascended the heights; today, a paved road from the visitors center climbs in steep curves, and outsiders are escorted up in a small bus. But at tour's end, the sure-footed are invited to descend one of the old paths. Acoma pottery is noted for its extreme thinness and for the intricate geometric designs painted in black, red, and shades of orange. If the prices are too hefty, indulge instead in a big pumpkin cookie homemade by a villager.

The stop at Acoma introduces you to one of the native peoples of New Mexico. Now double back through Albuquerque to Santa Fe to meet the cultures that moved in on them. First came the Spanish, who founded Santa Fe in 1607 (13 years before the Pilgrims stepped onto Plymouth Rock). Mexico wrested the trading post from Spain in 1821, and the United States snapped it up in the Mexican-American War of 1846. The cultural mix is credited with sparking the city's artistic vitality.

Set at 7,000 feet at the base of the pi-on- and juniper-clad Sangre de Cristo Mountains, Santa Fe is one of this country's prettiest cities, and yet it looks absolutely foreign-a blend of Pueblo adobe, old Mexico, and the Frontier West. You can wander the meandering streets for hours (and for free), absorbing the wonderful architectural details. Look for lovely, hand-carved wood doors, graceful arched gateways, tiled fountains, and color-filled flower gardens tucked behind pink adobe walls.

Spend what's left of your first day exploring the bustling, gallery-lined streets around the Palace of the Governors, which overlooks the Santa Fe Plaza. Built by the Spanish in 1610, the elegantly simple Palace is believed to be the oldest building in the country in continuous public use. Once it housed the Spanish governor; now it is a museum of Southwestern history (105 W. Palace Ave., 505/476-5100; $7 adults, children under 16 free). Dozens of tribal members sell their crafts daily from beneath its portal. Handmade pottery can be pricey, but we recently bought a delightful little bowl from a Jemez Pueblo potter for just $40. By law, crafts sold under the portal must be authentic.

Day two: A world of art

But first, check out the major museums. Near the plaza, a must for O'Keeffe fans is the Georgia O'Keeffe Museum (217 Johnson St., 505/946-1000; $8 adults, children under 17 free), America's first museum dedicated to the work of a woman artist. You will see some of her most famous works, including Jimson Weed, a white blossom that fills the canvas. My favorite museum, though, is the fun-filled Museum of International Folk Art (710 Camino Lejo, 505/476-1200; $7 adults, children under 17 free) on Museum Hill, a short drive from the plaza. The world's largest collection of folk objects, it features a colorful miniature Mexican village-cathedral, train station, marketplace, and dozens of little townsfolk-all crafted by noted potters. Take the youngsters to this one.

Near the plaza, save at least an hour for a stroll up Canyon Road and its dazzling array of outdoor sculpture. End the day with dinner at the Cowgirl Hall of Fame (319 S. Guadalupe St., 505/982-2565), a down-home barbecue place with plenty of Southwestern spice. The bourbon-splashed salmon plate is $9.95.

Out of your price range? Mine, too, but you'll find small pieces by other, less prestigious San Ildefonso potters for under $100. Even if you don't buy, you can me et them in their workshops, which in most cases is in their home, and watch them at work. First pay the parking fee at the visitors center (505/455-3549; $3 per car), and then pick up a map for a walking tour. You are welcome to enter any home or shop with a "Pottery-Open" sign on the front. You will be treated like a guest.

Then it's back in the car and on to the Anasazi ruins and caves at Bandelier National Monument ($10 per car). They are set deep in narrow Frijoles Canyon, which is cut by a burbling mountain stream. You'll clutch the steering wheel as the road suddenly drops over a high ledge into the canyon. A mile-long trail traces the base of the cliff, where Pueblo-style wooden ladders provide somewhat tricky access to the caves. At some points, the route edges between rock walls so narrow you momentarily have to suck in your stomach and twist your hips to slip through.

As you head now for the little village of Abiquiu to tour O'Keeffe's winter home (505/685-4539, ad vance reservations required; $22 per person), you are likely to spot views that you saw in her paintings hanging in the Santa Fe museum. The Pedernal, a lofty mesa shaped like a ship's smokestack, is instantly recognizable. On the hour-long tour of the modest adobe, the sensation is much the same. The guide stops at a courtyard door, holding up photos of O'Keeffe's impressionistic renderings of this very door. A few steps away, a jimson weed bush displays its exuberant white blooms; perhaps it was the model for the museum's Jimson Weed. And those elk horns on the wall look familiar.

In summer, O'Keeffe moved 12 miles north to Ghost Ranch, once a guest ranch and now a church-run conference center set on 21,000 wilderness acres. Currently the summer home-owned by the Georgia O'Keeffe Museum-is not open to visitors. But you are invited to drive onto the ranch for a look at the white cliffs and other landscape features O'Keeffe painted. We recently bought a picnic lunch at the Ab iquiu General Store and ate at the ranch under a shady cottonwood.

From Ghost Ranch, take the northern route through Tierra Amarilla to Taos. The winding, empty road cuts across Carson (as in Kit Carson) National Forest, climbing high into the mountains for a spectacular view of the sheer Brazos Cliffs. And then it drops back down onto the desert plateau, where it takes a giant leap across the 650-foot-deep Rio Grande Gorge, a mini Grand Canyon, just outside Taos.

Begin the day with a visit to Taos Pueblo, three miles north of town (505/758-1028; $10 adults, children under 13 free). Tu cked at the foot of 12,282-foot Taos Mountain, the pueblo's two five-story adobe structures-the finest examples of Pueblo architecture anywhere-are believed to date back at least to 1450. Without plumbing or electricity, they remain home to about 150 people. A guide escorts you on a short tour of the grounds; afterward, you can get a peek inside the ancient condominiums by visiting the pottery and other crafts shops on the first floor.

If you visit only one Taos museum, make it the Ernest L. Blumenschein Home and Museum near the plaza (222 Ledoux St., 505/758-0505; $5 adults, $3 children ages 6 to 16). Blumenschein was one of the creators in 1915 of the Taos Society of Artists, a group that began the flow of artists to New Mexico. The adobe home, rooms of which date back to 1731, is fascinating itself as an example of the territorial style. Its walls are hung with examples of the society's paintings-many of them highlighting the same scenes you still see today on Taos streets . The one gallery not to miss is the neighboring Navajo Gallery (210 Ledoux St., 505/758-3250) owned by Navajo artist R.C. Gorman, Taos's most famous and successful artist. His brightly colored canvases of tribal women in traditional dress sell for tens of thousands of dollars.

Make the San Francisco de Asis Church (505/758-2754; $3 adults, children under 12 free) the final stop before heading back to Albuquerque. Located four miles southwest of Taos in Ranchos de Taos, the old adobe church is the subject of countless paintings-the most prominent of which, of course, is one by O'Keeffe. She was awed by its beauty, as I've been, and you will be, too.