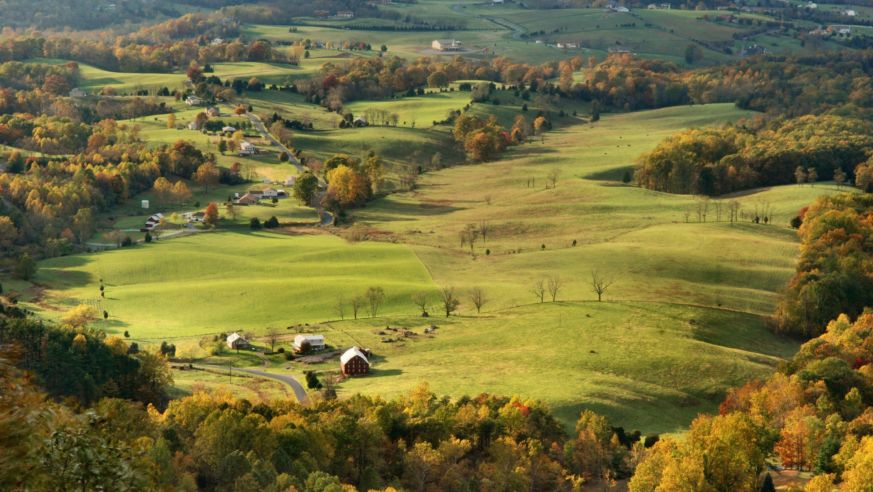 Late afternoon sunlight over rolling farmland in the Shenandoah Valley, captured in autumn at Shenandoah National Park in western Virginia.

Treat yourself to a scenic drive through historic, sight-packed Shenandoah Valley and Shenandoah National Park, Virginia.

Fabled in song and story-remember Shenandoah! the movie (with James Stewart) and Broadway musical?-Virginia's Shenandoah Country welcomes visitors with a full agenda of compelling things to see and do: Civil War history, wine tastings, nineteenth-century villages, cave tours, antiques shopping, a museum filled with colorful Rose Parade floats, tubing on the Shenandoah River, a visit to a gourmet potato chip factory. Happily, many of these activities are free, and the rest won't bust your budget. Similarly, chain motels quoting rates of $55 to $65 for two are plentiful, and you can dine nightly on roast ham, fried chicken, tasty pork barbecue, and other Virginia treats for about $10 per person. Consider this four-day, 450-mile drive a down-home getaway.

By Shenandoah Country, I mean both Shenandoah Valley and Shenandoah National Park. The 110-mile-long valley is tucked between the Blue Ridge Mountains on the east and the Allegheny Mountains to the west. Traced by the meandering Shenandoah River, it is a popular regional playground. The national park embraces a 100-mile stretch of the Blue Ridge, where forested peaks climb above 4,000 feet. On this circle tour, you will drive south through the valley and return north on Skyline Drive, the park's scenic ridgetop road.

A fertile region of farms and orchards set among green, rolling hills, the Shenandoah Valley has played an important role in American history. In the early eighteenth century it was the raw frontier, where a young Colonel George Washington commanded Virginia troops during the French and Indian War. In the Civil War, it became the breadbasket of the Confederacy, feeding General Robert E. Lee's troops until almost the end. General Thomas "Stonewall" Jackson, Lee's valued lieutenant, earned his first laurels defending the valley. Both are buried in Lexington, a pretty Shenandoah Valley college town that today is something of a Southern Civil War shrine.

In a hurry, you can drive the length of the valley from Winchester in the north to Lexington in the south in a little over two hours on busy I-81. But on this trip, we'll stick mostly to U.S. 11, the Old Valley Pike, a lightly traveled, mostly two-lane road that covers the same route at a more leisurely pace. As a city dweller, I often pull over to watch newborn farm animals-calves, colts, kids, and lambs-scampering in the fields.

Fly into one of the Washington, D.C., area's three airports. Generally, the best fares are available into Baltimore-Washington International (BWI) in suburban Maryland, a hub for Southwest Airlines, America's largest discount airline. America West, another discounter, also operates out of BWI. But the most convenient airport is Washington Dulles International (IAD) in suburban Virginia, served by a trio of discount carriers: AirTran, America West, and JetBlue. Discounters ATA and America West fly into Washington's third airport, Ronald Reagan Washington National (DCA), just minutes from the White House and the U.S. Capitol.

This drive begins at Dulles, located less than an hour from Shenandoah Valley. Dulles is 60 miles from BWI and 35 miles from Reagan National. Rental cars average $175 a week at various Dulles counters.

Day one: On the road

From Washington Dulles International Airport to Winchester, Virginia, 60 miles. The drive gets off to a scenic start, crossing through Virginia's affluent horse country. Stately stone mansions stand surrounded by acres of broad green pastures, where aristocratic-looking steeds graze contentedly. Jacqueline Kennedy lived and rode here. To view the rich, stop in Middleburg, the hub of the horsey set. Browse its elegant antiques shops just to see the museum-quality items for sale.

A few miles west, the road (U.S. 50) skirts the little village of Paris and climbs a modest Blue Ridge pass called Ashby Gap. From the summit, you descend into the Shenandoah Valley. In minutes, you will cross the Shenandoah River, which flows rather lazily in summer en route to its confluence with the Potomac River. This drive crisscrosses the Shenandoah many times.

Winchester claims to be the first city established west of the Blue Ridge. At least eight structures in the Old Town district date back to the late 1700s. Among them is George Washington's Office, a log-and-stone cabin preserved as a museum (adults, $5). It focuses on the year 1755 to 1756, when Washington was assigned to protect the western frontier from attack.

Nearby, the white home with a cannon on the lawn is Stonewall Jackson's Headquarters (540/667-3242; $5), a museum detailing Jackson's stay from 1861 to 1862, when his troops fought off Union attempts to seize the valley. Winchester is said to have changed hands more than 70 times during the Civil War.

Country music fans will want to see the home, grave site, and other landmarks celebrating the life of singer Patsy Cline, who was born and raised in Winchester. Pick up free brochures about local area attractions at the Winchester-Frederick County Visitor Center (800/662-1360; 1360 S. Pleasant Valley Rd.).

Still a breadbasket, the Shenandoah Valley markets lots of locally grown produce. But perhaps its most famous edibles are the gourmet potato chips made at Route 11 Potato Chips, a small factory in Middletown, just south of Winchester. The chips are fried the old-fashioned way-hand-stirred in small batches in bubbling kettles. Visitors can watch through the kitchen window (no charge). Samples on Friday and Saturday; best to come before 11 a.m.

On October 19, 1864, Middletown was the setting for the last great Civil War battle in the valley, when the North finally claimed victory. The story is told at the Cedar Creek Battlefield Visitor Center ($5), which overlooks a landscape little changed since then. In the distance stately Belle Grove ($7), an eighteenth-century plantation home, is maintained as a museum by the National Trust for Historic Preservation. You don't have to tour the house to enjoy its magnificent Blue Ridge views. Walk among the gardens and orchards at no cost. Both sites are part of the Cedar Creek and Belle Grove National Historic Park.

Down the road in Strasburg, browse the Great Strasburg Antiques Emporium, where 100 dealers display objects (some expensive, most not) from America's past. My wife frequently snaps up fancy porcelain serving dishes at a bargain. Treat the kids to a swim at Half-Moon Beach Park ($5 adult, $3 ages four to nine, add $2 on weekends), a 16-acre rock-quarry lake in the woods with a five-acre white-sand beach. It's the Strasburg swimming pool.

On to Edinburg, home of Shenandoah Vineyards. In recent years, Virginia's more than 70 wineries have begun winning raves for quality vintages. Judge for yourself at the vineyard's rustic tasting room, a red barn in the midst of 40 acres of grapevines. I stopped recently to sample a fruity Chardonnay and the offbeat Shenandoah Ruby. No charge for tasting, and the view is grand.

Now it's the youngsters' turn for fun again. Take them to American Celebration on Parade ($8), a massive museum of famous parade floats located south of Mount Jackson. The museum displays 27 huge floats, all but three of which appeared in the Rose Parade in Pasadena, California.

I'm a Northerner, and my sympathies do not lie with the Confederate cause. This said, I can admit that I came away touched by the story told at the New Market Battlefield State Historical Park ($8) in New Market. On May 15, 1864, a band of 247 teenage cadets, hastily assembled at the Virginia Military Institute in Lexington, charged an attacking Union line and helped win a Southern victory. The Visitor Center movie, Field of Lost Shoes, which focuses on the death of one young Confederate hero, is especially poignant.

Enough sightseeing for the day? Relax and enjoy the scenery as you cover the remaining 75 miles to Lexington. En route, take a look at Staunton's beautifully restored nineteenth-century town center. And connect here to Virginia Route 252 to Lexington, one of the valley's loveliest roads. A twisting, two-lane pathway, it tops a series of rolling hills, yielding a view of farm-country America as beautiful as you could hope to find. Every turn presents a landscape worthy of a painting: a grand old farmhouse on the far hilltop; a tall, brick silo looking worn but solid; bales of hay rolled up in the fields; a pasture of Black Angus cattle knee-deep in lush, green grass; lots of sheep, of course; Moffatts Creek tumbling by the roadside; and thick stands of trees, where the branches reach across the road to form a shimmering tunnel in the sunlight.

Spend the morning touring Lexington on foot. Pick up a map at the Visitor Center (106 E. Washington St.).

Visit Robert E. Lee's tomb at Washington and Lee University, where Lee served as president after the Civil War, and the Stonewall Jackson House ($5), which Jackson bought when he was a professor at Virginia Military Institute. Pay your respects, too, to their famous horses. Lee's horse Traveller is buried on the grounds of Washington and Lee; Jackson's mount, Little Sorrel, stands as if alive at the VMI Museum. In a glass case nearby is the raincoat Jackson was wearing when he was accidentally shot. Look for the fatal bullet hole below the left shoulder.

From Lexington, begin the return trip north on the Blue Ridge Parkway. We will cover only 20 miles of the famed 469-mile ridgetop parkway, but it's enough to give you a taste of this spectacular drive. Keep an eye open for deer, which are plentiful. Glide down from the mountains on Virginia Route 56 to Vesuvius to visit the McCormick Farm (no charge) in yet another gorgeous pastoral setting. Here in 1831 Cyrus McCormick demonstrated the first successful mechanical grain reaper in the fields near his farm. Tour his blacksmith shop and gristmill, and a museum.

Head back into the mountains at Waynesboro, southern gateway to Shenandoah National Park. The park's 105-mile Skyline Drive was built to show off the scenery. Flowing like a stream among the rocky peaks, it offers grand valley views. Far below, green pastures and golden fields form a patchwork quilt, and the Shenandoah River makes silvery loops.

Skyline tempts motorists to stop at nearly 80 overlooks. That's one way to see the park. The best way, though, is to go for a walk in the woods. About 28 miles into the park, Ivy Creek Overlook provides an opportunity to hike a short, rock-strewn stretch of the Appalachian Trail. You might bump into a bear here, but don't count on it.

Tonight's stay is in the park. At dusk, watch the lights twinkle on in the valley.

From Skyland, drop back down into the valley for one last look. In Luray, consider a one-hour tour of Luray Caverns ($16), which claims to be the region's largest cave. A guide leads the way through cathedral-size chambers of fantastical stone formations. Easier on the budget is the adjacent Garden Maze ($5), a one-acre footpath puzzle formed by eight-foot-tall evergreens.

Save time for a Shenandoah River trip. At Bentonville, 14 miles north, Downriver Canoe Company (800/338-1963, downriver.com) will put you on the Shenandoah in a canoe, rubber raft, kayak, or inner tube. A three-mile, three-hour tube float with shuttle service costs $14 per person. Or plan a picnic at Shenandoah River State Park ($3 per car), which boasts five miles of river frontage. And then head for the airport and home.