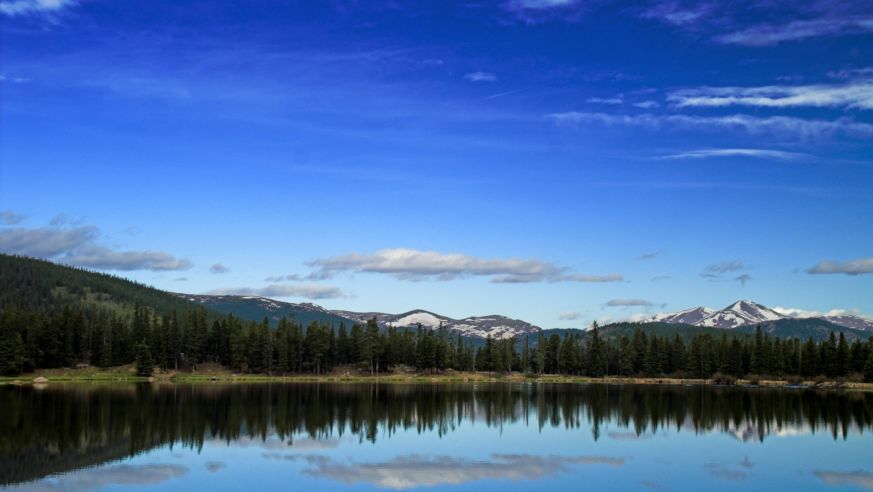 Colorado Mountains and lake in spring with snow

Fasten your seat belts, folks. We're headed into southwestern Colorado's "skyway" country. If you like roller coasters, this is the drive for you.

Fasten your seat belts, folks. We're headed into southwestern Colorado's "skyway" country. If you like roller coasters, this is the drive for you. Edging potentially perilous drop-offs, the roads we'll navigate soar, plunge, and twist in tight curves mile after mile. Many of you are apt to get a bit rattled (I always do). But the reward is some of the most spectacular mountain scenery in America.

Fortunately, you don't have to pay theme park prices for the scenic thrills. This roller-coaster adventure-a four-day, 1,000-mile excursion into the massive San Juan Mountains-definitely rates as budget travel. Expect to pay from $50 to $80 a night in a good chain motel. And dine cheaply on the local ranch-house staples: juicy prime rib and sizzling grilled steaks.

A range of the Rocky Mountains, the San Juans boast more than a dozen peaks that rise to above 14,000 feet. Sprawling across 10,000 square miles, they make a majestic but sometimes intimidating realm best seen on a 233-mile loop called the San Juan Skyway. An officially designated U.S.D.A. Forest Service Scenic Byway, it climbs in dizzying switchbacks over 11,008-foot Red Mountain Pass-the high point on the loop. In late spring when I last tackled the ascent, the summits around me were still cloaked with snow.

Break up the drive with plenty of outdoor action. Hike, bicycle, go white-water rafting or kayaking, fish, ride a horse, try rock climbing. This is the place for it.

Another incentive to book into Denver is that car-rental rates there tend to be cheaper. Using the Internet, the least expensive rental I could find in Montrose cost about $40 more a week than a similar rental in the Colorado capital. Many of the rental agencies in Montrose impose a mileage limit, which also might have added to my cost. For a one-week, midsummer rental of an economy-class car out of Denver, the various national car-rental brands quoted between $150 and $200 (with unlimited mileage). (Lodging rates below are for two people for one night during the peak summer season.)

Denver via Glenwood Springs to Grand Junction, 265 miles. As your plane descends into Denver, take a look at the peaks rising west of the city-in about an hour, that's where you'll be!

Usually I try to avoid interstates, but I-70 treats you to a dazzling introduction to the Rockies. About 60 miles west of Denver, the highway climbs to above 11,000 feet as it passes through the Eisenhower Memorial Tunnel, reputedly the highest auto tunnel in the world. Beyond is the famous ski resort of Vail; stretch your legs as you stroll along its ersatz alpine streets.

I-70 snakes alongside a number of tumbling streams, but it's the Colorado River that puts on the best show as it races for a dozen miles through the steep rock walls of Glenwood Canyon. A thrilling drive; you can almost imagine you're bouncing down the river on a white-water raft. Take another break at the giant hot-spring pool (adults, $13) in the center of Glenwood Springs, a bustling resort town.

Flat-topped mesas line I-70 as it follows the Colorado River down the western slope of the Rockies to Grand Junction.

Grand Junction via Montrose, Telluride, and Cortez to Mesa Verde National Park, 270 miles. A 2,000-foot-high mesa, cut by deep canyons, towers above Grand Junction. This is Colorado National Monument ($5 per car), a landscape of sculpted red rock. Rim Rock Drive edges the mesa, yielding panoramic views. Cold Shivers Point is aptly named, you will agree, when you peer into the canyon depths below. Give yourself an hour at the park before heading south to the San Juans.

On the southern outskirts of Montrose, stop briefly at the excellent Ute Indian Museum (adults, $3). Much of Colorado was once the homeland of the Ute tribe, many of whose members now reside on a pair of reservations near Mesa Verde. You will cross Ute paths often on this drive. The early life of these deer and buffalo hunters is illustrated with a first-class display of artifacts, including an eagle-feather headdress, a buckskin dress, and beautiful beadwork. The museum is located on what was the farm of Chief Ouray, who headed the Ute Nation from 1868 until his death in 1880.

To the Utes, the San Juans were "the Shining Mountains." You can see them directly ahead as you leave the museum, an intimidating wall of jagged peaks that seem impenetrable.

The San Juan Skyway officially begins in Ridgway. You can make the loop in either direction; I prefer counterclockwise because this way you ease more gently into the sky-high country.

Counterclockwise, then, the approach to Telluride, a popular winter ski resort, traces the San Miguel River through the deep red walls of a winding canyon. The town itself is tucked near the end of the canyon. Actually, there are two towns here: Telluride, the attractively preserved historic mining town in the valley, and Mountain Village, a cluster of luxury hotels and homes high above town on the resort's ski slopes. They are linked by a free gondola that makes the climb from old to new in 13 minutes. Board one of the eight-passenger cars for a terrific view from the top. The gondola operates daily from 7 a.m. to midnight.

In Telluride browse the offbeat shops housed in ornate Victorian-era brick and wood structures. Hike the easy River Corridor Trail, which meanders through town to a beaver preserve. And then continue for a mile or so to the canyon's end, where Bridal Veil Falls cascades down the cliff into town. Afterward, enjoy a reasonably priced sandwich at funky Baked in Telluride.

Out of Telluride, Colorado Route 145 climbs through a chilly, tundra-like landscape over 10,222-foot Lizard Head Pass, named for an odd-shaped pinnacle. And then it drops slowly from the summit, following the splashing Dolores River through rolling green meadows to the desert-like country of Dolores and Cortez.

Stop just south of Dolores at the Anasazi Heritage Center ($3), a museum operated by the Bureau of Land Management. It preserves hundreds of clay pots, yucca-fiber sandals, and other artifacts collected from Anasazi villages.

Now on to Mesa Verde National Park ($10 per car). Steep switchbacks climb from the Montezuma Valley to the top of the green mesa at about 8,500 feet. This was home to many Ancestral Puebloans from about a.d. 550 to a.d. 1300. Surely they were as awed by the distant views from this elevated perch as I always am.

The two most impressive ruins are Cliff Palace and Balcony House. To see them, you have to join a ranger-led tour. Tickets for each cost $2.50 at the Far View Visitor Center. Getting in and out of both requires some agility and no fear of heights. The Ancestral Puebloans built their lodgings in nearly inaccessible cave-like ledges on the sides of high cliffs for protection from their enemies. To reach them, tourists do as the Ancestral Puebloans did.

Stone steps cut into the side of a canyon wall descend through a narrow crevice to the floor of Cliff Palace, the largest cliff dwelling in North America. Once it housed 200 people in more than 100 rooms but was vacated in the fourteenth century, perhaps because of prolonged drought. Exiting is a similar scramble. You edge up stone steps through another tight crevice, and then you climb a series of two 10-foot-tall ladders placed one atop the other up the canyon wall. Don't look down.

No tickets are required for a look at Spruce Tree House, which is considered the park's best-preserved cliff dwelling. But you do have to negotiate a steep path down and up. The third largest of Mesa Verde's cliff dwellings, it contains about 100 rooms and eight ceremonial chambers called kivas-a sort of cylindrical pit. You can descend by ladder into one of the kivas.

I like to stay at the park's mesa-top Far View Lodge, which is well named. From my balcony, I watch the lights pop on at scattered ranch houses in the valley far below. On one visit, deer browsed outside my balcony. This time, a pair of wild horses meandered past.

Mesa Verde via Durango, Silverton, and Ouray to Montrose, 160 miles. Spend the morning exploring more of Mesa Verde before heading back into the San Juans. From Durango, the road climbs quickly to Coal Bank Pass at 10,660 feet. Even in midsummer, the air can be chilly. Ahead the cliff's-edge road crests 10,899-foot Molas Pass. On the descent, you can see Silverton far below, set in a small, bowl-like valley.

Once a rowdy boomtown of bars and brothels, the old silver-mining town of Silverton (elevation 9,318 feet) seems rather sedate these days, although it still retains a rough frontier look. Swirls of dust, kicked up by frosty breezes, whip across the unpaved side streets, and Victorian-era wood and brick buildings-housing shops and caf,s-possess a properly weathered look. Overhead, the treeless summits of craggy peaks snag passing clouds.

Silverton is the terminus of the Durango & Silverton Narrow Gauge Railroad (adults, $60), a tourist train that (depending on the season) makes one or more slow but spectacular ascents daily from Durango. Tooting its whistles, the steam engine pulls a string of bright-yellow coach cars. It rolls into the center of town delivering a flood of chattering families who liven things up temporarily.

Steady your nerves now, because the next 23 miles over 11,008-foot Red Mountain Pass to Ouray can make your heart race. Carved out of the side of the mountain, the road carries you in more tight switchbacks from one precipice to the next. Around curves, the speed limit drops to 15 mph; believe me, I am never tempted to exceed this reasonable pace. Recover in Ouray's giant hot-spring pool ($8).

Complete the San Juan Skyway loop in Ridgway and double back to Montrose. If it's still daylight, head for nearby Black Canyon of the Gunnison National Park ($7 per car). The park is named for a deep, dark, and narrow gorge cut by the Gunnison River. Because it is so deep-a drop of 2,000 feet from rim to river-and so narrow, it is wrapped in heavy shadows for much of the day.

From the visitor center, South Rim Road skirts the edge of the manzanita- and sagebrush-lined canyon for seven miles. Sixteen overlooks provide splendid views into the depths, where the pale-green Gunnison splashes in white-water frenzy.

Ahead lies one more climb into the Rockies. In yet more cliff's-edge switchbacks, the road crests Monarch Pass at 11,312 feet. Snowy peaks march into the distance, a year-round winter-like wilderness that is as beautiful as any landscape on this drive.

Back down the mountain, U.S. 50 enters Bighorn Sheep Canyon. Here the road runs for about 50 miles alongside the Arkansas River as it weaves through the narrow rock chasm. A part of the Arkansas Headwaters Recreation Area, this is prime white-water rafting and kayaking country. You will find picnic tables at several key spots ($2), where you can watch the watercraft splash past.

Now head back to Denver, skirting the edge of the Rampart Range. In Colorado Springs, that lofty mountain over-shadowing the city to the west is Pikes Peak. If you've got time, drive to the top for a final sky-high view.