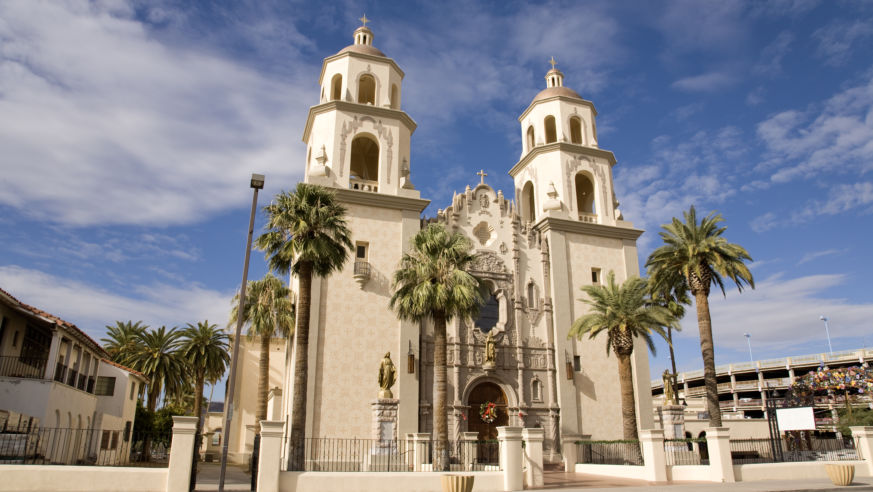 History runs deep in Southeast Arizona, but you don't have to dig to find it.

The heat is like a slap in the face. When my husband and I left the East Coast it was 40 degrees and raining; here in Tucson the temperature is above 90, even though it's late October. Not that Jason and I are complaining. The rental car has A/C and we haven't seen the sun in weeks.

The southeast corner of Arizona is a land of extremes: mountains that top 9,000 feet and are covered in Douglas firs; dry, dusty basins that sprout cacti and seemingly little else. The flavor is a wild mix of the Old West and Old Mexico--from the architecture (wooden ranch houses and adobe casitas) to the food (mesquite-grilled steak and carne asada). Toss in quirky attractions and a 75 mph speed limit and you have a road-tripper's nirvana.

Even though it's Arizona's second-largest city (after Phoenix), Tucson doesn't feel all that big. With a few exceptions, the things you'll want to see are concentrated in and around downtown. We land mid-morning and head straight to Mission San Xavier del Bac. Completed in 1797 and still the center of a functioning Roman Catholic parish, the enormous adobe church can be seen for miles around. Its blinding exterior leaves no mystery as to why it's called the White Dove of the Desert. Upon entering, I'm struck by the serenity: Worshipers and tourists stand in quiet awe, marveling at the colorful murals and statues that adorn each wall, all recently restored to their original beauty.

Back in the car, we head to Pico de Gallo, a little taquería in South Tucson. It isn't much to look at, but the soft corn tortillas are amazing. The namesake dish isn't what you'd expect--instead of watery salsa, you get spears of mango, pineapple, coconut, and jicama served in a Dixie cup and topped with red chili powder and salt. It sounds odd but tastes heavenly.

Nearby in the Barrio Histórico is El Tiradito, a small wishing shrine dating from the 1870s. The ground around it is littered with colorful candles--evidence of the hundreds of prayers offered here in recent weeks. This remnant of the late 19th century stands in stark contrast to the modern convention center a block away.

Downtown Tucson is a warren of one-way streets; you'll want a good map. We circle the Hotel Congress a few times before figuring out there's parking in back. Built in 1919, the hotel served as a high-class rest stop for ranchers and mining tycoons, maintaining its genteel reputation until John Dillinger and his gang rolled into town. They were holed up here in 1934 when a fire broke out. Firefighters recognized Dillinger, and he was captured nearby. The rooms haven't changed much since. They're small, a bit ragged, and the door hits the toilet as you enter the bathroom. But they have character, with vintage beds and rotary phones. Ask for a room far from the popular nightclub or you'll feel the booming music until 1 a.m. No matter where your room is, you'll hear the cargo trains. I found the noise soothing; you might not.

From the hotel it's a short walk to the 4th Avenue shopping district. There are enough thrift stores and import shops to keep you busy for hours. Don't dally too long. Up in the foothills of the Santa Catalinas is the late Ettore "Ted" De Grazia's Gallery in the Sun. Best known for his paintings of children and landscapes, De Grazia created a unique space to show his work: The adobe gallery is decorated with colorful murals, brightly painted tin flowers, and a cholla cactus walkway.

We head over to the El Presidio Historic District for dinner at the oldest family-run Mexican restaurant in the country, El Charro Café. We come for the famouscarne secaplate and aren't disappointed. The beef is perfectly spiced with lime, garlic, and green chilies, and dried outdoors for several days. Shredded and served with fresh tortillas, it's unlike anything I've ever tasted. Except maybe beef jerky, but thecarne secais much better.

As you drive southeast on I-10, the ubiquitous saguaros and mesquite give way to willowy cottonwoods--you're crossing the San Pedro River. After so many miles of highway, the Ghost Town Trail comes as a shock. This unpaved road from Pearce to Tombstone is quite rutted in places and so isolated that you'll be tempted to turn back. Stick with it and you'll pass through remnants of once-booming copper-mining villages.

The best reason to take this route: John & Sandy's Rattlesnake Crafts. John and Sandy Weber are self-described rattlesnake hunters whose wallets and jewelry are on display in an old trailer. The shop is self-serve--if you find something you like (and I defy you not to), drop some money in the mailbox outside.

Compared with the real ghost towns of Courtland and Gleeson, Tombstone is a circus. Packed with tourists and people dressed in period costume, the Town Too Tough to Die is worth only a quick visit. Stop by Boothill Graveyard to see the famous grave markers, then stroll Allen Street and have lunch at the Longhorn Restaurant.

The Mule Mountain Pass into Bisbee is vertiginous--it's a mile above sea level and the highway twists and turns--but the view is spectacular. The town is nestled in a canyon, with clapboard houses stacked on top of one another; it looks as though one good rain will wash all the buildings away. Now a magnet for artists and retirees, Bisbee was once the heart of copper mining in the area, producing nearly 3 million ounces of gold and 8 billion pounds of copper. At the turn of the century, it was the largest city between St. Louis and San Francisco. See proof at the Mining & Historical Museum. Explore the mine as the miners did--with a hard hat and lantern--on the one-hour underground tour of the Queen Mine.

Claustrophobes will prefer to peer into the giant crater that is the Lavender Open Pit instead.Pick up an illustrated map at the visitor center on Subway Street and look for signs of the town's rough-and-tumble history. They're everywhere, from the big houses on Quality Hill (where the bankers and lawyers lived) to the saloons in Brewery Gulch (once home to gamblers and prostitutes). The center of town is now full of art galleries and boutiques, but the facades still scream Old West.We decide to try the new Harlequin Restaurant at the bottom of Brewery Gulch. Chef and co-owner Scott Edelen has turned what was once the town pharmacy into a first-class restaurant. The menu is small--two entrées--but it changes nightly and incorporates fresh local ingredients. Jason swears the steak is the best he's eaten (it's blackened and served with a red-curry coconut-cream sauce).As we make our way downhill, the car turns into a time machine, hurtling us from the early 1900s to the 1950s. Welcome to the Shady Dell. Alongside its regular RV hookups, the Shady Dell rents out eight meticulously restored aluminum trailers as rooms. We chose the granddaddy, a 1951 Spartan Royal Mansion. I can't take it all in fast enough: the lustrous blond-wood interior with leopard-print carpeting; the Frigidaire in the kitchen, along with vintage martini glasses; the phonograph and 78 rpm records ranging from doo-wop to polka. After I squeal, "Oh my God, look at this!" for the hundredth time, we settle onto the couch to watch the grainy black-and-white Setchell-Carlson TV. It's hooked up to a hidden VCR, with a dozen films to choose from. We stay up late watching Rawhide and The Man Who Shot Liberty Valance.

We're off after a late breakfast at Dot's Diner--a 1957, 10-stool wonder, itself worth a trip to the Shady Dell. By late morning we're in Patagonia, another boom-and-bust mining town that has found new life as a mecca for tourists and weekenders from Tucson.

The Nature Conservancy's Patagonia-Sonoita Creek Preserve has over two miles of trail paralleling Sonoita Creek. It's a nice, flat walk under a canopy of trees--a bird-watcher's paradise. More than 300 species have been identified here.

Lunch is at Velvet Elvis: incredible homemade soups, large gourmet pizzas with names like "The Good, the Bad & the Ugly," and limonada rosa, lemonade flavored with hibiscus and lime.

Past Nogales is the village of Tubac, Arizona's oldest European settlement, dating from 1752. The Spanish built a presidio here that's now a state historic park, but most people come for the art galleries and pottery shops.We're lucky enough to have our own guide--Bill Spater, a family friend who has lived in the area for years.

After a driving tour of Nogales's Crawford Street Historic District--on a hill above town, with old mansions and an extraordinary view of the spotlit wall separating the U.S. from Mexico--we "walk across the line." (The border is so porous here that people cross back and forth daily: Arizonans and tourists head over to Sonora for dinner; Mexicans visit Arizona to shop at Wal-Mart.) It's another world: narrow streets lined with shops and bars, people everywhere.

We head down a small side street to Regis, Bill's favorite watering hole. It's packed with locals watching TV. A waiter quickly finds us a place to sit down, adding chairs to a table already occupied by two men. One of them asks me in Spanish who I'm rooting for. They're watching Game Six of the World Series--and Jason and I, lifelong Yankees fans, are surrounded by rowdy Marlins fans.

We have dinner at La Roca, or "The Rock"--a beautiful restaurant literally built into the side of a cliff above town. A mariachi band serenades us with "Guantanamera" as we dig into an enormous platter of grilled shrimp, spiced beef, and roasted chilies.

Tumacácori is about three miles south of Tubac. A national historical park surrounds the ruins of a Jesuit frontier church built in 1757. It's only a short drive back to Tucson, and as we try to figure out exactly how far we are from the airport, we realize that I-19 is signed in metric. Another Arizona quirk to end a memorable trip through the Old West.