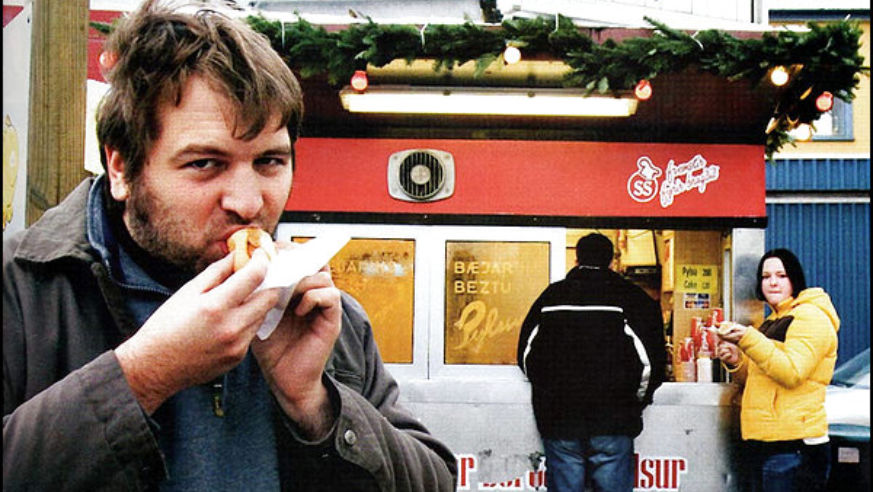 Pizza, bagels, and hot dogs--yes, we're talking about Reykjavik. Winter in Iceland brings a welcome drop in airfares, but the restaurants remain expensive. A resident tells where to go.

Whether it's due to the cost of importing or the lack of competition, nothing comes cheap in Iceland. The idea of healthy living hasn't really caught on, either. Having said that, there are quite a few nice little restaurants, most in the downtown area, that are affordable (at least by Icelandic standards).

An almost life-size James Dean stares at a haunting blonde painted by former punk princess Elly. On the floor above, a painting by Harpa shows death having a drink with friends. But there's more to Eld Smidjan than decor. It has the best pizzas, with toppings from fish to snails. Can't decide? Leave it to the chef, who'll usually whip up something involving cream cheese. From $9 for a 10-inch margherita pizza. Bragagata 38a, 011-354/562-3838.

The name means "corner," appropriately enough, since it's on a corner in the center of town. Reykjavik's oldest Italian restaurant is only 25 years old. But it's still perhaps the best (and the candles on the tables are more than you can say for some places). Look at the blackboard for the day's special, which might be pasta, baked seafood, or panfried saltfish; it comes with soup ($18). The pizzas, calzones, and pastas are nice ($15 to $20), as is the salmon, from a local river ($31). Hafnarstræti 15, 011-354/551-3340.

Nonnabiti is the top manufacturer of batur, or "boats," more or less what more advanced cultures call submarine sandwiches. It closes later than most restaurants here, which means 2 a.m. weekdays and 6 a.m. weekends, so it's a favorite of pub crawlers. (Get a dollar off before 1:30 p.m.) The big, greasy boats have a unique taste due to Nonni's sauce, which he invented--only he and his wife, Björk (no, not her), know the recipe. Try the lamb or fish boat ($10), or a holiday boat, with smoked pork, if you're in around Christmas or Easter. Hafnarstræti 11, 011-354/551-2312.

Graenn Kostur ("green choice") is completely vegan: no sugar, no bleached flour, nothing from the animal kingdom. (Not exactly true--Antonio, a chubby cat thought to resemble a Latin lover, is served dairy products.) Actor Viggo Mortensen stops by on his frequent horse-riding trips. If you're in luck, the day's special ($12) will be a stuffed pepper or, failing that, a spinach pie. A second helping costs $3. Skolavördustigur 8b, 011-354/552-2028.

The Icelandic hot dog is not to be missed, and this stand, "the town's best," lives up to its name. On a sunny day the line stretches down the street. The hot dogs are made mostly from lamb, and if you ask for one with everything ("eina med öllu"), you get mustard, ketchup, raw and fried onions, and remoulade. A hot dog costs $3, but you'll want a pair. Two members of Metallica--James Hetfield and the new bass player--shared seven. Bill Clinton stopped by in August but only wanted mustard. Now you can ask for a Clinton and get just that. Tryggvagata (no street number), 011-354/894-4515.

Owner Frank Sands is originally from Boston but has become a naturalized Icelander; he's lived here for 11 years and is married to an Icelandic woman. He initially taught in a high school in the Westman Islands but has entered the catering business and also started the successful Vegamot bistro and bar. You can get any bagel with regular or flavored cream cheese for $4.50. Included in the price is Wi-Fi access, if you have your laptop. Laugavegur 81, 011-354/511-4500.

Owner Jakob Jakobsson is the first man to earn the title "smörrebröd virgin." Smörrebröd, a Danish invention, consists of bread hidden under a pile of toppings, such as roast beef, herring, shrimp, or gorgonzola. A virgin in smörrebröd terms is, ironically, someone very proficient in the art of making the bread. On summer Saturdays, from 4 p.m. to 6 p.m., the top jazz acts in Reykjavik play in the garden. Half a slice (a lot more filling than you'd think) goes for around $10, a full one for between $18 to $30. Laekjargata 4, 011-354/551-0100.

The name means "three Frenchmen," and 3 Frakkar used to be a French restaurant. When new owners took over two decades ago and turned it into a seafood restaurant, they didn't change the name, because conveniently enough, 3 Frakkar also means "three overcoats." The house specialty is whale. Whaling has been forbidden for 15 years, but the chef has a few frozen from before then. Fin whale is served raw or as a pepper steak. The restaurant also has puffin and guillemot on the menu, and a wide selection of fish. Main courses cost around $35; weekday lunches are roughly a third less (and include soup). Baldursgata 14, 011-354/552-3939.