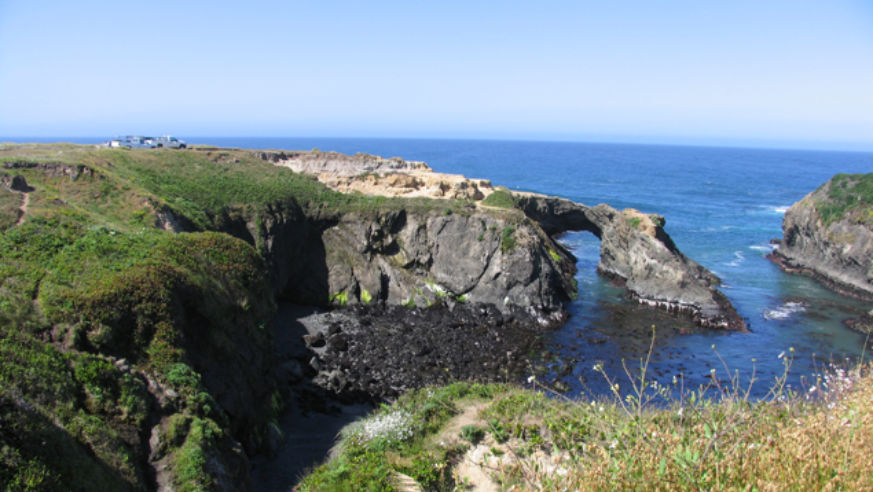 Misty, craggy, and full of Northern California's specific brand of charm, Mendocino marches to the beat of its own drum circle.

As most people who live in San Francisco will tell you, there are an infinite number of things to love about the city. What they might not say is that one of the reasons they love it so has nothing to do with the city proper. It's the easy proximity to the stunning terrain to the north. Not Marin County--which is nice but no surprise--but Mendocino County, where in a matter of hours you can be zooming back and forth between the dramatic coastline and rolling inland hills.

Day one: San Francisco to Boonville

The first tunnel I come to after crossing over the Golden Gate Bridge, five minutes into Marin, is framed with a rainbow painting, nicely reflecting the region's laid-back, eco-friendly leanings. I breathe a little deeper, relaxing to the scent of wildflowers and sage that seeps in through the car windows. In Calistoga, famous for its mineral water and mud-bath spas, I pick up a friend, and we head west on Highway 128. In true Sunday fashion, the drive is glorious. It's sunny, the hills are deep green, and the curves in the road are just sharp enough to keep me engaged but still allow for satisfying speed.

Our first stop is blink-and-you've-missed-it Jimtown. The Jimtown Store, with its vintage Ford ornamentally parked out front, is an endearing pit stop both for road-trippers like us and spandex-clad bicyclists hydrating with fresh lemonade on the benches out front. A tiny counter doubles as a gourmet deli and wine bar, and a tastefully eclectic array of objets de kitsch, craft, and nostalgia are scattered around for sale. Healdsburg, not far west, is far more developed--wineries with boutique-like storefronts, upscale clothing stores, and a tree-shaded town square that's often the site of alfresco art fairs. We have a lunch of fancy sandwiches and strawberry aguas frescas at the Oakville Grocery.

Once home to apple orchards, the area is equally suited to grape growing, and the linear rows of vines appear with greater frequency the deeper we venture into Anderson Valley. It doesn't take long to reach Boonville, our first overnight stop. In fact, we arrive so soon that we haven't quite gotten our fill yet, so we forge ahead a few miles to Philo (population 400) for a bit of wine tasting. In contrast to the larger, corporate-owned Napa vint-ners, the wine business here is in the hands of families and individual owners, and we're pleasantly surprised when the proprietors don't charge us. We begin with reds at Brutocao Cellars, and then at Navarro Vineyards--highly recommended by a sommelier-wannabe friend--we expand to include whites. The pourer is approachable and knowledgeable, and the patio has a fantastic view of the flourishing vines. I'm so impressed that I buy three bottles.

Outside the entrance to Hendy Woods State Park, we encounter a cluster of buildings called the Apple Farm. There's a stand selling ice-cold organic apple juice, three rustically chic cottages (they rent for a little more than we want to spend), and a cooking school headed by Don and Sally Schmitt, the former owners of the famous French Laundry restaurant in Yountville (which they sold to Thomas Keller in 1994).

The Boonville Hotel, run by the Schmitts' son Johnny, is a tasteful update of an old roadhouse. The fresh touches in the room include geometric-print bedspreads, designer mint-green walls, and aromatic lavender in a vase on the side table. After a few glasses of wine in the flower garden, we're happy to discover that the hotel has a well-regarded restaurant on the ground floor. We're less happy that the three-course prix fixe and a glass of wine cost almost as much as the weekday rate for one of the rooms. But we enjoy our dinner just the same, and the quiet of the evening allows for a night of uninterrupted sleep.

The road toward the Mendocino coast winds through the lush forest of Navarro River Redwoods State Park, where the air develops a chill. As in San Francisco, the climate is generally cool but punctuated with rare crystal-clear days that are close to perfection. (I'd find it significantly more refreshing if I weren't wearing flip-flops.) Our first sight of the Pacific Coast is when it's blanketed in atmospheric fog. What we can see: steep, craggy cliffs, crashing waves, and Victorian buildings with shingles hung out offering respite from the bracing outdoors. Here, B&Bs have their own official highway markers--with a little icon of a house--to help travelers find their way.

We drive past entrances to numerous state parks and beaches, misty views lending a bit of drama. Twenty minutes past the turnoff to Mendocino--we'll come back to that later--is Fort Bragg, a working-class coastal town with a remarkable array of musty shops selling 20th-century bric-a-brac. This is also the place to board the Skunk Train, a logging railroad turned into a tourist attraction. On the main drag, we stop at a hole-in-the-wall called Eggheads. Omelets, appropriately, are the highlight of the menu; less appropriately, the room is done in an elaborate Wizard of Oz theme. Still, I can't resist ordering the Wicked Witch Burger, which lives up to its name in spiciness.

Having been sequestered in the car long enough, we switch to exploring on foot. Our first stop is Glass Beach, a former city dump, where broken bottles have been worn down by the sea into glistening, colorful, translucent pebbles. We hike a few short trails at MacKerricher State Park, three miles north of town, then return to Mendocino.

Mendocino is a quaint mass of old Victorian-style buildings perched on a cliff. We arrive just as the sun is setting, and the early evening streets bustle with visitors of all ages and styles. At MacCallum House, a stately hotel, it's possible to people-watch in the bar/café while having a dinner of tasty appetizers. We're staying at the Sweetwater Inn & Spa. Rooms at the inn and the spa include use of a communal hot tub, which we learn is clothing optional. After spending an hour or two in this New Agey town, frankly, I'm not surprised. We upgrade to a private tub. By 10 p.m., the streets are deserted. I sleep like a baby--that is, until I'm awakened in the middle of the night by the exotic beat of bongo drums thumping in the distance.

We grab sandwiches at the Little River Market (which, for some reason, is attached to the post office) and take them to one of the tables in the back, where there is a splendid ocean view. A couple of minutes south is Van Damme State Park's Pygmy Forest, a romantic name for a natural aberration. Here,  cypress, pine, and other trees only grow to a stunted height, due to the mineral-challenged soil. It's a bizarre, understated spectacle. Trees that look like they should be towering above us are just my height.

Next stop, Gualala--pronounced "wah-la-la," FYI--and the St. Orres hotel, where we're staying. It's difficult to miss, as the building looks like some kind of Russian Orthodox fantasy, all cedar and stained glass. Deer and wild turkeys peacefully graze on the hillside nearby. The main structure has eight rooms and a restaurant, but we're issued a spacious and secluded cabin a few hundred feet up the road.

Tuckered out from canoeing, we stick close to home for dinner. The restaurant's menu, which we thumbed through in the cottage, suggests you can order hearty pastas and appetizers, but the actual experience is more formal--and pricey-- than we were bargaining for. So we make do by ordering an assortment of light appetizers--tiny morsels of baby abalone with seared scallops, a savory wild mushroom tart, garlic flan, and a salad. It's delicious and just about enough to tide us over for the night.

Which is not to say we don't make a few more stops. The upscale Sea Ranch resort community has award-winning '60s modernist architecture by William Turnbull and others. The houses are clustered in private enclaves with no-trespassing signs, but there are public walks along the beach at the Sea Ranch Lodge. In Bodega Bay we veer inland, passing the locations for Alfred Hitchcock's The Birds and then the Christo and Jeanne-Claude Running Fence Historic Park, a tiny spot of green that commemorates the artists' 1976 art installation. (The 24.5-mile-long curtain of fabric wound its way from Cotati down to the sea.) As parks go, it's not much. But it drives home the point that this area is full of lovely surprises.