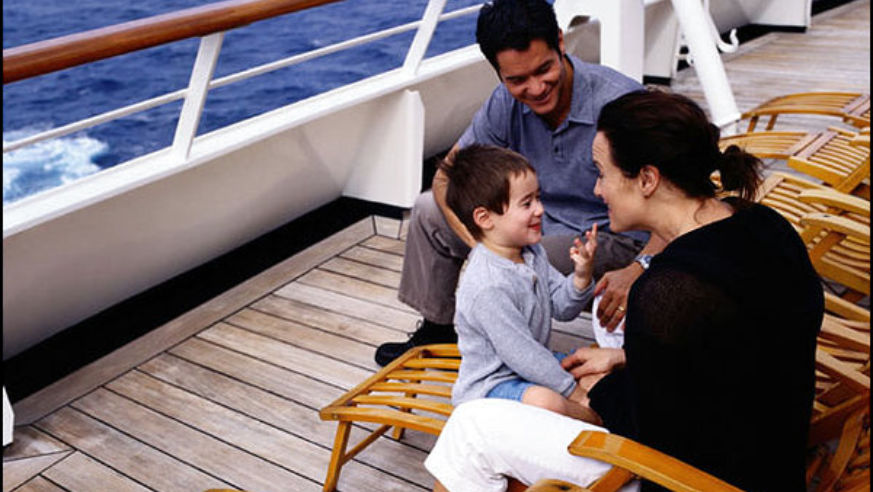 Getty Images
Feeling tentative about cruising? Book a three-to-four day sail, a less costly option that enables you to sample ocean life and convince yourself that you really can stomach undulating waves

So many ships, so many destinations! It isn't easy finding the right mix of amenities, ports and costs

Before our first cruise, my husband and I wondered whether seven days in the same cabin with our children was sane or sadistic; if the kids could forgo T-shirts and sibling rivalry at our formal dinner seatings; and if we'd return fat, bored, and broke. Instead, we had one of our best vacations ever.

Since then, more than eighteen years ago, we've been on many cruises together. Cruising's not perfect--the ports get flooded with "boat people," shore tours can be expensive, and the food can be mediocre--but being on a ship frees us from the usual family nemeses: packing, unpacking, schlepping suitcases and dealing with cranky children in a hot car.

"Cruising is a very easy way to travel," says Barbara Koltun, a Potomac, MD clinical social worker. "Life is simple and fun. All you have to do is pick your shore tour. The rest is taken care of. You do not have to worry about what the evening's entertainment will be or how much dinner will cost and there's something for everyone to do." Last summer the Koltun's sailed to Alaska with 13-year-old Sarah and her grandparents.

Like many cruisers Wayne Poverstein, a Morris Plains, NJ, high school teacher appreciates the freedom cruising affords parents and kids to do things together and apart, including eating. "Kids can get whatever they want to eat whenever they want it. Most of the time on a cruise, Shaun, at 12, 14, and 16, didn't want to be stuck in a 1 ½ to two hour dinner with us. He was interested in eating hot dogs and pizza with his new friends. And that was fine with Mary Jane and me."

It's no wonder that the family market, according to the Cruise Lines International Association (CLIA), has grown nearly 200 percent in the past five years. In 2004, CLIA projects that 1.1 million children, age 17 and younger, will have sailed, up from 1 million in 2003.

But to sail on the ship of your dreams, plan ahead. You need to pick the voyage as well as the vessel that's right for your family. And so that you don't go overboard on your budget, you need to book wisely, choose shore tours carefully, and be mindful of all the extra ways cruise lines in recent years have come up with to separate you from your dollars.

Part of cruising's allure is getting what you wish for, so be honest about practical issues and whether your family prefers sand and sun, rainforests, glaciers or European capitals with 17th century churches.

Caribbean cruises work well for all ages, especially with tag-alongs tots or teenagers. Give a pail and shovel to a 2-5-year-old, sit him on the sand near the water's edge, and he can dig and play for hours. Give a teen some dollars to try WaveRunners, and parasailing, and she'll be back to beg for more money before you've even read three pages of your novel.

Caribbean and Scandinavian cruises can be budget-stretchers because you can forego the cost of organized shore tours and still have fun. In Jamaica, Aruba, Curacao, and other islands, simply take a taxi to a nearby beach. In Copenhagen, Oslo, Stockholm, and Helsinki the ships dock within an easy walk or short cab ride to the city center, making it easy to stroll, window shop and find the museums. Most lines also run either complimentary or inexpensive shuttles to town.

European/Scandinavian capitals, however, go over best with history-oriented pre-teens and teens. They tend to like browsing the boulevards, touring the castles, and of course, shopping the trendy stores for sweaters, jeans, and jackets. However, beware of voyages that promise London, Paris, Rome, and Florence. You'll get there but only after a 1 ½-2 hour bus ride from the port. That not only adds transportation costs, but lots of opportunity for scowls, as few tweens and teens willingly get up early then sit quietly when stuck in traffic.

Alaska's best for nature loving kids age 10 plus who want to hike a glacier, dog sled, fly over an ice field, sea kayak through bays populated with seals, or take a float trip through a Bald Eagle preserve. Such active outings, on average, cost $100 or more per person, per port. Despite the expense, doing at least one of these gets you beyond the tacky port areas and into America's last, great wilderness.

Feeling tentative about cruising? Then, book a three-to-four day sail, a less costly option that enables you to sample ocean life and convince yourself that you really can stomach undulating waves. However, on a short voyage you might miss one of cruising's great lures: lazy sea days for lounging and admiring the limitless horizon.

Choose a children's program that fits your family's needs

Children's facilities and activities not only vary from line to line but also may differ among ships flying the same flag. Most programs operate at sea from 9am to 10 pm except for meal breaks. From 10 pm to about 1:00am most lines offer group babysitting for a fee. Before you book, be sure that the kids' program functions for your age child and for your sailing.

Pre-schoolers: With a non-potty-trained two-year-old, choose Carnival because their counselors change diapers. Norwegian Cruise Line's program accepts two-year-olds but counselors beep when it's time to redo the Pampers, a situation that may leave your tot wet and whining.

Disney's children's program divides into a group for ages 3-4 and another for ages 4-5, a system that works well for timid youngsters who may be unused to group play. On each ship, Flounder's Reef, one of the few nurseries at sea, tends to infants as young as twelve weeks for an hourly fee. The facility has limited capacity and hours.

For kids still young enough to believe in fairy dust, Disney offers dream encounters. On no other line can your kids take tea with Wendy, dance with Snow White, kiss Belle, or figure out how to help Peter Pan foil the dastardly Captain Hook.

Gradeschoolers: Kids ages 6 to 12, the easiest cruisers to please, like most any program as long as they meet a new buddy. Scavenger hunts, art and crafts, and big-screen computer games play well with this crowd.

Good options: Disney because of its innovative sessions in cartooning and science fun, and its sensitive grouping of ages 5-7, 8-9, and 10-12; RCI because of its caring and counselors and separate programs for six to eight year-olds and nine to eleven year-olds.

Avoid NCL with children ages 8 through 12, particularly if they've sailed before. These junior cruisers will rebel against NCL's policy of only allowing teens 13- and older to sign themselves into and out of the children's program. Most lines start this self-policing policy with eight-year-olds and junior cruisers relish their new-found freedom to roam in mini-bands from the pool deck to ping pong to the pizza parlor.

Unless large numbers of kids participate, both Holland America and Princess lump ages 3 to 7 together, a strategy that could make shy little ones feel overwhelmed and older kids selfconscious about being with "babies."

Teens: RCI offers the best program and facilities for teenagers, the hardest passengers to keep happy. First of all, RCI separates 12-14 and 15-17-year-olds, a philosophy that acknowledges a pre-teen's non-kid status without forcing a shy eighth-grader to keep up with a seen-it-all high school junior. Secondly, RCI gives teens ample territory to meet. They can gather at the Living Room, a hang-out, or dance at Fuel, the non-alcoholic disco. The Navigator, Mariner, Monarch and Sovereign of the Seas also add the Back Deck, a teen--only fun and sun spot.

Disney's also added more space for teens. Ages 13-17 years-old hang-out and dance in the Stack on the Magic, and, beginning Oct. 17, in a similar top deck club called Aloft on the Wonder.

Be savvy about pricing and extra costs

Brochure rates are deceptive. Often high-volume, cruise only agencies can get you the same cabin for less. Often, but not always, especially now that RCI and, starting January, Carnival, require travel agencies to offer only those rates approved by the line. "We're trying to level the playing field by offering the same rates to big agencies as well as to small agencies" says Carnival spokesperson Jennifer de la Cruz.

>For the lowest rates, book with a high-volume, cruise only travel agency, whether online or over the phone, and always shop around.

"We still get volume discounts from some lines," says Tara Rogers, World Wide Cruises, cruises.com. "On an NCL seven-day Caribbean cruise we can generally save a couple $250 on an inside cabin and more on a deluxe cabin. RCI still offers us discounted happy hour rates' on Tuesdays, when they try to unload inventory."

High volume agencies also can often get their clients upgraded on a space available basis. "We play by the rules," notes Mark Venezia, CruisesOnly, cruisesonly.com, "but by partnering with other companies we provide added value often in the form of upgrades or cash back or shipboard credit. For example, through the end of the year if you book an NCL cruise from a port near you, you get a free $100 gas card so you can drive to the dock. And with us, you always get someone on the line. We're here 24/7."

Extra Fees: It used to be that except for drinks, shore tours, gambling, spa treatments and the occasional specialty coffee, everything else onboard came with your cabin price. Not any longer. Although cruise lines haven't "unbundled" these items, charging for services and amenities once included for free, the ships now offer a range of new possibilities, each at a add-on.

To avoid busting your budget, simply say "No" or just be selective. A firm talk ahead of time and a family limit on such extras as Hagen Daz ice cream Sundaes, specialty dinners, wine tastings, computer workshops, and intensive Yoga may head off some on-board conflict.