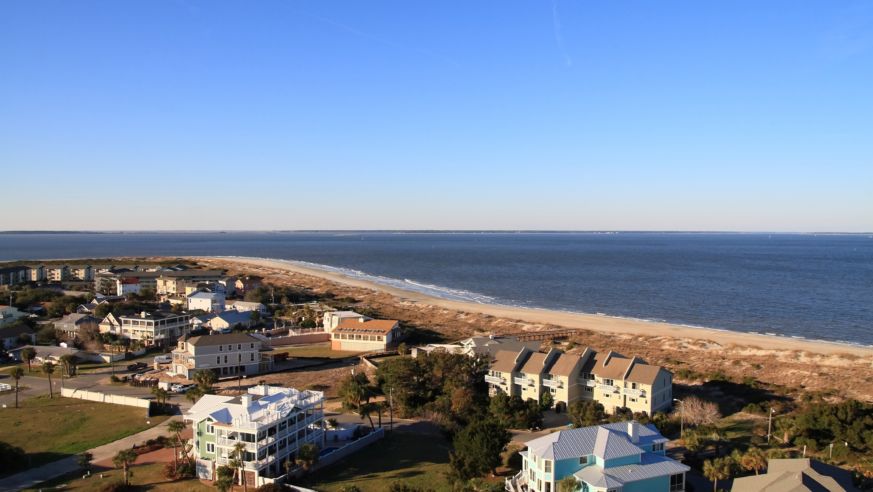 View of Tybee Island from top of light house

My husband, Michael, and I land in Savannah around lunchtime. Georgia's First City, as Savannah declares itself, is architecturally awesome--and maddening for drivers. Tour buses slowly crawl around historic squares. Tourists cluster in the middle of the street to peer at the impeccably restored 18th- and 19th-century houses. We have to go through town to get to our evening's destination, Tybee Island, so our plan is to park, fortify with some food, and get on our way.

Our first attempt at finding barbecue is unsuccessful. We make do with a black-eyed-pea sandwich at B. Matthews Bakery; it's a delicious approximation of a spicy falafel. I pocket a chocolate-chip cookie for the 18-mile drive to Tybee.

Georgia's most developed island feels kind of like Atlantic City meets Coney Island--a little shabby, but that shabbiness often translates to a retro charm. The Basta family runs the Georgianne Inn, three houses in from the beach, and the adult son Nick is our enthusiastic host. We borrow two cruiser bikes, and Nick gives us 10 minutes of pointers. Tybee's tides are remarkably low, so from mid-afternoon until sunset there's at least 50 feet of packed sand to play on. The southern side of the beach, beyond a long pier, has high winds, which attract kitesurfers, kiteboarders, and old-fashioned kite fliers.

For dinner, we head over to The Crab Shack, a Tybee institution whose motto is "Where the Elite Eat in Their Bare Feet"--but which we'll always remember as the kind of establishment where patrons bring their own beer cozies. Calling it a shack is either false humility or wishful nostalgia--it's more like a Crab Complex, with cutesy signs (DRINKING TO FORGET? PLEASE PAY IN ADVANCE), Jimmy Buffett on rotation, and a Gift Shack. We put our names on the waiting list and visit the man-made Gator Lagoon, where antsy kids are poking at baby alligators with sticks.

We order salty snow crab; a low-country boil of shrimp, potatoes, and sausage; and steamed oysters, which arrive unshucked. The food is good, but I'm otherwise engaged. There's a garbage can embedded in the center of each of the tables, and for some reason this excites me. No sooner has Michael shucked an oyster than I've tossed the shell into the pail. When our waitress comes to clear, I proudly declare that I've taken care of it for her.

By 8:30 a.m., there are 20 people waiting for a table at The Breakfast Club, a squat stucco house two blocks from the Georgianne. Joseph Sadowsky, an alum of the Culinary Institute of America, was recruited by John F. Kennedy Jr. and Carolyn Bessette to cater their wedding. He's pretty great on less fancy fare, too. I have a spicy homemade sausage patty with poached eggs and buttery grits. The low-ceilinged room, with sticky brown plastic tablecloths, isn't built for lingering--just as well, considering the line outside.

Highway 17, the main scenic road tracing the coast, doesn't offer much to look at until we put some distance between us and Savannah. But by the time we reach Riceboro, we're breezing under a canopy of live oaks. At South Newport, we pull off the two-lane highway to see what's billed as the smallest church in America, the Memory Park Christ Chapel. The 56-year-old nondenominational church--open 24/7 and rentable for weddings--is just 10 feet by 15 feet, with seating for only 12. A sign asks visitors to shut the door tight when leaving, which turns off the lights. I follow the instructions, perhaps too much so--the church is still rattling as we walk back to the car.

Most of the islands connect to the mainland by causeways. Getting to Sapelo Island, however, requires a 30-minute ferry from Meridian across the Intracoastal Waterway. It could just as well be a time machine. When the Civil War came, the heirs of a big plantation owner, Thomas Spalding, abandoned the island, their cotton and sugarcane plantations, and many slaves. The isolation allowed the former slaves, originally from West Africa, to sustain their own self-governing community and their own language, called Geechee. To this day, 57 descendants live on Hog Hammock, a 434-acre spread. Tobacco magnate R.J. Reynolds bought the island in 1934 but didn't mess around with Hog Hammock; he breathed new life into an existing mansion and established a wildlife area that's now run by the Georgia Department of Natural Resources. The island also has a marine institute operated by the University of Georgia.

To get access to Sapelo you have to have a reservation, either for a tour or at one of the island's two inns. (Before you board, you'll be asked who'll be greeting you on the other end; no name, no go.) I'd booked a tour with Yvonne Grovner, who runs trips five days a week for the Georgia D.N.R. Yvonne grew up on the mainland; she met her husband, a Geechee, in high school and moved to Hog Hammock once they got married. During a three-hour drive, Yvonne introduces us to other residents and points out the pastel, one-story shacks, most of which are abandoned. We see ruins of an old sugar mill, miles of deserted dunes on Nannygoat Beach, and the exquisitely faded Reynolds mansion. It looks like a double for the one in the 1998 movie of Great Expectations.

When Yvonne moved to Hog Hammock in 1980, there were more than 100 people; today, there are about half that. Fifteen school-age kids take the ferry each day to go to school; as they get older, there's not much to keep them on the island. One person she takes us to meet is Cornelia Bailey, who runs the bar (The Trough) and the gift shop (The Pig Pen), where she sells shells and Yvonne's handmade sweetgrass baskets. Michael asks Cornelia if she's always lived in Hog Hammock. "Is there anywhere else?" she says, with a wry smile.

The ferry ride back is lulling, the horizon interrupted only by green reeds and salt marshes. We drive south toward Brunswick, and then over a causeway. St. Simons Island is a world away from Sapelo. Kids in fluorescent flip-flops march giddily along the main drag, while dads golf and moms go shopping. We hunt down one of the island's five tree spirits--droopy, somewhat spooky faces that were carved into live oaks to commemorate sailors who died on boats made from St. Simons trees. (The easiest one to find is on Mallery Street, next to Murphy's Tavern.)

At Zuzu's, a '50s-style diner adjacent to the pier, we share a root beer float. It suitably ruins our appetites, so all we need for dinner is a bowl of thick Brunswick stew--shredded chicken, ground pork, corn, and okra--at the nautical-themed Blackwater Grill.

Rice was the most common--and notoriously brutal--crop in coastal Georgia: Slaves who worked the soggy paddies often caught malaria. Following the Civil War, not many rice plantations survived. On a tour of the Hofwyl-Broadfield Plantation in Brunswick, we learn it was one of the few that did, in part due to a pair of savvy sisters who turned it around by converting it into a dairy farm.

A terrific thunderstorm erupts right as we arrive on Jekyll Island. The Georgia coast has a subtropical climate; humid summer stretches well into October, and afternoon thunderstorms are common. We take shelter on the wide porch of the Jekyll Island Club Hotel, formerly the clubhouse commissioned by J.P. Morgan, William K. Vanderbilt, William Rockefeller, and Joseph Pulitzer, who were all part of the Jekyll Island Club, which owned the island in the late 1880s. Jekyll Island, including the hotel, was purchased by the state in 1947. I rock in a white wicker chair and admire the sailboats.

For all its former wealth, Jekyll is much more casual than St. Simons. Beyond the historic district, the interior is family-friendly and modest, with mostly small ranch houses. It would be sacrilegious not to play some kind of golf, so during a break in the storm, we squeeze in a round of miniature golf, then head back to Highway 17.

By the time we reach St. Marys, it's past 9 p.m. and the sleepy town is in full R.E.M. We check into the Spencer House Inn, a huge pink Victorian run by Mike and Mary Neff. Our huge top-floor room has a four-poster bed and a claw-foot tub. But the real draw is a DVD player; we borrow Friday Night Lights from Mike and Mary, who say it's one of the few DVDs in their collection that they were able to agree on, and settle in for the night.

St. Marys is where you board a ferry to Cumberland Island, which is run by the National Park Service. Thomas Carnegie owned the island in the late 19th century, and now wild horses and turkeys run free amid the ruins of his mansion. The sole lodging, the posh Greyfield Inn, is a mansion built by his widow; it was the site of the Kennedy-Bessette reception.

Only 300 people are allowed on Cumberland each day, and it's wise to reserve months ahead for the 45-minute ferry. Yesterday's rain messed up the ferry schedule, and there's no way to see the island and make our flight. So we look into renting a kayak from Up the Creek Xpeditions and walk around St. Marys. It's the prettiest town of our trip.

Causeways link most of the islands to the mainland, and in all but one case, they're free. The exception: There's a $3 daily car fee to visit state-owned Jekyll Island. The ferries to Cumberland and Sapelo islands depart only a couple of times a day, so plan your schedule in advance, and be sure to make the ferry back to the mainland. (There aren't any places to buy food on Cumberland, so bring your own lunch and water.) And when driving back up to Savannah, Highway 95 may seem like the speedy route, but it can take over three hours when the traffic is bad, which is often.