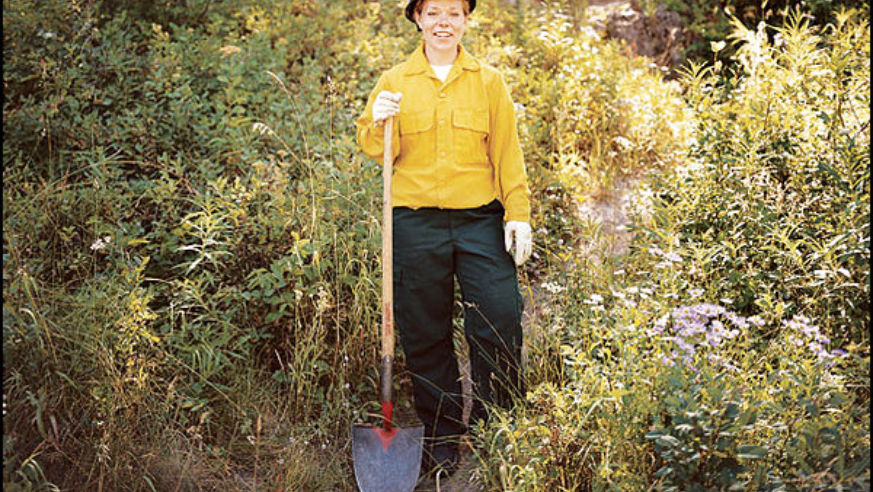 Angela Smith
Sara Murdock, near her home in Idaho. Her friend Beth Hicken didn't make the photo shoot because she was fighting a wildfire

Two friends fought forest fires in order to fund a month of backpacking around the U.K., Ireland, and possibly Italy

The two 24-year-olds, who live in a small town in Idaho that's actually called Small, planned on traveling in the fall. "My only experience out of the States was four hours in Niagara Falls," said Beth, "which I don't think really counts." Sara's lone venture overseas was a three-week trip last year to London and Paris. "I just want to go back," said Sara. "And I want Beth to go because it's so exciting and so different." They had their minds set on England, but hoped to see Scotland and Ireland, perhaps Italy. "We'll have to face the real world when we return," said Beth, who wants to be a social worker, while Sara plans on a career as a fire ecologist.

Money was their biggest concern. "The funds are looking slim," said Beth. They had a budget of $2,000 per person, not including airfare. "We'll stay in hostels and are willing to camp--anything to save a few bucks if that means we can travel more. We're trying to go for at least four weeks, but we're not coming back until the money runs out."

Beth and Sara are flying into London, and we recommended two hostels in the city: the HI City of London hostel, near St. Paul's Cathedral, and The Generator, an 800-bed independent hostel near the British Museum. Hostels aren't the only option, however. Bed-and-breakfasts are everywhere in Europe, including big cities such as London, where a double can cost as little as $50. Hundreds of B&Bs can be found on official tourism sites, such as visitbritain.com and ireland.ie, as well as independent sources such as bedbreak.com and (for Italy) bbitalia.it. Rooms in private flats or homes are sometimes even more affordable. (Local tourist offices usually keep lists.) Another possibility is couchsurfing.com, a network of travelers looking to crash for free on strangers' sofas. "I think we'd be willing to give that a try," said Beth.

"I'd love to see a play in London," said Beth. "How far ahead do you have to get the tickets?" Penny-pinchers buy seats at the very last minute, when they're discounted up to 50 percent at the TKTS booth in Leicester Square. There's no telling what'll be sold out, but on the day we checked, the hits A Few Good Men ($41), Twelfth Night ($27), and Phantom of the Opera ($70) were available.

London is perhaps the best city in the world for free museums and sights. A section of visitlondon.com lists all the spots offering free admission, including the British Museum and the National Gallery. Plenty of activities are free, too: attending sessions of Parliament in Westminster; hearing classical concerts at the church of St. Martin-in-the-Fields; hanging around Hyde Park's Speaker's Corner on a Sunday to listen to anyone with a gripe, anecdote, or political point harangue the crowds.

"I loved shopping in London," said Sara. "There's nothing like it--especially not in Idaho!" Beth and Sara will go on the hunt for souvenirs at the city's markets, including Petticoat Lane (daily except Saturday), and the half-dozen loosely connected flea markets known as Camden Markets (daily).

After London, Sara and Beth will use rail passes to explore England and Scotland (see Surprise! on p. 20). On long-haul journeys within Europe, flying is the least expensive option, thanks to no-frills airlines such as Ryanair and EasyJet. "I've heard that they say the fare is $40," said Beth, "but then charge $100 in taxes. Is that what it's really like?" Taxes and airport fees usually add on a reasonable $10 to $30 each way. None of the Ryanair flights we suggested will bust the girls' budgets: Edinburgh to Dublin for $28, Dublin to Rome for $48, and Pisa back to London for $28. The only complication is that low-cost carriers have strict baggage limits and charge steep rates for excess luggage, so we warned the women to read the fine print and pack light.

Using BritRail passes, Sara and Beth will head to Bath, where they can indulge in their shared obsession. "We're both big Jane Austen fans," admits Beth. "It's sappy, but true." Austen lived in Bath for several years, and on Saturdays and Sundays the Jane Austen Centre runs walking tours past the settings in Persuasion and Northanger Abbey.

Rather than focusing on the cities as on her last trip, Sara was intent on "getting out into the countryside to see what the locals are like, and see landscapes." Beth wholeheartedly agreed. "We're bringing our hiking boots," she said. We knew just where they should point those boots: the Lake District of northern England. It's one of Britain's premier walking destinations, mixing beautiful hills with the occasional ancient Celtic site or medieval castle. And the next country inn or village pub is never more than a couple of hours' hike away.

Continuing up into Scotland, Beth and Sara will poke around Edinburgh for a few days and then get back into the great outdoors. "You can only take so many castles, so many museums," said Beth. Inverness is a good home base for the Highlands, and walking.visitscotland.com gives the details on hundreds of treks. They might take an easy 7.5-mile walk through farm country to Dochgarroch, or tackle part of the 73-mile Great Glen Way, which skirts several lochs (including Loch Ness).

Next up is Ireland. "Bike rides would be wonderful," said Beth. "We always ride our bikes around town." The parkland called the Burren, in the west-coast county of Clare, is a fine place to ride. The Burren Way, a 26-mile trail through sheep-dotted fields, winds south from the town of Ballyvaughan, where bikes rent for $17 a day. They could pedal all the way to Doolin, a crossroads hamlet with wonderful pubs and some of the best traditional music in Ireland.

Beth and Sara wanted to see the big sights in Florence and Rome, but what really got them excited was when we mentioned the Cinque Terre. The five fishing villages north of Pisa are connected by narrow trails and draw thousands of casual hikers in the summer months, but autumn should be quieter, not to mention cooler. The smartest approach is to take an early train to the northernmost village, Monterosso al Mare, and hike through vineyards and olive groves. If they time it right, by sunset they'll be strolling into the southernmost town, Riomaggiore, home to cheap rooms and a pebbly beach.

During our first conversation with Beth, it was obvious she was worried about how much she didn't know. "I just haven't researched as much as I should," she said. There was no need to stress. Backpackers who seem to know everything and plot out every move tend to have a lot less fun than the folks who are clueless but up for spontaneous adventure. The most memorable parts of a trip are often the things not planned--stumbling onto a village festival, dancing all night at a club thanks to a tip from another traveler, hopping on a boat at sunset with new friends. There's always another hostel or rental room just down the road, and things will fall into place.

The last time we talked, Beth mentioned a friend just south of London, in Sussex. "Hopefully," she said, "he'll let us stay, maybe for a couple of days." A free room and the chance to get off the tourist path and hang with some locals? Sounds like Beth and Sara are learning to backpack like seasoned vets.

BritRail was kind enough to set up Beth and Sara with free Flexipasses, good for eight days of first-class travel within a two-month period in England, Scotland, and Wales, valued at $435 each for travelers under age 26 (britrail.com). What more appropriate gift for two friends who want to explore as much as they possibly can?