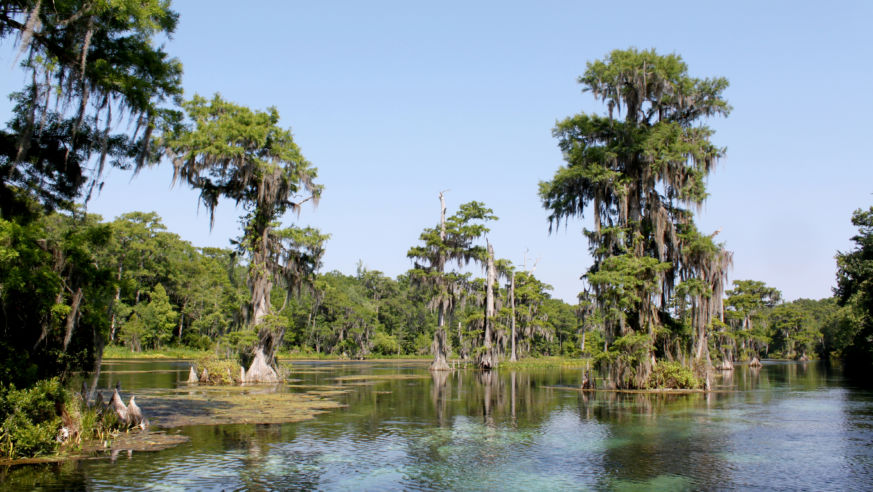 Cypress trees grow in the river in the natural setting at Wakulla Springs in Florida, USA.

The northwestern coast of Florida sprawls out in one sandy strip. There's plenty of room for everyone—spring breakers and gators included.

Minutes after leaving the Tallahassee airport, my boyfriend, Ted, and I realize we're about to experience a side of Florida quite different from hard-partying Miami and built-up Orlando. This is the South: The airport abuts the Apalachicola National Forest, and the road out is lined by thick pines. The forests are so dense, in fact, that Ted makes uncomfortable jokes about expecting to hear "Dueling Banjos."

Wakulla Springs State Park, 15 miles from the airport, has a freshwater spring that's 70 degrees year-round. Over the years, divers have explored the depths--at 185 feet, it's one of the world's deepest--and come back up with, among other things, the skeleton of a mastodon, a prehistoric elephant-like animal, which was found in the 1930s. Meanwhile, fishermen found Old Joe, a 650-pound alligator (shot between the eyes in 1966 and now in a vitrine in the lobby of the Wakulla Springs Lodge).

We arrive at 10:30 a.m., just in time for a 40-minute boat tour on the Wakulla River, which runs through the park. Our guide is J.J., a young, handsome guy who loses points when he instructs us to call him Captain Crash. "Don't touch the alligators, because they'll touch back," warns the Captain. Beady eyes blink at us from the water, and touching what's attached to them couldn't be less appealing. On the shore, an anhinga, a black-and-white-feathered waterbird, is standing still, its large wings spread out to dry. Somehow it seems foreboding; the fact that the 1954 horror flick Creature From the Black Lagoon was filmed at Wakulla Springs comes as no surprise.

Back onshore, I see a sign reading alligators--swim with caution. A more appropriate sign would say swim elsewhere. We move on to meet some friendlier animals at the St. Marks National Wildlife Refuge. The 68,000-acre refuge is a protected winter stopover for migratory birds. We pick up a driving guide to the seven-mile Lighthouse Road, and dutifully veer off at each of the seven pullouts to admire marshes and man-made freshwater pools. From start to finish, ours is the only car on the narrow road; the action is confined to cabbage palms swaying on the shoulder. Signs along the road and walking trails list bird species to look out for, as well as relevant historical facts. Among other interesting tidbits, we learn that Native Americans and colonists used the bark of prickly ash trees to soothe tooth-aches, and made tea from wax myrtle as a stomachache remedy.

Spring Creek is a small fishing community 13 miles south of Wakulla Springs. Spring Creek Restaurant, owned by the Lovel family, has an attached gallery that displays drawings of flounder and other fish by the son, Clay Lovel. The fried oyster sandwich is plump and delicious, and while eating, Ted and I flip through Spring Creek Chronicles, a two-volume paperback collection of short stories by the father, Leo, describing his "mullet catching, turkey shooting, offshore fishing, and law evading" activities. We're suitably intrigued and ask Leo, who's behind the counter, to elaborate. He tells us it was nothing serious: "Just fishin' with an outlawed net, but I'm still in court for it." The exchange somehow raises more questions than it answers.

We join Old Joe, the monstrous gator, at Wakulla Springs Lodge, built in 1937. A family is playing checkers at one of the marble-topped tables in the lobby, which has hand-painted beams on the ceiling. Our room, which faces the springs, is furnished with a comfortable chaise and a four-poster bed. Ted falls asleep within seconds. Not me. I'm haunted by thoughts of what might be lurking outside. Alligators? Creatures from the Black Lagoon? Leo Lovel with an outlawed net?

From Wakulla, we head over a five-mile causeway to St. George Island. At first, I'm disappointed--the Panhandle is famous for its 220 miles of sugar-white beaches, but all I see are masses of vacation homes on stilts. On the less-developed east end, there's more of what I'm looking for. The white sand at St. George Island State Park is dazzling, marked only with the tracks of blue herons. A nature trail winds through a pine forest to the bay side of the island.

We're spending the night six miles farther west on the mainland in Apalachicola, which has a long history as a hub for the oyster, sponge, cotton, and lumber industries. Today, the warehouses and offices are mostly gone, replaced by restaurants, boutiques, and tourist shops. Despite all that, it feels more like a lovely, slow-paced village than a buzzing town. (Apalachicola got its first stoplight only weeks before we arrived.) A guy standing in front of the chamber of commerce says that if we want a lunch place with character we should head to Indian Pass Raw Bar, 18 miles west in the town of Indian Pass. From outside, the ramshackle, paint-chipped building looks abandoned. Inside, it seems like the whole town has showed up for lunch. There's hardly room at one of the long tables, which are covered with plastic checkered tablecloths. Each table has a roll of paper towels and a box of Saltines; both come in handy when sopping up the spicy seafood gumbo. It's a small bowl, but it's mighty filling.

Returning to Apalachicola, we check in at the Gibson Inn. The grand Victorian was built as a hotel in 1907, and our room has an antique four-poster bed and wicker chairs. I'm glad we're not in room 309, where the ghost of a ship's captain is rumored to appear occasionally. We walk around town, looking at all the beautiful Greek Revival and Victorian buildings dating back to the 1830s. The men who made their money in the town's industries built stately homes, some of which have been turned into inns.

We're happy to discover Tamara's Café Floridita. The original owner, Tamara Suarez, moved to Apalachicola in 1996 after 10 years as a TV producer in Venezuela. On a vacation, she fell in love with the town's quaintness, and thought--rightly so--that the locals could use a restaurant that served something other than fried fish. She recently sold the restaurant to her daughter and son-in-law, but the menu remains Latin fusion. Ted and I split four tapas (shrimp with garlic, mussels in wine sauce, crab cakes, and prosciutto with fruit). The crab cakes have a real kick, and we use bread to polish off the wine sauce loaded with capers, red peppers, and shallots. We're in heaven, and somehow we still find room for the perfectly tart key lime pie. Back at the Gibson Inn, we have a nightcap of mint juleps while sitting in rocking chairs on the wraparound porch.

Route 98 is the main road tracing the coast, and for 60 miles to the west, there isn't a whole lot to see other than stores selling spring-break souvenirs. We speed past Panama City, with its go-kart joints, video arcades, and body-piercing salons. In Seagrove Beach, we stop at Cocoon's, a deli and take-out market, to pick up tuna sandwiches and marinated artichoke salad.

Then it's on to Eden Gardens State Park. Lois Maxon, a wealthy New York publisher, bought the former lumber baron's estate in the early 1960s and spent most of the decade renovating it and planting 11 acres of gardens. The Choctawhatchee River used to be the main artery for lumber barges, and we make a picnic in the park at a table beside the Tucker Bayou, an inlet of Choctawhatchee Bay, where the lumber was loaded and carted by barge up to Alabama and beyond. On a 45-minute house tour, the guide gives us the lowdown on Maxon's impressive antiques, which include the country's second-largest collection of Louis XVI furniture.

The Panhandle of Florida is one of the only places in the country with coastal dune lakes. Because the lakes are filled with freshwater in addition to small amounts of salt water, migratory birds depend on them as a water source, as did Native Americans some 10,000 years ago. It begins drizzling just as we start walking down the two-and-a-half-mile Morris Lake nature trail toward one of the lakes at Topsail Hill Preserve State Park. Still, we continue on through the wet sand, and the sound of the ocean gets louder. A shimmering lake appears between the dunes; lily pads are floating on the surface, mist is rising from the water, bass are jumping and flopping. A quick look is all we can manage before we race back to the car, drenched. Later, someone tells us that alligators live there, too, but luckily we didn't cross their path.

The rain has finally stopped by the time we wake up, but it's still a cold 50 degrees, which is fairly normal for winter. Clearly, indoor activities are in order. Every region in the country seems to be gunning for the title of the Next Napa these days, and this part of Florida is no different; in fact, there are five wineries on the Panhandle. At Chautauqua Winery in De Funiak Springs, a short video presentation gives the long view on local winemaking, pointing out that the first wines in the New World were made in Florida in 1662. To our delight, the tasting is free, and the Chautauqua goes all out, serving a total of 17 varietals--in small amounts--including chardonnay, merlot, and zinfandel. My favorite happens to be one of the specialties, the wildflower honey muscadine, a dessert wine made from local muscadine grapes. Because it's a chilly day, the tasting ends with a small glass of hot mulled wine with cinnamon and cloves.

With a late flight out of Tallahassee, we've got just enough time to visit Florida Caverns State Park in Marianna, about an hour from the airport. I tend to experience claustrophobia, but ranger Frank Strickland assures me there are no tight squeezes. On the 45-minute tour, Strickland explains how water dripping through the limestone ceiling eventually dissolved the calcium and produced stalactites, stalagmites, and flowstone, a cave formation that resembles a frozen waterfall coating the cavern walls. Some of the especially unusual rock formations we see include a column in the form of a wedding cake and a large blob of flowstone that looks strangely like a pipe organ. It did to me, anyway. Then again, maybe I had a bit too much of that muscadine.

Pensacola, on the Panhandle's western edge (and served by AirTran), can also work as a starting point for this trip. Note: Hurricane Dennis did some damage to Indian Pass Raw Bar as well as St. George Island State Park. The restaurant will be fixed up by early 2006. However, it's wise to call ahead for updates before visiting the area. A couple of navigational pointers: To drive closest to the beach, take 30A, which veers off Route 98 after Sunnyside; the Chautauqua Winery is at the intersection of exit 85 on I-10 and Route 331, off Business Park Road (it can be tricky to find).