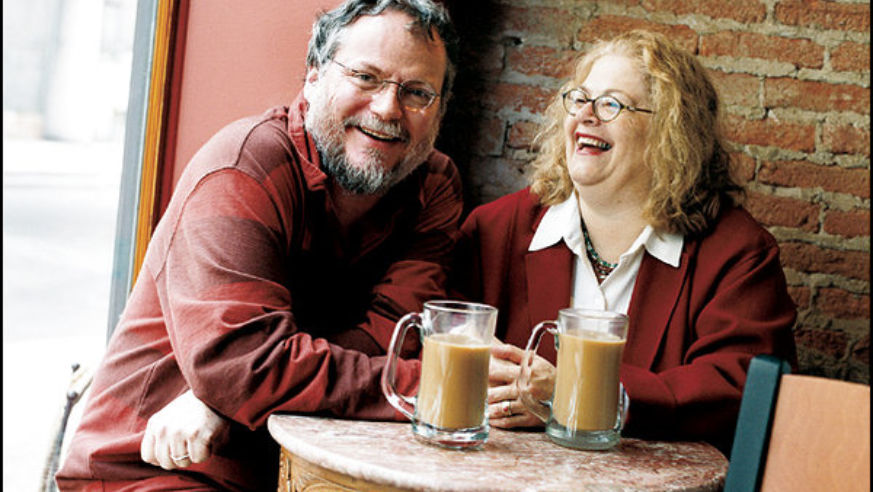 Spurred on by a generous gift, a couple is heading on a delayed honeymoon

When Sally Leiderman and Bob Woodcock got married in September, they weren't compelled to rush off on a honeymoon. For one thing, this is a second marriage for the 50-somethings from the Philadelphia suburb of Conshohocken. For another, Bob's a nurse-anesthetist and finds it hard to take time off from work.

"My sister and her husband gave us a fabulous wedding present," says Sally. "A gift certificate for one week at a time-share anywhere in the world." Sally and Bob are dedicating two weeks in February to their trip. They're interested in "history, politics, music, architecture, and the everyday life of people," Sally tells us, and both have a passion for food. They decided on Spain because Bob speaks Spanish and Sally fell in love with the country a few years ago while visiting her daughter, who was studying in Salamanca. Bob is especially excited because they are tacking on a visit to the Azores islands, the Portuguese territory where his grandmother was born and raised.

"I'm pretty good at travel planning, but I got frustrated," says Sally. "There was little information on the Azores, and we couldn't figure out where to choose a time-share in Spain." We advise the couple that Catalonia, the northeastern part of Spain centered on Barcelona, seems like a perfect location for them. They're traveling first to Barcelona using frequent-flier miles; for most other connections we're steering them to Azores Express, a U.S.-based tour operator that sells flights on SATA, the island chain's major carrier.

After struggling to find anything available near Barcelona through the time-share company RCI, Sally and Bob have decided to stay at a two-bedroom ocean-view condo about an hour's drive from the city. The resort, just outside Tarragona, a working port known for its well-preserved Roman ruins, is in a tourist development called Estival Park, which has a big theme park nearby. That kind of amusement doesn't appeal to Sally and Bob, but the locale, within easy reach of Barcelona and plenty of towns worth checking out, works nicely. Driving and parking in Barcelona is difficult, so Sally and Bob can use Plaça de les Glòries MetroPark, a park-and-ride, and then take public transportation into the city (onaparcar.bcn.es, $6).

"I remember everything in my life with regard to food," says Bob. He's certain to love Barcelona. The hottest neighborhood, El Born, is full of innovative restaurants, along with a few traditional spots to eat. At Cal Pep, a hidden Catalan tapas bar, locals fight for seats at the counter to watch chefs frying artichokes, steaming clams, and flipping tortillas (potato omelets). The snacks and drinks at Dulcinea, a 1940s granja (chocolate shop) on a pedestrian-only street in the nearby Gothic Quarter, warm up patrons on chilly winter afternoons. The thick hot chocolate is best enjoyed with a dollop of nata (whipped cream) and melindros, the Spanish version of the madeleine.

Sally asks us about any Jewish historical sites worth visiting. An hour northeast of Barcelona is Girona, noted for having one of the best-preserved Jewish quarters in Europe. Amid the medieval walls and narrow streets dotted with restaurants, bookstores, and galleries is a former synagogue that serves as the Museum of Jewish History. There's a collection of Hebrew headstones that date from the 12th century, along with medieval jewelry and a commemorative stone from Girona's 14th-century temple.

"When I travel, I'm a participator," says Bob, an amateur chef who plans to do a fair amount of cooking in their condo. "I like to see the goings-on in a community, the way people interact over food, like at farmers' markets." About 45 minutes from Tarragona is Vilafranca, a market town and the capital of the Penedès wine country, which is famous for producing the sparkling wine known as cava. The Saturday-morning market is the region's best, and other markets are held throughout the week (there's a schedule at ajvilafranca.es). In addition, the Museu del Vi displays old wine bottles and other winemaking equipment in a 12th-century palace. "That's definitely Bob's kind of thing," says Sally.

Just outside Vilafranca, Sally and Bob can tour the vineyards and cava cellar and sample wines at Parés Baltà, family-owned since 1790. Unusually, two women--the owners' wives--are the winemakers. Another option is driving to Valls, a town known for its char-grilled calçots, leek-like onions. They'll just miss the Calçotada festival in late January, but there are many fine places in town, including gourmet restaurant Masia Bou, to enjoy the calçots, usually served as a messy first course. Patrons dip them into a giant bowl of romesco sauce--garlic, hazelnuts, almonds, and piquillo peppers.

The couple wants to visit San Sebastian, the Basque Country's culinary center, but since the drive is at least five hours, we suggest staying a night in the city at the Pension Itxasoa. "If it's clean and safe with a good bed, it'll be fine," says Sally. The Itxasoa is that and more, with ocean views and an old-quarter location. Nearby, there are plenty of bars--on Calle 31 de Agosto, in particular--with great pintxos, the Basque equivalent of tapas; the bite-size treats at Bar Bergara, a 20-minute walk from the old quarter, are so elaborate they resemble mini Christmas gifts.

The easiest way for Sally and Bob to get to the Azores is via Lisbon, so they're flying there from Barcelona (on Spanair, for only $62) to spend a couple of nights at another nice pension, Residencial Geres, before heading on to the islands. Bob plays traditional mountain music on banjo, guitar, and mandolin, and wants to hear fado songs, which are said to reflect Portugal's soul. The touristy fado clubs in Lisbon are easy to find, but for something more special, A Tasca do Chico is a great hole-in-the-wall bar where singers might include taxi drivers and waiters. "We also like quirky museums," says Sally, which prompts us to mention the Marionette Museum, with more than 800 puppets. As it turns out, Sally used to put on marionette shows.

First up in the Azores is the main hub, São Miguel. The island's Furnas Lake, in a forest of bamboo and Japanese red cedar, is perfect for a romantic walk, even if the smell of sulfur permeates the air (it's within a volcanic crater). At 12:30 p.m., locals remove pots of cozido, a meat-and-vegetable stew cooked in the steaming earth. "It sounds like something my grandmother would make," says Bob. Their lodging is the Terra Nostra Garden Hotel, which has a fantastic restaurant.

"I like seeing how things are made," says Bob. "As a kid, I always loved field trips to factories." He's likely to enjoy the Fábrica de Chá Gorreana, the island's oldest tea factory, in business since the late 1800s.

Bob's grandmother changed her name before emigrating to the U.S., and no one in the family knows her original surname, so he doesn't expect to find where she lived on their final stop, Flores. "We'd still like to learn about her roots," says Bob. "The food, festivals, traditions, and culture on the island." They have a few days to do just that, after checking into Aldeia da Cuada, a 19th-century village with cobblestone paths and ocean views that's been transformed into 13 black-basalt guest cottages. Each unit has a kitchen, so perhaps Bob can whip up one of his grandmother's favorite dishes.

"I'd love to surprise Bob with a culinary class," says Sally. And thanks to Barcelona's Cook & Taste, the newlyweds will get just that: a half-day, hands-on workshop focused on regional cooking, free of charge.

"We had a wonderful honeymoon in Turkey," says Kristi Barnes, with husband Dave, who we coached on a trip back in September. "Cappadocia was unusual and breathtaking. The 'fairy chimney' formations are truly spectacular."