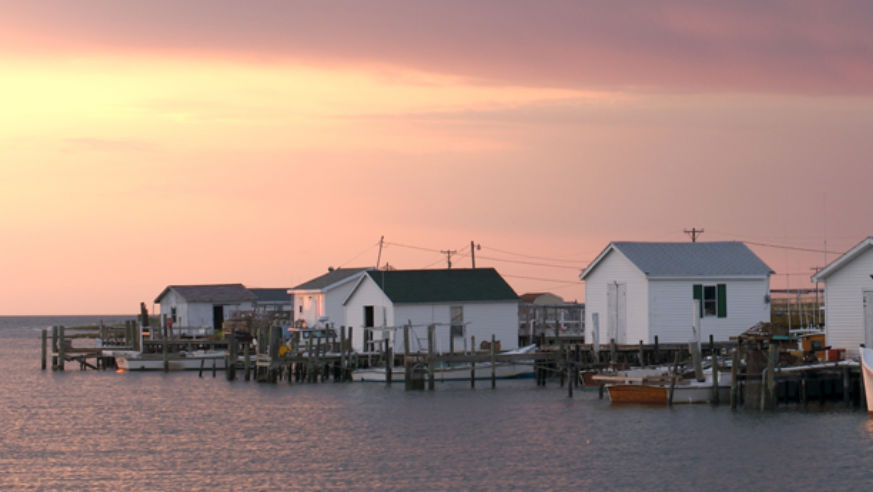 This quiet Virginia peninsula is the Chesapeake that you fantasize about—friendly towns, crab aplenty, and history at every third mile marker.

My friend Sam and I land in Richmond just after noon and head northeast. The Northern Neck was named after its shape: It's a long, narrow peninsula that looks somewhat like a chicken's wobbly throat. Bordered by the Potomac River to the north, the Rappahannock River to the south, and Chesapeake Bay to the east, the Northern Neck has been well preserved, thanks to dedicated conservation. We cross over the Rappahannock on a simple two-lane bridge, leaving behind strip malls and tract houses for wide expanses of farmland. It feels as though we've traveled much farther than 50 miles from Richmond.

Virginia is proud of its history, and vocal about it, too. Markers along the side of Route 3 declare it historyland highway. The Historic Christ Church, a 1735 Georgian church outside of Irvington, has a particularly interesting story. The man responsible for building it, Robert "King" Carter, was a busy guy, as we learn in a museum next door. Carter was a member of the House of Burgesses (Virginia's colonial assembly); acting Governor of Virginia; and ancestor of "three signers of the Declaration of Independence, two presidents, eight Virginia governors, a Supreme Court chief justice, and Robert E. Lee." The list grows every day; in fact, a guestbook asks if visitors are Carter descendants.

An increasing number of people from Richmond and D.C. are buying second homes in the Northern Neck. To furnish them, they go to the antiques stores in the town of Kilmarnock. We arrive just before 5 p.m. and race to the Kilmarnock Antique Gallery before it shuts for the day. Gallery is an understatement. The large warehouse has dozens of stalls selling everything from costume jewelry to antique oyster plates. I pick up a set of 1950s anodized aluminum ice-cream cups for my mom.

GrandView, our B&B for the night, is about 20 miles up the road. The large house sits on the Great Wicomico River, and water laps against sand in the backyard. Inside, an earnest but precariously cute aesthetic prevails. My bedside lamp is in the shape of a lighthouse, and a plaque on the wall reads a boat is a wood-lined hole in the water in which you pour money. The owners, Chris and Sandye Mills, bought the property in 1984 and spent weekends sleeping in an old Richmond city bus that came with the land. "Eventually we decided it was too cold in the winters and too hot in the summers," says Chris. So they ditched the bus and built a B&B in its place. After checking in, Sam and I play fetch on the beach with the Mills's enthusiastic mutt, Survivor.

We go to dinner in Reedville. The town was founded in 1874, and it did well for itself thanks to a small, oily, bony fish called menhaden. (It's used in the manufacturing of everything from animal feed to lipstick to bread.) The catch made sea captains so wealthy that they built Edwardian-style mansions, many of which still line Main Street. At the Crazy Crab on Reedville's marina, I introduce Sam, a Connecticut Yankee, to the Southern goodness of hush puppies (deep-fried balls of seasoned cornmeal) while we sit on the deck and watch the sun set over the water. Our night ends at another marina, Great Wicomico, where we toast locals with $2 Buds at the Boathouse Lounge.

After the B&B's breakfast of homemade coffee cake and scrambled eggs, we drive back into town to go to the Fishermen's Museum. Before this trip I'd never heard of the menhaden, and now I can't stop hearing about the bony little fish. We learn that they're still very much alive and swimming. "This is a success story!" crows the narrator of a video presentation about the menhaden fishing industry. A house at the museum was restored to reflect the daily life of an average 1900s local fisherman. Our docent, Bob Matthews, says he and his wife, Natalie, are originally from the Boston area. "We're come-heres," he says. It's clear from the looks on our faces that Sam and I don't understand, so Bob explains. "There are born-heres, come-heres, brought-heres (such as kids or spouses), and come-back-heres. Reedville, itself, is named after a come-here, Elijah Reed, a sea captain from Maine." After the tour, we don't have much time to linger--we've got a ferry to Tangier Island to catch.

Two things make Tangier Island tick: soft-shell crabs and tourists. Three ferry services bring about 20,000 visitors each year to the self-proclaimed soft-shell capital of the world (quite a title for what's all of three square miles). A display between souvenir shops shows live crabs in tubs with placards explaining the industry. Fishermen set traps, keep an eye out for crabs about to molt--the edges of the paddle fins turn dark red--and place them in holding pens until they shed their shells. Once they're soft-shell crabs, they have to be removed immediately or their hard-shelled neighbors will eat them right up.

The island has a days-gone-by charm: Clapboard houses with white-picket-fenced yards line the shore. Golf carts are the main vehicles used to get around, though locals drive them like they're sports cars. We hop on a cart waiting by the dock for a tour by Tangier Island native Sylvia Parks of Parks Tours, a guide for 31 years. "There aren't many secrets here," Sylvia says, lead-footing it around the narrow dirt roads. "Everyone knows everyone and everything." Locals don't even pretend they're not watching your every move. Later, as Sam pets a dog, two men on a golf cart pass by and, without stopping, shout, "The dog's name is Milli--as in Milli Vanilli."

We have lunch at the Fisherman's Corner restaurant, run by three fishermen's wives. "They can be sure their catch is fresh," says the hostess. "It comes directly from their husbands, after all." I have my first-ever soft-shell crab sandwich. The two deep-fried crabs, wedged between slices of Wonder bread, look and taste as though they crawled straight from the bay into the fryer.

Sam and I walk past crab traps on the piers and stop at a bulletin board. A handwritten sign reads $1 for 10 tangier island recipes, and there's a bucket for money tacked to the frame. (Aunt Nellie's Crabmeat Casserole and Mom's Coleslaw both require generous amounts of mayo.) The Reedville ferry, which usually makes only one trip a day to Tangier, departs soon. It's a 90-minute ride to the mainland, and we get back around 7 p.m. Since things close early on the Neck, we have to make good time to get to Kinsale, 45 minutes away, in time for dinner.

Sam and I have signed up in advance for the 10 a.m. departure of a kayaking tour on the Potomac, at Westmoreland State Park. Our destination is Horsehead Cliffs, a section of the coast that used to be under a prehistoric sea. The area was popular with sharks, and the predators' fossilized teeth can be found in the sand. When we arrive at Fossil Beach, visitors are sifting the sand through screens and pocketing their discoveries. Park policy, surprisingly, is that you can keep whatever teeth you find--which would've been cool, if we'd found anything.

Westmoreland Berry Farm, about 15 minutes away, has a similar keep-what-you-find policy. In addition to u-pick strawberry and blueberry patches, there's a petting zoo and barn with fruit preserves and berries for sale. Instead of picking, Sam and I opt for a tour around the property on the kiddie train, which is pulled by a tractor. Sam tries to bail mid-route, claiming his spine is going to snap from all the bumps, but by the time he's about to jump off the train, the eight-minute ride is already over. A slice of fresh-baked berry pie à la mode helps speed his recovery.

On the other side of Westmoreland Park, Stratford Hall Plantation was home to several generations of Lees, the most famous being Robert E. At the visitors center, photographs and excerpts of the family's personal correspondence highlight the accomplishments of a litany of Lees, but the plantation history itself also grabs me. Stratford Hall was built after another house burned down, killing a servant. (The fire is believed to have been set by indentured servants.) We're staying the night on the property: Our simple guesthouse has Northern Neck ginger ale in the vending machine and a back patio overlooking the woods.

Before the trip, I'd heard good things about the Driftwood, a restaurant in Coles Point, 25 miles away. I order the fried oysters and a chardonnay from a local vineyard, Ingleside. I'm rewarded on both counts. The wine is sharp and satisfying, and the lightly breaded oysters from the Chesapeake are salty and slick. After coffee, Sam and I retire to the back patio of the Stratford Hall guesthouse to stargaze.

Good Eats Café is a gourmet restaurant in a former gas station outside Kinsale, and it's more great than good. Star lanterns hang in the windows, and bright ceramic suns are mounted on the yellow walls. Most of the decorations are souvenirs from regulars' travels. I understand why the place inspires such affection when I taste my dinner: pan-seared scallops and potatoes baked with rosemary and Parmesan. Sam has pork loin in Thai basil sauce with broccoli, pecans, and cranberries. We're so full that dessert is doomed.

We're the only ones at breakfast in the plantation's dining hall. It looks like a mess hall from summer camp, but the buttery biscuits, moist corn bread, and strawberry preserves, all made on the premises, are anything but camp quality.

Maybe 11 a.m. is a little early for a wine tasting, but when we pass a turnoff for Ingleside Vineyards, in Oak Grove, I remember last night's chardonnay and decide to go for it. During a tasting of eight varietals, our guide explains that Virginia's conditions are ideal for grape cultivation. The Petit Verdot grapes thrive more on the Northern Neck than in either California or France.

Even the vineyards in Virginia can claim historical significance. During the Civil War, Union soldiers used Ingleside's property as a fort. At the winery museum, displays show how the local roadways follow routes of old Native American trails. My wine buzz wears off around the same time I read about how Pocahontas was supposedly kidnapped from this very area.

On our way to Richmond, we stop at Goolrick's Pharmacy in Fredericksburg. The decor hasn't changed much since the '40s.

Aluminum stools are lined up along a Formica counter, and vintage Coca-Cola signs hang on the walls. The menu hasn't changed either: The soda fountain has always served rich milk shakes in only one size (large). Sam orders a large coffee shake. I ask for a small nonfat vanilla. Sam sighs, and the waitress looks at me blankly.

I quickly amend my order to a large chocolate. In these parts, tradition is to be respected.

The Northern Neck is a seasonal destination: Many restaurants and services have reduced hours or close completely October through April, so call ahead before visiting. The ferry from Reedville to Tangier Island begins its summer service May 15. As for the driving, the main roads around the Northern Neck are Routes 3, 200, and 360. The best scenery, however, is on the side roads, such as Routes 649, 644, and 657--all in the tip of the Neck around Reedville. You can pick up free detailed maps of the area at the Crazy Crab in Reedville and many other local businesses.