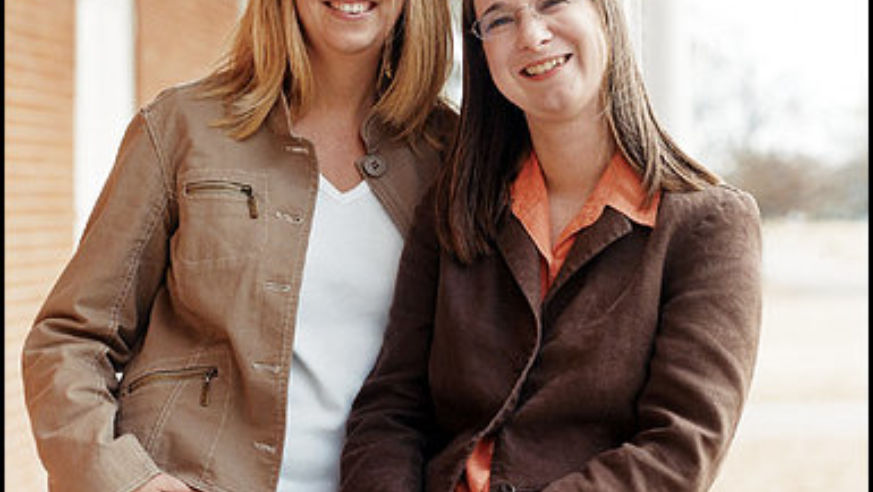 Jenny Meader (left) and Heather McKinney, near campus at the University of Arkansas in Little Rock

Two frazzled law school grads want to relax and enjoy the outdoors in the tropics. Which island suits them best?

After three years of law school and several grueling weeks preparing for the bar exam, Jenny Meader and Heather McKinney, of Little Rock, Ark., are ready for some R&R. Both are in their early thirties, having worked for several years before heading back to school, and are looking to steer clear of a spring break bacchanal. "We're planning a Caribbean vacation before we become responsible adults again," Jenny wrote to us. "No more briefing, no more blue books, no more teacher's dirty looks."

Heather and Jenny have hefty loans to pay off and hope to keep expenses to a minimum, with a budget of $2,500 each for about five nights. "We'd like to leave sometime around April 7, when the bar exam results come out," says Jenny. "The trip will either be a celebratory one, because we passed, or one where we find a new career selling seashells by the seashore."

Picking the right island is the first task. We start by asking what they see when they imagine their ideal locale. "Sandy beaches," Jenny responds, "with clean, clear water, friendly locals, and good food." Heather adds that they'd also like to do some hiking. "Being near the beach and the rain forest would be amazing," she says. "We intend to go hiking and snorkeling." The island also has to be a safe, stress-free place for single women. And finally, they're looking for a stylish, welcoming place to stay with air-conditioning and, ideally, a kitchenette.

It's a tall order, especially considering their money constraints and the fact that they're traveling at the tail end of high season. We first suggest St. John, one of the U.S. Virgin Islands. Not only is the island mostly undeveloped, two-thirds of it is a national park, with fantastic beaches and easy day hikes. But there are a few drawbacks. St. John is popular for cruise ship excursions, and well-known beaches such as Trunk Bay can get crowded. More cons: St. John doesn't have a true, classic rain forest with towering old trees; and, perhaps most critically, inexpensive rooms with A/C are scarce.

Jenny is intrigued with what she's heard about the "Nature Island" of Dominica. It certainly has a legitimate rain forest, along with challenging hikes at altitudes high enough to keep mosquitoes at bay. There aren't a lot of tourists, which sounds good, but they stay away largely for the same reasons Heather and Jenny might--the beaches are either rocky or too far from the hotels they'd find most comfortable. And the main town, Roseau, is full of old, worn-looking buildings and might be a turnoff.

While discussing the options, Jenny and Heather discover their priorities don't entirely match. "I'm sold on Dominica," says Jenny, "but Heather doesn't want to give up the beaches. Is there someplace that's a cross between Dominica and the Virgin Islands?"

The solution is St. Lucia, famous for the two giant oceanside peaks known as the Pitons, with wonderful white-sand beaches and a variety of accommodations. We recommend staying in the shadow of Petit Piton, at the southern end of the island, near the fishing village of Soufrière. There are plenty of beaches and hiking opportunities, and it's away from the traffic and large hotels of capital city Castries. Before they settle on the Soufrière area, we offer up another choice on St. Lucia's east side, the Fox Grove Inn, which rents hotel rooms and apartments, only some of which have air-conditioning. And considering the location, they'd definitely need to rent a car, something they'd rather not do, at least not for the entire vacation.

Upscale Soufrière resorts such as Anse Chastanet and Ladera are out of Jenny and Heather's price range, but might be worth visiting for a meal or a swim. At our suggestion, they consider two retreats in the mountains outside town, Crystals Guest Cottages and Stonefield Estate Villa Resort. Jenny and Heather are instantly infatuated with the latter's 19 villas--with kitchens--spread over 26 acres; paths trace lines among the mango trees and other greenery. "It seems to be exactly what we want," says Heather. "It's away from the bustle, and how could we not be excited about the amazing views?" They especially like that airport pickup is included in their package, and that all guests can ride a daily shuttle into Soufrière and to the beach at the Jalousie Plantation resort, each about ten minutes away. They decide to delay their trip until after April 15, when the resort's rates drop. And then they splurge, going for a package that includes massages and a larger, ocean-view villa. "The regular deluxe suite was sold out for our dates, so we upgraded to the luxury suite," says Jenny. "We get our own private swimming pool!"

Finding reasonable airfare winds up being fairly easy, in part because Jenny and Heather shifted their dates to after spring break. A few Internet searches make it apparent that U.S. Airways has the best fares out of Little Rock: $630 round trip, with stops in Charlotte and Barbados, about $100 less than other carriers for the same dates. Satisfied with that rate, they decide against trying to save some cash by flying out of a bigger hub such as Memphis or Dallas; it isn't worth the trouble.

"We definitely want to experience some of the local culture, especially in terms of cuisine," says Jenny. Camilla's, an unpretentious, second-story restaurant with balconies overlooking downtown Soufrière, has excellent dinners (lobster thermidor, creole chicken), as well as burgers, sandwiches, and salads for lunch. The Stonefield's own Mango Tree restaurant specializes in fresh seafood, and every Thursday night hosts a fun barbecue ($35).

To stock their kitchen, Jenny and Heather will need to take the shuttle into Soufrière and walk to the markets on Bay Street, a block off the waterfront. They'll find all the basics, as well as island vegetables such as dasheen (similar to a potato) and callaloo (for a delicious spinach-like soup).

Jenny and Heather will want to get out of the Soufrière area at some point and are leaving the option open to rent a car for a day or two. While most agencies are at or near the airports, Ben's West Coast Jeeps and Taxi Services is in Soufrière and rents cars from $60 a day. (Foreigners on St. Lucia have to get a $21 driving permit, purchased through the rental agency.) With a car, Jenny and Heather can drive to the weekly party known as Friday Fish Fry, when the village of Anse La Raye closes off several streets, and fresh seafood and lobsters are grilled to the beat of Caribbean music. (A cab from Stonefield will cost about $30 per person each way, so it's cheaper to rent a car.)

They could also drive to the Enbas Saut Waterfall Trail, which leads through rain forest and over steep steps to falls that double as a popular swimming hole. Lucky hikers catch a glimpse of St. Lucia's rare national bird, the Amazona versicolor. Even at a good pace, hiking the entire Edmund Rainforest Trail, not far from Enbas Saut, can take three hours. But the walking is easy and straightforward, and it's not essential to do the entire hike to spot orchids and bromeliads clinging to trees, along with occasional panoramas of the coast and St. Lucia's tallest peak, Mount Gimie.

Deep into the planning, after they've booked airfare and plotted a day-by-day itinerary, the women conclude that five nights just isn't going to cut it. "We're concerned that we won't be able to do everything we want," says Jenny. "So we're thinking about staying two more nights." Changing their flights means $100 more per person--not the end of the world. They stick with Stonefield for five nights, but want something less expensive for the two extra nights, perhaps even camping. Then they book a hotel in northern St. Lucia that they had dismissed earlier: Coco Kreole, where rates start at $85. "It's an inexpensive way to extend our stay," says Heather. "And the location, near all the action in Rodney Bay, gives us a nice change of pace after Stonefield." Making a vacation longer is hardly against the law--and returning to life as responsible adults can wait.

Jenny and Heather will enjoy a Rainbow Reef snorkeling package, free of charge, thanks to St. Lucia's luxurious Anse Chastanet resort. The package includes an excursion to nearby reefs and a plantation lunch with creole specialties. A water taxi picks the ladies up and drops them off at the Soufrière port. Bring an underwater camera!

The Reazer family, who we coached in July/August on a 25-day road trip, loved staying in unusual places, like this yurt in Oregon's Fort Stevens State Park. "It had a futon, bunk beds, and heat--which we really needed," says mom Laura.