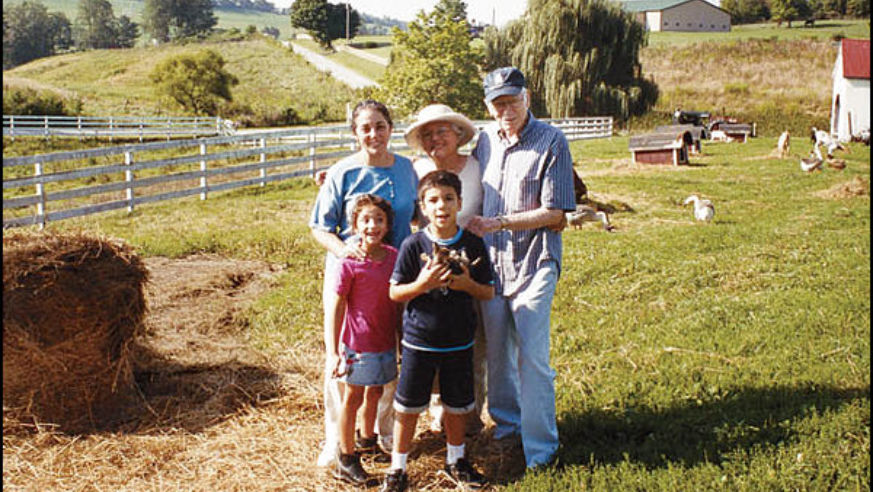 Farmstays show the grass really is greener on the other side

Any advice columnist would have said my family really needed a vacation. Over the past year, we spent far too much time at The Home Depot and U-Haul storage centers (we were renovating a house), as well as hospital rooms (too many reasons to explain). My children, Arjun and Araxi, are 9 and 7 years old--beyond the sandbox but not yet concerned about the fine line between cool and not cool. While trying to imagine what they'd most enjoy, I thought back to lessons learned from previous vacations, including the fact that spectacular scenery is for grownups. My kids love fun, hands-on activities and time to hang out together, and absolutely hate waiting in lines. For their sake and to preserve my sanity, I wished for all of these things, too. A farm with cute animals and a place to swim seemed like the perfect simple solution. The idea apparently appealed to another generation, as my parents wound up joining us.

Through the Pennsylvania Farm Vacation Association I found Weatherbury Farm, a B&B and working farm where guests help with the animals (1061 Sugar Run Rd., Avella, 724/587-3763, weatherburyfarm.com, $138 for a family of four). Owners Dale and Marcy Tudor decided after staying in various European pensions with their son Nigel that they wanted to run a B&B. While many B&Bs are filled with antiques and seek rich couples rather than families for guests, the Tudors decided they'd rather open an establishment that would appeal to children. They opened Weatherbury Farm, with a pool and six guest rooms, in 1992.

Our quarters, Mother's Sewing Room, had a black-and-gold foot-pedaled Singer machine as part of the decor, drawing Arjun and Araxi's attention for hours. They also inspected the steamer trunk, which stored extra bedding, and admired the claw-foot bathtub. I swear they never noticed the room had no TV.

After a delicious breakfast of apple pancakes and a bacon-and-egg casserole, Farmer Dale--everyone calls him that--guided us through the morning chores. We started by priming the hand pump. Anyone under 50 pounds had to put his or her entire body into this job. Araxi dangled from the handle a few times, and we managed to pump enough to give the animals their water. As we lugged buckets to the barn, my kids started talking about how hard farmers work. Geese, ducks, and guinea hens hung around in the background, and cats and kittens were everywhere. Farmer Dale showed us how to unroll a hay bale, and we fed the sheep and goats. The sheep ate out of our hands, which tickled. Arjun and Araxi used a baby bottle to give milk to a kid--the goat kind, with tiny hoofs and cute little teeth. It drained the bottle in less than a minute, and my kids were beyond thrilled.

Up at the henhouse, Farmer Dale opened the bird-size door, and chickens paraded out. We walked in the people-size door to deliver feed and water, and to gather beautiful pastel blue and green eggs. We didn't hang around long. "It smells worse than Yellowstone Park in there," Arjun said.

Once each morning's chores were finished, we had nothing in particular scheduled, though the children were given a packet of farm-related games and puzzles. We were free to explore the farm, which was always full of important lessons: On our way to the cow pasture, Farmer Marcy cheerily called out, "Remember, everything that's brown isn't dirt."

I also learned that as long as there were enough kittens to go around, everyone was happy. My kids found the side porch where more than a dozen cats and kittens gathered on drizzly days. They fell in love with Frankie, a six-week-old tabby with blue eyes who was small enough to curl up in their hands.

The hard part was getting my kids to leave the farm--and particularly, the porch with all the cats--for lunch and dinner. Pretty much every activity that took us off the farm, including a trip to an old-fashioned soda fountain, ended with the kids begging to go back.

At the end of our stay, Arjun and Araxi were given certificates that declared them Official Weatherbury Farm Kids. My parents were delighted with all the time they spent with their grandchildren. I was so relaxed I felt like I'd been to a spa.

When school started, Araxi had to do a report about what she had done over the summer. She drew a map of Pennsylvania decorated with kittens, along with an X in the southwest corner marking the farm. At the bottom of the page, she wrote: "We got to do chores!"

The farm associations of Pennsylvania (888/856-6622, pafarmstay.com) and Vermont (866/348-3276, vtfarms.org) make it especially easy to locate farmstays. Other states maintain agritourism sites--alabamaagritourism.com and California's agadventures.org, among others--where you can find farms that rent rooms, as well as ones that only welcome day visitors (for tours, tractor rides, and so on). Some farmstays are more geared to kids than others, so always ask about age-appropriate activities.