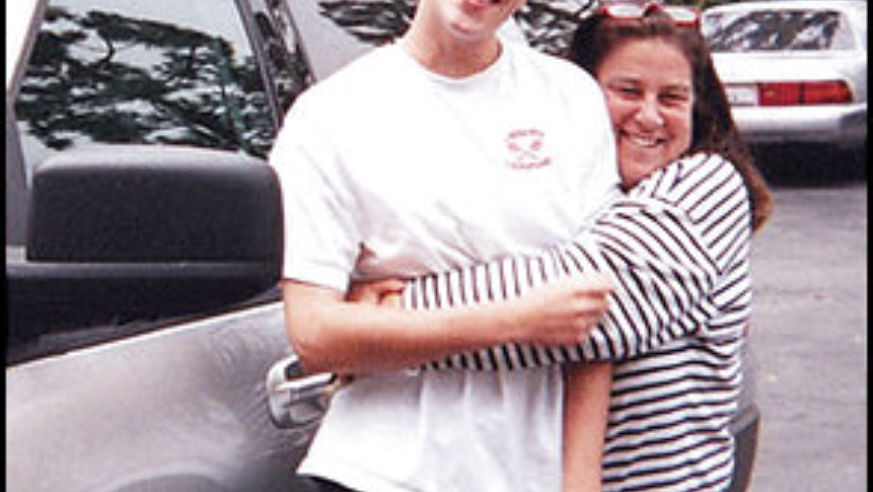 Wickham Boyle and son Henry, at the start of their road trip

Long days on the road leave plenty of time to open up.

Teenagers, and especially teenage boys, don't exactly go begging to hang out with Mom for a week straight. So when my 16-year-old son Henry brought up the idea, I jumped at the chance to spend time with him and only him.

Henry had just spent the year away from our New York City apartment, living with his tennis coach in Los Angeles and seeing if he had what it takes to compete on the junior circuit. It was a tough year for him; he was plagued with injuries and finally stopped playing. In the midst of disappointments on the court, Henry discovered a new passion: American history. Something clicked, and suddenly the struggles, people, and events he had been reading about seemed more than just stuff he had to learn for school. Henry wanted to find out more about the U.S., hence the request for a cross-country road trip on the move back home.

Over the years, I had found it increasingly more difficult to connect to Henry than to his older sister, Wilson. We gals could yap away about clothes, relationships, or social justice, and laugh or fight with equal abandon, but Henry rarely seemed all that interested in sharing. "You wish you had two girls," he'd say when pushed about giving us the silent treatment. "Two chatty girls."

In the hope of finding out more about my son--and scoring major points as a cool mom--I let Henry plan the journey. He researched the routes, chose whatever detours caught his fancy, and was free to blast hip-hop by Shyne and Jay-Z. Before entering his world, I made two requests: I wanted to visit my 90-year-old father in Durham, N.C., and for the duration of the trip, we wouldn't eat in a single fast-food restaurant.

Henry had his driving permit and was excited to pilot our giant rented SUV, which we dubbed the Dinosaur. It got awful gas mileage, but was perfect for hauling home a year's worth of detritus. The day after school ended we hit the road, heading east with the Dinosaur full of dirty laundry, far too many sneakers, five tennis rackets, loads of books and CDs, and a not-so-miniature minifridge.

The hillsides in the desert just beyond L.A. were covered with hundreds of high-tech white windmills. Their metal arms whipped in furious circles, and when we got out to switch seats, the wind they created nearly blew me off my feet. "The windmills are really cool," said Henry as he slowly navigated the dusty road. "My generation is going to face terrible shortages. I'm afraid we won't be able to drive or do anything because the resources will all be used up." I'd somehow forgotten how much I loved this kid.

We arrived at Joshua Tree National Park as the sun began to dip. On a hike to a promontory that we called "the thumb" (Keys View on the park map), Henry ran ahead, arms and fleet feet pumping up and down rocks. I arrived on top a little later, catching my breath as Henry pointed out a tiny deer mouse eating seeds in the nook of one of the eponymous Joshua trees.

The rest of the week unfurled with a mix of natural wonders, American kitsch, Southern cities, sunsets in the rearview mirror, afternoon naps in green fields, and snippets of conversation that added up to genuine discussions. We arrived at the rim of the Grand Canyon at sunset, and saw velvet-antlered elk the next morning. At a Native American swap meet, Henry dished a few tidbits he had learned in history class. "Our government herded 9,000 Native Americans into Fort Sumner in the 1860s," he said. "Can you imagine walking with your babies, animals, and all your possessions in this heat, without any water?"

In New Mexico, we saw a drive-up liquor store. "I don't think that's such a good idea," Henry joked. He then opened up, telling me about driving a friend's car home--without a license--from a party because the friend had been drinking. I told him that all things considered I was proud of him for not drinking and for facing a difficult decision.

At some point, Henry bought a tape of '80s tunes at a gas station. "Hey, Ma!" he said. "It was two bucks!" I sang every word to "Girls Just Want to Have Fun" and "Lucky Star" to Henry's feigned disgust. But soon enough he was singing along with me.

In Texas we listened as someone on a Christian radio station proclaimed Harry Potter a dire danger to America's youth. After eating fantastic steaks at Cattlemen's Steakhouse on the outskirts of Oklahoma City's old stockyards, we waddled across the street to a shop where Henry found the perfect belt buckle: a huge gold and silver oval of a screaming eagle--"cowboy bling," in Henry's words.

We hit 2,000 miles in Memphis and celebrated with a delicious rack of ribs at Corky's. Billboards on I-40 in Tennessee promised the World's Largest Fireworks Supermarket, a must-stop for Henry, especially with July 4th around the corner.

In Durham, Henry told Grandpa that we'd been to the Grand Canyon. "The big ditch?" said Grandpa. "Is that still there?" I told my father that a lot of folks ask the same question about him, and we all laughed.

We hit 3,000 miles at Washington, D.C., by which time I was singing "Pass my cash!" along with Shyne. The Dinosaur hit 3,251 miles on the odometer as we rolled into New York, with Journey crooning "Don't Stop Believin' " on the radio. And when we finally arrived at our apartment--totally exhausted, excited to be out of the car, with a blur of images in our heads--I knew we had plenty to talk about.