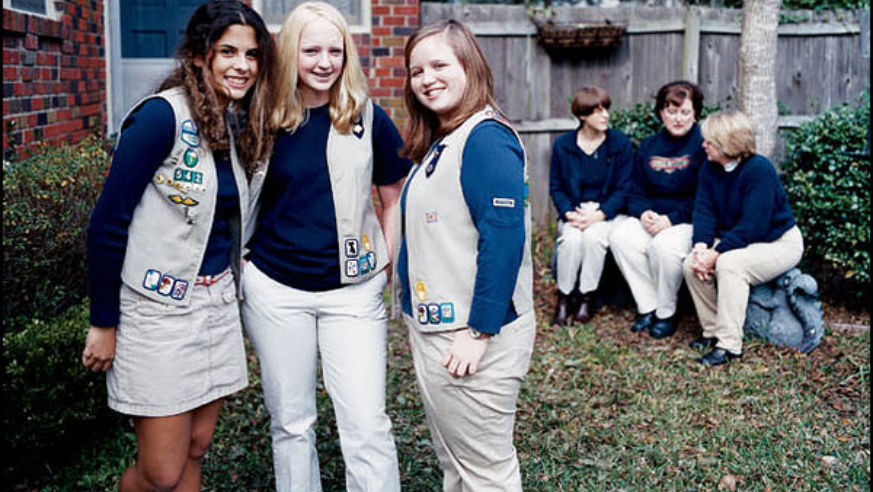 Three Girl Scouts heading to London and the Swiss alps want to squeeze the most fun out of a limited budget.

A trip to Europe has been a long time coming for three young women from Girl Scout Troop 542 of Savannah, Ga. Kaley Boyles, Maria Finocchiaro, and Caroline Jackovich have been working for more than a year to fund the vacation. "The rule in our troop is that each girl must raise her share from babysitting, chores, car washing, and so on," says Sallie Boyles, troop leader (and mother of Kaley). "They're supposed to earn the money--not be given it--to make them really appreciate things."

If there's a badge for planning ahead, Sallie deserves it. "I'm obsessive," she says. "I have to plan everything!" More than a year and a half in advance, her group sent deposits of $190 apiece for a chalet in Switzerland. Now they need to fill in the rest of the trip.

Maria thinks it would be cheapest to fly round trip to London and use a low-fare airline for a separate round trip to Geneva. She also convinces her mom to make the journey. "She hasn't gone on a Girl Scout trip for a long time," says Maria. "She had to come."

Fran Arnsdorff, the troop's other leader, rounds out the group heading overseas, with three girls and three adults. "I've been to other states," says 15-year-old Kaley, "but nothing like across the ocean." Maria's never been to Europe either, and Caroline has only visited Scotland.

They contact us with a basic itinerary of London and Switzerland--and lots of questions. The budget is $2,500 per person. Based on price quotes she's gathered, Sallie estimates that they each need about $1,000 for transatlantic airfare, $100 for flights within Europe, and $165 for the trains and buses in Switzerland. When they factor in lodging for 10 nights, food, and other fixed costs, they don't have all that much left to spend on activities or souvenirs. It becomes apparent our mission is to help the group cut costs and thereby give them more opportunities to enjoy themselves.

Looking only at major booking engines nearly half a year before departure, Sallie finds that $953 is the best she can do on flights from Savannah to London. We point the group to airfare consolidator Destination Europe, which offers a fare of $848 on US Airways for the same days.

Sallie's zeal for planning leads her to reserve nearly a year in advance at a London hostel that charges $60 per person per night. It's a good deal, but not quite as good as the London St. Paul's Youth Hostel, which costs $43 per adult, $36 for each girl, with breakfast included and an excellent location near St. Paul's Cathedral.

After consulting the handy whichbudget.com, which lists low-fare-carrier routes, we discover that EasyJet flies direct from London-Gatwick to Geneva for as little as $83 round trip on the day we search. Swiss Transfer Tickets, good for two days of rail travel within a month, can get them between Geneva and their chalet in Adelboden, and since kids 15 and under travel free with a parent, the group saves $164 compared to point-to-point tickets.

"I'm excited about going to Switzerland and seeing the sun rise over the Alps," says Maria. "The countryside looks really beautiful--a lot different than the flatlands near Savannah." The chalet where they're staying is run by the Girl Scouts, with organized hikes and sightseeing. Costs are fixed, and there's no real way for us to advise them about saving money there, so we turn to what they want to see and do in London.

Most people assume that only groups of 10 or more are eligible for special rates. But for some attractions and transportation, the troop can buy group tickets that cover a mix of adults and kids--and there's often no requirement that the people be related. Such tickets on the Gatwick Express, from the airport to Victoria station, save them a total of $50 each way compared to six individual tickets.

"We read that it's fun to take a bus tour on the morning you arrive in London, to get your bearings," says Sallie. The Original London Sightseeing Tour uses double-deckers with an open-air top level, so the group can see all the landmarks with the wind in their hair.

The girls ask about taking a walking tour, preferably one at night that focuses on creepy ghost stories or tales of Jack the Ripper. The options offered by London Walks--in business since 1960 and considered by most to be the best walking-tour outfit in the city--include Haunted London, Ghosts of the Old City, and Jack the Ripper Haunts tours, none of which cost more than $10.

"Of course, we need shopping," says Kaley. "We're looking for things that aren't too expensive." Maria chimes in with a request for good spots to "walk around and see all the little stores." For smaller shops, they might try the pinwheel of streets radiating out from Seven Dials (just north of Covent Garden), which are packed with little tea shops, bookstores, and funky boutiques. Oxford Street offers a different shopping experience not to be missed, as it's lined with huge stores such as Topshop ("The World's Largest Fashion Store," with a vast selection of reasonably priced accessories and clothes for young women) and Marks & Spencer (a grocery-and-clothing-store combo beloved by the masses), as well as HMV and Virgin Megastore, which are both loaded with CDs. London is also known for its amazing flea markets, including less expensive trinkets, secondhand clothing, jewelry, and artwork, on sale daily at the Camden and Spitalfields markets. And finally, we steer the girls to the city's excellent official tourism site, visitlondon.com, and in particular to pages on Designer Discount Stores (under "Budget") and Chic on the Cheap (under "Shopping").

"The girls don't like a lot of museum-going," says Sallie. "But they'd be willing to check out an interesting one." Since Kaley and Maria attend a school for the arts, and all three girls are into all kinds of music, a morning at Trafalgar Square seems in order. First they can review works by da Vinci, Cézanne, and Degas at the National Gallery; like many London museums, it's free. Around lunchtime, they should make their way to St. Martin-in-the-Fields, which hosts free concerts on Mondays, Tuesdays, and Fridays. Lunch prices at the church's Café in the Crypt are reasonable, and tables sit atop flat gravestones lining the floor.

In all honesty, the girls are looking forward to hanging out at the Hard Rock Cafe far more than an afternoon at any museum. Yet the Cabinet War Rooms, with its warren of underground chambers in which Churchill and his staff plotted during World War II, piques Kaley's interest. "That's awesome!" she says when we describe the layout. "I would love to see that."

Caroline is active in her high school drama club, and all three girls say they want to see one of Shakespeare's plays if it isn't too expensive. At Shakespeare's Globe Theatre, "groundlings" pay just $9 to watch a play while standing in the central open-air yard of this doughnut-shaped playhouse, a faithful Elizabethan-era reconstruction that should be familiar to anyone who saw Shakespeare in Love. "We were talking about the old theaters in class, and they sound really cool," says Maria. "We read Romeo and Juliet, and we went into what Shakespeare did and his world."

The only drawback: While the troop is in town, the Globe will be presenting Coriolanus and Titus Andronicus--a bit heavy for teenagers on summer vacation. We suggest they might be happier paying $18 for nosebleed seats at the Open Air Theatre in Regent's Park, where they can pick from a pair of crowd-pleasing comedies: The Taming of the Shrew or A Midsummer Night's Dream. The latter seems particularly fitting for the occasion.

The Girl Scouts and their chaperones will not only get to go shopping at Harrods, they'll enjoy a free afternoon tea, courtesy of the world-famous department store. Keep those pinkies in, ladies!

"Katie really felt like she got to live like a New Yorker for a few days," says Sean McCarthy, who planned a surprise visit to the Big Apple for his wife with our help (the couple is pictured in Central Park). "She was all smiles throughout the trip."