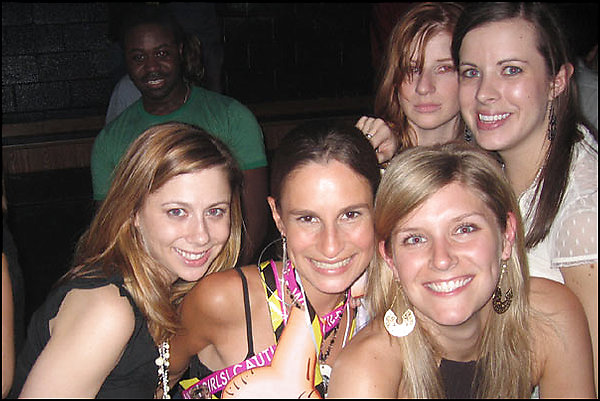 Well, that was interesting.

We started the evening off at some girl's duplex in the Ravenswood area. We shared a cab with Erica, who lives in Anne's building and who just got married last month. There were about 20 girls there, including Amy's cousins and her friends. It's odd how these gatherings tend to make women section themselves off into little cliques--it was the "college/old friends" versus the "Chicago/new friends." Not that we didn't all get along. We did, of course, because we were all chugging cheap wine.

The bachelorette party itself was exactly what you'd expect: embarrassing questions, sentimental photo sharing, and gargantuan purple sex toys. After that fun, we walked to Southport Avenue, where we proceeded with our bar crawl. The bars were much, much better than in Lincoln Park--the crowd was more our age, the venues were trendy without being obnoxious, and nothing was so packed that we couldn't enjoy ourselves. We started out at a place called SoPo's. There, we started dancing and didn't stop until three bars later. By then it was really late, so we took cabs back to--gasp--Lincoln Park to a spectacularly dirty dive bar called Beaumont's. By the time we got back to Anne's, with our friend Ginny, who drunkenly wanted to have a sleepover, in tow, it was close to 4 A.M.

Ugh. Need I say how I feel right now? It's amazing how very little excitement my body can tolerate. I need to remember that just because I'm with college friends does not mean I can behave as if I were still in college. Impressively enough, I did manage to get out of bed before 11 A.M., and moreover, played mother hen to Anne and Ginny, who had an even more difficult time waking up. We looked like a bad after-school special, all with smeared makeup and gravity-defying bedhead.

I'm leaving today, so I have no choice but to slap myself into consciousness, wash up, and get packed.

It's gorgeous outside, and Amy wanted everyone to meet for brunch at a popular spot called John's in Lincoln Park (apparently the girls don't like to explore much).

I'm at the airport now, waiting for my flight back to LaGuardia. Anne walked me from her apartment to the L train. When we finally got to the Grand stop, we said our goodbyes and I shlepped down to the platform to catch my train to O'Hare. I ended up cutting it pretty close to my flight time. But, of course, there was a delay, so here I am, half asleep. I'm exhausted.

Here's the only thing I hate these mini-breaks--once I start to relax, it's time to go home again. Although the weekend was kind of blurry and hectic, I'm sad it's over. These girls are like my sisters (I'm a miserable, bratty, only child), and whenever I'm with them, I feel so much more like myself. I rarely get to see them, and when I do, it's for one of their weddings. And that's what's up next: Memorial Day weekend, when I'll be a bridesmaid in St. Louis. At least we all had a chance to see each other without the formalwear first.

Back to day one