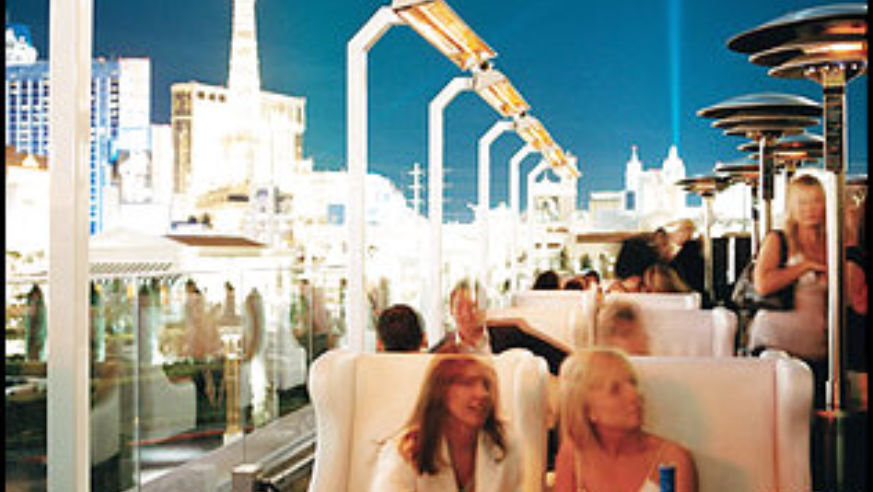 Dave Lauridsen
The terrace at Pure at Caesars Palace

How to maximize your time in America's playpen.

Stay at a hotel within a hotel

In December 2003, Mandalay Bay opened THEhotel, a separate boutique hotel east of the main property, with its own valet parking, lounge, and coffee bar (thehotelatmandalaybay.com, from $170). And West Wing at MGM Grand, which debuted last March, is a tower west of the main casino with a private entrance, lobby bar, and reception desk. Each room is only 350 square feet, but the pillow-top king-size mattresses, 27-inch flat-screen TVs, and Bose alarm clocks with CD players make them seem ritzier (3799 Las Vegas Blvd. South, 702/891-7777, mgmgrand.com, from $109).

Sandi Wilson's Texas Hold 'Em lessons, weekdays from noon to 1 p.m. at the Palms, are free and first-come-first-served. She'll lead you through a game, advising when to raise, check, hold, and fold. "When I play, I don't want the men to know I have anything," says Sandi, tossing back her blond hair. "So I act innocent and flirt." Groups can reserve Sandi for themselves, also for free, by calling poker room manager Gene Trimble (4321 W. Flamingo Rd., 702/942-7777, palms.com).

Increase your odds for shopping success

Las Vegas Premium Outlets is the closest of the three outlet malls in Vegas, and the best. It takes 15 minutes and $15 to get there in a cab, but the pickings can be worth it. Of the 114 outlet stores (plus nine restaurants), a handful--Elie Tahari, Dolce & Gabbana, Lacoste, Coach, Chanel, Theory--stand out (875 S. Grand Central Pkwy., 702/474-7500, premiumoutlets.com/lasvegas).

At Bathhouse, a spa in THEhotel at Mandalay Bay, you don't need to book a service to stay at the pools all day (though they'll waive the $35 entry fee if you sign up for anything over $50). A day pass buys all-day access to the facilities, including the red-walled gym and separate men's and women's areas, each with its own pool. There are free snacks, such as nuts, oranges, bananas, and banana muffins. After a eucalyptus steam and stint in the redwood sauna, test out complimentary June Jacobs products (3950 Las Vegas Blvd. South, 877/632-9636, thehotelatmandalaybay.com).

Only die-hard Celine Dion, Elton John, and Cirque du Soleil fans can talk themselves into spending more than $100 for a seat. Two discount ticket companies--Tix4Tonight and Tickets2Nite--sell same-day, up-to-half-price tickets to those (on occasion) and dozens of other productions every day. The selection is usually heavy on hypnotists and magicians, but as one ticket vendor noted recently, "I don't think there's a single show in Vegas we haven't sold." All available remaining seats are released at 11:30 a.m. Tickets2Nite is in the giant Coke bottle at the Showcase Mall (888/484-9264, tickets2nite.com), while Tix4Tonight has four locations (877/849-4868, tix4tonight.com).

Aim high for a photo op

At the northern edge of the Strip, the 1,149-foot-tall Stratosphere Tower has the highest observation deck west of the Mississippi. Enter the building and you'll find yourself in a mall. An elevator bank in the back goes to Top of the World, a revolving restaurant; the observation deck is one level higher. To make things all the more over the top--and back over the top again and again--there's a mini amusement park up there, too. One ride is a claw extending 64 feet beyond the tower's edge; fittingly, it's called Insanity (2000 Las Vegas Blvd. South, 800/998-6937, stratospherehotel.com, elevator $10, Insanity $8).

Hit the jackpot at dinner

Celebrity chefs' Vegas offshoots are pale imitations of the originals. Real foodie cred goes to those who know about Lotus of Siam, a 70-seat Thai restaurant in a strip mall a mile off the Strip. Chef Saipin Chutima was raised in Chiang Mai and apprenticed under a cook for the Thai royal family. She makes an incredible nam kao tod, a spicy, crispy, rice-flavored snack with minced sour sausage, ginger, chilies, scallions, and peanuts ($8). Equally impressive is the plar dook o-cha: a fried whole catfish flavored with lime and chilies (market price). When the waiter asks how spicy you like your food on a scale of 1 to 10, know that a 5 is enough to ignite a small fire (953 E. Sahara Ave., 702/735-3033, saipinchutima.com).

Sip kitsch through a straw

At Peppermill's Fireside Lounge, it's always 1974. The low-lit room is decorated with neon, mirrors, and a fire-pit centerpiece--flames erupt from a turquoise pool. Waitresses in black evening gowns look like extras from Charlie's Angels. A highlight of the cocktail list is the Scorpion ($15), a mix of cherry brandy, vodka, rum, and vanilla ice cream. It tastes like a cross between Hawaiian Punch and a Creamsicle, it comes in a 64-ounce glass with extra-long straws, and, true to its name, it can be lethal (2985 Las Vegas Blvd. South, 702/735-4177).

Skip ahead of the brunch bunch

Vegas is known worldwide for its buffets, and the Bellagio has the best for weekend brunch. There's a soup bar, bagels and lox, sushi rolls, a soft-serve ice cream station, and much, much, much more. The lines for a table are always long, but you can avoid waiting by heading straight to any open seats at the bar (3600 Las Vegas Blvd. South, 702/693-7111, $23).

Go for the gold lamé

There's a hip arts-and-antiques district around Charleston Boulevard and Main Street. It costs $1 to enter the Attic, which advertises itself as the largest vintage clothing store in the world, but the buck buys you "lifetime entry" (1018 S. Main St., 702/388-4088). Expect feather boas, go-go boots, and maybe gold lamé tops. The Funk House is a mid-century furniture store (1228 S. Casino Center Blvd., 702/ 678-6278) run by one Cindy Funkhouser. The neighborhood's unofficial den mother, she also started First Friday, a popular street party with open studios and live performances (firstfriday-lasvegas.org). A block south, 10 railroad cottages painted in an array of primary colors make up the Gypsy Caravan (1302 S. 3rd St., 702/868-3302). Inside, there's an assortment of beautiful junk, including squares of carnival glass, and, on a recent visit, authentic Stickley rocking chairs.

Promote yourself to V.I.P. status

Right now the hot club is Pure at Caesar's Palace (3570 Las Vegas Blvd. South, 702/731-7873). But joining the chic crowds on the 14,000-square-foot terrace overlooking the city involves suffering the indignity of the velvet rope--for men, anyway. Groups of girls should simply inform the manager that they'll be coming, and he'll likely guarantee spots on the list, which translates to entrance via the faster women-only V.I.P. line. Each club lives by its own set of rules: Sometimes the manager will be so kind as to comp the cover, as has been known to happen at Tryst, in the Wynn (3131 Las Vegas Blvd. South, 702/770-3375). And always ask your hotel's concierge, who should happily give out free passes to the property's clubs.