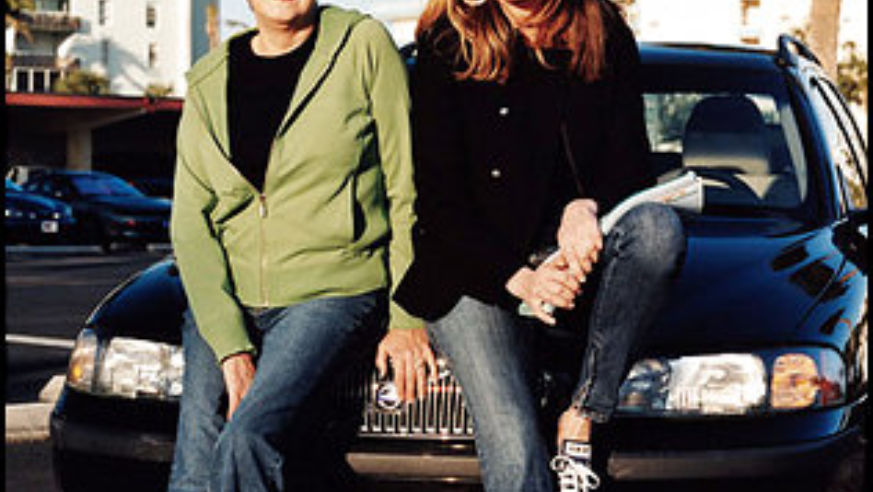 Scouring the country, this mother-daughter team has found lots of vintage gems--but most of all, they've discovered how much they enjoy spending time together.

Any woman who has watched Thelma & Louise has a similar road-trip fantasy--if with a different ending. Inevitably, my version of the daydream involves a run-down but reliable convertible, a wardrobe of perfectly broken-in Levi's and cowboy boots, and a companion (paging Brad Pitt!) to share in the thrilling discoveries of great thrift stores. Sue me, but shopping is crucial.

In a way, my fantasy has become reality--only I've swapped the convertible for a minivan, the boots for Birkenstocks, and Brad for an improbably perfect partner riding shotgun: my mother.

From last June to January, Mom and I logged more than 5,400 miles between our hometown of Cleveland, Tenn., and New York City, Tucson, eastern North Carolina, and on our most recent adventure, southwestern Florida. The trips were made possible by a few fortunate factors. Soon after Mom retired from her job as hospital volunteer coordinator, I quit my full-time newspaper gig to devote time to freelance fashion writing. We also both rented booths at a Nashville antiques mall--Mom sold vintage linens, I concentrated on clothing--giving us the reason (excuse?) for all these road trips. We're responsible for stocking and decorating the booths, so we dash around the country looking for cool stuff to buy.

I consider myself a champion shopper. I have a sixth sense for homing in on out-of-the-way stores and finding bargains. My mother taught me almost everything I know. She started me out in preschool, when every weekend we'd go to flea markets to shop for her antique wicker business. By the time I was six, Mom realized I knew my way around the fleas nearly as well as she did. She became comfortable enough to let me roam among the vendors, which was amazing. For the first time in my life, I was treated like I could handle some responsibility, and I spent hours checking out comic book dealers, digging up old clothes, and searching for crazy quilt patterns. These experiences started a lifelong obsession, and I set a goal to eventually thrift from coast to coast.

Last summer, I seized the opportunity for an abbreviated version of my goal. While visiting a cousin in Tucson, I hatched a plan to rent a car and thrift my way back to Tennessee. I'd be a shopping desperado, blazing through the deserts and pulling up in a cloud of dust to old storefronts in tiny Texas Panhandle towns. With no one to please but myself, I could shop at my own pace and take off whenever I felt like it with my booty of never-worn '40s finery.

The idea of driving 23 hours solo and footing the expenses of a 10-day haul when gas was almost $3 a gallon brought me back to earth. Asking Mom to come along was a great way to save money. As it turned out, the journey triggered a shift in our relationship, transforming the standard mother-daughter dynamic into much more of a straightforward friendship. On the road, we aren't parent and child. We're just two women at the mercy of a foldout map and the limited space in the back of a minivan.

We learned a few lessons early on. During a side trip to Nogales, Mexico, Mom zeroed in on a five-by-six-foot oil still life of a bowl of fruit. I thought the purchase wasn't a great idea, but she was so excited that I kept my mouth shut. Three days and several thrift stores later, when the van filled up, we began a nightly ritual of unloading and repacking everything to protect the painting, which I came to think of as our albatross.

I'm proud to say that I didn't complain or toss out a single "I told you so."

Patience and respect have become the hallmarks of our trips. Mom totally rolled her eyes at a giant Flavor Flav--inspired battery-powered clock purse I fell in love with in Florida, and I still can't understand why she spent $400 on beaded hippie jewelry at that flea market in Albuquerque. But we keep our comments to ourselves and let the other revel in the excitement of a score. Shopping is pretty much all we do when on the road. While in Virginia en route to New York, Mom briefly suggested a short hike to see Natural Bridge--and I quickly shot the idea down. On a previous trip, when we heeded the siren call of the great outdoors, I lost my only pair of prescription glasses. I convinced Mom that the mishap was a sign that we should stick to our primary activity. Now we get our exercise by walking loops around motel parking lots. They're not the most scenic treks, but we're usually busy discussing where we should go the next day or rehashing the stuff we've already found.

One reason we're nicely suited as road-trip partners is that Mom hates to drive, and I love it. I take the wheel 95 percent of the time, while she attempts to navigate. I say attempts not because Mom struggles with a map, but because I'm such a pain to assist. I plot out the stops using the "Thrift Stores" section of the Yellow Pages and a local map from the motel. (Secondhand shops tend to be grouped near one another, in what we call "thrift pockets.") Even if I've never been to a particular town, I always think I know where I'm going. Still, I hold my tongue and listen to the lady holding the map.

Another thing I've noticed is that I take care of my mother as much as she takes care of me. This first dawned on me in Oklahoma City. We were exhausted after shopping and driving all day in 100-degree heat. When the city lights came into view, we immediately looked for a place to stay. Mom asked me to choose; apparently all those nights sneaking 10 drunk college kids into a single fleabag room after a Grateful Dead show gave me authority. I pulled over at the first motel I saw. "Make sure they have a continental breakfast!" Mom called out as I shut the car door. Despite the motel office's bulletproof glass, I booked a $45 room.

To me, the place served its purpose just fine, even with the thin walls and sunken mattresses. After a not-so-restful night--in which the phrase "Don't let the bedbugs bite" became the source of nervous amusement--we woke up early, bathed under a feeble shower, and dried off with towels the texture of a loofah. We split before ever finding out if they served breakfast.

That day, I slowly realized exactly how appalled Mom had been. Even so, I sensed she still didn't want the responsibility of picking our motels. She's never traveled alone; friends or family have always helped in decision-making. On the other hand, I've often traveled solo, whether exploring the Australian Outback or checking into hotels using Portuguese or Italian phrases picked up from a guidebook. Mom was depending on me. And despite what I was feeling--a sense of superiority at being able to "rough it," perhaps?--her comfort was important to me. From then on, I chose motels much more carefully. We've found that Microtels are consistently clean and cheap, and some even have waffle irons in addition to the usual breakfast selections.

I now realize that one major reason I preferred traveling alone is that I didn't have to be responsible for anyone else. After the recent road trips with Mom, however, that changed. I discovered how much I thoroughly enjoyed sharing experiences with her, and I'm especially happy to be able to take care of her for once. It's also nice to have someone to reminisce with: Trying to describe the beauty of a memorable sunset or the bounty at a particularly good thrift store to someone who wasn't there isn't much fun.

So where are we heading next? Mom's intrigued with Ohio, where she's hoping to research 1940s pottery, while I'm leaning toward southern California, to check out vintage beachwear and ethnic designs from Mexico and the Pacific Rim. To tell the truth, as long as I'm with my mother, the destination doesn't really matter.