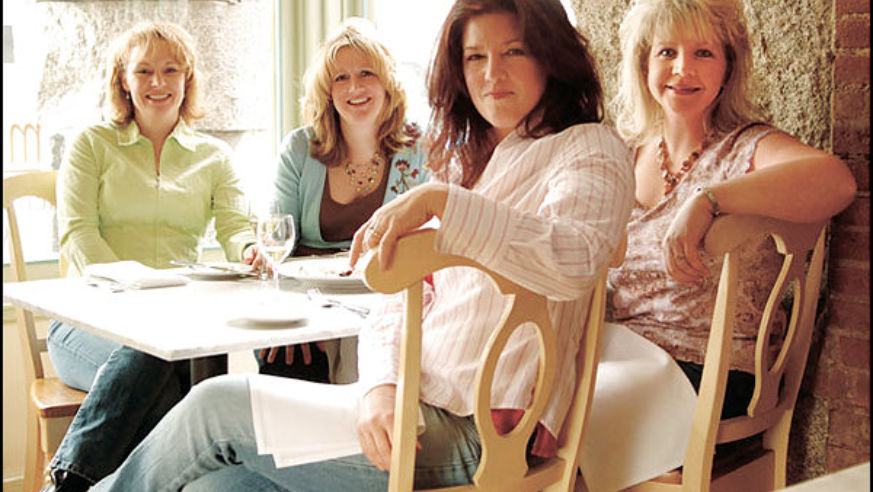 To celebrate turning 40, four friends from Idaho are going on a little adventure. Hollywood may never be the same.

They quickly became the best of friends, and over the years have pretended to be Nancy Drew and Charlie's Angels on the playground ("Somebody always got stuck playing Bosley," recalls Dalene), joined in high school plays, and even put on a faux Go-Go's lip-synch concert. "We've been told that we have our own language," says Allison. "When we get together, no one can understand us because we're laughing so hard and we know every one of the stories by heart."

These days, the friends live within an hour of one another in Idaho and Washington, and, even though they're busy working moms, they talk a few times a week and try to have dinner once a month.

Last year, Allison's mother passed away, and her friends surrounded her with support. Also present were two of her mother's sisters and four of their close friends. The older women reminisced about girls-only trips to New Orleans, San Francisco, and the Bahamas that they had taken over the years.

Inspired, Allison and her crew decided to take a vacation together--and no better time than now, when they're turning 40. "We're looking for a place where there's lots to do," says Debbie. "But we also want to be able to just hang out and be with each other." Los Angeles quickly moved to the top of the list, because it offers everything from flashy nights on the town to peaceful (and recuperative) mornings at the beach. And, since they're only able to dedicate three nights to the trip, everyone likes the fact that the flight from Spokane is a mere two-and-a-half hours.

"The only thing that makes me nervous is Tracie driving in L.A.," says Dalene. "Let's just say her car has one speed, and it's 'get out of my way.' " Dalene is kidding, but no one is excited about city driving. Unfortunately, a car in L.A. is pretty much a necessity. There's no shortage of rental cars in the city, but we point out an option many tourists are unaware of: Fox Rent a Car has environmentally friendly Honda Civic Hybrids for about $50 a day. It's not the cheapest rental, but it'll help them save on gas, and hybrids are exempt at parking meters in the city of Los Angeles.

"Leisurely mornings mean a lot to us moms," says Allison. "We love the idea of having a sitting area with a fridge so we can make coffee and eat light breakfasts in the room." They're also hoping for a good location, in Beverly Hills or Hollywood. One option is Hotel Beverly Terrace, where the Asian-inspired rooms come in various shapes and sizes, and guests can help themselves to free breakfast and round-the-clock complimentary coffee and tea. Another possibility is the slightly more expensive Chamberlain West Hollywood, a former apartment complex that was given an elegant makeover last year by the Kor Hotel Group. Every room has a gas fireplace and a private balcony, and some include sitting areas and kitchenettes.

The destination being L.A., the ladies really want to see a TV-show taping. Their first choices are The Price Is Right and Ellen. Unfortunately, tickets for The Price Is Right only guarantee a place in a preliminary line, not entry to the show. There's always a risk of getting shut out after waiting, and with limited time in town, the women don't want to risk it. So they won't have the opportunity to "Come on down" and win a kiss on the cheek from Bob Barker. Ellen DeGeneres's show, on the other hand, offers confirmed tickets via the Internet. The ladies register in advance and score tickets to a taping. "It'll be really fun to watch Ellen live," says Dalene. "She's so high-energy, just like us."

If they're curious about seeing other shows, there are a few websites that give out tickets--including HollywoodTickets.com, TVTickets.com, and TVTix.com. Seats generally only become available 30 days prior to tapings.

"We are truly tourists," says Allison. "And if we don't stay busy, we'll just end up yapping away at the bar." A friend of Dalene's insists that they take a Starline tour through ritzy neighborhoods to peek at some 40 celebrity homes. The bus drops off riders in the heart of historic Hollywood, near Grauman's Chinese Theatre, the Walk of Fame, and The Kodak Theatre, home of the Oscars. Also within walking distance is the A-list hotspot Hollywood Roosevelt Hotel. "Any celebrity sightings would be cool," says Tracie, a big people-watcher and mother of three teenage sons. "I have a growing list from the boys of who to look out for." The hotel's steak house and exclusive bar are on the pricey side, but wandering around is free, and you never know which stars might be strolling through the lobby.

Though Tracie is the only serious shopper in the group, everyone agrees they'll enjoy Rodeo Drive. We tell them not to miss nearby Two Rodeo, the outdoor shopping center built to look like an old European street, where a cobblestone walkway is lined by Tiffany's, Versace, and Badgley Mischka.

For a break from window-shopping, they might grab a bite at Urth Caffé, known for its organic menu, excellent selection of coffees and teas, and celeb clientele. For dinner, the ladies simply request good food and a fun scene. Boisterous waiters, old-fashioned checkered tablecloths, big portions of Italian fare, and a crowd of old and young Hollywood make Dan Tana's a lively favorite. Dishes are named for industry bigwigs, and fans include Lakers owner Jerry Buss and actors Leonardo DiCaprio, Drew Barrymore, and George Clooney--it's where he went after the Oscar parties this year.

"I'm looking forward to some once-in-a-lifetime event that we can talk about for a long time," says Tracie. "Anything goes, as long as we don't end up in jail." They have heard vaguely about a bar with a mechanical bull. Sure enough, two miles north of Dan Tana's is a spot that's sure to kick girls' night up a notch: The Saddle Ranch Chop House, on the raucous Sunset Strip. Inside the rowdy Western bar, "smoking" cocktails--served with dry ice so they mist--come in carafe-size glasses. Besides the mechanical bull, there's an outdoor patio and campfire pits for roasting s'mores. And the husbands don't need to know that Saddle Ranch has quite the reputation as a pickup joint after 10 p.m.

"If we were to spend one day away from Hollywood," asks Allison, "where should we spend it?" No trip to sunny Southern California is complete without a day at the beach--perhaps a night as well. If the women don't mind switching hotels, they could spend the final evening of their trip at Santa Monica's oceanfront Hotel California. It's an easy walk to the Santa Monica Pier, five minutes by car to Venice Beach, and a 30-minute drive to LAX airport.

For the ride to the coast, we recommend scenic Sunset Boulevard, past the Hollywood neighborhoods they saw with Starline Tours, and on through Westwood, home to UCLA, and Brentwood, former home of O.J. Simpson, eventually ending just north of Santa Monica at Will Rogers State Beach. They'll basically run right into Duke's Malibu, a waterfront restaurant dedicated to the father of surfing, Duke Kahanamoku, and famous for seafood, mai tais, a sandy barefoot bar, and incredible views.

Everyone knows the community of Venice for its wild oceanfront walk: muscle-heads in the outdoor gyms, tattooed punks on skateboards, loads of folks roller-skating in bathing suits, performers strumming guitars or juggling flaming torches, and shops and tiny stalls selling tacos, T-shirts, sunglasses, jewelry, Mexican blankets, and more. Beyond the spectacle is Venice's quaint Abbot Kinney Boulevard, full of a much different kind of culture, with cooler shops as well as galleries, spas, and salons. Nitespa, barely a year old, welcomes clients from noon to midnight, and a free glass of wine is included with treatments.

"Not all of us are into the spa thing," says Allison. "But this sounds good because it's more about sitting around having a few drinks during our pedicures." We can't think of a better way to end the trip: relaxed and pampered, having a few laughs--together.

Because the friends love to laugh, we hooked them up with four free tickets to Menopause the Musical, courtesy of the show. "After all, we are hitting 40 this year," says Allison. "Maybe it can help prepare us for what's ahead!"