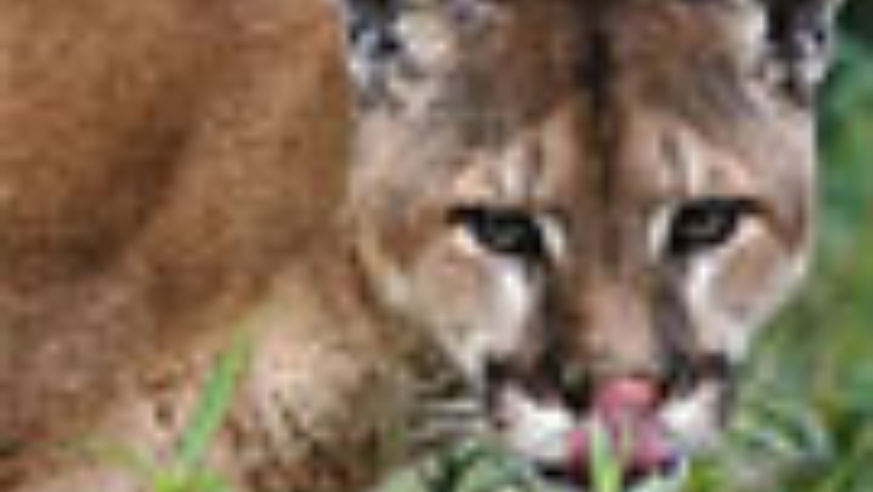 Learn some basic rules for getting along with nature.

You're more likely to get struck by lightning than mauled by a bear. But if you actually run into a grizzly, statistics are cold comfort. To be safe outdoors, follow some basic rules: Don't feed wild animals, stay in designated areas, and use the buddy system.

As for whether you should run, play dead, or hold your ground, it all depends on who's staring you down.

Avoidance: Mountain lions tend to attack smaller, isolated animals, so have kids and short adults stay close to taller people in the group (and consider leaving the dog at home). Mountain lions are most active from dawn to dusk, though attacks can happen anytime.

First Sight: Make eye contact, stand up straight, and raise your hands to present a formidable appearance. Pick up small children and retreat slowly, never turning your back.

Last Resort: Create loud noises and bare your teeth. Fight like hell when attacked. Do your best to keep the animal in front of you, as mountain lions deliver most fatal blows from behind, by clamping down on the neck.

Avoidance: Be careful when swimming in areas with sudden depth changes, especially during early morning and twilight. Don't wear reflective outfits or jewelry, which attract sharks.

First Sight: Swim or steer your boat away at an even pace. Try not to make sudden movements or splash around, and always keep an eye on the shark.

Last Resort: Fight back with everything you've got. Jab at the shark's eyes and kick and throw punches at its gills to convince it to let you go.

Avoidance: Most bears want to stay away from people, and talking, singing, or ringing a bell alerts them to your presence. Don't cook near your tent, and keep all food supplies, trash, and anything scented--even deodorant and sunscreen--locked in bear-resistant containers. Bears have been known to break car windows when they smell something good inside.

First Sight: Wave your arms above your head slowly and speak in an even, firm tone as you back away. Do not make eye contact or turn your back. Most important, do not run, as this may prompt a bear to charge. If the bear is within 15 feet and you had the presence of mind to pull out bear spray, discharge it at the bear's face.

Last Resort: Respond to a grizzly attack by curling in a ball with your hands behind your neck and playing dead. But if it's a black bear, use sticks, rocks, fists, and anything else at your disposal to persuade the bear that you're better left alone.

Avoidance: Jellyfish populations migrate slowly and can inundate beaches, so ask lifeguards about the conditions. Wearing a wet suit lessens your risk of being stung. A dead jellyfish will still sting, so don't touch one even when it's washed ashore (it'll look like a plastic bag).

First Sight: A jellyfish stings on contact; it doesn't matter if you bump into one unintentionally or you're foolishly trying to pick one up. The best defense is to keep clear of them. And don't get carried away: The stings of a scyphozoan jellyfish (the most common type in North America) are seldom life-threatening.

Last Resort: After a sting, get out of the water immediately and brush off any tentacles using a towel or other object (not your hands--you'll continue to be stung). Rinse jellyfish wounds in salt water or vinegar, which lifeguards often have on hand. Seek medical attention for severe rashes, fever, or shock.

Avoidance: Wear thick boots that are at least ankle-high. Tapping the ground with a walking stick helps scare off snakes. Bring a snakebite kit if you know you're going to be spending time in an area where poisonous snakes live.

First Sight: Maintain your distance. Many bites occur when people try to catch or kill a snake. Snakes bite humans in self-defense and rarely chase large creatures. Be cautious even around dead ones--a full hour after death, a snake's jaws can still clamp down.

Last Resort: Most snakes aren't poisonous, but once bitten you should take all precautions. Keep the wound below your heart and limit movement to minimize the spread of venom. Catalogue the snake's features to help an expert identify what kind it was, and alert doctors you're on your way.

Avoidance: Wolves are attracted by the smell of food, so when camping, keep your cooking area separate from where you sleep. Dispose of your garbage and store cooking supplies and food properly.

First Sight: Keep 300 feet away, stand tall, and flail your arms. Retreat slowly, never turning your back. Make loud noises and throw objects if it continues to approach or otherwise acts aggressively.

Last Resort: Use pepper or bear spray on a wolf that comes within 10 feet or so. If you're attacked, punch, kick, or swing tree branches or a hiking stick--whatever you can do to keep the wolf's jaws from latching onto you.

Avoidance: Moose aren't naturally aggressive, but may charge or kick when threatened or surprised, so make noise in areas where they live. Be especially wary of females during the spring, when they're calving, and bulls during the fall mating season.

First Sight: Give a moose plenty of space, and walk so that a tree, boulder, or other large object is between you. Moose aren't agile, so you should be able to run around the object more quickly than it can. Run like the wind from a moose that charges; it probably won't follow.

Last Resort: If a moose knocks you down, it may stomp or kick until it feels that the threat (you) has been quashed. Curl up in a ball and protect your head with your hands. Don't move until the moose is a safe distance away.

Avoidance: Avoid shorelines with thick vegetation. Keep a close watch on young children and small pets; they're similar in size to gators' usual prey. Be careful in particular during early evening, which is when they normally feed.

First Sight: Get out of the water now. Gators tend to stalk victims, using the element of surprise; if you flee, they won't necessarily give chase.

Last Resort: Kick, punch, and poke. Gators often mistake a human limb for a small animal--when they realize it's part of a larger creature, they generally unclamp their jaws.