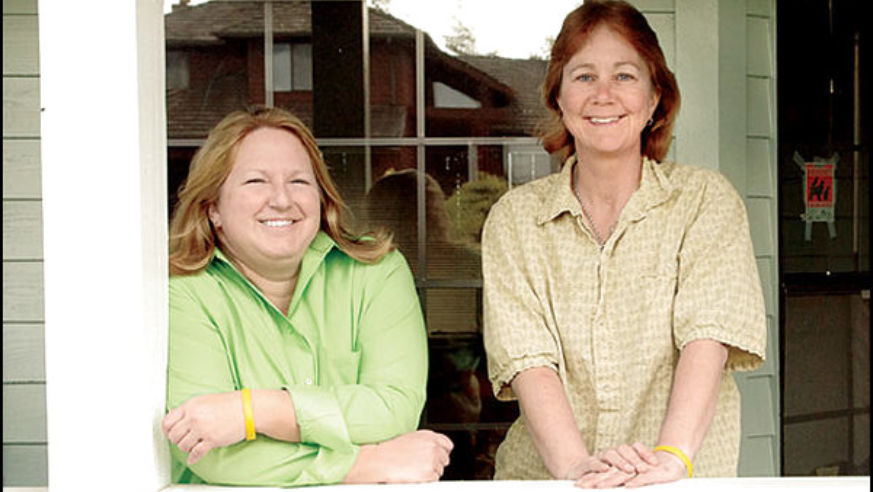 Two friends want to hike Mt. Fuji, explore the excitement of Tokyo, and mellow out in Kyoto--all in a single week

Sue Sholin and Kate Oliver have been close friends for nearly 20 years, including a decade working as lawyers in the Pierce County Prosecuting Attorney's Office in Tacoma, Wash. They're also adventurous travelers who went to Africa with a group of other women to hike Mt. Kilimanjaro in 1997. Another iconic peak, Mt. Fuji, figures into their latest travels. "Japan has been a dream destination of mine my whole life," says Kate, whose father attended high school there when his father was stationed in the country after World War II. "When I was growing up," Kate recalls, "our house had a special section set aside for Dad's souvenirs from his time in Japan, including his samurai sword."

Sue and Kate want to hike Fuji at the beginning of climbing season (July) and experience as much of Japan as possible, from the sublime to the tacky, the traditional to the futuristic. With only a week's vacation, their basic plan is to fly to Tokyo and spend a few days in the city, climb Mt. Fuji, and head over to Kyoto before returning to Tokyo to fly home. "We're stymied as to the best way to take it all in," says Sue.

Since Japan is one of the most expensive countries on earth, Sue and Kate are also looking to save money wherever possible. Before contacting us, they checked directly with airlines, and the cheapest flight from Seattle was $1,060. We advise them to contact airfare consolidator and Japan specialist IACE Travel, which has round-trip Northwest Airlines tickets available for $931.

"Are we out of our minds for attempting this without some rudimentary Japanese?" asks Sue. Not at all. While it's true that many Japanese don't speak English, their willingness to help is unrivaled--as is their politeness. If Sue and Kate are desperate, they might have the best luck asking young professional women for assistance. Talking slowly and writing things down is useful, too (especially the hotel address, so they can get help finding their way home!). In Tokyo and Kyoto, much of the signage is in English, as it is at almost all train stations. There will be times when they feel like they're wandering in another world--but isn't that why they want to go to Japan in the first place?

Riding a shinkansen, or bullet train, is on Sue's wish list. They'll have the chance to zip along on one of the 186-mph trains (and others) while using their one-week Japan Rail Passes (see Surprise! below). The important thing to remember about Japan Rail Passes, which are a terrific deal, is that they must be purchased prior to arrival in Japan.

"The double-decker bus tour around London was a great way to get oriented and find interesting locations," says Sue. "Is there a Tokyo equivalent?" While there are standard bus tours, the JR Yamanote Line (or Loop Line) does a circle around the entire city for a quick, inexpensive overview ($1.25). And it's free to holders of a Japan Rail Pass.

One could spend a month exploring Tokyo and not cover the same ground twice. With only a couple days, Sue and Kate ask us to list the real must-see attractions. The wild 5 a.m. tuna auction at Tsukiji fish market is justifiably famous, but even if Sue and Kate oversleep, they'll find plenty of exotic seafood in the colorful market until around noon. Many Westerners know Tokyo only from movies, and Sue and Kate could tour cool spots they've seen on film: the shopping and entertainment districts of Shinjuku and Shibuya, which featured prominently in Sofia Coppola's Lost in Translation; the cityscapes of East Shinjuku (Yasukuni-dori Street in particular) that inspired Blade Runner; and perhaps Gonpachi, in the Roppongi neighborhood, the basis for the House of Blue Leaves restaurant in Kill Bill Vol. 1 (it's also where Prime Minister Junichiro Koizumi entertained President George W. Bush a few years back). After dinner, they should check out Roppongi Hills, a hip complex with top-notch contemporary exhibits--and phenomenal views--at the Mori Art Museum, on the 52nd and 53rd floors. For a nightcap, the surrounding neighborhood is home to hundreds of bars, many of which are easy for non--Japanese speakers to navigate.

Tokyo is so stimulating that it's not really necessary to focus too much on the attractions--just walking and gawking is enough. The department stores in Ginza are worth poking around (patrons who arrive right when a store opens at 10 a.m. are greeted in a memorable fashion), as is the ritzy shopping strip of Omotesando. Even if the women aren't interested in Christian Dior, they'll find the people-watching unforgettable. The streets just off and behind Omotesando feel a world away and are fun to stroll. A cooler, more down-to-earth neighborhood is Daikanyama.

"We don't need to be pampered, and can do with very simple places to stay," says Sue. "We'd rather spend our money on other things." Kimi Ryokan, in the Ikebukuro district, is a popular, friendly guesthouse; double rooms cost as little as $55. The women are also intrigued by capsule hotels, so we steer them to Capsule Hotel Fontaine Akasaka, one of the few that allow women to rent miniature sleeping compartments. But we warn them about the obvious: Capsule hotels are more for bragging rights than comfort--in other words, one night is plenty.

Next on the itinerary is 12,388-feet-tall Mt. Fuji. Sue is the more hard-core hiker of the two, and she was hoping we'd help her convince Kate that they should climb the mountain from the base to the summit. The trek takes about 12 hours each way, so many hikers break it up over two days. Given the limited time Sue and Kate have, we can't get on board with the idea, especially considering that if they do the longer hike they may be too sore to enjoy the second half of their trip. As an alternative, a bus from Shinjuku can take them partway up the mountain, to the Kawaguchiko Fifth Station. Even from there, it's no easy stroll. The average climb to the summit is five hours.

Though Sue is more gung ho about hiking, Kate has a personal reason for climbing Mt. Fuji: Her uncle hiked the mountain more than 40 years ago and subsequently lost his prized Japanese walking stick. "Dad wants me to bring back a replacement stick for his brother," says Kate. Gift shops are interspersed along the path, and high-quality walking sticks cost less than $10. As Kate ascends, she can have chops, or seals, burned into the stick for about $2 apiece to prove how high she's made it.

The bullet train will speed them 320 miles in two hours and 40 minutes to Kyoto, a city that doubles as a giant museum of Japanese culture, with some 1,600 Buddhist temples and 400 Shinto shrines. The Higashiyama district is the place to go. It's dense with fantastic sites, including the popular Ginkaku-ji, with a sprawling moss garden and enigmatic sand sculptures, and the flower-lined trail along a canal at the base of the mountains, known as the Path of Philosophy. For a hearty, affordable dinner, they should go to Omen, a noodle restaurant with an English menu where the house specialty is steaming udon noodles in a rich broth. "As long as it doesn't involve eating something that's still moving, we're willing to try it," says Sue.

"Hostels are fine by me," says Sue. "They're a great way to meet other travelers." Budget Inn and Tour Club are clean, well-run, and less than 10 minutes by foot from the train station; both offer a choice of dorms and private rooms. Sue and Kate can rent bicycles at either to explore on their own, or join a bicycle tour run by the Kyoto Cycling Tour Project. At some point, the women want to experience a soak in a traditional hot spring. They might try western Kyoto's Funaoka Onsen, which has been in business since 1923 and remains popular for its wooden bathtubs, large sauna, and outdoor bathing area made of cedar and rock.

If they have any time left, Kate and Sue should head south of the train station to the Temple Tofuku-ji and its Garden of the Hojo, carefully designed with stone and moss. Or to Kyoto's Arashiyama district, where they can wander through a bamboo grove and visit Okochi Sanso Villa. Admission to the villa, which was built by a famous old samurai-movie star and boasts a spectacular view of Kyoto, includes access to its expansive gardens and a cup of green tea.

Hopefully, the weather will be clear on the train ride back to Tokyo so that Kate and Sue can catch one final view of Mt. Fuji. The Japanese believe that whoever passes by this sacred mountain should make a wish. We imagine that after whetting their appetites with this quick taste of Japan, Sue and Kate will be wishing for a return trip--with more than a week to spare.

The Japan National Tourist Organization helped us arrange seven-day train passes for Kate and Sue from the Japan Railways Group, free of charge. The passes, normally $240 apiece, will make it that much easier for the women to do (and afford) everything they want during their packed trip.

"Thank you so much for helping," wrote Sally Leiderman and Bob Woodcock after returning from their delayed honeymoon to Spain and the Azores. "The trip started out perfect and just got better. Your recommendations were all winners. Highlights included the Cook and Taste class in Barcelona, the Museum of Jewish History in Girona, and Flores, the island where Bob's grandmother was born."