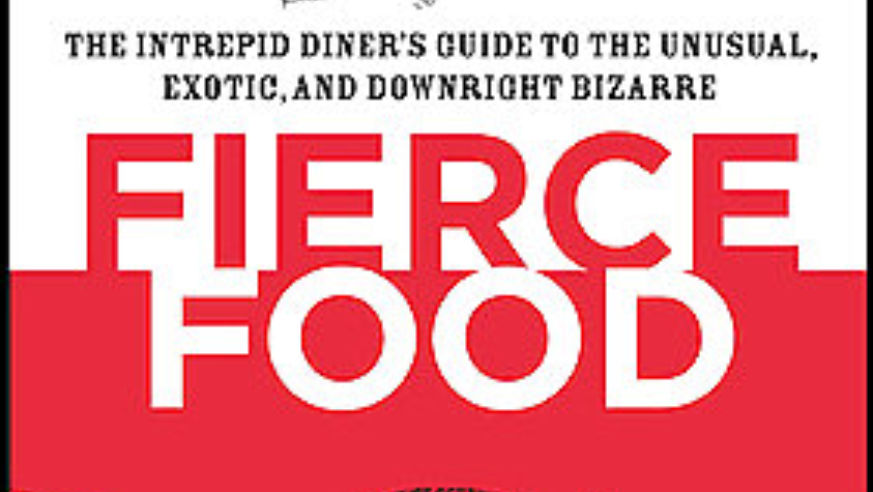 Some of the most memorable moments of a trip can come from sampling the local specialties, both good and gross. In her new book, Fierce Food: The Intrepid Diner's Guide to the Unusual, Exotic, and Downright Bizarre, Christa Weil opts for the latter. She gives lively, detailed accounts of how foods--from grasshoppers to boiled sheep's head--are traditionally prepared and what they actually taste like. (Weil herself claims to have eaten two thirds of them.) Each item is accompanied by an icon that stands for "tastes like chicken", "aphrodisiac", or "eating may cause pain/death." While it may not be wise to try these foods, reading about them is harmless, fun, and informative--at least you'll know what you're missing! To whet your appetite, here's an excerpt from Weil's chapter on tarantulas:

While "giant tarantula" might seem redundant, this is indeed the common name of the Theraphosa blondi species, native to the tropics of northeastern South America. This spider is more colorfully known as the goliath birdeater, a slight exaggeration only in that the creature prefers to eat large insects and frogs. Which it easily snags, given its legspan of thirty centimeters across--about as big as your face.

You'd think that anything as big and formidable as a giant tarantula wouldn't need defenses more scary than simply popping into view, but that's only the beginning of its capabilities. When it's time to intimidate, the spider threatens would-be aggressors by rubbing together the long thick hairs on its legs, which makes a hissing noise technically known as stridulation.

Anyone who has been out in nature or has watched the shows knows that hissing is bad news. But there are always some rookie aggressors out there in the jungle, along with some dull-witted creatures that never learn. They are about to get a lesson in whup-ass, spider-style. The giant tarantula goes from defense to offense by kicking hairs off its abdomen with its hind legs. "This," says tarantula expert Rick West, "sends the extremely fine hairs (like fiberglass wool) floating into the air towards their aggressor."

The specialized abdominal hairs, for their part, are barbed and irritating, causing respiratory distress or a rashy eruption on the skin (and eyes) if they lodge. Some experts warn that if you see bald patches on a tarantula's abdomen, you know it's a hair-kicker, so you need to be especially nice to it. As if needle-sharp missiles weren't enough of a defense system, the giant tarantula has further resources when the battle comes close. These are the scimitar-like 2.5-centimeter mandibles that the spider plunges into soft flesh, like Count Dracula working an Anne Rice fan club.

The Piaroa Indians, who live in southern Venezuela, like to roast these spiders (after luring them from their burrows by tapping the ground with a stick, imitating the footfall of another spider). The arachnids are also important to this people's spiritual activities. Nick Gordon, who was the filmmaker behind Giant Tarantula, describes his impressions of eating Theraphosa in his book Tarantulas and Marmosets: An Amazon Diary:

Lunch was about to be served. The two formidable fangs were removed and kept to one side, the large abdomen was twisted off and the contents squeezed out onto a leaf. A large blob of grey and yellow slime oozed out, containing about 40 eggs. The leaf was then wrapped parcel-fashion and placed in the hot ashes at the edge of the fire for a couple minutes. When cooked a miniature omelette was the effect. I found the taste bitter and horrible, but was extremely hungry.

Then the rest of the spider was put over the flames to roast for a few minutes and then was eaten in exactly the same way as a crab. This was delicious. It was fiddly to get the meat out but it was crab-like in texture and, I thought, tasty. The hunters ate theirs quickly but we approached ours a little more timidly. The shaman then picked up one of the tarantulas' fangs that had been put to one side and used it as a toothpick!

Rick West, the scientific consultant on this film, also took part in this leggy feast. "My impression was that the hard-boiled abdominal contents were bitter, gritty, and unpleasant while the legs, jaws and head tasted like smoky prawn meat and was very tasty--for a spider."

A word of warning: if you are sampling any of the 883 known species of tarantula (in Venezuela or Cambodia or Papua New Guinea, among other places they're served) try to ascertain that the abdominal hairs have been thoroughly singed off by the fire or, if it was cooked in a kitchen, with a blowtorch or similar apparatus. In 2001, the Internet Journal of Medical Toxicology reported on an exotic dinner in which tarantulas were served. Diners experienced irritation of the throat, due, the article concludes, to the spiders' incompletely removed hairs (this, by the way, is not a problem with old-world tarantula species, which do not possess such hairs). The article goes on to say "improperly prepared tarantula may be an irritating food. Physicians of patients who consume tarantulas should be aware of this potentially adverse effect."

An additional heads-up to physicians: if you're not based in a New World rain forest and your patient is eating tarantulas, sharpen your pencil. The symptoms are unlikely to stop there.