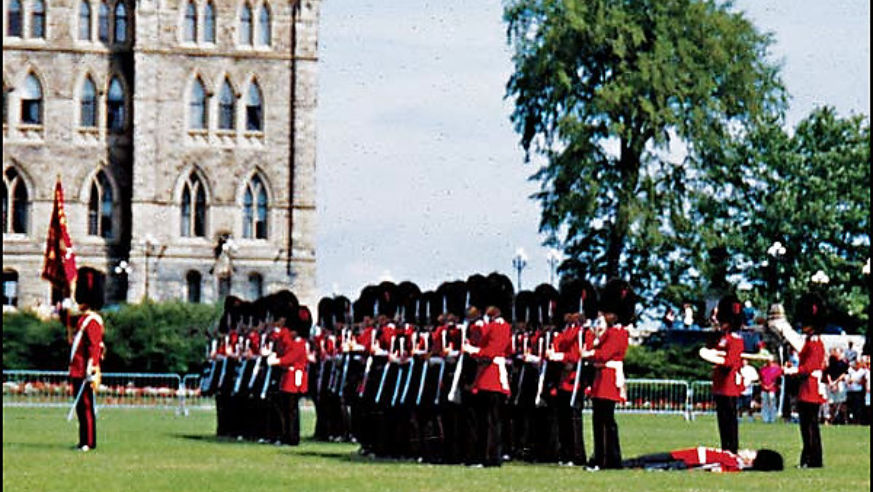 New prize: Win a vacation rental anywhere!
The best response we receive before October 17 wins a vacation rental courtesy of Rentalo.com, a search engine and directory for accommodations worldwide. The prize includes up to five nights in a house, villa, condominium, or apartment rental of your choice, up to $300 per night, as well as any taxes and surcharges. Winner must choose three destinations anywhere Rentalo represents vacation rentals, and Rentalo will provide accommodations in one of them. Prize is valid for up to four people from January 1, 2007-December 31, 2007. Subject to availability, nontransferable, nonnegotiable. Blackout dates may apply. For more information on Rentalo: 877/710-5914, rentalo.com.

In Canada, I stopped to watch the changing of the guard in Ottawa. With the sun beating down, I wondered how hot it was in those bearskin hats and whether I could maintain such a rigid posture for so long. Suddenly, a guard in the back row spat. Thinking I might be witnessing an act of treason, I kept my eye on him as he spat several more times. Then the guard spewed a river of vomit, and amazingly, while maintaining his posture, fell backward to the ground like a nutcracker. The crowd let out a gasp, but not a single soldier flinched, nor did anyone in the crowd dare to interrupt the armed military exercise to assist the poor man. The ceremony proceeded as if nothing had happened, until finally, a commander signaled for two medics to carry the soldier away on a stretcher.

Coming Soon To Late-Night Cable: Brokestrap Mountain
It was hot and humid in Puerto Vallarta, Mexico, so when my sister, my friend, and I took a horseback ride, I decided to wear my bathing suit. After two hours, my horse started galloping toward his final destination. As an amateur rider, I did my best to keep him under control. I had less success, however, with the straps on my bathing suit. Down went the right one and then the left as I trotted like Lady Godiva. I couldn't do anything to fix the suit--my hands were busy holding onto the reins! Cars paused and people craned their necks as I flew by. It wasn't until the horse reached the stables that I was able to regain composure and put my top back on. Marcia Johns, Sandy, Utah

Cruising For Chicks In China
When I travel with my brother, we ask our friends to give us a photo challenge--the harder the challenge, the bigger the prize. My challenge for Beijing was to have my picture taken in a taxi with a chicken. Accompanied by a friend who spoke Chinese, we hailed a cab. Our friend asked the driver if he knew where to get a live chicken. He asked why, and when our friend responded, "So we can take our picture with it," his eyes lit up and we were on a mission. At the second stop, we hit pay dirt. The fowl broker named a price, but as we tried to decipher what he said, he took our confusion to mean that we were shrewd bargainers, and lowered the price--from $1 to 50¢. We bought the surprisingly well-behaved chicken and headed to the taxi. The driver insisted that the chicken couldn't come inside the cab, so I held it out the window. We snapped a couple of photos, then gave the chicken back to the salesman. He looked dumbfounded that we'd return a chicken that we had just bought. But it was probably the easiest--if the most confusing--50¢ he ever made. Isaac Memmen, Louisville, Colo.

Either That Or You Just Had A New Suit Made
At six foot four and 380 pounds, I quickly got used to standing out while spending a couple of weeks in Chongqing, China. I had studied the culture before I went, and was prepared for stares and even for the few people who literally walked into street poles while looking me over. But even the travel guides didn't fully prepare me for some folks' boldness. Quite a few people patted my stomach or shoulders, and one shopkeeper took it a step further. While I was walking in front of his store, he ran out and motioned for me to stand still, and he hurried back inside. He then emerged with a tape measure and proceeded to measure how tall I was and how big around I was, each time holding it up to the small crowd that had gathered and yelling out the measurements, to their great delight. I knew enough of the local culture not to take offense--I was being paid an honor that neither I nor they will probably ever forget! Clarence Holbrook, Loveland, Colo.

Sometimes A Ciggy Is Just A Ciggy
My husband and I were in Italy enjoying a romantic dinner in a lovely little restaurant. Since I'd recently quit smoking, I was savoring every morsel. But when I finished my meal and saw a gentleman across the room light a cigarette, I just couldn't help but look at it longingly. I had always loved a cigarette after a good meal. Before we left, I went to the ladies' room. When I came out, a waiter handed me a piece of paper indicating that it was from the man with the cigarette. To my great surprise and embarrassment, the note read call me and included the name and telephone number of his hotel, along with his room number. Needless to say my husband and I left in a hurry, and he had yet another reason to add to his list of why I should not smoke. Linda King, Rensselaer, N.Y.

You can find more True Stories in the October 2006 issue of Budget Travel magazine.