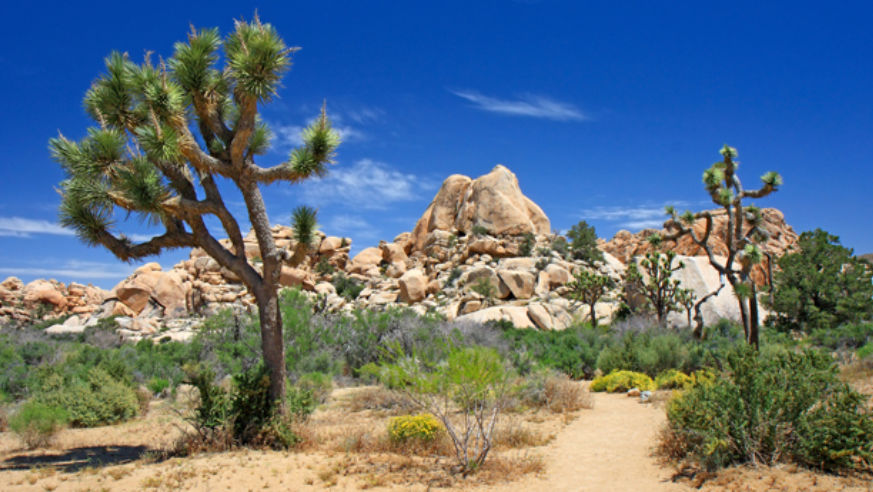 For a place that's pretty desolate, the California desert has a number of ways to get into trouble—as well as cinematic views and tremendous day hikes.

It must've been the brochure I was holding that tipped off the rental-car agent that I was heading to Joshua Tree National Park. "You know, the Joshua tree isn't a tree at all," he said as he handed over the keys to a navy PT Cruiser convertible. "It's a yucca." Legend has it that the yucca was renamed by Mormon settlers who thought its upraised limbs and scruffy-bearded appearance resembled the prophet Joshua leading them to the promised land--which seemed like a good enough reason to bring my friend Josh along on the trip.

With the ragtop down, we drive northwest on Indian Canyon Drive, and we're soon greeted by the wind farms of San Gorgonio Pass. The 60-foot-tall gray metal poles are intrusive, but striking, and in any event harnessing the wind is better than burning oil. With more than 4,000 turbines, the farm is one of world's largest, and since we're in a convertible, we can hear the propellers whirring every time we stop at a red light. They sound like gentle waves breaking in the clouds.

I'm eager to reach Desert Hot Springs, 50 miles south. Because it's built over a natural mineral-water aquifer, the town claims to have some of the world's best water. We backtrack a bit, as I'd made a reservation for a mud bath atTwo Bunch Palms--now a ritzy resort, it was originally built by Al Capone as his western hideout. Little do I know what I'm getting myself into--literally. It's called mud, but if the smell is any indication, it could be fertilizer for my mother's garden. After a half-hour-long, neck-deep soak, I'm treated to a hot mineral-water shower, a steam, and full use of the grounds, but it's not enough. I smell like manure the rest of the day. Josh thanks me yet again for renting us a convertible.

At 5 P.M. we leave Two Bunch Palms for our hotel, a pleasant spot called theEmerald Springs Resort and Spa. Our room has turquoise walls, black furniture, and white duvets, giving it a '50s vibe. We go swimming in all three of the hotel's heated mineral-water pools, in the shadow of the San Jacinto Mountains, surrounded by cacti and bougainvillea. We fall asleep early, in anticipation of our first day exploring Joshua Tree National Park.

The coffee at Emerald Springs is exceptional--can it be the water? An elderly couple from Milford, Conn., believes in its power. For 25 years now, they've wintered in Desert Hot Springs solely for the rejuvenating effects of a good soak.

Josh and I hop in the car and head east on Highway 62, toward the West Entrance of Joshua Tree National Park. At nearly 800,000 acres, the park straddles two distinct deserts: the Mojave in the north, marked by craggy Joshua trees and moon-like rock formations, and the Colorado in the south, with wide-open vistas and jagged mountain peaks. Between the two lies the transition zone, with features from both plus cholla cactus gardens and patches of spidery ocotillo.

In the town of Joshua Tree, we stop at the Joshua Tree Visitor Center. There are no concessions inside the park, so we buy lots of water. The Park Service recommends one gallon per person per day, two gallons apiece in the summer.

It immediately feels as if we've been transported to prehistoric times. Boulders the size of dump trucks sit near spiky trees, and the air is fragrant with lavender and chia, which smells like sage. We're only a few miles into the park and already we're scoping out rocks to climb. At Quail Springs Picnic Area, we pull over near a sign that explains how bighorn sheep can go without water for 14 days. Interesting enough, but all we really care about are the rocks. We begin our ascent with carefully placed steps but can't avoid getting on all fours as we lumber up the granite formations. At the top of the biggest rock, we scan the desert for wildlife--the park is home to jackrabbits, coyotes, and bobcats, plus a population of birds that includes golden eagles and red-tailed hawks--but all we get are trees and boulders.

We drive on to Hidden Valley, popular with advanced climbers--sure enough, two fearless friends are scaling a sheer rock face. Josh and I decide that the Barker Dam nature trail is more our speed. The sandy path, just over a mile long, leads past turbinella oak and California juniper to one of the park's few man-made attractions, a small lake where ranchers used to feed their livestock. It's now a watering hole for desert animals and migrating birds. After snapping photographs of the surrounding area, aptly named Wonderland of Rocks, we explore the trail's end--or whatever the opposite of a trailhead is called--which is marked by red, black, and white petroglyphs left by migrating Native Americans.

Keys View, by far one of the park's best panoramas, is about five miles south. At nearly 5,200 feet above sea level--and despite a slight haze--we can see the entire Coachella Valley, including the Salton Sea, the town of Indio, and the San Jacinto Mountains.

While eating our picnic lunch at Jumbo Rocks campground, we talk to a crunchy couple from Vancouver, camping with their 10-month-old son, Viggo, and an adventurous foursome from Cincinnati, who have just returned from off-roading through a muddy riverbed. Afterward, we go to Skull Rock nature trail--named for a large anthropomorphic formation--and scramble over as many rocks as we can. Josh and I agree: We would've loved this place even more back when we were kids.

In Twentynine Palms, we've reserved a room at theHarmony Motel--where U2 stayed when they worked onThe Joshua Tree. It's dingy at best, but hey, that's rock and roll. For dinner, we go over to the poolside restaurant at nearby29 Palms Inn(we would have stayed there if it hadn't been fully booked). I opt for the pasta primavera, made with vegetables from the inn's garden, and Josh digs into teriyaki chicken, brushed with a tangy homemade sauce.

TheCrossroads Cafe & Tavernis 15 miles in a direction we weren't planning on heading, but everyone we talk to says we have to go there. The cheery restaurant, which has local artists' paintings on the walls, is run by mother-daughter duo Bonnie and Stacee LaGassa. We grab a seat in the back and order challah French toast stuffed with raspberry cream cheese and a plate of Willy Boy Hash, with shredded beef, bell peppers, red onions, and cheesy scrambled eggs. We also buy two lunches to go and are soon making a beeline to the park.

We enter near the Oasis of Mara, then make our way through the transition zone to the southern end. The scenery morphs: Joshua trees become sparser, cacti and creosote appear, and the air gets hotter and drier. In the distance we see craggy mountain peaks (instead of smooth rock formations) and the sweeping vistas of the Colorado Desert.

Our first stop is a cholla cactus garden, home to hundreds of chest-high cacti with fine, light-green needles. From a distance the chollas appear soft and fluffy, and even though signs everywhere warn you not to touch, I can't help myself. My second mistake is wearing a sweater that somehow attracts the chollas' needles. As annoying as the barrage of pinpricks is, it still beats smelling like manure.

Less than a mile down the road is an ocotillo patch. The tall, spindly shrubs resemble bright green shuttlecocks facing nose down. In spring, like plants all over the park, they sprout vibrant flowers; it's still winter, however, and there hasn't been enough rain for wildflowers to appear. Once back in the car, we continue south and eventually reach the Cottonwood Visitor Center. In the bookstore, we read up on the nearby Mastodon Peak trail.

Like most hikes, this three-mile loop has a payoff at the summit. The Eagle Mountains are visible in the distance, and when we yell, our voices echo on and on. Proud of our accomplishment, Josh and I head back down, drive 35 miles to Indio, and crash at aTravelodge.

Our first stop of the day isShields Date Gardens, an old-fashioned roadside attraction that opened in 1924. The Coachella Valley produces 95 percent of U.S. dates, and the preferred way of eating them is in a date shake, or so I learn. I'm not a sweets-for-breakfast guy, but Shields' date shake--a blend of ice cream, milk, and two kinds of dates that've been dried into "crystals"--is delicious, even at 9 A.M. I savor it while watchingRomance and Sex Life of the Datein the movie theater. The film, made in the 1950s, explains the process of growing and picking dates, and inspires hours of "cheap date" jokes.

Chiriaco Summit, 30 miles east, is mostly a rest stop, as well as home to theGeneral Patton Memorial Museum. In 1942, the general headed a desert training center for soldiers bound for North Africa; it was the largest simulated theater of operations in the history of U.S. warfare. The museum is filled with World War II memorabilia, including 15 tanks outside.

It's lunchtime, so we grab a bite at theChiriaco Summit Coffee Shop. One General Patton burger and bowl of chili later, we're making our way towardOasis Date Gardensin Thermal. There's just enough time to work up the appetite for the second half of our date-shake taste test. We take a self-guided tour, and I can't resist breaking the rules and donning a hard-shelled costume (resembling a wide-eyed smiling date) left in a corner. I pose for funny pictures under the palm trees outside. As for the shakes, Shields's takes the blue ribbon.

We're nearly 15 miles from theSalton Sea Visitors Centerand already we smell the sulfur. Even on this beautiful day we're tempted to put the top up. The smell is due in part to the high salinity levels of the sea; it was created in 1905, when the Colorado River overflowed, flooding the Imperial Valley's salt beds. At 35 miles long and 15 miles wide, it's California's largest body of water, but of interest only to bird-watchers.

So we drive further south to Niland, gas up, and then turn around. Palm Springs is 80 miles away, and the sun is setting. We decide to race it, even though we know who always wins.

Joshua Tree National Park is at its most crowded from March through May, when the wildflowers are in bloom and the temperatures are still mild; if you're hoping to avoid the crowds, such as they are, consider visiting in the fall. Most major airlines serve Palm Springs International Airport, but if you're in the Los Angeles area, a day trip to the park isn't out of the question--the North Entrance (3.5 miles south of Twentynine Palms) is about 160 miles east of the city. Just be sure to enter the park with a picnic lunch and a full tank of gas, because there's nowhere to refuel once you've crossed the border.