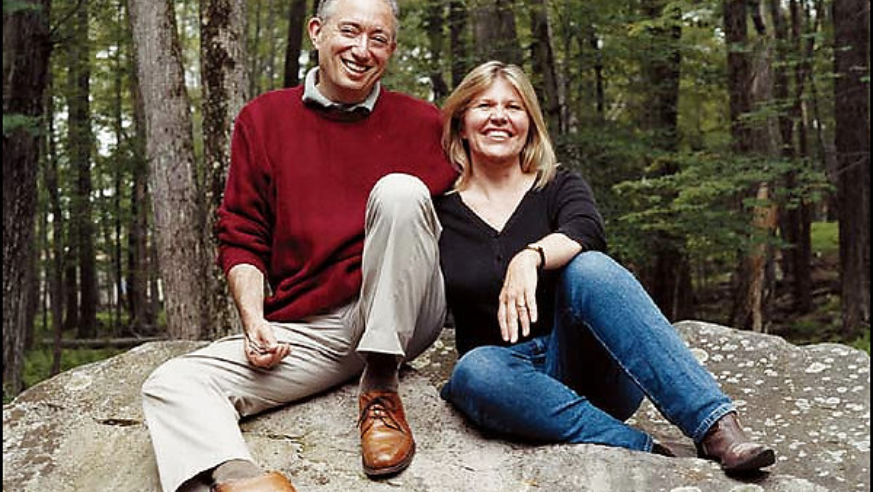 A couple wants to hike in the Swiss Alps by day--and crack open a bottle of wine with fresh, delicious food each night.

Years ago, Michael Fine, of Lake Ariel, Pa., received a brochure in the mail with photos of Switzerland's Bernese Alps. "I saw a blue sky, snow-covered mountains, and a meadow with the greenest grass," says Michael. "I thought, This place seems like it's pretty close to paradise. I want to walk there."

Michael and his wife, Tamra (Tammy), are in what she calls their "fit 50s" and in recent years have gone dogsledding in Alaska and parasailing in Fiji. They both work in the classical music field--he's a Grammy-winning producer--and Michael has been to Lucerne and Zürich many times on business. But this autumn, they're finally going to explore Switzerland's mountains. "We want to base ourselves in one place and become locals for a week," says Tammy.

The Fines are looking for beautiful scenery on hikes and a relaxing meal and bottle of wine at the end of each day. "For us, it's the smell of the air, the natural sounds, the light," says Michael. "We much prefer the sound of distant cowbells to that of traffic or nightclubs," adds Tammy.

The Jungfrau region of the Bernese Alps, renowned for its jagged peaks, green valleys, and wintertime ski slopes, offers everything the Fines seek. After we discuss mountain villages in the area with the Fines, they narrow the choice to Gimmelwald, Mürren, and Wengen. All three feature car-free streets, ample hiking trails, and epic views. "Michael was pushing for Gimmelwald," says Tammy. "But with only one hotel, a hostel, a couple guesthouses, and a single restaurant, I was afraid it might not be the best fit."

They eventually choose Mürren because it's a bit smaller than Wengen and yet still has plenty of options for lodging and food. "I looked on Google Earth and saw that Mürren was basically hanging on a mountain cliff," says Michael. "It seems relatively inaccessible, small, and tranquil."

Wondering what to pack for their visit in late September, Tammy asks, "What should we expect weather-wise?" Mürren is at an altitude of 5,413 feet, and while days are often sunny and temperatures sometimes stretch into the low 70s in early fall, warm clothes are essential. Snow is not uncommon even in September.

The Fines are tacking on the week in Switzerland after a business trip to the Netherlands. They'll fly from Amsterdam to Basel, where they'll board a train to Lauterbrunnen, take a bus to the town of Stechelberg, and finally ride an aerial tram to Mürren.

"There's a bewildering array of rail passes to choose from," says Tammy. "Which will be the best for us?" The three-day Flexi Saver Pass ($150 each, raileurope.com) is good for travel on public trains, buses, trams, and boats. The pass will cover their journeys to and from the airport, as well as a day trip to Interlaken or some other destination. It also gives free admission to most Swiss museums and a 50 percent discount on private mountain trams and railways--which will come in handy, since the mountain trams that lead to Mürren and to many outstanding hiking trails are privately owned.

Michael asks if there's someplace secure to store his bulky suitcase during the Mürren portion of the trip. Interlaken Ost, a train hub on the way to Mürren, has lockers, but they require a coin feed every 24 hours. Instead, he should check his bag with the station's luggage attendant, for about $7 per day.

"We don't need luxury lodging, but do want to be comfortable," says Tammy. "A cute chalet guesthouse is fine, and a room with a balcony and a view is wonderful." Because the Fines also like the idea of having a kitchen, they book an apartment suite at the Chalet Fontana. Denise Fussell, an expat from England, manages the lodge and is an excellent source of advice on hiking routes.

"To us, food that's fresh and regional is of more interest than haute cuisine or Michelin stars," says Tammy. A grocery store in Mürren sells the basics, and the Fines can also take a 45-minute stroll to a neighboring village, Winteregg, where the Staubbach Alpine Dairy turns milk into cheese, yogurt, and butter, available for purchase. There's no need for a map or addresses in any of these villages--with only a few houses and businesses and many friendly people who speak English, everything is easy to find.

Since the Fontana is only available for the Fines' first three nights, they book the remainder of their week at the family-run Hotel Alpina. Their second-floor room costs $129 a night and has a balcony overlooking the mountains.

"I foresee sunsets spent sipping a nice Swiss white, feet up on our railing, watching the colors change on the mountains," says Tammy.

Michael's birthday falls during the trip, and the Fines plan on celebrating with a special meal. They could head on a tram to the mountaintop Schilthorn restaurant, featured in the James Bond film On Her Majesty's Secret Service. The restaurant platform revolves 360 degrees so patrons can take in the full view without leaving their seats. The first tram leaves Mürren at 7:25 A.M., and a special James Bond 007 breakfast ($18), which includes scrambled eggs and a glass of Prosecco, is served until 10:45 A.M. Alternately, a lunch at the summit can be magnificent. Either way, the point is the view, not the food.

For a truly authentic--and filling--meal, the Fines could order a Jäger Spiess ($28), typically served in the autumn hunting season, at Restaurant Jägerstübli. The dish consists of skewers of veal, beef, and roe deer meat roasted over a small fire by the table. If all that meat sounds like overkill, they could go to Restaurant Stägerstübli for a different Swiss signature dish--like raclette ($12), a specially melted cheese served with potatoes. To complete the Swiss experience, they should wash down their cheese dishes with kirsch, a cherry schnapps.

"Hiking is the best attitude adjuster in the world," says Michael. "It gives you time to think, to be inspired." The Swiss have hiking down to a science. Trails are marked with little yellow signs that often give estimated walking times. The most popular trails are dotted with Alpine huts that have big decks and hot food. While riding the Schilthornbahn tram to or from the revolving restaurant, the Fines might get off at Birg, a midpoint between Mürren and the peak. From there they can hike 45 minutes down to the Schilthornhütte. The rustic mountain hut serves bratwurst, pasta, and other hearty dishes, which most guests eat on outdoor picnic tables.

Tammy and Michael could also hike for two hours directly from Mürren to the Rotstockhütte for a casual lunch. If they're up for it, they might press on two hours further to Sefinenfurgge pass and more spectacular views. Along the way, there's a good chance they'll encounter mountain goats, ibex, and marmots. Another trail from Mürren leads to Lauterbrunnen's Trümmelbach Falls, a set of roaring waterfalls in a dramatic slot canyon.

To mix things up, Michael and Tammy plan to go bicycling one day. "We don't want to do any technical mountain riding, just some gentle terrain," says Tammy. Easy bike routes circle Interlaken's pair of stunning blue lakes, and the Interlaken Ost train station rents bikes for $21 to anyone with a Flexi Pass.

There's no guaranteeing Mother Nature will cooperate for a day of cycling, so we suggest a backup excursion. From Interlaken, they can take a train to Locarno and board a ferry to Ascona, a town on Lake Maggiore where locals speak Italian. If they time the trip right, the Fines will arrive for Le Settimane Musicali di Ascona, an event we're sure they'll enjoy. It's a classical music festival.

Marney Jones and Tarsha White had a fantastic time in Jamaica, where Tarsha was born and raised--and will soon be married to Marney's son John. "We want to thank you for the great coaching," says Marney. A day of Jet Skiing, swimming, and lunch donated by the Goldeneye resort (where this picture was taken) was a highlight. "They gave us the use of a villa, and made us feel so pampered and so at home. We felt like movie stars!" The group also had a blast while staying at the RIU resort. "I won the Jamaican dance contest," says Marney, "with the help of rum punches!"