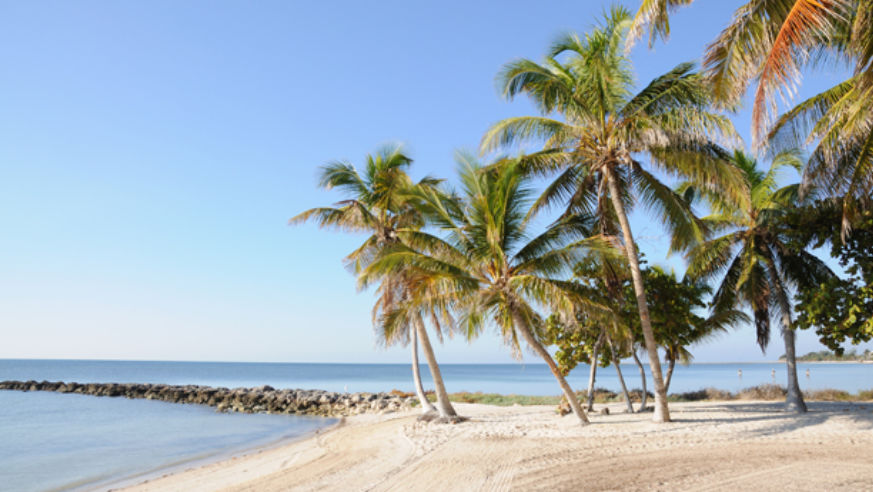 The most dramatic drive on the East Coast, from party-hearty Key West up to the Everglades.

Two years ago my parents began participating in the migratory patterns typical of many northerners, making seasonal peregrinations between Canton, Ohio, and Naples, Fla. During visits south, as I drove past one gated community after another, I often wondered where I might find more of the colorful Florida that occasionally peeks out from behind the condos. So I proposed a road trip to another part of their adopted state: the Keys.

We start not in a car, but in a boat—Key West Express operates a high-speed catamaran service from Fort Myers Beach. A short walk beyond the Key West Ferry Terminal brings us to Mallory Square, a wide plaza at the foot of Duval Street, Key West's main road. Lined with Victorian mansions and late-19th-century commercial buildings, Duval is a picturesque thoroughfare pocked with rocking-loud bars. In a shop window, I notice a T-shirt emblazoned with THE LIVER IS EVIL. IT MUST BE PUNISHED, which seems to sum up many visitors' philosophy.

A quieter side of Key West is immediately apparent when we turn onto Petronia Street, heading into the Bahama Village neighborhood. At Blue Heaven Restaurant, in a courtyard that was the scene of boxing matches during the Depression, tables sit under a canopy of trees, a balmy breeze stirring their leaves, and at least a half dozen of Key West's free-roaming chickens scratch around for crumbs. (More on them later.) The special is a lobster melt—yes, it's like a fancy tuna melt—and it sounds too good to pass up. A beer for both my dad and me and a margarita for Mom also seem appropriate. When in Rome...

Walking off lunch, we stumble upon the Kino Sandals Factory, founded by two Cuban refugees in 1966. It feels like old Havana. Ceiling fans churn languidly while men and women hunch over workbenches making stylish leather sandals, none of which cost more than $13 a pair.

There's just time to catch the last tour at The Little White House, an 1890 house on Key West's former naval base. Harry Truman vacationed there 11 times during his presidency. Our guide, a real Truman buff, leaves us all but humming "The Star-Spangled Banner," feeling immense pride in a country in which a plain-spoken haberdasher from Missouri could become thepresident.

Evening is settling in as the crowds wander toward Sunset Celebration at Mallory Square, a daily event since the '60s. We grab a margarita from a stand and wander among the crowds and street performers. The sunset takes 20 minutes, and then we head back to our hotel for a swim. The Chelsea House, our B&B, is in a converted Victorian house surrounded by a garden that makes it feel private and tranquil, though it's just a stone's throw from Duval Street.

We have dinner at B.O.'s Fish Wagon, an old truck and a shack in a corner of a parking lot in the historic seaport section of town. The fish sandwiches, on Cuban bread with key lime sauce, are legendary for a reason. Afterward, we look at the boats, decorated with Christmas lights for the annual parade and competition.

Breakfast at the B&B is basic—coffee, pastries, and fruit—so we head to the French-inspired Banana Cafe for omelets and cafés au lait. The restaurant has taken over the ground floor of a yellow house done up, like most buildings in Key West, with gingerbread woodwork. Tables spill out of French doors onto a wide porch. From ours, I spot a sign for The Chicken Store on a semi-decrepit shotgun cottage.

Approximately 2,000 feral chickens meander around the island, descendants of birds brought by the first settlers in the early 1800s. The store, which raises rescue money by selling T-shirts and artwork celebrating the chickens, was established "to smooth the sometimes-rough relations between man and bird in Key West." It's also a sanctuary where ailing chickens recuperate in relatively posh surroundings. I'm glad I'm not wearing sandals, since some of them like to peck toes. The store even ships the birds anywhere in the country as a "living souvenir." (It's also since moved to Homestead).

From there we move on to the Hemingway Home and Museum, where the writer lived with his second wife, Pauline, and their two sons from 1931 to 1940. A grizzled guide, who could have been one of Papa's drinking buddies down at Sloppy Joe's, points out Pauline's pretentious chandeliers (the one-time Vogue writer insisted on replacing the more practical ceiling fans) and the town's first inground swimming pool. It's said that Hemingway was given a six-toed cat—often called "mitten cats"—by a friend who was a ship captain; 46 cats, most of which are its descendants, live on the grounds today. As the writer quipped, "One cat just leads to another."

My mother, who loves to see butterflies in her garden, wants to check out The Key West Butterfly & Nature Conservatory. I've never experienced a live butterfly exhibit before, and I can totally identify with the screaming child across the room. My mom makes us sit on a bench, where a trio of iridescent blues flirts with her pink blouse. Her calm demeanor helps me relax. Soon, I'm equally amazed at the sight of so many elusive, fluttering beauties.

Route 1, the Overseas Highway, is a sight in itself. In the 1880s, Henry Flagler, an original partner in Standard Oil, began developing resorts along Florida's east coast. He also started buying up and connecting the state's railroad lines. St. Augustine, Palm Beach, and Miami all owe their development to Flagler's efforts. Between 1905 and 1912, Flagler constructed the Over-Sea Railroad, 156 miles of track—much of it on trestles over open water—that linked Miami and Key West. When the first train rolled into town in 1912, it was greeted by 15,000 townspeople.

Unfortunately, a fierce hurricane ripped through the Keys in 1935; an 18-foot tidal wave and 200-mile-per-hour winds washed out the embankment and mangled tracks, but the bridges and trestles stood. In 1938, the federal government took over the route and built the Overseas Highway. Route 1 is the main (and often only) road on the narrow strips of land that are the various keys. Mile-marker signs, which start counting from zero in Key West, are used as locators for addresses along the highway.

The National Key Deer Refuge Visitors Center, inside the Big Pine Key Plaza, is just north of mile marker 30.2. The endangered Key deer, a small-statured subspecies of white-tailed deer, live primarily on Big Pine Key and the adjacent No Name Key. Because the herd is so small-—only about 700—we assume the taxidermic specimens in the visitors center might be our best chance of actually seeing one. But a volunteer directs us to drive a few miles past the shopping center. About three miles along on Key Deer Boulevard, a couple of deer stroll out of the trees. Visitors aren't supposed to feed them, but these two appear to expect a snack. (We don't give in.)

Rounding a bend on Big Pine Key, we happen upon the No Name Pub, celebrated for being out of the way since 1936. The main appeal is the thousands of dollar bills on every wall. They even hang from the ceiling and rustle in the breeze. It strikes me as potentially unsanitary, but the grouper sandwiches, even at $10.50, are delicious, particularly with a cold Corona.

The marvelous Seven Mile Bridge runs between mile markers 40 and 47. Until 1982, the bridge ran on the piers originally built for Flagler; those remains stand alongside the new bridge.

In Marathon, the White Sands Inn is basic, but the rooms are decor-ated with sunny primary colors and Caribbean-inspired fabrics. Like most places in this part of the Keys, it caters to folks on fishing trips. As I set down my bags, I see a card bearing the rule: DO NOT CLEAN FISH OR LOBSTER IN THE ROOMS. I make a note to tell my parents.

The waitresses at theSeven Mile Grilllook like they could have been extras on Alice, and the walls are covered with sassy signs (such as UNATTENDED CHILDREN WILL BE SOLD AS SLAVES). Eggs come with biscuits and a side of grits—suitably hearty fare for our mangrove tour with Marathon Kayak.

After about 20 minutes, our small group turns out of the harbor and heads single file into the mangroves, through an opening I wouldn't have noticed. The gnarled branches reach across the water trail, forming natural bridges that tiny crabs scurry along. The easygoing guide, Calem, points out the marine life we're gracefully gliding over, and egrets and blue herons in the trees. He says that he often spots manatees, but we don't see any.

Later that afternoon in Key Largo, about an hour north, the sky turns overcast, so we read and rest in our rooms at the friendly bungalows that make up the Coconut Bay Resort. Down the road at Snapper's, a buzzing joint with a deck overlooking the ocean, the grilled catch of the day (grouper) proves that the fresher the fish is, the less you have to do to it. From our table, we watch a school of tarpon in the shallow water. Fearing that key lime pie wouldn't live up to the hype, I avoided ordering it for the past three days. This one is so good, however—with a crisp graham-cracker crust, creamy filling with just enough tartness, and fresh whipped cream—that I regret neglecting it until now.

The coral reef that extends all along the Keys is the third largest in the world, and John Pennekamp Coral Reef State Park, established in 1963, is the first undersea park in the U.S. It covers 70 square miles of coral reefs, sea grass beds, and mangrove swamps. We catch the 9:15 A.M. glass-bottom-boat tour. I have visions of a rickety wooden boat with a hole in the center, but the Spirit of Pennekamp is a catamaran with two large openings in the hull that resemble upside-down greenhouses. The view 30 feet down is spectacular. The reef teems with life: A guide identifies so many colorful species passing by the window that we can't keep up.

Our path home, Route 41 (a.k.a. the old Tamiami Trail) takes us through the Everglades, a haunting, brackish backwater. Gullies along each side of the two-lane road teem with alligators and waterfowl, especially lots of great blue herons, spoonbills, and snowy egrets. At the Oasis Visitor Center, a boardwalk allows for an up close look at fierce-looking gators sunning themselves.

The landscape becomes more modernized the closer we get to Naples. "The flat plainness of Florida doesn't impose itself on you," wrote Susan Orlean in The Orchid Thief, "so you can impose upon it your own kind of dream." What else have we been doing but visiting sites wrestled from nature by people with dreams both big (Flagler's Over-Sea Railroad) and modest?

Over the last few days I've spotted a book, Quit Your Job and Move to Key West, in shops, gas stations, and even at a Walgreens' checkout. There are a lot of people still eager to buy into the Florida dream.

Street addresses along Route 1 can help you know where you're headed. With a few exceptions in Key West and Marathon, addresses that end in even numbers are ocean-side; odd indicates bay-side. To figure out the corresponding mile marker, drop the last two digits and move the decimal one place to the left. For example, 57622 Overseas Highway would be located ocean-side at mile marker 57.6. (This applies to five- and six-digit addresses only.) Also, to find other guesthouses in Key West, visit historickeywestinns.com.