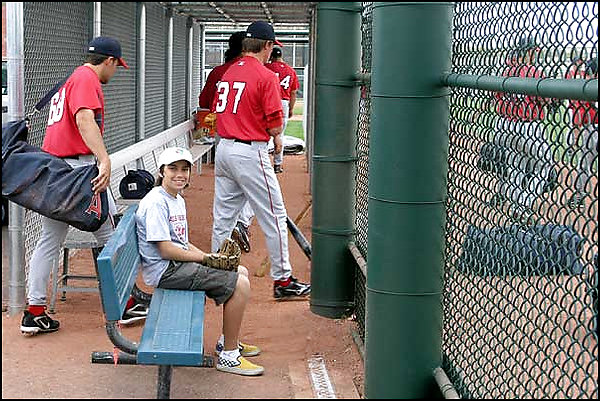 Chris Epting
Charlie Epting, 13, in the dugout at one of the intra-squad games that took place on the practice fields at the Anaheim Angels Spring Training Facility in Tempe, Ariz., last year.

Headed for spring training? Baseball expert Chris Epting fields questions on how to get the most out of your trip.

Chris Epting has written nine books, including Roadside Baseball, and has brought his family to watch spring-training games for the last eight years. He recently chatted with BudgetTravelOnline about spring-training trips, including  the best way to buy tickets, the best time to visit, the best places to find players signing autographs, and the best baseball-themed attractions near the training camps.

A: Let's start with the obvious appeal. The stadiums are compact. You can be inches away from players standing on deck, which would never happen at a regular season game. So you'll more likely experience a moment when a player will say hello to your kids, or say, "Kid, I cracked this bat, would you like to have it?" The training sessions that happen outside of the games can be even more magical. For example, when I take my 13-year-old son Charlie to spring-training camps in Arizona, he will collect 10 to 15 balls. He'll run around on the lawn out beyond the diamond. For a kid, that's heaven. That's better than watching any game. Charlie loves to learn where the balls came from. Many of the balls have been recycled from all-star games, or other major-league games, and are marked as such. For the grown-ups, of course, the games themselves are exciting. You're so up close that you can hear the chatter and how the coaches push these guys. The trip doesn't require a long commitment, either. Two days can offer a full experience.

Q: Is the trip affordable?

A: Yes, it's a bargain. Hotels are inexpensive in the parts of Arizona and Florida where the games are held. The average room rate for a low-cost, modern hotel room for a family of two adults and two kids can be as low as $75 a night. The game tickets are super cheap, from $5 to $22 a game generally.

Q: How do youbuy tickets?

A:Buy them from your team's box office or from the stadium itself on game night. [You'll find all the teams' spring-training advice listed at this Major League Baseball site (click here).] If you'd like to sit behind home plate, you may need to buy tickets from a ticket reseller, especially if your team is very popular. One large ticket reseller is Ticko. You'll also find tickets included in packages offered by hotels. If you don't want to buy a ticket to a game, you can often still gain access to the facilities to watch the practices for free. [For Arizona game schedules, click here. For games in Florida, click here.]

Q: What's the difference between the spring-training leagues in Arizona and Florida?

A: Arizona has the Cactus League. Florida has the Grapefruit League. These leagues don't correspond to Major League Baseball's American League and National League. So teams play against teams they wouldn't ordinarily see during regular season. (The New York Yankees versus the Cincinnati Reds or Philadelphia Phillies, for instance.) This is good news for fans who would like to see teams they wouldn't ordinarily get to see in their hometown stadium. For example, my wife, son, and daughter are Los Angeles Angels fans. We see the Angels all year, so when we visit spring training each year, we'll wander off to see other teams that aren't in the American League because we probably won't get an opportunity to see those teams during the season. My advice: Go as a baseball fan instead of as a fan of one team.

Q: Which state offers a better experience, Florida or Arizona?

A: Both do a good job. Arizona's Cactus League is more convenient in the sense that nearly all its stadiums are located within a 40-minute drive of each other. You can base yourself in a hotel either in, or near, Phoenix, and you'll be pretty much set. The exception is that two teams in Tempe are a bit farther away. By contrast, in Florida, stadiums are located on the east and west coasts of the state, with the exception of one stadium in the middle of the state. Given the long distances, you would be wise to commit yourself to seeing only one of those areas. One warning, though: Whether you go to Arizona or Florida, note that your favorite team may have to travel to play other exhibition games. So check the game schedules before you leave to make sure your team will be at its home stadium when you visit.

A: Spring-training lasts about a month. If your kids' school schedule allows, go during the first couple of weeks of spring training, not the last week, for the best experience. The players are more relaxed at the start of spring training than at the end. Players aren't into peak-competition mode--jockeying with each other to earn the coach's favor--because the rosters aren't being set in those first few weeks. As the month wears on, the whole spirit turns more serious towards the end, when players are being assessed and selected. What's more, all the players show up at the start, but some of the players may be sent home early, and if you arrive at the end of spring training you won't see them. By the end, some of the more veteran players may pack it in before opening day.

A: The magic for younger kids is going to happen on the days when your team might be practicing instead of playing a game. On those days, kids may have better access to players for getting autographs. They'll certainly have a better chance at catching foul balls. For kids, practice days are better because they can wander throughout the facilities and watch drills and see the players up close. My advice to parents is to look at your team's website and check the team's spring season game schedule. If the team is not listed as being on the road for a given day, it'll probably be at the training facility, though games are played just about every day. Call to confirm this information. And get there when the gates open in the morning to get a good jump on everything!

Q: What's the most common mistake made by visitors to spring training?

A: Some people only attend the games. But for the great stories, you gotta go to the rookie training camps, not just the standard games with the longtime pros. Many teams will have rookie camps with 200-odd kids vying for roughly five spots. The camps are free to watch. And they're dramatic. You know that for each kid, in their hometown, they're the best that has played locally. Each guy has won every local baseball award. Yet the competition is so fierce at this national rookie camp that most kids will go home without a position. There is no other place to see that high level of drama in the major leagues today. This is where you might see the next Babe Ruth.

Q: Any tips for bargain-conscious travelers?

A: You can wander most spring-training facilities at no charge if you pay a few bucks to park your car. My kids have bumped into players as we have toured the facilities, which is something that would never happen in a million years if we were hanging around at a stadium during regular-season play.

Q: Any tips onhow to get autographs?

A: In general, parking lots. But every team has its own prime moment when players are unguarded and willing to interact with fans. For example, in Tempe and Mesa, Ariz., where the Angels train, you can park your car in the morning and wait for the players to come out to practice before their afternoon game. They'll come out in groups. Pitchers will be training on one field. Catchers on another. Other players will be doing a different drill or activity on another part of the lawn. After the players finish and before they head to the locker room to get ready for the game, that's usually a prime time for getting autographs.

Q: Any more tips for getting autographs?

A: The best information is local. Most stadiums tap volunteer or part-time workers to help manage the crowds during spring training. Ask these folks to tell you where the best spots are to bump into players. Asking around can be fun for your kids, too. Kids like to play detective to find out the best way to enjoy the event.

Q: What are some baseball-themedsights worth seeing in the area of the spring-training camps?

A:In Scottsdale, Ariz., try the baseball-themed Don & Charlie's Restaurant and Lounge; it has lots of memorabilia. You'll be going more for the experience than the food. Meanwhile, St. Petersburg, Fla., (which is close to the games) has the Ted Williams museum at Tropicana Field, but it looks like it will be closed during spring training this year. An alternative stop is the field where Babe Ruth hit his furthest ball. The site is now Pepin-Rood Stadium at the University of Tampa (401 West Kennedy Boulevard, 813/253-3333). [For other ideas, read Chris Epting's BudgetTravelOnline article "Florida's Best Baseball Sites."]

Q: Which team do you root for?

A: I'm a New York Mets fan, but my family lives in Huntington Beach, Calif., so we're big Los Angeles Angels fans. I split my allegiance. We're going to see the Angels train in Arizona this year. For me as a grown-up, there's something very therapeutic and cathartic about this annual family trip. The time passes so slowly and blissfully. It's a true vacation because you disconnect from the workaday hustle. Maybe because it lets you empty your mind of your troubles and just eat and breathe baseball. Every time I come back from spring training, I feel even more hopeful than usual about life.