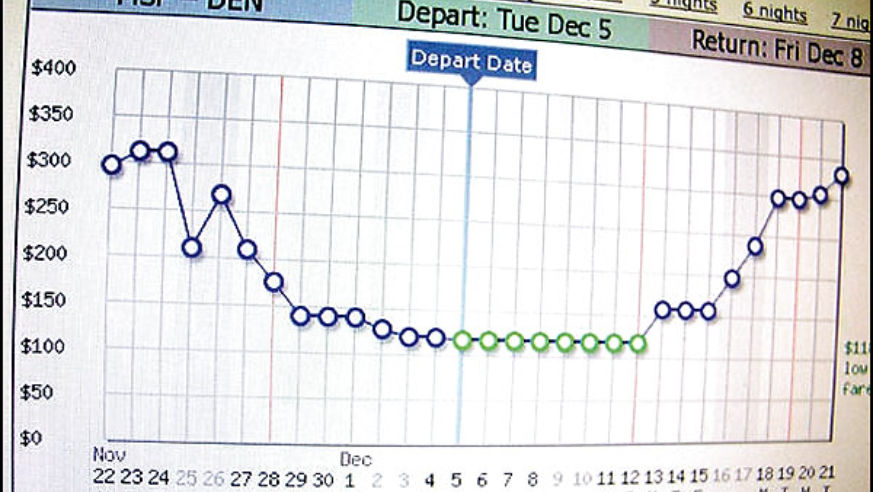 Airfares rise and fall in ways that are impossible to predict--until now, according to a company called Farecast. Its crystal ball is historical airfare data--some 150 billion (and counting) "airfare observations"--that the company uses to deduce whether prices will go up or down on a particular route. Farecast is just one of several websites taking aim at answering the age-old travel question of when you should buy an airline ticket. We tested the sites over the course of several weeks to answer an equally important question: Can they actually do what they promise?

Say you're shopping for a flight from Minneapolis to Denver departing in 30 days. After you enter the cities and dates at Farecast, a line graph shows the best prices for that route over the past 60 days, a list of current fares, and a prediction--for example, "There is a high likelihood of major price increases over the next week." Flexible travelers will be especially interested in the site's grid-view option, which displays a range of current fares available for anyone able to shift dates. For now, Farecast only analyzes round-trip domestic flights that last two to eight nights and depart within the next 90 days.

The company says it's accurate about three quarters of the time. In a series of tests conducted by The Seattle Times, however, Farecast's predictions were correct only 61 percent of the time--not much to brag about, considering that flipping a coin results in 50 percent accuracy.

If you're nervous, you can buy the $10 Fare Guard option. Let's imagine that Farecast indicates that the Minneapolis--Denver fare will drop. You can hold off on booking the trip and buy the protection policy. Farecast will then track prices for a week, e-mailing you the best fares daily. If the company is wrong and the price goes up--and you book a ticket within that week--you'll receive a check for the difference between the original quote and what you ended up paying. (If the price goes down, your $10 will, you hope, be made up for in the savings.)

Farecast, which is still in beta testing, only predicts what prices will do over seven days, which doesn't resolve the question of whether to book now or wait another month. In December, Farecast correctly foretold that a $165 ticket from Minneapolis to Denver would stay about the same for seven days. But three weeks after the initial search, we saw the fare take a dip, to $149.

Another site, FareCompare, also mines old airfares to create informative charts. Plug in a departure and arrival city, and three lines will illustrate the highest, lowest, and average prices for flights bought during each of the previous 12 months. A list of the cheapest fares in the coming 12 months will also appear, alongside ratings: Four stars means the price is at or below the lowest historical precedent, and zero stars indicates it's nowhere near a good deal.

Actually booking that flight can be difficult. After the 12-month calendar of current fares pops up, you have to click on a month, week, and day to see date-specific fares. Only then does the site search for availability--and often, there aren't any seats at the best price. If the fare does exist, departure times may not be ideal, so you have to start all over again. Itineraries and prices mysteriously disappeared during several of our tests, and extra charges vary depending on the route, making it hard to compare apples to apples.

Finally, when it comes time to buy a ticket, you're often sent to partner sites like Orbitz and Travelocity, which tack on service charges.

Large travel sites Expedia and Kayak now show the ups and downs of recent fares for a given route. While Farecast's data come from a wide range of resources, Expedia's and Kayak's numbers come solely from searches conducted on each site. For less popular routes, there may be only a handful of previous fares (if any) on which to base a decision.

Rather than predicting the future--or telling folks what they could have paid two months ago--some websites are displaying more options as to what's available right now. Travelocity has a flexible date search that finds the best fares for up to three days before and after your chosen dates. Travelocity doesn't guarantee availability at displayed prices, however, which certainly makes the feature a lot less useful. And at first there's no telling what the departure times are.

A new site, FlySpy, does far more ambitious flexible-date searches, creating line graphs that display how prices fluctuate as you adjust dates over a 30-day period. For now, however, FlySpy searches only Northwest Airlines flights from Minneapolis to 50 cities. The company plans on expanding, and we look forward to it. For modern travelers, every little bit of information helps.

1. These days it's rarely in your interest to book more than two months in advance. The exception is for high-season flights and routes with infrequent connections, when buying four or more months ahead may get you a better deal. In low season, it's OK to wait as few as three weeks before departure.

2. No matter how good a fare is at a booking engine, always see if the airline website has a better one. All things being equal, book directly with the airline.

3. Try to get an idea of what fare you're hoping to pay; Farecast and FareCompare reveal the best prices other folks have found. The cheapest seats disappear quickly, so have your exact dates, names of people going, and your credit card handy. Pounce the moment you see a good price available.