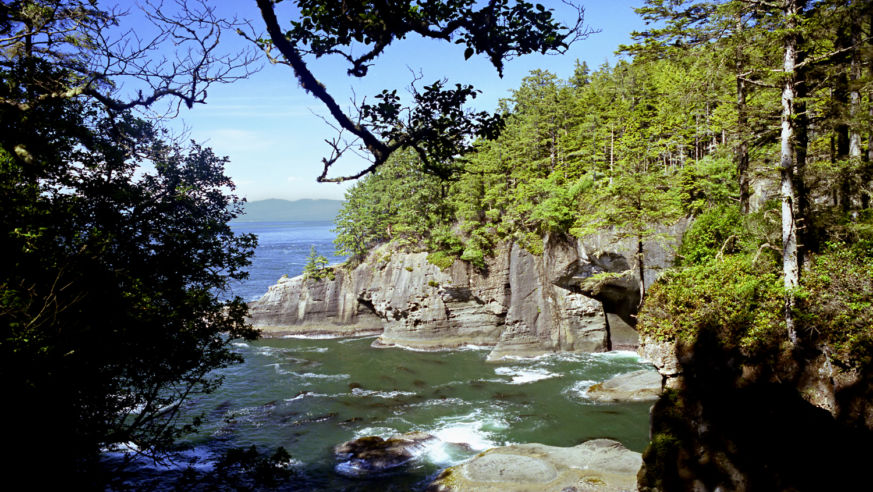 Mount Olympus is at the center of a region dotted with thick forests, remote beaches, and rejuvenating hot springs. Let the games begin.

Day 1: Seattle to Ocean Shores
Since even in the summer one rarely swims outdoors in the Pacific Northwest, spring is a perfect time to visit the Olympic Peninsula. Rates are cheap and, without the summer crowds, the wilderness feels all the more wild.

With daylight at a premium, my wife, Susan, and I motor quickly, resisting the multiple espresso choices offered by every town along the way, including Kurt Cobain's childhood home of Aberdeen (the welcome sign reads COME AS YOU ARE). We reach Ocean Shores on a blustery, fleece-and-base-layer afternoon, and it's not hard to see why the town boasts a champion kite-flying team or why firewood is still for sale.

Ocean Shores is basically a sleeping/shopping/eating hub for tourists, but today the four-lane beachfront boulevard is largely carless. We drive semi-aimlessly toward the marina at the tip-top of Grays Harbor. We weren't really planning to visitOcean Shores Interpretive Center, but hey, it's right here--and a lot bigger and more well-rounded than the quaint small-town museum that we expected. There are rooms of shells and bones and fossils, a preserved eagle's nest, all kinds of bird-watching information, and a taxidermic specimen known as the Passaround Bear--because, as a volunteer tells us, it's been displayed in a handful of local establishments since the 1920s. We also learn that Pat Boone and Ray Charles used to hang out and perform in Ocean Shores back in its 1960s heyday.

A short walk from the museum isDamon Point State Park, where theCatala, a former freighter and "botel," has been buried in the sand since 1965. Storm erosion has brought some of it back to the surface, but since last year it's been fenced off so that the oil still remaining in the wreck can be drained. A big portion of Damon Point is also closed off as a snowy plover nesting habitat. One path to the water is available. We trudge along the dark, gravelly sand, fail to spotany of the baby seals we've been instructed not to pet, and then flee the wind for a nap at theHoliday Inn Express.

Emily's Restaurant, inside the Quinault Beach Resort and Casino, provides the answer to the question, Where are all the people? We've come for the salmon, which is either farmed or caught wild by members of the Quinault Nation. The fish is served in the traditional style on a wooden plank the size of a cutting board; it has a decent smoky flavor but is a bit dry for my taste buds. I win back half of what it cost at a fancy electronic slot machine, despite the fact that I don't really understand what constitutes a jackpot.

Day 2: Ocean Shores to Neah Bay
The hazelnut-encrusted French toast atOcean Crest Resort in Moclips is so good and rich I barely use the freshly zested orange butter. The restaurant (which is currently closed) sits high on a bluff, with 131 wooden stairs that drop through the trees down onto flat, wide-open Sunset Beach. We walk off breakfast but don't linger, as theQuinault Rain Forest awaits.

After an hour's drive we pause in theQuinault Mercantilestore to sock away some sandwiches; the owner, fisherman and would-be retiree Chuck Coble, says he loves this neck of the woods more than the national park's Hoh Rain Forest because there, the best scenery comes only after long hikes. "Here," says Chuck, "it's 31 miles and you can see it all by car." Funnily enough, our waitress at Ocean Crest told us she prefers the Hoh for the exact same reason. Since we already have a hike planned for tomorrow, Susan and I are down with Chuck's perspective.

"Have you seen the tree?" Chuck asks. No, but we're about to: The World's Largest Sitka Spruce--191 feet tall and just an inch shy of 59 feet around, with an enormous root system--is at the beginning of the Quinault Rain Forest loop drive. Then South Shore Road rambles past homes and farmland--Rainy Daze Farm, the Wild Ass Ranch--before resuming alongside the Quinault River.

At the 10.8 mile mark we cross the river and continue down North Shore Road, which winds and drops into a denser, lower-hanging canopy. We picnic in a meadow by the ranger station, toss our trash into a bear-proof bin, and proceed on foot along the Maple Glade Trail, a half-mile circuit of seemingly boundless forest with maples, mosses, hemlocks, spruces, and, as Susan dubs them,Jurassic Parkferns.

U.S. 101 returns us right to the coast, where we pause for gas, espresso, salmon jerky, and views of pounding surf. We later stop at a supermarket in the logging town of Forks, having gathered that the peninsula's most charming locales are short on services, while the towns with services lack charm.

Further up the highway, a series of four signs explains a bare patch in the usually dense state forest: CUT SOME TREES, TO HELP THE COUNTY, WE PLANT SOME MORE, FOR FUTURE BOUNTY. "Burma Shave!" Susan and I blurt out simultaneously, joining, no doubt, thousands before us.

Our destination for the night is Neah Bay, the northwesternmost point in the continental U.S. "You're at the end of the world," says the goateed desk clerk at theCape Motel & RV Park, which doesn't aspire to be anything more than a place for fishing buddies to bunk down with a 4 A.M. wake-up call. The clerk mentions that some people in town like to say Neah Bay is actually thebeginningof the world, but he tells them: "You haven't been very many places."

Day 3: Neah Bay to Sol Duc Resort
"I'm sick and tired of all these restaurants with beautiful ocean views," Susan mock-complains. This one isWarm House, owned by the Makah Nation (alas, it's now closed). We're not there two seconds before an older fellow wearing a baseball cap that says NATIVE AMERICAN joins us in our booth.

Over coffee and sticky buns, Ed Claplanhoo, age 78, tells us all about theMakah Cultural & Research Center, which displays the mud-slide-preserved treasures of a 500-year-old Ozette Indian village. The Makah tribe began working with archaeologists at the site in 1970, and ultimately they unearthed 55,000 artifacts. The research center, which opened in 1979, is a truly impressive facility that also helps the Makah stay connected to their traditions, including whaling--after its 1999 whale hunt, and subsequent animal-rights protests and media coverage, the tribe became somewhat infamous.

What we're really in the area to do is walk to Shi Shi Beach, often touted as one of North America's most remote beaches. "It's one of the most beautiful hikes there is," Ed tells us, though he's unable to give us any further tips: "Don't ask me, I've been there twice in my lifetime!" Used to be the only legal way to get to Shi Shi was by hiking 11 miles up the rocky coast, in time with the tide pools; or you could trespass on private land. These days, a two-mile trail is laid out with stone and blocked off with logs. A $10 permit, sold at shops in town, is required.

The hike follows roads that were put in during World War II so the coast could be defended from a Japanese attack. The paths are narrow and muddy, though I don't mind the slop too much. While I'm hardly a technical hiker, it's nice to have to contemplate my every step, Zen-like, in order to avoid sludge and puddles.

The beach itself is lovely--foamy surf crashing onto rocks, big cliffs above, driftwood that's been washed to Louisville Slugger smoothness--but really, Shi Shi is a place you want to overnight. Then you can hike three miles further to the famous rock formation Point of the Arches, maybe catch some fish, go tidepooling, and camp in total isolation. Next time.

Truth be told, the beach views from the road between Neah Bay and Sekiu are fantastic on their own. Right around mile marker 14 we cruise past a yard full of multicolored objects that demand investigation; we go back to findBirdhouses Etc., a store with hundreds of adorable structures, some with old Washington-state license plates as roofs, all laid out in the yard. STEALING HURTS TWO HEARTS, MINE AND YOURS reads a hand-painted sign above a drop box.

Our barracks is a cozy cabin at theSol Duc Hot Springs Resort, which first opened its doors in 1912. It's 12 miles inside Olympic National Park and has a slightly chintzy Catskills feel, but it also has the Catskills' peacefulness and mountain air. The four pools--three hot (98 to 104 degrees; one of them is for kids) and one cold--look like any other hotel's spa and swimming area, except of course they're spring-fed, and just what we've been wanting after a half-day hike and two hours in the car. Deer nuzzle up against the surrounding fence as we squeeze in as much soaking as we can before the restaurant closes at 9 P.M.

Day 4: Sol Duc Resort to Seattle
Susan has had enough outdoor exertion. She hangs back with a book while I tool around in a little yellow kayak in Lake Aldwell, about an hour's drive from the resort. It's another crisp, blue-sky morning--somehow we haven't needed rain gear the whole trip--and the wind provides just enough chop to keep my paddling honest. I'm working up a little sweat even as my hands get cold from dipping in the 50-degree water.

The man-made lake is scheduled to disappear circa 2009, when two dams will be removed as part of the Elwha River restoration, but that doesn't make it any less appealing. I share the lake with just one fisherman, who is in an inflatable catamaran. I paddle out a ways for a view of the jagged white peaks of the Olympic range.

Arriving in the hub city of Port Angeles is jarring--has it really been just 48 hours since we last saw a fast-food chain?--but the downtown has quirky grit as well as tourist-friendly commerce. We replenish our caffeine supply and head to Sequim (pronounced squim), the self-proclaimed lavender capital of North America.

The gift-shop cottage atOliver's Lavender Farmappears closed, but soon Don Oliver, a gray-haired gentleman, emerges, explaining that the door is shut tight so his quail don't get inside. "There'd be white spots all over the floor," he says. A former lawyer and policeman, Don started the crop with his wife, Claudine, in 1999; they now have 10 different varieties and 2,100 plants. We're too early to self-pick (harvest is in July), so we instead buy jars of shaving soap and hand cream.

What better way to cap off 500 miles of driving than to let a boat captain handle the last leg? Though knockdown-strength gusts keep us off the deck of theBainbridge Island Ferry, the view of the Space Needle and the rest of Seattle's skyline is as pretty as the untamed beauty fading behind us.

Finding Your Way
There's nothing on this trip a normal car can't navigate, but certain bumpy side roads will be slow going. Renting an SUV for $20-$30 more per day is not a bad idea. Got an extra few days? Linger in Port Angeles, where you can drive up mile-high Hurricane Ridge for some hiking, go to Port Townsend and whale-watch in the Strait of Juan de Fuca, or ferry over to the cute city of Victoria, B.C.