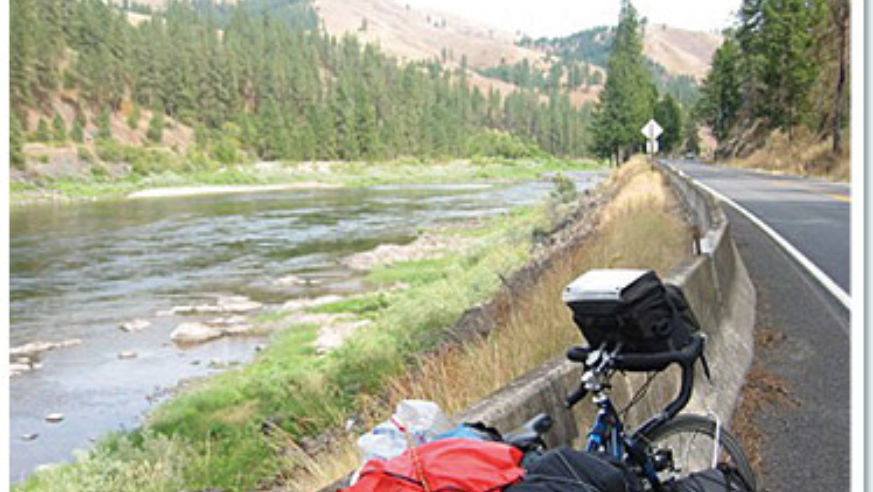 No matter where you live, you've likely thought about hitting the open road and seeing what else is out there. Ever consider doing it on a bike?

Two things happen when I drink Scotch with old friends: Believing I can speak Spanish, I attempt to do so at completely inappropriate times (such as to a Birmingham, Ala., policeman after hours of tailgating); and I say things I often end up regretting, like "I cried during the final episode of Friends." And so it was in 2005 that I found myself in a dimly lit sushi joint asking my confused waitress for a dessert menu--"¿Cuál está para el postre?"--and then blurting out to all within earshot, "I'm thinking of cycling cross-country. By myself."

Alcohol aside, the idea had appealed to me for as long as I could remember. And I'd just sold my tour company after 20 years of guiding bike trips in Europe, so I finally had the time to embark on the journey. But my declaration on that particular night in May meant that in order to take advantage of summer weather, I'd have six weeks to plan the trip. Not to mention train. I wasn't in great shape, but I was confident that I could ease my way into the tour, strengthening the requisite muscles en route.

I bought an armful of maps (detailing food, lodging, and bike repair shops) from Adventure Cycling Association, a nonprofit, bicycle-travel advocacy group, and pieced together a route that began in Seaside, Ore., and finished near Portland, Maine. While I had a rough idea of my trip's pace--70 to 80 miles per day for roughly two months--

I wasn't locked in to any kind of schedule, having purchased only the one-way plane ticket from Chicago to Portland, Ore. If I became tired, I'd rest; if I got hungry and could find a store, I'd eat. (Noting the scarcity of facilities along certain stretches of road, I did pack a jar of peanut butter and a dozen energy bars.) Weather would be a factor, so I'd follow the forecasts closely. Other than that, I had no preconceived notions of who--or what--I'd encounter along the way. I simply looked forward to a grand adventure.

I arrived in Oregon with more than 200 pounds of gear. For those without experience in bike touring, there's one word for this: stupid. After a week of masochistic punishment, my thighs bulged to weight-lifter proportions, so I shipped 80 pounds of stuff home--including 17 pairs of underwear.

Two weeks into the ride, I celebrated my birthday outside The Dalles, Ore., near the Columbia River Gorge, a majestic canyon that carves through the Cascade Mountains. Temperatures that day peaked at 107 degrees, and it wasn't until I had cycled 80 miles that I found somewhere to sleep. As I paid for my room, the innkeeper, Pam, mentioned a wine-tasting dinner scheduled for later that evening. Nearly three dozen people were coming to the inn to sample cuts of grilled Washington beef that would be paired with the Northwest's finest vintages. "Count me in," I said, hardly believing my luck as I dragged my weary body upstairs for a nap.

It was at least 120 degrees in my third-floor room, and I nearly wept with joy when I saw an air conditioner in the window. I flipped its switch to high, and instantly the power went out. Pam came running up the stairs and knocked on my door: "I told you not to turn on the A/C! We've been having major circuit problems!"

"I didn't touch it," I lied, glancing down at my hand, which was now turning the knob silently to the off position. "I'm not sure what happened." (So that's what she was telling me as I filled out the registration card and daydreamed about milk shakes.) Pam hustled downstairs to find candles and flashlights, which she distributed to the other guests; the wine-tasting event was canceled. Sheepishly, I walked to a nearby gas station and shopped for dinner--a can of Beefaroni, which I ate while standing in the parking lot. Happy birthday to me.

I quickly fell into a routine, waking up sometime between 6:30 A.M. and 8:00 A.M. Breakfast was simple, usually no more than a banana or energy bar bought the night before. I was sometimes tempted to linger near the motel's continental breakfast spread, especially when it offered waffles. But more often than not, 90 minutes after opening my eyes, I was packed and on the road.

Not long into the trip, two things started to stand out: the endless roadside traffic-death memorials, and the many FOR SALE signs scattered among front yards, storefronts, and farms. Although the memorials made me shiver--I tried not to dwell on the risks inherent in a solo bicycle trip--it was the FOR SALE signs that I found most depressing. Anyone who watches the news knows that today's economy is tough on family farmers and small-town shopkeepers. But you tend to forget that sometimes when you live in a city where lots of people with BlackBerrys permanently attached to their palms order $5 cups of coffee without batting an eye.

In a rural Minnesota bar, I met a 55-year-old man whose shoe store had gone bankrupt several years back. He'd drifted through odd jobs, and his wife left him after he defaulted on their mortgage. He was earning $6 an hour as a farmhand--and he paid the same $3 for a gallon of gasoline that you and I pay, in order to drive 50 miles round trip to work six days a week. Despite all of this, he seemed genuinely interested to hear about my journey and even insisted on buying me a beer--not allowing me to return the favor. "Welcome to Minnesota," he said, raising his can to mine.

I'd break for lunch in the late morning or early afternoon, at whatever facility was most convenient. I tended to favor gas stations, as they allowed me to watch my bike while I shopped--a concern when all of your belongings are visible to passersby--and to talk freely with locals. (It's amazing how many people stop to chat when they see you dripping sweat, gulping Gatorade, and leaning against a bike that's stuffed with over 100 pounds of gear.) Sandwiches or SpaghettiOs were convenient and carb-filled, and relatively easy on my stomach. I once ate a four-burrito lunch at a Montana Taco John's--though I regretted it exactly 42 minutes later. It's safe to say I'll never be allowed anywhere near the E-Z Mart in Havre, Mont., again.

Sadly, that wasn't the last of my health problems. At about the 1,500-mile mark, somewhere in North Dakota, I decided to tackle my trip's first century ride--100 miles in a single day. The route was flat and uncomplicated, and I was anxious to gauge my fitness level.

After 70 miles, I stopped to rest in the parking lot of a diner. What a great day, I thought to myself, looking out onto the open prairie. I wanted a photograph to capture the moment, so I grabbed my camera and began framing the shot. As I took a step forward, a surge of pain shot up my side. I looked down and saw that a planter, its edges trimmed in razor-sharp rusted metal, had gouged my leg. When you can see muscle and tendon, you know you need a doctor.

I quickly bandaged myself and cycled 30 miles to my overnight destination--Williston, N.D.--where I found a hospital. "Quite a flapper you've got there," announced the ER doctor as he surveyed the deep V shape carved into my shin. He expressed interest in my trip, and we chatted as he attended to the wound. One tetanus shot, 10 stitches, and a 14-hour nap later, I was back in business.

My appetite, thanks to all the cycling, was limitless. In Walla Walla, Wash., for example, I ate two large pizzas--plus a salad, a pitcher of Coke, and a slice of apple pie--in one sitting. At the next table were four teenagers who shared a medium pizza. One of them asked me to autograph his menu after I'd finished. I loved the all-you-can-eat Chinese buffets that popped up everywhere (I stopped at two in North Dakota alone), but with the quantity of food I was consuming, I'm not sure the restaurant managers loved me back. Almost every night, I treated myself to an ice cream at a Dairy Queen or convenience store. And believe it or not, I was still losing weight.

Labor Day morning, in Petoskey, Mich., I awoke with searing abdominal cramps, my body scrunched in the fetal position. No amount of bad shrimp lo me in could produce this kind of discomfort.

"Kidney stone," explained the doctor at the local hospital. "A big one, too."

My bike trip came to a temporary halt; I'd need to pass the stone. Based on its size and location, this could happen in one of two ways: Either I'd pee it out, or I'd undergo surgery. When I learned that the latter would require a "fiber-optic instrument inserted into the penis," I asked directions to the nearest drinking fountain--I'd pass the stone myself. As far as I'm concerned, my urethra is exit-only.

One week and 400 gallons of water later, nothing. Another exam indicated that I was developing a mild kidney infection, so surgery was necessary. Fortunately, the stone was retrieved easily. But I still had to recover for another week before getting back in the saddle. Being waylaid in Michigan for two weeks turned out to be a blessing. It recharged my batteries, providing me with an even greater appreciation for the remainder of my trip--not to mention Class II narcotics.

I reached the Atlantic Ocean just south of Portland, Maine, on the 73rd day of my journey, roughly 3,800 miles from my starting point. (My odometer had broken somewhere in Minnesota.) I laid my bike down near the surf, my mind racing. I'd anticipated the moment for weeks, wondering how I'd feel upon seeing the Atlantic. Despite more than 10 weeks of cycling by myself day after day, standing on the deserted stretch of beach was the first time I truly felt alone.

My mind immediately flooded with memories. I thought about the young woman I had met at an archery range in rural Wisconsin who was sharpening her bow-handling skills in preparation for hunting season (I had stopped to watch, intrigued). And the Oregon man traveling with his young grandsons, whom I met at a state park campground. We dined together under the stars, and his grandsons helped me load my gear the following morning, running after my bike for hundreds of yards, shouting encouragement as I pulled away.

Of course there was also the drunk Montana guy who, while sitting next to me at a ramshackle saloon, decided to lecture me about race and religion. I surreptitiously made sure my necklace was tucked safely under my T-shirt. It had a pendant on it representing the Jewish symbol for life. If he had asked about it, I'd have pretended to be a mathematician and claimed it was the symbol for pi.

The America I'd seen included a patchwork of faces and stories that continues, even 18 months after my return home, to make an impression. I was welcomed wherever I went and never heard a harsh word directed my way--though God knows how hard people may have laughed when I was out of earshot.