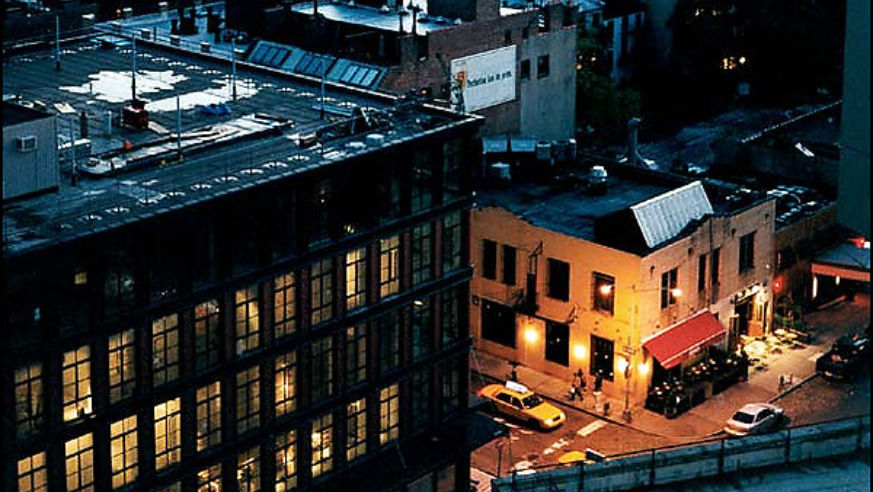 Where to Kick Up Your Heels
Grown-up drinks: On every table at Pegu Club are droppers with lime juice and mixers for individualized drink calibration--if the obsessive bartenders didn't master your concoction from the get-go.

Outdoor seating: Overlook the Meatpacking District nightlife scene without ever leaving it at Plunge, the poolside rooftop lounge of Hotel Gansevoort.

Till midnight: Italian wines and paninis are served at both of Bar Veloce's intimate, counter-and-bar-stool outposts.

Till 3 A.M.: On the 20th floor of an office tower, 230 Fifth is a 20,000-square-foot club on two levels, with Versace-meets-Versailles decor and a spectacular terrace with 500 chairs.

Till dawn: Les Enfants Terribles is a French-African restaurant by day; later, it's a hotspot for those in the know.

Something you'll regret: Kitschy Mexican joint Tortilla Flats rocks all night, especially after 1 A.M. on weekends, when margarita pitchers are $5 off.

Must-See Museum Show
The Whitney's Summer of Love: Art of the Psychedelic Era--paintings, album covers, posters, photographs, and sculptures that came out of the social changes of the 1960s and '70s.

Streets That Are Made for Shopping
Elizabeth Street (bet. Houston and Spring): independent boutiques with stylish heels and dresses.

You Gotta Do at Least One . . .
Walk across the Brooklyn Bridge; then wander through the neighborhood of Dumbo, stopping for pizza at Grimaldi's and dessert at Jacques Torres Chocolate.

See the Manhattan skyline from the Staten Island Ferry (it's free!).

Venture up to the three-floor art deco observation deck at Rockefeller Center--it reopened in 2005 as Top of the Rock, and the views are wow.

Row a boat around the Central Park Lake for a lazy afternoon.

Shops You Can't Find Everywhere
Patricia Field Boutique: The store of the stylist and fashion guru behind Sex and the City stocks her own label and those of her favorite designers.

Kate's Paperie: The company's five Manhattan locations are filled to the brim with unique note cards, calendars, journals, handmade wrapping paper, and racks of fine stationery; the SoHo store is the best.

We Love Brunch
The quintessential uptown New York brunch destination, Sarabeth's is renowned for its signature pumpkin muffins and scones and the mighty eggs Benedict.

Pamper Yourself
Bliss's flagship spa in SoHo is where the brand got its start. New on the menu: a soaking-and-scrubbing for your achy feet (it's called Heel Magnolias, natch).

Sweet Fix
Chef Will Goldfarb regularly changes the menu at his dessert-only restaurant, Room 4 Dessert. Particular favorites include layers of flavors in a champagne flute (above), and dessert flights--one plate with four variations on a theme.

Psst . . .
Avoid the mile-long lines at the Times Square TKTS booth by buying discounted Broadway tickets in advance at playbill.com and theatermania.com.

Home Base
Rooms at Hotel Gansevoort, in the popular Meatpacking District, come with down duvets, feather beds, and 400-thread-count Egyptian-cotton sheets. And there's a spa downstairs when you need some TLC.

The Bentley Hotel has bright, airy rooms--and the hotel gets bonus points for being near Bloomingdale's.

The suites at the Doubletree Guest Suites Times Square overlook the Theater District and fit up to six with two beds in one room and a pullout sofa in the other.

At the end of an easy-to-miss Lower East Side alley, Freemans is a reliable hipster hideaway in a former carriage house where the food is definitely better than it needs to be: The stuffed prunes wrapped in bacon, called devils-on-horseback, are an out-of-this-world appetizer.

Try Something New in New York
Fly through the air at Trapeze School New York. It's exhilarating, as anyone who saw Carrie do it on Sex and the City knows. 917/797-1872, newyork.trapezeschool.com, classes from $47.