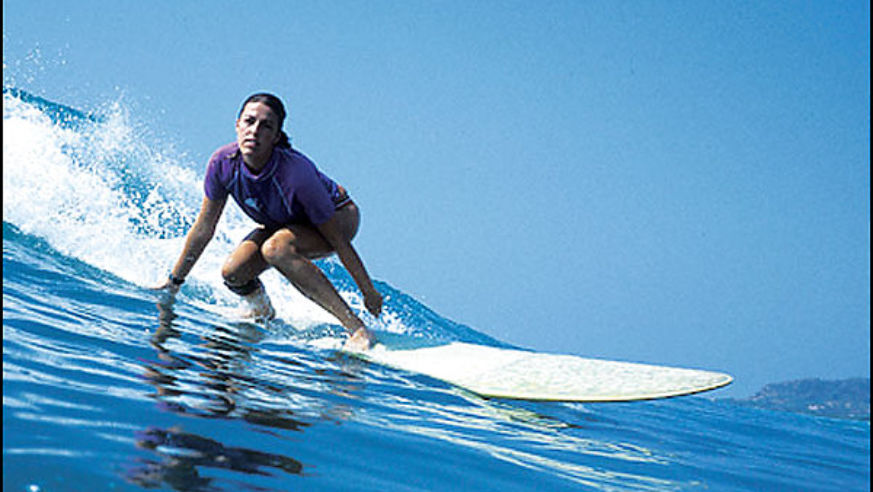 If sailing doesn't float your boat, here are 11 other women-only ways to try something new--because who cares if you look like a fool when you're with friends?

1. Stir It Up So many women were coming to cookbook author Deborah Krasner's Vermont Culinary Vacations that she set up three-day weekends for just the girls. Martha McKinnon, 43, of Land O' Lakes, Wis., went last June with her sister Brenda Garrison, of Denver. "I learned how to make pizza in a wood-burning oven, and that olive oils can be as varied as wine," says Martha. You stay in an 18th-century barn converted into a five-bedroom home. 802/387-6610, culinaryvermont.com, $1,325 for accommodations, lessons, meals, a farmers market visit, a massage, and yoga instruction.

2. Hang Ten "We make girls out of women" is the motto of Las Olas Surf Safaris for Women, a "reverse finishing school" outside of Puerto Vallarta, Mexico. Started by Bev Sanders in 1997, Las Olas has taught 2,000 women how to ride waves. "You feel like a real surfer, even though you're just learning," says Laura Roche, 36, of New York City. 831/625-5748, manifestasafaris.com, from $2,295 for six nights in a beach bungalow, lessons, a one-hour massage, equipment rentals, and--to keep--an anti-rash wet-suit top.

3. Spin Your Wheels Last summer, WomanTours launched its first bike tour of Cape Cod and Martha's Vineyard. The five-night trip averages about 30 miles of cycling per day. Two sisters from Oregon, Elaine Al-Hadi, 47, and Karen Matthews, 53, went on the trip. "On Martha's Vineyard, all the roses were in bloom, and we could smell them as we rode by," says Elaine. 800/247-1444, womantours.com, $1,690 for five nights' lodging, 13 meals, ferries to and from Martha's Vineyard, and van support; bike rental $160.

4. Horse Around For Becky Shabec, 56, of Elk Grove Village, Ill., the horses were the main draw at Adventures in Good Company's weeklong ranch getaway in Ovando, Mont., which includes riding, fishing, hiking, and visiting a ghost town. "I rode as much as I possibly could," she says. Becky, who went alone, knew everybody by the end. "My roommate and I have been e-mailing back and forth," she says. 877/439-4042, adventuresingoodcompany.com, from $1,895 for seven nights' lodging, meals, most activities, transfers to and from Missoula, Mont., and tips for ranch hands.

5. Pass the Bug Juice You'll feel 11 years old again after archery lessons, tie-dyeing, and s'mores around the campfire at Camp GetAway, outside Big Bear, Calif. (There are also spa treatments and yoga.) "She played musical chairs like a demon!" says Marietta Harris, 46, of her older sister, Michele Walker. The sisters, residents of northern California, also won an award for playing red light, green light. Guests stay in shared cabins, hike in mountains, and participate in skits--check the website for footage of women learning Michael Jackson's "Thriller" dance. 310/471-3138, campgetaway.com, from $295 for two nights' lodging, five meals, most activities, and a souvenir T-shirt.

6. Chill Out Up North Several times a year, Equinox Wilderness Expeditions hosts women-only adventures in Alaska and British Columbia. Owner Karen Jettmar guides many of the trips. The company offers some coed trips, but the women-only expeditions keep gaining in popularity. "I felt very safe, which is always a major concern when you're in the backcountry," says Ira Nicolai, 41, of Vancouver. "The guides took care of the group really well." 604/222-1219, equinoxexpeditions.com, from $550 for the Whistler snowshoeing tour, which includes three nights in a chalet, all meals and park fees, and transportation to and from Vancouver.

7. Row Your Boat When paddling around the San Juan Islands of Washington State, you're likely to spot orcas, otters, and eagles. "You know that feeling when someone's watching you? We turned around and saw harbor seals following us," says Barbara Smith, 41, of Helena, Mont. Outdoor Odysseys leads three-day, women-only sea kayaking trips from San Juan Island several times a year. The groups camp two nights in double tents on a beach that's only accessible by boat. 800/647-4621, outdoorodysseys.com, $495 for meals, equipment (except sleeping bags and pad), instruction, and guides.

8. Rock Out One of the first tours offered by Adventurous Wench when the company started back in 2003 was to Sedona, Ariz. The three-day trip remains popular: It includes visits to ruins of an indigenous settlement, hikes, and either a Jeep tour or a private ceremony at one of the area's vortices. Barbara Abshire, 59, of Irvine, Calif., loved the Jeep tour. "It was just like a thrill ride!" she reports. 866/419-3624, adventurouswench.com, $795 for two nights' hotel, airport transfers, two dinners at restaurants in town, two breakfasts, and two picnic lunches.

9. Ride the River AdventureWomen has a six-night motorized rafting trip through the Grand Canyon. "It was the most fabulous experience I've ever had," said Molly Beach, 65, of Schererville, Ind. A mother of five, Beach has always been an adventurer. "It's not for high-maintenance women," she says. "It's about experiencing the outdoors and being independent, and those are the types of women that you meet." 406/587-3883, adventurewomen.com, $2,850 for guided hikes, a helicopter flight out of the canyon, three meals daily, the first night's accommodation at the Cliff Dweller's Lodge, and use of two-person tents for the other five nights.

10. Reel 'Em In "Many women don't feel very confident. They say, 'I'm not very good.' And I say, 'Would you ever hear a guy say that?' " asks Cecilia Kleinkauf, who prefers to be called Pudge. The owner of Women's Flyfishing, Pudge has been leading trips for 20 years. Her operation offers several trips and classes from February to October, ranging in price from $700 to $2,850. One particularly popular trip is the three-night excursion to Brooks River in Katmai National Park for viewing bears and fishing for salmon, rainbow trout, and grayling. 907/274-7113, womensflyfishing.net, $2,150 for Brooks River trip, including airfare between Anchorage and the park, three nights' stay at Brooks Lodge, instruction, and gear (meals not included).

11. Strike a Pose With only 10 guests per session, Patricia Brown's Body Prayers is an intimate weeklong retreat at the Rolling Meadows farm in Brooks, Maine. Days are filled with meditation, yoga, long walks, and wholesome meals. "I'd taken maybe three yoga classes my entire life," says Mara Burns, 36, of Center Sandwich, N.H., who went to Body Prayers in August. "But I wanted to know more." For four days of the program, participants are asked to maintain silence. "The women always end up wishing there'd been more silent time," says Brown. 888/666-6412, bodyprayers.com, $840 for all meals, activities, and yoga instruction.