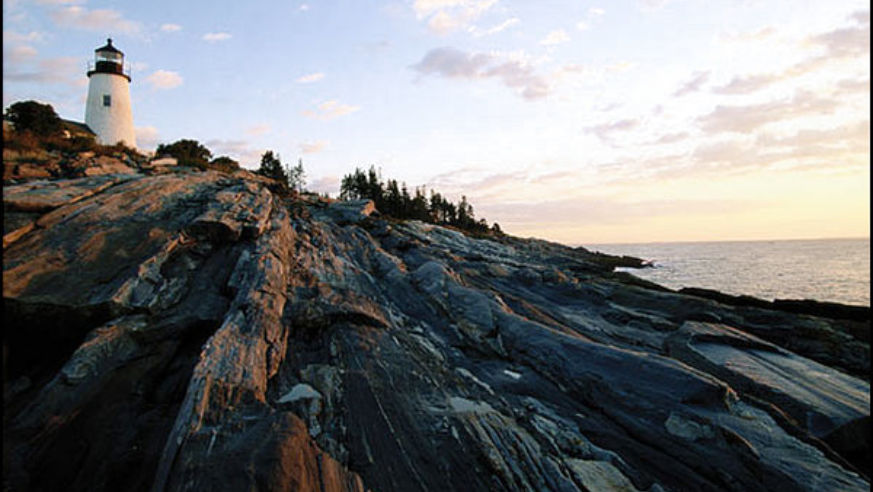 The 1827 lighthouse at Pemaquid Point

Even for non-fishermen, life on the Maine seashore revolves around the water—and you don't need a lighthouse to find a view worth marveling at.

I've always hated lobster. My memories of childhood vacations in Maine are clouded by recollections of sitting grumpily at the picnic table of lobster shacks, morosely longing for a hamburger. My girlfriend, Frances, was of another mind. She prepared for our drive up Maine's Mid-Coast--from Portland to Penobscot Bay--by trying to work out ways to incorporate lobster into every meal, including breakfast.

I was far more eager to revisit the Maine I loved from my past: offshore islands, Victorian fishing villages, the gargantuan L.L. Bean flagship store, and meandering drives along the narrow peninsulas. As for my feelings about lobster, I have to admit I became a begrudging convert: By the end of our trip it was me--claw cracker in one hand, plastic cup of Maine microbrew in the other--eyeing the largest guy in the tank.

Our first order of business heading north out of Portland on Route 1 was a visit to DeLorme headquarters in Yarmouth. I had borrowed my dad's DeLorme map of the state. He'd highlighted his favorite drives, circled memorable towns, and scrawled notes all over. It was as good a resource as any guidebook, but this was to be my trip, and I wanted my own blank slate.

DeLorme's lobby houses the world's largest spinning globe--130 feet around, over 41 feet high. At one-millionth scale, the massive globe has all the world's topographical information, but leaves out political borders. It's Earth as the astronauts see it--all I could think was how huge the Pacific Ocean actually is.

We stopped next at the Desert of Maine, a kitschy 40-acre plot of miniature sand dunes. The site formed in the 1880s when over-farming depleted the soil covering a glacial sand deposit. Along with the striking dunes, the Desert of Maine complex has a train to cart you around, plastic camels for photo-ops, and a nature trail through a pine forest that promised remarkable wildlife wonders such as "trees and birds."

In Freeport, I got to business trying on travel slacks at L.L. Bean. The town is one of the nation's most popular outlet shopping villages, with more than 150 stores. And it all started in 1917 when avid outdoorsman Leon Leonwood Bean opened his shop, now a 140,000-square-foot flagship. Frances had to drag me out of a dressing room to find lunch. Half a block down Main Street, we grabbed a table on the brick patio of the Lobster Cooker, a homespun version of a fast-food joint. It was my first lobster roll of the trip, and it was better than I remembered them to be. The soft, chewy bun and the mayonnaisey lobster were delicious.

Squire Tarbox Inn, a 1763 farmhouse turned B&B, was so secluded that to find it we had to stop twice to consult the map. Owner Roni De Pietro, a retired flight attendant, showed us around the building and up an outdoor staircase to our room. Rough wooden beams lined the ceiling, and there was a lovely view over gardens sloping to a meadow with a pond. After settling in, we returned downstairs to the inn's little living room to snack on goat cheese, crackers, olives, and red wine from the honor bar, where we noted what we drank for our bill.

Squire Tarbox is as well known for its meals as its rooms. Roni's Swiss husband, Mario--a veteran of top New York kitchens including The Four Seasons restaurant--prepared a dinner of chicken curry soup, grilled salmon, and potato-crusted haddock with a side of glazed carrots from the inn's organic garden.

Back in our room, I left the door open awhile to take in the quiet and the darkness. A fluffy cat sauntered in, hopped up onto the bed's duvet, and settled down with us for the night.

To say the town of Bath (pop. 9,266) is in the shipbuilding industry is a bit of an understatement; nearly half of the employees at Bath Iron Works are from the greater Bath area. And during the past 117 years, BIW has built more than 400 big boats, from tugs to missile destroyers. Down the road from BIW, the defunct Percy & Small Shipyard has been turned into the Maine Maritime Museum. I expected it to be dull, but was proven wrong by an intriguing mix of seafaring lore and shipbuilding secrets. An exhibit on lobstermen listed some common superstitions: They will not paint their boats blue, wear black, turn baskets or barrels upside down, or say the word "pig" while on board.

Maine's Mid-Coast looks somewhat like a stumpy hand with more than a dozen long, scraggly fingers. The fingers are peninsulas and islands, most of which are connected by bridges. From Bath, we drove down one peninsula and onto Bailey Island, a small fishing village. At the docks, Cook's Lobster House was a near-perfect lobster shack. I had baked lobster stuffed with Ritz crackers. The baking dried out the lobster meat, but copious amounts of melted butter went a long way to making up for it.

At Bowdoin College in Brunswick, we visited the Peary-MacMillan Arctic Museum, a collection of Arctic arcana. (Did you know caribou hair is hollow?) The place was named for two alumni explorers, the more famous of whom--Robert Edwin Peary--became the first man to reach the North Pole, in 1909.

We retraced our way south to Georgetown Island with one goal: to take a picture of me next to the sign for Reid State Park. After a lifetime of searching in vain for my name on a miniature license plate, this was something of a victory. The park also won me over with one of Maine's best beaches--a mile and a half of wide sand backed by marshy tide pools and a freshwater pond. Though summer temperatures around here average in the mid-70s, the water in the ocean never rises much past 60 degrees. Only the hardiest swimmers opt for the ocean, and it was too cold for us to contemplate either.

In Waldoboro, a neon sign welcomed us to Moody's Diner, a classic joint with two neat rows of white clapboard cabins on a hill behind it. We relaxed for a few moments on our little screened porch before hopping back in the car to backtrack down Rte. 1 for dinner in Damariscotta. The town, which curls around a harbor, has a white church steeple poking above the trees. At King Eider's Pub, we had cold pints of local microbrew Kennebec River Magic Hole IPA, along with fresh, meaty river oysters and a hunter's soup of beef, sausage, potatoes, and veggies in a spicy broth. It warmed us up nicely.

We fortified ourselves for the day with eggs, pancakes, and bacon at Moody's Diner before visiting Pemaquid Point. There's a real land's-end feel to the protruding finger of granite, which is eroded in the most gorgeous way. An 1827 lighthouse at the top of the outcropping is the same one pictured on the back of Maine's state quarters. Frances and I whiled away two hours scrambling over the rocks, peering at tiny crabs in tide pools. Just up the road we found a place that beat Cook's Lobster House, at least in terms of atmosphere. Shaw's Fish & Lobster Wharf is a one-room outfit with a sunny deck built out over a cove bobbing with boats. It was quiet accompaniment to yet another delicious lobster.

The oddest souvenir shop I've ever seen, the Maine State Prison Showroom near Rockland, is stocked with woodwork made by inmates from the state pen up the road in Warren. Prices are low: oak bookcases for $139, intricate ship models from $55. I'm still kicking myself for not buying a Maine State Prison birdhouse resembling a jail, with little bars on the windows. It was a bit disconcerting, however, to browse a store staffed by convicts (plus a guard).

Moving higher up the art scale, we stopped at the Farnsworth Art Museum in downtown Rockland to admire the work of 19th-century American painters, including Thomas Eakins and the Wyeth clan. Andrew Wyeth's father, N.C., started the family's habit of summering in Maine in the 1930s in nearby Port Clyde. After taking our sweet time at the museum, we parked down by the docks and boarded the ferry for the 75-minute ride to Vinalhaven Island. In the center of town, the Tidewater Motel is built right on top of a fast, narrow tidal channel. Our room opened onto a small deck over the water. From the window, we could look at the harbor, flecked with dozens of white boats.

Owner Phil Crossman lent us a couple of bikes, and we rode a few miles out of town to Booths Quarry, a popular swimming hole. It was sunny but chilly, and the water felt freezing. Some teenage girls were splashing around, so I tried--unsuccessfully--to convince Frances to jump in with me. What I failed to consider was that these girls had been tempered by Maine winters. The second I hit the water, I catapulted back out of it with a yelp and sprinted back along the surface to shore. Frances found this hilarious.

We biked back for dinner at the Harbor Gawker, an unpretentious restaurant looking out on a pond. The crab roll and clam chowder were simple and just right.

In a little shopping center next to the docks, a back deck leads to the Surfside, a restaurant popular with fishermen, who roll in for breakfast as early as 4 a.m. Well after that hour, I wolfed down two eggs with kielbasa, crispy home fries, and thick slices of bread made from cornmeal and molasses, and Frances had blueberry pancakes. All the while, owner Donna Webster and her staff teased the other clients--friends who had come in to discuss The Bold & the Beautiful, and skateboarders declaring the food "wicked good."

A ferry to the mainland dropped us back at our car, and we took a quick drive north to Camden. Giant old Victorians line the streets, a little river spills over a waterfall into the harbor, and fun shops fill brick buildings along Chestnut, Main, and Elm Streets. It all felt very Norman Rockwell.

Camden was the end of the road for us. But before shooting back down to Portland, we picked up some turkey sandwiches at the Camden Deli for one more activity, a mile-and-a-half climb to the top of Mount Battie, outside of town. Just below the mountaintop, we found a sunny boulder to sit on, and pulled out our picnic. We took turns reading to each other from "Renascence," the 1912 poem that launched the literary career of local high school student Edna St. Vincent Millay. The poem was evidently inspired by this very view of Camden, the perfect Maine town, overlooking the perfect island-dotted harbor.

The ideal time for this trip is in high summer, when temperatures reach the mid-70s, and everything's sure to be open. Driving these parts requires a lot of jogging up and down Route 1; the goal isn't to get from Point A to Point B, but to detour into all the inlets. The exits on Interstates 295 and 95 were renumbered in Maine in early 2004, so be sure to use 2005 guidebooks and maps. A few notes: 1) The Squire Tarbox Inn is easy to miss. From Bath on Route 1, Route 144 sneaks up after the Montsweag brook crossing. 2) The ferry to Vinalhaven leaves out of Rockland. 3) The fastest route back to Portland from Camden is inland, via Route 90 to Route 17 to Augusta, then I-95 to I-295 south.