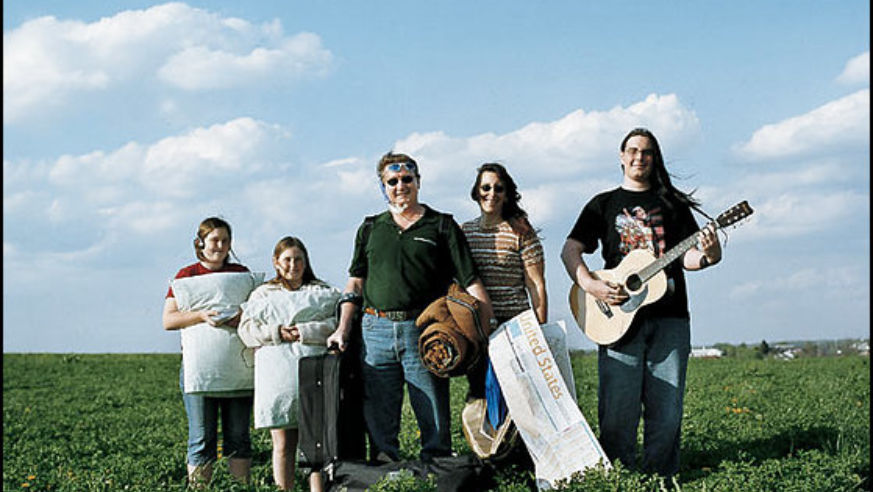 Ryan Donnell
The Reazers near their home in Cleona, Pa.

At first glance, the Reazers seem like an average family. Ed and Laura have three kids (Ben, 16; Emily, 13; and Elizabeth, 10) and live in Cleona, a small town in rural Pennsylvania. They're big fans of the ocean, and many of their top vacation memories involve water--snorkeling in Kauai, whale watching in Maine, island-hopping in the Florida Keys. As we quickly learned while planning the family's trip to the West Coast, however, the Reazers are far from conventional, and proud of it. "We're an odd, motley bunch," Laura told us. "I've never seen people like us in your magazine, or any magazine really."

Ever since Laura realized it would take Ben an hour on the bus to get to kindergarten, all the Reazer children have been homeschooled. Laura supplements at-home learning with trips to museums and historic sites. The children also do volunteer work, sending gift bags to kids with cancer. The girls both love animals; Emily even mucks stalls at a horse farm in exchange for riding lessons. And then there's Ben, who provided the excuse for the trip. Ben has long hair, dresses all in black, and is really into music--The Doors, Johnny Cash, Nirvana, Pink Floyd, you name it. He plays his guitar at every opportunity, even sitting in regularly with a group of middle-aged guys strumming bluegrass. Ben's interested in attending the University of California at Berkeley next year.

With three weeks free in September, the Reazers will fly into Seattle and drive down the coast, visiting the Cal campus along the way, before catching a flight home from San Diego. (One of the advantages of homeschooling is that families don't have to take vacations in the summer, convenient considering the Reazers hate crowds.) They asked us to help plan the trip, taking into account they didn't want theme parks or other tourist standards. "We'd like to try alternative accommodations: yurts, hostels, and so forth," Laura wrote to us. "They sound so cool, and we are trying to keep costs low."

One interest shared by the whole family is food. "We all love eating and trying new things, the weirder the better," said Laura. Seattle's Pike Place Market, while not exactly undiscovered, is where out-of-towners and neighborhood regulars buy fresh fish, flowers, and fruit. Rainier cherries, a sweet local variety, make a great walking snack.

For lodging, we recommended the Ace Hotel, just north of downtown. Most hotels charge extra for a hip look, but the spare, elegant rooms at the Ace are affordable for Seattle (under $200 a night for two rooms).

"My son wants to see Jimi Hendrix's grave," said Laura. Hendrix, born and raised in Seattle, is buried southeast of the city in Renton, where music lovers leave flowers or personal notes (jimihendrixmemorial.com). Seattle's Experience Music Project, a huge museum founded by Microsoft guru (and Hendrix fan) Paul Allen, is probably worth a visit. Inside are costumes and instruments used by rock legends, and in September they're showing concert footage of Hendrix every hour.

Self-described "beach freaks," the Reazers' next stop is three hours' south of Seattle at Cape Disappointment State Park. The waters are always rough and cold, but the dramatic cliffs make for wonderful scenery. Emily gets excited about puppies, much less wild animals, so she should enjoy spotting seals and whales. The park rents cabins and yurts for $40 a night.

Another three hours in the car brings the family to Portland, Ore., a town we obviously like (see p.88). One place not mentioned in that story is Edgefield. Just outside the city, it's a 200-year-old farm that's been converted into a movie theater, restaurant, golf course, and hotel.

Elizabeth and Emily are looking forward to collecting sand dollars, the flat shells of the spiny sea creatures called echinoids. They'll be able to find them, as well as seals and sea otters, at Cape Lookout State Park, due west of Portland.

From there, the Reazers have a choice: Stick to the coast all the way to California or head inland for some of Oregon's mountains, lakes, and trees. We recommended heading east from Florence to Eugene, a college town in tune with Berkeley's hippie past, continuing into the pristine Cascade mountains. Near the state border is an unusual overnight experience: the Out'N'About Treehouse Treesort rents cabins built into the trees.

In California, the Reazers' first stop is in Crescent City at the Northcoast Marine Mammal Center, where they'll learn how injured seals, dolphins, and whales are nurtured back to health. Afterward, Ed Reazer's one request--seeing some giant California redwoods--will be addressed. South of Crescent City are the 300-foot-tall trees of Redwood National Park, where there's a hostel with ocean views.

Down the coast is Arcata, a town whose counterculture roots are still very much apparent. We suggested the Saturday-morning farmers market, if the timing works. The tie-dyed locals make for great people watching, and there's plenty of organic produce to sample. The Reazers should keep an eye out for farmers selling peppers in every imaginable color, shape, and degree of spiciness. Also worth a look is the historic Samoa Cookhouse, an all-you-can-eat restaurant that used to feed loggers in the area.

For lodging in San Francisco, we suggested trying a lowball bid at Priceline (using biddingfortravel.com as a guide) or booking a couple of private rooms at Hostelling International at Fisherman's Wharf. The hostel is in a national park, offers views of the Golden Gate Bridge, and includes free breakfast. Highlights in the city include driving up and down the crazy hills, mingling with the punks in the Haight-Ashbury district, and heading to the Mission District to chow on burritos at Taquería Cancún or chicken shawerma from Truly Mediterranean.

To get Ben in the right mood before his campus visit, we told him to tune into KALX 90.7, the student station that plays new bands, forgotten gems, and genuine oddities. Cal gives tours of the campus seven days a week, but it might be more important to scope out the nearby coffeehouses, shops, and hangouts on Telegraph Avenue. We're sure Ben could spend several hours at Amoeba Music, which overflows with vinyl LPs.

Next we recommended a leisurely drive down the coast, with great photo ops at Big Sur's dramatic cliffs, and perhaps a night or two in the Santa Barbara area at Rancho Oso, which rents covered wagons with army cots. Eventually the Reazers will wind up in Los Angeles to hit Venice Beach, with its circus of skateboarders, jugglers on roller skates, break-dancers, and weight lifters. They should grab a sausage sandwich at Jody Maroni's, home of the "haut dog," and watch the parade.

Before flying home from San Diego, the Reazers should take a final opportunity to commune with the Pacific and go snorkeling at La Jolla Cove, where they'll find fish in every color of the rainbow, along with a seal or two. There's too much to see in a single vacation to the West Coast, and there's no reason the Reazers should try to do it all. If Ben winds up becoming a Cal Golden Bear, the family can always tack on more sightseeing trips when they visit him.

In our March issue, we coached Andrea and Richard Farrow on a vacation in Italy. "My husband spoiled me, and we grew much closer on this trip," said Andrea. "One night, wandering Rome's streets, we turned a corner to see the Pantheon all lit up. It was just beautiful. Richard's favorite was Pompeii. He said he could almost see the people living there, going through their daily routines. Cinque Terre was awesome. We stayed an extra night because we couldn't get enough of the views and the people."

Mina Harker, who claims to have been banished to the U.S. by Count Dracula himself, has offered to give the Reazers a free private version of her San Francisco Vampire Tour. It's a unique tour for a unique family.