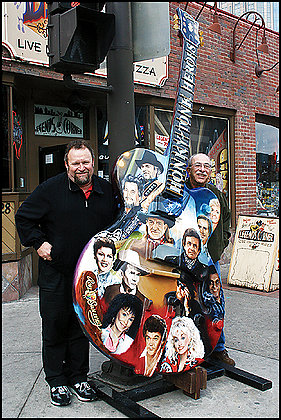 Emily Nathan
Two Sacramento, Calif., couples are headed for the country music capital, and they're looking for hot tunes and good eats.

Who's Traveling
Dale and Vicky Blackwell and Chuck and Joyce Maltese, of Sacramento, Calif. The Blackwells (wearing black hats in the photo) met 25 years ago when Vicky went to work for the equipment and party-rental company that Dale and his family own. "I always say he married me because I'm cheap labor," jokes Vicky. They still work together every day, albeit in separate parts of the business. The Blackwells' friends, Joyce and Chuck, have decided to join them on the trip to Nashville.

Where They're Going
"Dale and I are big fans of country music," says Vicky. "We're going to a trade show in Atlanta, so I figure we can extend our trip and drive up to Nashville." Along the way, the couple plans to stop at two Civil War battlefields: Lookout Mountain, outside Chattanooga, Tenn., and Stones River, near Murfreesboro, Tenn. "My great-great-grandfather is buried at Stones River," Dale explains. Chuck and Joyce will meet the Blackwells in Nashville. "We've traveled the world together and like to do a lot of the same things," says Vicky. "On our last trip, to Albuquerque, we rated all the different salsas and tequilas we tried. It was great fun!" Joyce adds that this will be the first visit to Nashville for her and Chuck, too. "We'll need to do the highlights of the touristy stuff, but then we want to go where the locals go."

How Can We Help?
History lessons: The couples agree that they'd like to experience a little history while they're in town. Dale already has The Hermitage, President Andrew Jackson's home, on his must-see list. "Are there other mansions or plantations worth visiting?" Joyce wonders.

Hitting the right note: "We like country, jazz, and blues--in that order," says Vicky. "Where should we go to hear live music?"

Good eats: Chuck asks for the scoop on the best restaurants. "I'm not sure what the cuisine is down there, other than good old Southern food. We love that. Can you suggest some local hangouts?"

Beyond city limits: Though they plan to spend most of their time in Nashville proper, Vicky points out that they'll have a rental car. "What day trips would you recommend?"

A little splurge: "We'd love a nice dinner on our final night in town," says Joyce. "Know any places that'll knock the guys' socks off?"

Downtown
When people think of Nashville, they think country. Music Row--the area southwest of downtown where labels like Sony BMG and Universal have offices--is where today's stars sign their multimillion-dollar contracts. But any music-history tour should start downtown with the thousands of photos, costumes, and instruments on display at the Country Music Hall of Fame (222 Fifth Ave. S., 615/416-2001, countrymusichalloffame.com, $18). Pay an additional $13 for the 30-minute bus tour to RCA Studio B, where everyone from Elvis to the Everly Brothers recorded in the '60s and '70s. After the tour ends back at the Hall of Fame, zip south to Arnold's Country Kitchen for a "meat and three" lunch, which includes one main, like fried chicken or ribs, and three sides (605 Eighth Ave. S., 615/256-4455, from $7, open weekdays till 2:45 p.m.).

Luxury apartments and slick restaurants are popping up in the trendy Gulch area, the name given to the "valley" that the railroad system cuts through town. At Watermark, seasonal entrées include osso buco and rack of lamb, and tables have views of the skyline (507 12th Ave. S., 615/254-2000, entrées from $21). On Tuesday nights, there's a chance that some incarnation of the MuzikMafia, a posse led by country's biggest showmen, Big Kenny and John Rich, will be putting on a show nearby at 12th & Porter (114 12th Ave. N., 615/254-7250, cover from $5).

12South
South of the Gulch is the up-and-coming 12South district, which is full of fun boutiques like Bloke, a men's clothing shop housed in an old body shop (2900 12th Ave. S., 615/292-5653). Among the vintage western wear at Katy K's Ranch Dressing, you might find great deals on original rhinestone suits or jackets by Manuel, Nashville's most famous tailor (2407 12th Ave. S., 615/297-4242). A protégé of the infamous West Coast "rodeo tailor" Nudie Cohn, Manuel is credited with making Elvis's flashy jumpsuits and with being the first to put Johnny Cash in black. At Manuel's own atelier downtown, custom-made shirts start at about $750 (1922 Broadway, 615/321-5444).

Belle Meade
Owned by five generations of the Harding-Jackson family through most of the 19th century, the Belle Meade Plantation, six miles west of downtown, was once one of the country's leading thoroughbred breeding and training grounds (5025 Harding Rd., 615/356-0501, bellemeadeplantation.com, $11). The bloodlines of champions like Secretariat, Seabiscuit, and Barbaro can be traced to Belle Meade horses. A tour of the grounds includes the beautiful Greek Revival mansion, the carriage house and stables, and the gardens. An on-site restaurant, Martha's at the Plantation, has great chicken-salad sandwiches (615/353-2828, from $9). Al and Tipper Gore live nearby in a 10,000-square- foot home on Lynnwood Boulevard.

East Nashville
Across the Cumberland River from downtown, East Nashville is Belle Meade's polar opposite in both social stature and attitude. Nashville's version of New York's East Village, the neighborhood has been gentrifying slowly as artists take over the Victorian houses and arts-and-crafts bungalows. It's also home to one of Nashville's best restaurants, Margot Cafe (1017 Woodland St., 615/227-4668, entrées from $16). Chef and co-owner Margot McCormack changes the short, Mediterranean-inspired menu daily.

Thanks to the cheap rents, there are probably more singer/songwriters living, recording, and playing in East Nashville than in any other part of town. The Family Wash is an excellent place to see local acts on a small stage (2038 Greenwood Ave., 615/226-6070, familywash.com, no cover).

Franklin
The town of Franklin is about half an hour south of Nashville on I-65 and worth a day trip. The drive in from the interstate is lovely, the town's main streets are lined with graceful homes, and the 16-block historic district downtown is a shopper's paradise; historicfranklin.com has a list of stores. Lillie Belle's has mid-afternoon tea with scones and finger sandwiches (132 Third Ave. S., 615/790-2300, $25, reservations required). One of the town's biggest draws is the Factory at Franklin, a funky mall housed in what was once a stove manufacturing plant (230 Franklin Rd., 615/791-1777, factoryatfranklin.com). Country Music Television's concert series Crossroads occasionally films there. On the way back to Nashville, detour west to Puckett's Grocery in the village of Leiper's Fork. In an old country store, Puckett's is famous for its burgers (4142 Old Hillsboro Rd., 615/794-1308, $3.50).

Bringing the Sound Home
For a sampling of the talent that lies across the river from downtown, pick up a copy of The Other Side: Music From East Nashville (redbeetrecords.com, $15). The double CD includes songs from 30 emerging musicians like folk troubadour Todd Snider. His latest album, The Devil You Know, was named one of Rolling Stone's top picks of 2006.

How can we help you?
If you'd like to be coached by us, send an e-mail to Letters@BudgetTravelOnline.com .

Getting kids to smile in the same tired old poses can be a chore--and will probably result in boring, forgettable photos. To spruce up the family album, try some goofy trick shots. We got these ideas from a book called Tricky Pix, which unfortunately is going out of print soon (klutz.com, $20). Gigantic sneaker: Find a simple background that has a uniform look and color scheme, as well as a slight slope. A grassy hill is perfect. Place the sneaker on the ground--the photographer will snap shots at very close range. Have a child pose at the spot up the hill where it appears she's inside the sneaker. The long stretch: This one works best with two children who are about the same size. Each hides half of her body behind a tree, giving the appearance of an extra-long torso. Headless little sister: The key is to make sure that the head and hair of the child facing away from the camera are completely out of view. The photographer should shoot from about the same height as the wall or ledge that is shielding the second child's body from view. Flexible sunbather: One child lies on his belly, while another lies on top of him with legs propped as in photo above. The photographer gets low to keep the illusion that there's one very flexible person on the beach. Brother bowling ball: This is the same basic idea as the &quot;headless little sister&quot; shot: Be sure that no body part of the person being the &quot;head&quot; is visible. Make a ghoulish face or just play it casual. Mom in hand: Like the &quot;gigantic sneaker&quot; shot, this one requires a plain, slightly sloping background. The palm of the person in front should be flat or angled slightly away from the camera. 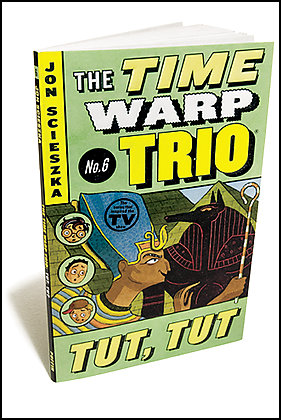 Each one is fascinating, but just try booking a flight there. To fire your children's imagination about the real world--and bring sensational travel destinations vividly to life--check out these rollicking tales aimed squarely at the pre-teen crowd. The Time Warp Trio Brooklyn buddies Joe, Fred, and Sam are unwillingly zapped around time from ancient Egypt to Mayan Mexico to medieval Scotland to Renaissance Italy, finding themselves in hilarious adventures that appeal to kids and adults alike. Jon Scieszka's books have inspired a Discovery Kids Channel TV show, as well as a cool website, timewarptrio.com. Magic Tree House In Mary Pope Osborne's hugely popular series--37 books and counting--Jack and Annie travel around the world (Australia, Africa, Hawaii, the Amazon) and sometimes through time (to the original Olympics in Greece, San Francisco's 1906 earthquake). There are also Research Guides companion books for sale, with info on cultures, places, and eras. The Bridges In . . .Sisters Robin and Jo Bridge, who are serially left on their own in London, Edinburgh, and Paris, solve mysteries by hunting down clues scattered around each metropolis. Author Michele Sobel Spirn includes maps, guides to local slang, blurbs on attractions and fun neighborhoods, and other information to help families have their own adventures in the cities.

Kids of the right age will be thrilled at the chance to take a 25-minute ride aboard Thomas the Tank Engine, the main character in the enormously popular books, toys, and TV series. From early spring to early winter, Day Out With Thomas excursions rotate to different locations throughout North America--in Strasburg, Pa., Florida, upstate New York, and beyond. 866/468-7630, thomasandfriends.com, $16 adults and kids 2 and up.