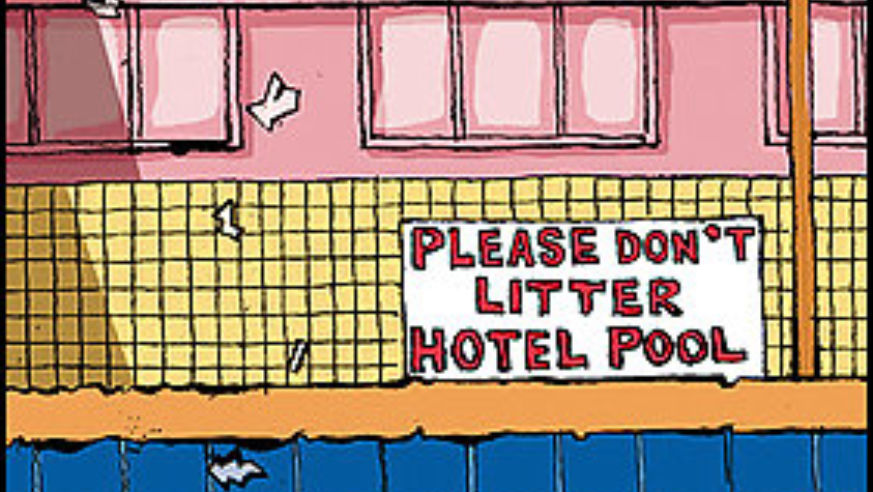 There are so many creative ways to trash a perfectly good hotel room--it's come naturally to rockers and divas like these for decades.

The first instance of modern hotel room trashing can probably be traced to F. Scott and Zelda Fitzgerald, who reportedly fled their eucalyptus-scented bungalow at the now-demolished Ambassador Hotel of L.A.'s Wilshire Boulevard after it caught fire. The high-living Jazz Age icons were concerned about their massive bill, which was quickly coming due. These 10 outrageous incidents help explain why we've had to leave a credit card at the front desk ever since.

I said spaghetti pomodoro!
The risk of selecting pasta from a room service menu is that it may arrive overheated, much like the frequently boiling blood of Amy Winehouse. In one of a seemingly endless series of mini meltdowns, the beehive-coiffed British pop singer, 24, hurled a plate of spaghetti Bolognese at the wall of her Munich, Germany, hotel room. Two months earlier, Winehouse tallied up nearly $18,000 worth of damage to her room at London's posh Sanderson hotel after a fight with her scrawny hubby. A hotel staffer told the British tab Sunday Mirror, which has gleefully chronicled Winehouse's year in celeb hell: "I've certainly never seen anything like it before. They had to get an outside firm to clean blood off the walls, and then there was a hefty paint job." Sanderson, 50 Berners St., London, England, 011-44/20-7300-1400, sandersonlondon.com, rooms from£215 ($435).

Won't get fooled again
On August 23, 1967, while touring with fellow British Invasion band Herman's Hermits, The Who's Keith Moon observed his 21st birthday by raising a celebratory toast—and a dozen more—to the spirit of uncontainable destruction that marked both his drumming and his lifestyle. He hurled a five-tier cake into the crowd partying in his hotel room, promptly ruining the carpet and setting off a food fight. Someone even emptied all the fire extinguishers on his floor (in a post-trashing interview, Moon claimed the damages totaled $24,000). When a police officer showed up, Moon, stripped down to his underwear, jumped into a nearby Lincoln Continental, drove it through a fence, and abandoned it at the bottom of the Flint Holiday Inn's pool. In a final flourish, he slipped on a piece of marzipan and knocked out his front teeth. The officer escorted Moon to the dentist before throwing him in jail for a few hours. Forty years on, this incident remains the granddaddy of all rock and roll lodging smashups. The Who were subsequently banned from all Holiday Inns for life. Sadly for Moon, that would amount to only about 11 years. Days Inn Flint (formerly Flint Holiday Inn), 2207 West Bristol Rd., Flint, Mich., 810/239-4681, daysinn.com, rooms from $58.

The suspect is two feet tall and well armed
Guests at Manhattan's posh Mark Hotel were awakened at 5:30 a.m. on September 13, 1994, by the sounds of shattering glass, snapping wood, and loud domestic squabbling. When police entered the $1,200-per-night Presidential Suite, they found actor Johnny Depp and his then-girlfriend, supermodel Kate Moss, sitting amidst a pile of debris—but they did not find the armadillo Depp reportedly blamed the vandalism on. Depp was taken to the city's 19th Precinct station house, booked on felony criminal mischief charges, and billed $9,767 for the damages. Coincidentally, one of the put-out guests at the hotel that evening was Roger Daltrey, singer for alpha hotel destroyers The Who. "On a scale of 1 to 10, I give him a 1," Daltrey told People magazine. "It took him so bloody long. The Who could've done the job in one minute flat." Years later, Depp, then split from Moss, claimed the hotel's owner thanked him for all the free publicity. The Mark Hotel, 25 E. 77th St., New York, N.Y., 212/772-1600, themarkhotel.com. Closed for renovations through summer 2008.

Next eBay search: "syringes"
If Lindsay Lohan stuck with rehab long enough, she might make one of those 12-step meetings where they recommend avoiding people, places, and things that might trigger a relapse. Places like luxury beachside hotels with well-stocked minibars. They might also warn against dating someone met inside rehab. Someone like Riley Giles, late of Utah's exclusive Cirque Lodge facility, who was with LiLo in early December 2007 when she laid waste to Room 645 at Shutters on the Beach. According to Star, Lohan and her ex-boyfriend spent three days wreaking havoc. An unnamed source told the tabloid, "It was a pigpen. There was filth everywhere and the room stank of cigarette smoke.... There was also a bloody syringe that someone left lying on the bedside table on a room-service tray. Hotel security photographed it before calling someone to remove it, because it was considered hazardous waste." That would also describe what's become of the once-promising actress's career. Shutters reportedly had to bring in an outside cleaning crew to repair the damages to the room. Shutters on the Beach, 1 Pico Blvd., Santa Monica, Calif., 310/458-0030, shuttersonthebeach.com, from $485.

Stone crazy
Have you ever noticed that your hotel room's television set has been bolted into the armoire? This story may explain why. At the L.A. stop of the Rolling Stones' 1972 North American tour, guitarist Keith Richards—and musician Bobby Keyes—grabbed the TV set from Room 1015 at the Continental Hyatt House, carried it out on the balcony 10 stories above the parking lot, and pitched it over the side. Richards remains an edgy rock icon in part because of his keen sense of self-mythology. He waited to make sure documentarian Robert Frank's camera was rolling before condemning the TV to its cruel fate. "O.K., you can tell us when," Richards croaked, then let the TV fly into legend. The footage (available in Frank's documentary and on YouTube) inspired dozens of copycats looking for a quick conduit to achieving Keith-hood. Hyatt West Hollywood (formerly the Continental Hyatt House), 8401 Sunset Blvd., West Hollywood, Calif., 323/656-1234, westhollywood.hyatt.com, rooms from $240.

What happens in Bangkok...
In 1989, as the decade that made him a superstar drew to a close, Billy Idol found himself in Bangkok, Thailand. His plan for prolonging the party just a little more (more, more) was hatched in the Oriental hotel, but Idol allegedly soaked the carpets with some kind of fluid, and was quickly asked to vacate. From there, as with most urban myths based in Thailand, details get fuzzy. If rumor is to be believed, he embarked on a three-week drug-fueled orgy with an outrageous tab in the hundreds of thousands of dollars. It, too, ended with flustered staff. Idol is said to have refused to leave the penthouse of another hotel, forcing local military officials to tranquilize him and carry him out on a stretcher. The room was then occupied by a visiting dignitary with a long-standing reservation—and no demonic sneer. The Oriental, 48 Oriental Ave., Bangkok, Thailand, 011-66/2-659-9000, mandarinoriental.com/bangkok, rooms from $349.

The proto-Paris Hilton
Edie Sedgwick was the It Girl of the Swinging '60s art and fashion set, and a muse to both Andy Warhol and Bob Dylan. Yet the hard-partying socialite was also reportedly afraid of the dark. Her habit of falling asleep surrounded by lit candles resulted in an apartment fire in October 1966. After moving into Manhattan's bohemian enclave, Hotel Chelsea, she ignored both recent history and a cryptic warning by fellow denizen Leonard Cohen. (The songwriter insisted Sedgwick's candle arrangements were "casting a bad spell.") Soon another rug was on fire, and shortly thereafter, the entire room was too. Luckily none of the hotel's guests were seriously injured, but Sedgwick's cat perished in the blaze. Its name? Smoke. Hotel Chelsea, 222 W. 23rd. St., New York, N.Y., 212/243-3700, hotelchelsea.com, rooms from $209.

While you were out
On March 24, 1997, French thespian Juliette Binoche accepted a Best Supporting Actress statuette for The English Patient as part of the 69th Annual Academy Awards ceremony at the Shrine Auditorium. Simultaneously, at her hotel just a short drive away, bass player Mike Dirnt of Green Day allegedly accepted the notion of defecating on her balcony as part of, well, nobody knows for sure. In fact, Dirnt strongly denies that this even happened, and considers the (fecal) matter closed. Yet he remains, at least in the minds of scatological crime enthusiasts, forever dangled over that balcony. The band was indeed staying in the rock-and-movie-star haunt, the Sunset Marquis, while recording their Nimrod album. One can't help but wonder about Binoche's first thought upon returning home from the after parties and spotting the now-fabled dookie. Sunset Marquis Hotel and Villas, 1200 N. Alta Loma Rd., West Hollywood, Calif., 310/657-1333, sunsetmarquishotel.com, rooms from $450.

43 is the new 23
In London to test out new material at a small Shepherd's Bush gig, recidivist hotel trasher Courtney Love celebrated her 43rd birthday with an impromptu room party at the Covent Garden Hotel on July 9, 2007. While reflecting among revelers and well-wishers like British TV star Noel Fielding (of The Mighty Boosh), the voice in her head might have gently suggested "Gee, I'm older now, more mature, wiser...do I still have it in me to completely freakin' destroy this perfectly charming rented space?" The cleaning staff discovered the answer to that question the following morning. "The room was left in a right state like a wild animal had been let loose in there," an unnamed witness later told the Daily Mirror. There were reportedly cigarette burns in the carpet, the sofa, and the bed—not just the bedding, but the actual four-poster bed. Love's rep played down the extent of the damage by claiming that one of the guests was "leaning on a table." Hotel management insisted that "what our guests do in here is between them and us," leaving open a window of possibility for her 44th. Covent Garden Hotel, 10 Monmouth St., London, England, 011-44/20-7806-1000, firmdale.com, rooms from£250 ($513).

Do not furtherdisturb
The case of billionaire maverick Howard Hughes proves that with enough money, ingenuity, and henchmen, one can stretch the spontaneous room trashing into a prolonged exercise in grand-scale dementia. Hughes checked into a ninth-floor room at Las Vegas's Desert Inn on Thanksgiving 1966, and, as was his habit, rented out two floors to ensure privacy. When it came time to check out, weeks later, Hughes instead arranged to purchase the entire hotel (one of five he would come to own in Vegas). He closed outside access to the ninth floor and added a 24-hour security checkpoint at the elevator. He reportedly spent much of the late '60s watching the Rock Hudson film Ice Station Zebra on a loop, having installed a cinema-quality sound system that caused the walls to shake. As his obsessive-compulsive disorder manifested itself as severe germophobia, Hughes supposedly stopped dressing, bathing, and clipping his nails; stored his own urine in jars; and wore tissue boxes for shoes. Films such as The Aviator and The Hoax explore the sights and sounds of this dark period. None have addressed the smell, which is best left to the imagination. Wynn Las Vegas (formerly Desert Inn), 3131 Las Vegas Blvd., South Las Vegas, Nev., 702/770-7100, wynnlasvegas.com, from $199.