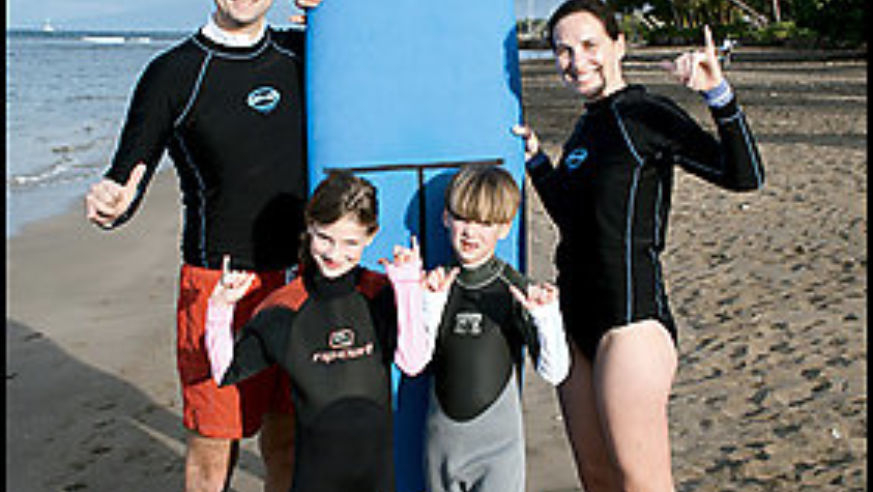 "We Need Another Week!"
Everyone in the Koontz family agrees: They need to go back to Hawaii. Until then, though, they have some fun mementos: a hula skirt and a lei-making kit for Madison, and a tiki carving from the luau for Brennan.

Before sunset
"This was right before dinner at Mama's Fish House," says Brandi. "We got there just as the sun was going down, so we took this shot. The menu there was so cool—for every fish, it told you the name of the fisherman who caught it!"

Hang loose
No one in the family had ever surfed before, but they all got into it right away, thanks to lessons with Goofy Foot Surf School.

Rock star
The kids were a little nervous before they got to Haleakala. "They knew it was a volcano," says Brandi, "and in a child's mind, all volcanoes spew hot lava." But when they got to the top, both kids were totally captivated. At one point, Brennan even said, "Dad, this is perfect."

Tall tail
On the whale watch, Madison announced to everyone that there was a whale under the boat. "No one believed me, but then he popped up!" she says.

Sweet!
Madison was a huge fan of all the umbrella drinks—virgin, of course! She ordered a strawberry daiquiri at Hula Grill, right after the family went snorkeling on Kaanapali Beach.

On board
The kids took to surfing immediately. "Once, my brother fell off his board, but I just kept going and going!" Madison says. Brennan had his own proud moment when they surfed a few days later. "He caught the very first wave he went for, and a bunch of local surfers started clapping for him," Brandi says. "He was thrilled!"