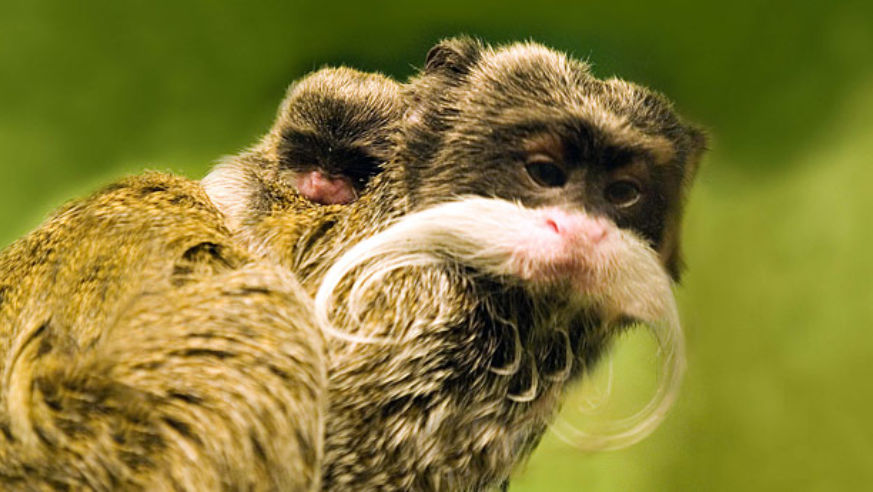 Courtesy Paignton Zoo
The emperor tamarin's wildly eccentric moustache (strikingly similar to Mr. Monopoly's) is something of a mystery

Tired of seeing run-of-the-mill lions, tigers, and bears? Then say "oh my!" to these oddball creatures at zoos and sanctuaries worldwide&#151;from a giant Chinese salamander to a little lemur called the aye-aye.

Aye-aye
Weirdness factor: Where to start? The aye-aye is a kind of lemur, with large round ears that rotate independently. How does it eat? There are no woodpeckers in Madagascar, but the aye-aye has evolved to feed like one, using its long middle finger to scoop out grubs in tree bark.
See it in: Madagascar (and the Bristol Zoo Gardens).
See the photo

Proboscis Monkey
Weirdness factor: The male proboscis monkey has a pendulous nose that is thought to amplify his calls to females (and his warnings to big-nosed rivals). The most dominant male usually has the biggest nose and can collect a harem of five to eight females.
See it in: Borneo (and the Singapore Zoo).
See the photo

Naked Mole Rat
Weirdness factor: Almost totally blind, the naked mole rat is one of only two species of mammals that live in colonies with a caste system, like termites or ants. There's one queen and sometimes hundreds of workers and soldiers—which are expected to sacrifice themselves in battle should a snake appear (and not lose its appetite).
See it in: Ethiopia, Kenya, and Somalia (and Zoo Atlanta and the National Zoo).
See the photo

Philippine Tarsier
Weirdness factor: The tiny tarsier's eyes are about twice the size of a human's and have no peripheral vision. Tarsiers pounce on prey with their vulnerable eyes shut tight, for protection (because who wants a cricket stuck in their eye?).
See it in: The southern Philippine islands of Bohol, Samar, Leyte, and Mindanao (and the Philippine Tarsier and Wildlife Sanctuary in Bohol).
See the photo

Emperor Tamarin
Weirdness factor: Named for the last emperor of Germany, this tamarin's wildly eccentric moustache (strikingly similar to Mr. Monopoly's) is something of a mystery. Experts think it might be a unique identifier, as a fingerprint is for humans.
See it in: Bolivia, Brazil, and Peru (and the Paignton Zoo, in Devon, England).
See the photo

Matamata Turtle
Weirdness factor: The knobby, gnarled matamata uses its huge mouth to suck in unsuspecting food sources as they pass by. In Spanish, matamata means "it kills, it kills."
See it in: The Amazon River in Brazil, and in parts of Trinidad and Guyana (and the Honolulu Zoo and San Diego Zoo).
See the photo

Gelada Baboon
Weirdness factor: This primate's fangy yawn is actually a display of aggression to show off its canine teeth. The red patch of skin on the female's chest gets brighter as her hormone levels increase. As a natural design feature, it's probably a little too much information.
See it in: Eritrea and Ethiopia (and the Bronx Zoo).
See the photo

Chinese Giant Salamander
Weirdness factor: The largest salamanders in the world, these unattractive guys can grow to three feet long. But that doesn't stop them from being eaten: Their meat is considered a delicacy in parts of China.
See it in: The streams and lakes of central China and Taiwan (and the Steinhart Aquarium in San Francisco).
See the photo

Echidna
Weirdness factor: The echidna is an evolutionary mashup—it has a pouch for its young like a kangaroo, spines like a porcupine, and a sticky tongue like an anteater. Oh, and it lays eggs like a chicken.
See it in: Tasmania, Australia, and New Guinea (and the Cleveland Metroparks Zoo, which has a short-beaked echidna).
See the photo

Victoria Crowned Pigeon
Weirdness factor: These blue, turkey-size pigeons with outrageous plumage live mostly on the ground, mating for life and building sturdy nests for their young.
See it in: New Guinea (and the Philadelphia Zoo).
See the photo

White-faced Saki Monkey
Weirdness factor: Often called flying monkeys, white-faced sakis rarely let their feet hit the ground. They prefer to stay in the mid-level trees of the rain forest, where they can jump up to 30 feet in a single bound and can run upright along narrow branches.
See it in: The rain forests of northeastern Brazil, French Guiana, Guyana, Suriname, and Venezuela (and the Elmwood Park Zoo in Norristown, Pa.).
See the photo

Tree Pangolin
Weirdness factor: This insect eater's scales feel a little like human fingernails. But don't touch: Like the common skunk, the pangolin has an unpleasant-smelling spray for those who get too close.
See it in: Central Africa's rain forests (and the San Diego Zoo—which displays the tree pangolin infrequently, and without a lot of advance notice).
See the photo

Pygmy Marmoset
Weirdness factor: Pygmy marmosets are the smallest monkeys in the world. They communicate though whistles and twitters, but when hostile they emit a frightening cry that's audible to peers but inaudible to humans.
See it in: Brazil, Colombia, Ecuador, and Peru (and the Houston Zoo and the Philadelphia Zoo).
See the photo

Leafy Sea Dragon
Weirdness factor: Male leafy sea dragons carry and give birth to the offspring. Instead of swimming upright, like sea horses, the leafy sea dragon swims in a horizontal position. It uses its tube-shaped mouth as a straw to suck up food.
See it in: The waters of the southeastern Indian Ocean, near southern and western Australia (and the Georgia Aquarium in Atlanta).
See the photo