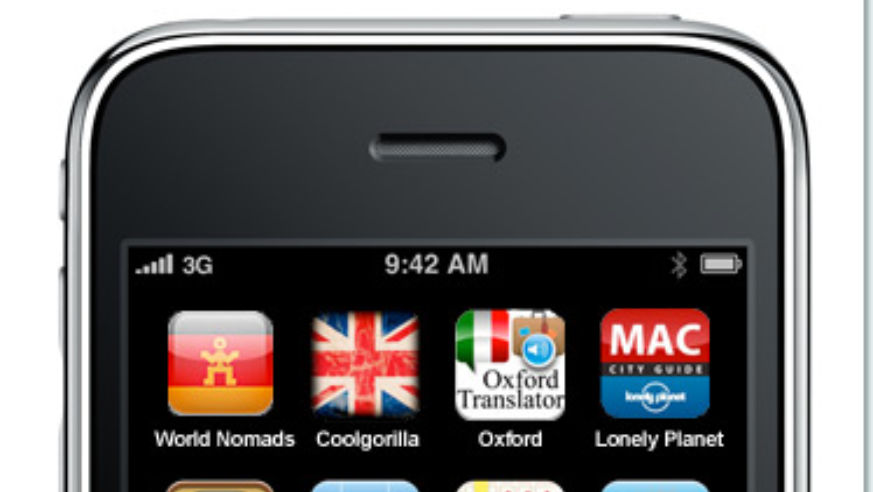 Our favorite apps work with or without Internet access. Because, chances are, Wi-Fi hotspots aren't the only places you'll need help with the local lingo.

Usability: The World Nomads apps present lists, divided into categories, of a few dozen basic travel phrases. After tapping through the categories, such as "places to stay" and "directions & transport," you can select an appropriate phrase and hear an audio clip of a native speaker pronouncing it—a high-end feature we're surprised to find in a free app.

Frustrations: Dining phrases are missing—a big drawback. There are also inconsistencies. The Thai app tells you how to say "yes," but not "no." (For the record, it's mai.) Sometimes, an app suffers the opposite problem and presents the forest rather than the tree you need. For example, the Arabic app suggests five ways to greet people, but none of them is the handy salaam aleikum, which is all you need to know.

Overall: Most of what a tourist needs to understand is covered, including key words (such as "please" and "thank you"), numbers up to 10, and a few phrases useful in transportation ("Where is your ticket?"); lodging ("Too expensive!"); and safety ("Stop, thief!" and everybody's favorite "Those drugs aren't mine!"). There's also a Language Lesson feature in which all of the phrases are strung together in a short audio skit of a "typical tourist situation," complete with background sound effects.

Usability: The interface is similar to World Nomads'—useful travel phases, divided by category, organized in a simple, straightforward fashion.

Frustrations: Some translations seem less than necessary (guess what the Italian words pizza, lasagne, and tiramisu mean in English?). More languages would be nice. Also, Coolgorilla is a British company, which means you need to translate things into British English in your head first (chips are French fries). The apps are a bit buggy and crash on occasion—not a huge concern, but annoying.

Overall: While they function similarly to the free World Nomads apps, the Coolgorilla apps come with 10 times the number of phrases per language, making them a fantastic investment for just a buck. The app for each language features more than 500 phrases in 40 categories (accommodations, food and drink, activities, shopping, etc.), all professionally translated and spoken aloud. The speakers get amusingly breathy and excited when translating such phrases as "Kiss me" and "I want you." Fittingly, the phrases come after "Would you like a drink?" and "What's your sign?"

Usability:Open the app and choose from categories, such as "conversation," "food," and "hotel/lodging." Unlike the other apps we tested, Oxford's novel interface—which suggests various ways to start conversations in the chosen category—subtly and organically teaches you how to put together phrases and sentences on your own.

Frustrations: We look forward to the release of more languages, as five is more of a sampler size. The audio for each word was obviously recorded separately and then stitched together into sentences, so there are awkward pauses between words and the inflection is sometimes off.

Overall:The Oxford apps cover all of the usual travel categories, but in far greater detail than the competition. The apps are truly interactive learning tools that teach the user how to form sentences. If all you want is a quick means of communicating abroad, go with one of the cheaper apps. But if your goal is to start learning a language, Oxford is the way to go. And if you're unsure which app is right for you, you can download a free, stripped-down version from Oxford that will give you a feel for the full product.

Frustrations: Each app works like a classic travel phrase book, featuring more than 600 phrases. The apps come in languages that many competitors ignore, such as Swahili and Vietnamese. But Lonely Planet's print phrase books are far more in-depth than its apps are. Also, there are some technical problems: When you choose a phrase, you see the translation quickly, but there's an odd lag before you hear the audio clip. The search feature is woeful, failing to retrieve common synonyms for words. If you type "bathroom" in the search field, it finds nothing. Type "toilet," however, and the app fetches five relevant phrases. In short, you get nearly the same quality with Coolgorilla's apps at a tenth of the price.

Overall: This being LP—and therefore hip—the apps also include all sorts of sentences overlooked by stodgier, traditional phrase books, such as "I'm looking for a gay venue," "Do you have vegetarian food?" and "I'd like a SIM card for your network." LP is probably most useful for languages that other competitors miss.