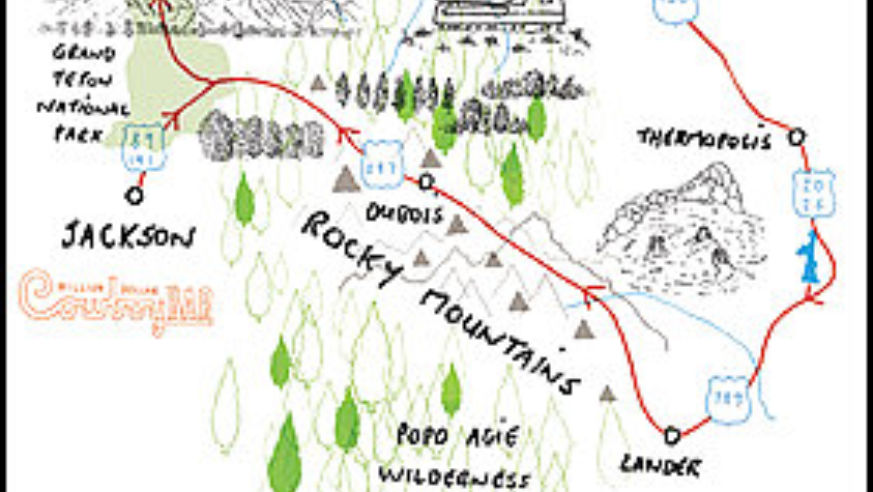 Searching for the authentic in a land built on legend? In Wyoming, the two coexist in the most beautiful way.

The West doesn't make you wait long for a scenic view. Within 45 minutes of leaving Jackson Hole Airport, my friend Josh and I find our first frame-worthy landscape: Like gigantic arrowheads rising from the Snake River valley, the mountains that Ansel Adams made famous are unmistakable from the southern entrance ofGrand Teton National Park. The tallest peak, the 13,770-foot Grand Teton, has beckoned climbers since it was first ascended in 1898—and it has inspired less-adventurous gawkers for even longer. We hop out of the car to snap some photos alongside a busload of German tourists, and admire the mountains' reflections in Jenny and Jackson lakes.

The eight-mile-long John D. Rockefeller, Jr. Memorial Parkway links Grand Teton toYellowstone National Park, and both are covered by the same seven-day, $25 admission fee. We've set aside the bulk of our day for visiting Yellowstone, which, at 2.2 million acres, is more than seven times the size of Grand Teton. Exploring all of it would be nearly impossible in the time we have, so Josh and I decide to tackle only the 134-mile Lower Loop road, which leads to many of Yellowstone's highlights, like Old Faithful and the Fountain Paint Pot. After a quick lakeside lunch, we head north past Fishing Bridge and catch our second big sighting of the day: a herd of buffalo crossing the plain just 15 yards away. There are more than a dozen of them, all with thick brown coats and small birds perched on their backs.

Artist Point is our next stop, and it's clear why painters have been drawn here for generations: It's the perfect vantage point for taking in the 20-mile-long Grand Canyon of the Yellowstone and the mighty Lower Falls, a cascade of white water that drops more than 300 feet. We find a narrow slot among the crowds to snap a photo and then move on.

After driving past lodgepole-pine forests still scorched from the wildfires of 1988 and the Lower Geyser Basin's 18 square miles of hot springs, geysers, and pools, we check in to theOld Faithful Inn, a 105-year-old National Historic Landmark on the southwestern edge of the Lower Loop road. The 327-room log-and-timber hotel has a seven-story lobby ringed by balconies and sits directly in front of the geyser that it was named after, which erupts every 90 minutes. At 8:02 p.m., we catch the spray before sitting down to bison rib eyes from the all-you-can-eat buffet at theOld Faithful Inn Dining Room.

RODEO DRIVE
In the morning, Josh and I set out on a final Yellowstone hike. Near Indian Pond, we follow a muddy trail to the edge of Yellowstone Lake, and along the way we find thick tufts of black and tan fur, fresh off the backs of the bison. We both grab a few handfuls, excited to be off the beaten path, however briefly.

Teddy Roosevelt called the Buffalo Bill Cody Scenic Byway the 50 most beautiful miles in America; it spans the distance between the park and Cody, Wyo., and as we drive east, it cuts through the basalt cliffs of the Wapiti Valley and the sagebrush-covered plains and dense firs of Shoshone National Forest, one of the few remaining natural habitats harboring grizzly bears and wolves.

Around midday we reach Cody, a cowpoke town founded by prodigious buffalo hunter and traveling entertainer William F. Cody, a.k.a. Buffalo Bill, in 1896. TheBuffalo Bill Historical Center, which has five distinct museums in its seven-acre facility, pays fitting tribute to its namesake as well as the Wild West experience. There's the Buffalo Bill Museum, dedicated to Cody's life and legend; the Whitney Gallery of Western Art, containing works by Frederic Remington and others, as well as a reconstruction of Remington's painting studio; the Plains Indian Museum, devoted to the culture and crafts of the Arapaho, Crow, Cheyenne, Kiowa, Comanche, Blackfoot, Sioux, Gros Ventre, Shoshone, and Pawnee Indian tribes; the 5,000-gun Cody Firearms Museum; and the Draper Museum of Natural History, home to the Greater Yellowstone Sights and Sounds Archive, a collection of audio and video recordings and photographs of local ecosystems. I'm particularly drawn to Edgar S. Paxson'sCuster's Last Stand, in the Whitney Gallery, impressive both in its size (almost six feet by nine feet) and in the density of its detail.

Buffalo Bill is still big business in these parts, andThe Irma Hotel, where we stay for the night, makes much of his legacy. Cody founded the inn in 1902 and named it after his youngest daughter. The original cherrywood bar—a gift from Queen Victoria—is still intact, the fireplace contains fossils from the Bighorn Basin, and some of the inn's outer walls are made from local river rocks.

We ask around in Cody for dinner recommendations, and everyone directs us toCassie's, a onetime brothel turned steak house. My buffalo-and-elk burger is right on the money, but the evening's entertainment—a band of geriatric musicians called the Knights of Note—is not, so we visit theCody Nite Rodeoinstead.

The nightly summertime tradition, going strong since the 1950s, earned Cody the title of Rodeo Capital of the World, and it draws large crowds looking for cold beers, a starry sky, and the chance to watch some of the best bull and bronco riders in the country. Each event features about half a dozen high-adrenaline contests, like steer wrestling and barrel racing.

HOT SPRINGS FEVER
The next day, we load up on homemade biscuits and gravy, sausage, and home fries atPeter's Cafe Bakery and then go in search of Western shirts. The Traditions West Antique Mall on 12th Street delivers. Among the racks of rusty signs and silver belt buckles, we find a trove of flashy cowboy shirts with snaps down the front and embroidered flowers.

Eighty-five miles down the road, past abandoned ranches and abundant patches of purple irises, we arrive in Thermopolis, a small town with a huge mineral hot spring gushing 3.6 million gallons of water each day. Josh and I put on our swimsuits and take a tension-melting dip in the 104-degree waters atHot Springs State Park, a free public recreational area with indoor and outdoor pools fed by the spring.

About an hour and 45 minutes south, after passing through tunnels carved from 600-million-year-old granite, we pull into the town of Lander at 9:30 p.m. and are disheartened to find most everything closed. The owner ofCowfish, a restaurant with an on-site microbrewery and an organic vegetable garden, takes pity on us and puts in our order as the last one of the day. We spend the night at thePronghorn Lodge, a no-frills motel next to the Popo Agie River.

THE ACTION IN JACKSON
Rock formations are Lander's claim to fame, from the area's hundreds of challenging climbing spots to theSinks Canyon State Park, named for the way the Popo Agie River disappears into underground limestone caves for about half a mile before rising and reemerging. Josh and I don't have enough time for a climb, so we take a walk by the river's edge and toss fish food from a dispenser in the park to a school of trout who nose right up to the surface to eat.

On our way back west, we pull off at the one-road town of Dubois (pronounced "doo-boys") and grab a booth and a bowl of chili at theCowboy Cafebefore continuing on toward Jackson. Once we clear the Togwotee Pass, the snowcapped Tetons come into view. By the time we reach the resort town, at 6,237 feet above sea level, the temperature has dropped at least 10 degrees. As the sun sets, Josh and I walk under the town square's four elk-horn arches, made up of thousands of shed horns recovered on the National Elk Refuge.

With fancy new shops and cafés, Jackson threatens to become another Aspen or Vail, a little too glossy for its own good, but the 73-year-oldMillion Dollar Cowboy Bar, with antique rifles in glass cases and a bar covered by more than 600 silver-dollar coins, retains the best of the town's original spirit. In spite of its status as a well-oiled tourist trap, the bar is still popular with locals, who watch country bands six nights a week from leather-saddle bar stools. Out here, under these wide-open skies, there's plenty of room for a little artifice alongside the authenticity.

WYOMING DRIVING TIPS
Yellowstone is in the midst of a 20-year highway-repair program, so check for road closings on your route before setting out. A portion of the northwest side of the Lower Loop closed for the season on August 17; for other alerts, call the Yellowstone Current Road Report Hotline (307/344-2117). For advisories elsewhere in the state, consult the Wyoming Department of Transportation's Travel Information Service (888/996-7623, wyoroad.info).