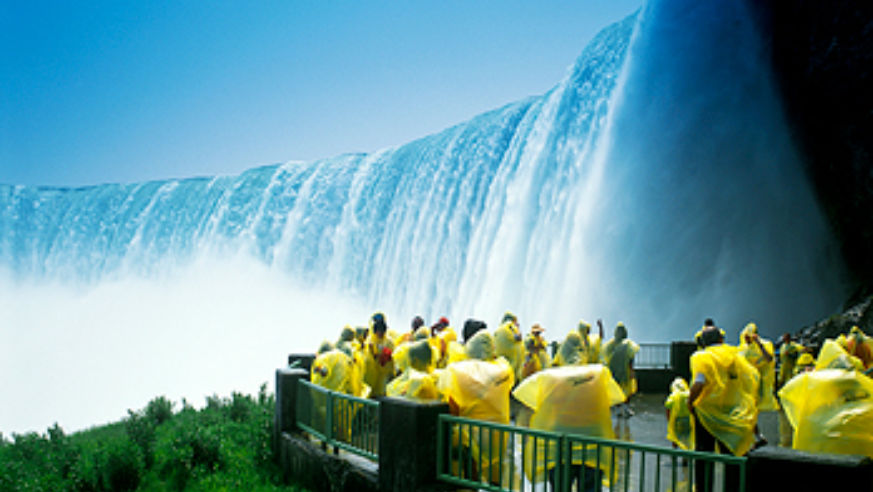 From the thundering roar of Niagara Falls in the U.S. to the elegant veil of Angel Falls in Venezuela, we found the world's most photogenic waterfalls—and share the best ways to see the action in person.

Few things in nature are as mesmerizing as a waterfall—the thunderous roar as water spills over cliffs, the light glistening off the spray, the sheer force of it all. We found the 10 most enticing cascades on the planet. Some are obvious choices (who could resist the honeymooners' classic Niagara?), others are more obscure (ever heard of Langfoss?), but they all share an important quality: One look, and you're bound to be transfixed for hours.

The most powerful waterfall in North America, Niagara straddles the international border between Canada and the U.S., near Buffalo, New York. It is divided into three distinct cascades: The 167-foot-high American Falls and the 181-foot-high Bridal Veil Falls sit on the U.S. side; the 158-foot-high Horseshoe Falls drops on the Canadian. People debate which country holds the better view, but the truth of it is, the best vantage point isn't from either shoreline. It's from the water. The Maid of the Mist ventures to both sides along the Niagara River. The 600-passenger vessel gets so close to the action, in fact, that guests are outfitted with rain ponchos to keep them dry from the torrential spray. If you do take the half-hour ride, you'll join the company of former passengers Theodore Roosevelt and Marilyn Monroe (open April through late October, $13.50 per person).

Closest major city: Niagara sits 17 miles north of Buffalo; from there, the falls are an easy 25-minute drive along I-190.

Best time to go: Summer crowds can overwhelm, so visit during the shoulder seasons instead. You can't go wrong in May, June, and September.

Hanakapi'ai calls to mind the prehistoric, untouched beauty of the landscapes in the Jurassic Park films (minus the dinosaurs, of course). The thin veil of water plunges 300 feet from volcanic-rock cliffs cloaked in tropical rain forest. Better still, to get there, you follow the famously scenic  Kalalau Trail, which traces the lush, green Na Pali Coast for 11 miles along the northern coast of the island. You can access the trail from Ke'e Beach. You don't need a guide for the hike—the trail is clearly marked and well trod—but remember to pack water because the sun can get pretty hot here and the hike is strenuous in a few sections. En route, you'll pass through bamboo forests and cross a freshwater stream; two miles in, you'll reach a quiet inlet of Ke'e Beach, where it's not unusual to spot pods of dolphins playing in the surf.

Closest major city: The trailhead at Ke'e Beach is a quick 15-minute drive north from the town of Hanalei, Kauai. From there, the hike takes two to four hours round-trip, depending on your fitness level and how long you linger at the beach and the waterfall.

Best time to go: You'll find the best deals on flights and hotels from mid-September through December, and from January through May. Avoid hiking the trail in August, when temperatures can climb into the 90s. Be sure to get an early start; the parking lot at Ke'e Beach fills up by mid-morning.

If the Grand Canyon were covered in Technicolor green moss, spotted with 16 lakes across its base, and laced with thousands of falls along its walls, it would look a little something like Plitvice Lakes National Park in southwestern Croatia ($15 entrance fee, per person). The color of the water is intensely turquoise, thanks to the unique mix of minerals and organisms in runoff from the Dinaric Alps. The Plitvice National Park Service offers three-hour tours, starting at $130 for groups, but it's more fun to explore at your own pace, stopping to duck under waterfalls when you need to cool off. Allow a solid two to three hours to poke around, and be sure to take in the view from the first entrance to the park. The perch, high above a series of caves, overlooks all the lakes. Maps for sale ($4 each) at the tourist information booths, located at each of the park's two entrances, will help you navigate the park's labyrinth of trails and boardwalks.

Closest major city: The park is 80 miles south of Zagreb and an easy two-hour drive by car.

Best time to go: The weather is reliably warm and sunny from May through September.

A network of 275 falls that spans nearly two miles across, Iguazú is so striking in its immensity that when Eleanor Roosevelt first saw the falls, she remarked, "poor Niagara." The water plummets with such intense force that the spray almost looks as if it's shooting up from the pools below. One of the most popular sections is Devil's Throat, a horseshoe-shaped waterfall that's 269 feet wide and 2,300 feet long. You could visit Iguazú on your own, but you'll see more with an experienced guide. The full-day excursion with Viator takes you by bus to Devil's Throat and the falls' Upper and Lower Circuits and also grants you access to the Train of the Forest, a railway system that travels through the park and to the footbridges overlooking the falls ($35 per person).

Best time to go: For the best prices and warm temperatures (75 to 85 degrees Fahrenheit), go in October. Avoid January, February, and Easter vacation, when Argentines and Brazilians flock to the falls. And stay away during May and July, the two rainiest months.

A poster child for the American West, this three-tiered fall stretches 2,425 feet from top to bottom. The waterfall itself is gorgeous, but it is the surroundings-granite cliffs and Giant Sequoia trees-that make it one of the most striking sights in the country. The falls are visible from many places around Yosemite Valley, particularly near Yosemite Lodge. From the lodge's parking lot, you can get even closer by taking one of the  National Park Service's free, 20-minute shuttle bus rides to stop no. 6, where a one-mile loop trail leads to the base of Lower Yosemite Fall.

Best time to go: The falls are at their most spectacular when the winter ice and snow are melting, from March to June. Peak flow is in May.

More than twice as high as Niagara Falls and about a mile across, the absolute mass of this gusher is mind-boggling. The force of the water falling into the pool below is so great, in fact, that on clear days you can see the spray from as far as 30 miles away. The local populace is equally impressive: Baboons, elephants, and hippos are often spotted along the shores of Victoria.Safari Par Excellence can set you up with everything, whether you're looking for a simple rafting trip on the Zambezi River leading up to Victoria (from $135 per person for a half-day) or a helicopter ride to view the white rhinos in nearby Mosi-oa Tunya National Park (from $120 per person).

Closest major city: Livingstone, Zambia, is about eight miles from Victoria Falls. Most visitors fly into Livingstone International Airport and then take a shuttle to their hotel, where tour operators pick up guests and transport them to the falls.

Best time to go: The perfect window is from February to May, when the rainy season has just ended but the falls are still gushing.

Set on the southwestern tip of the South Island, Fiordland National Park is perfectly calibrated to create cascades: The rugged landscape gets a steady supply of rain 300 days a year and has hundreds of falls to show for it. The true masterpiece of hte bunch is Sutherland. Its water drops 1,904 feet and shifts to the right at one point and then back to the left at another, forming three distinct sections. The best way to see the trio is by hiking a three-mile portion of the Milford Track, one of New Zealand's most popular trails. You can access the Milford near the town of Quintin, at the Quintin Hut, then follow the trail south for approximately 45 minutes to the base of the falls.

Closest major city: Fiordland National Park is about 280 miles southwest of Queenstown. Most visitors rent a car to make the drive, which takes about five hours from Queenstown.

Best time to go: Go during New Zealand's summer, December to February, when the days are long and the temperatures hover around a comfortable 70 degrees Fahrenheit.

Located on the southwest coast of Iceland, this is one of the most unconventional-looking waterfalls around. It's two-tiered, and even though neither drop is particularly high, together they make for an incredible sight. The first fall cascades to the right, the water churning around before hitting a sheer cliff, where it turns to the left and drops again. Viator Tours operates a half-day trip that stops at Gullfoss and two more of Iceland's biggest attractions: Geysir, which can spout water up to 230 feet high, and the Kerid volcanic crater ($88 per person).

Closest major city: Viator Tours provides transportation to and from Reykjavik. The bus ride is 75 miles and takes about an hour and a half.

Best time to go: Go during June, July, and August, when the ice has melted and temperatures are at their warmest (ranging from 55 to 60 degrees Fahrenheit).

The tallest waterfall in the world at 3,211 feet, Angel Falls is so high that some of the water evaporates before it even reaches the pool below. When you look up from the base, the waterfall seems to come from nowhere. Unlike most falls, this one isn't fed by snowmelt, a lake, or a river, but by rainfall from the tropical clouds. Getting to and from Angel Falls on your own is logistically tricky, so it's necessary to see this cascade with a guide. The three-day tour from Akanan Travel & Adventure includes airfare from Caracas, Venezuela's capitol, to Angel Falls; hammocks to sleep on; all meals; and insider access to the falls, including hikes, canoe rides, and a dip in a hidden pool at the base of the waterfall ($450 per person).

Closest major city: Angel Falls is located in  Canaima National Park, which has an on-site airport that connects visitors to and from Caracas.

Best time to go: Akanan's tours run from July through November, when the waterfalls flow is at its heaviest.

Instead of falling in a straight drop like most waterfalls, Langfoss slips down a cliff, maintaining contact with the rocks the entire way down, before spilling into Akra Fjord. Langfoss isn't the biggest waterfall in Norway, but its combined height (2,008 feet) and width (205 feet) are an impressive combination. The mountainside in the background turns bright green with new vegetation in the summer, providing a striking contrast to the whitewater of the falls and the charcoal-gray rocky outcroppings. It's one of the few waterfalls in Norway that hasn't been tapped for hydroelectric power and is still in its natural state. The  Langfoss Waterfall Fjord Cruise travels past tiny farms and rugged mountains on its way to the gusher ($45).

Closest major city: From Oslo, you can drive the 246 miles (about five hours) to the small town of Etne, where Langfoss falls; you can also fly from Oslo directly into Haugesund airport and then drive 43 miles to Etne.

Best time to go: The weather around Langfoss is at its best from June through September.

Top 10 Most Travel-Inspiring Films of the Year