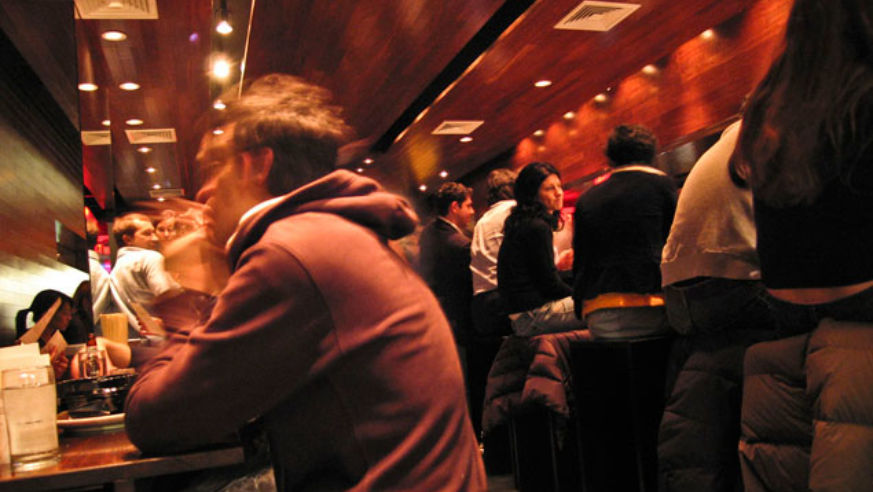 Momofuku, in New York City, is a bustling hotspot for Korean-fusion dishes.

Some of the most popular foods—like Asian noodles, gastropub fare, sushi, and locally grown produce—were relatively unknown only a generation ago. Here, we recognize, and recommend, some of the restaurants and chefs that changed the food world.

It wasn't long ago that the phrases "local food," "gastropub," "New Nordic," or even "rustic Italian" would have left most Americans scratching their heads in confusion. Now, thanks to pioneering chefs like Alice Waters and Mario Batali, we all know a lot more about where our food comes from and the tradition that informed its preparation. Here, some of the standout restaurants that started it all, plus tips about how to place your order and, in some cases, more affordable offshoot restaurants that still live up to the quality of the original.

GET INSIDE THE RESTAURANTS!

Ssäm Bar, one of restaurateur David Chang's empire of 10 Korean-fusion restaurants, opened in 2006, on the heels of Chang's Momofuku Noodle Bar ("Momofuku" is a reference to Momofuku Ando, the inventor of instant noodles). Ssäm, with its cozy communal-seating bar and busy din, soon became an instant fixture and a destination on the NYC dining scene after it ditched its initial "Asian burrito" concept. (Trivia: "Ssäm" means "wrapped" in Korean.) Well-composed dishes like soft, savory steamed pork buns with cucumbers, scallions, and hoisin sauce, and raw seafood, such as the striped bass with plum, cilantro, and green peppercorns, are hallmarks of the menu.

How to order at Ssäm Bar: This menu of small plates is intended for sharing and nibbling. Or, make a quick pit stop by grabbing a seat at the adjoining, newly revamped bar, Booker and Dax, and ordering a drink like the Laurel & Hardy, made with rye, cognac, maraschino, fernet, benedictine, and mole bitters ($15), plus an order of steamed pork buns ($10) or a plate of ham slices straight from farms in Kentucky or Virginia (momofuku.com/restaurants/booker-and-dax) from the limited bar menu. For sheer per-person savings, you can order an entire pork shoulder (the "bo ssäm" meal) for six or more people ($200) or a newer menu item, the whole rotisserie duck for three to six ($140)—each comes equipped with a selection of sides like oysters, in the case of the pork shoulder, or chive pancakes with the duck (momofuku.com).

Here in the U.S., get your Norse fix from New York City restaurant Acme, whose chef, Mads Refslund, was one of Noma's founders. The menu is divided into four distinct parts: raw, cooked, soil, and sea/land.

How to order at Acme: Choose a few small plates and pass 'em around. Acme recommends that new diners try the country toast with nectarine, brie, carmelized onions, and honey ($12), farmer's eggs with Parmesan and cauliflower ($10), and the pearl barley and clams dish, which is packed with scallops, artichokes, and roasted sunflower broth ($19, acmenyc.com).

That "slow food" movement that's so trendy right now? Chez Panisse started it all four decades ago. Chef Alice Waters opened Chez Panisse in 1971, with a menu emphasizing locally and organically grown ingredients and sustainable production methods. Her first creations, such as a pate en croute and an almond tart, wowed critics and attracted the attention of culinary luminaries such as Julia Child, and the place has been an institution ever since.

Famous New York Times restaurant critics Ruth Reichl and Frank Bruni have each given Mario Batali's NYC restaurant Babbo three stars since the place opened, in 1998. Equipped with knowledge gained from spending three years training in a small Northern Italian village, Batali brings his version of rustic Italian cuisine to the states via the restaurant every day, and is currently serving up new classics like beef-cheek ravioli and oxtail gnocchi.

To soak up Batali's oeuvre for less, check out his restaurant Otto Pizzeria and Enoteca, which dishes up reasonably priced pizza and pasta dishes.

How to order at Otto: The humble signature pepperoni pizza, with its house-cured meat is a can't-miss, the restaurant says ($15). Also keep an eye out for the rigatoni con stracotto, made with braised Berkshire pork shoulder and a tomato and basil sauce ($10) and the vongole pizza, a white pie topped with New Zealand cockles, garlic, and mozzarella ($14, ottopizzeria.com).

When Joël Robuchon opened L'Atelier de Joël Robuchon in Paris in 2003, he simultaneously put a modern twist on French haute cuisine and gave French food a new look and feel: With a kitchen designed so guests can watch the chefs at work, stylized red-and-black décor, and signature dishes including langoustines (large prawns), the concept was so popular that Robuchon opened seven more L'Ateliers (French for "workshops") in seven other cities.

How to order at Salon de Thé De Joël Robuchon in Hong Kong: The sandwiches and pastries are the most popular menu items at the Hong Kong tea salon, so order a sampling of everything with the Afternoon Tea Set for two (about $42), which includes coffee or tea and an artful spread of light bites, including a Norwegian smoked salmon and caviar sandwich, lemon and raisin scones, and Macaroon ganache, plus many more selections, served on a minimalist wooden board (robuchon.hk).

Why eat only the expected cuts from an animal when you can have the whole thing? Chef Fergus Henderson and co-founder Trevor Gulliver opened St. John Restaurant in London in 1994 and promptly put delicacies like kidneys and fried brains front and center on the menu. Upscale restaurants all over the world followed suit. Vegetarians, don't despair: There are plenty of reasonably priced beast-free dishes, including asparagus and hot butter ($12.50), an ever-present green salad ($7), and a cheese and chutney sandwich ($8).

How to order at St. John: To save some serious cash while still being well-fed, head to the bar section of St. John and pick from that menu. Gulliver himself suggests ordering a dish each—the menu changes twice-daily, but past selections have included roast bone marrow and parsley salad ($11) and snails and oakleaf ($11)—then sharing a pudding ($11). A recent menu offered seven different pudding options ranging from chocolate cake and malt ice cream to poached rhubarb and spiced ice cream (stjohnrestaurant.com).

Take a traditional watering hole and infuse it with well-crafted dishes, and you've got a gastropub, a concept that began at The Eagle in London when it was revamped in 1991. A "roast of the day" takes prominence on the menu, and a thinly sliced steak sandwich is also a standby alongside a wide selection of ales (naturally).

One American restaurant that was influenced by goings-in at the Eagle in London is New York City'sThe Spotted Pig, a joint run by designer Ken Friedman and chef April Bloomfield, who has won critical praise for the British and Italian dishes she serves up there.

How to order at The Spotted Pig: Try these wallet-friendly dishes, recommended by the restaurant as imparting the true essence of the place: deviled eggs ($4), chicken liver toasts ($6), and gnudi with sage and brown butter ($16, thespottedpig.com).

Before the name "Nobu" became synonymous with sushi, chef Noboyuki Matsuhisa opened his first namesake restaurant, Matsuhisa, in Beverly Hills in 1987. Critics loved the inventiveness and Peruvian twist that Chef Nobu put on sushi. The famous Nobu in New York City's Tribeca opened in 1997 thanks to a partnership between Nobu and actor Robert De Niro, and dishes like miso-marinated black cod became menu standards. Nobu now has 18 restaurants, from Tokyo to Waikiki.

How to order at Sushi of Gari: A variety of imaginative sushi and sashimi platters are available for under $50 (sushiofgari.com).

Fast food and fresh food are no longer mutually exclusive, thanks to the rapid expansion of the Pret a Manger ("Ready to Eat") restaurant chain, which opened way back in 1986 in London but didn't migrate to U.S. shores until 2000. Pop into one of the chain's 265 stores today (U.S. cities with Pret stores include New York, Washington, and Chicago) and note that the mission is the same as it was back then: freshly made salads, sandwiches, yogurts, and sundries ripe for the plucking from refrigerated shelves are continuously stocked throughout the day, and no unsold selection is stored overnight. Instead, extra food is donated to local charities.

How to order at Pret a Manger: Well, this one's easy. Grab fresh salads, sandwiches, pots of yogurt, and lemonade off the shelf then bring your food to the check-out counter (pretamanger.com).

If you happen to be traveling with a companion who has a food allergy, Planet Raw is the place to bring food fans on a strict diet. The all-vegan, organic, and raw restaurant caused a sensation, as well as inspiring several imitators, when chef Julian Brotman opened its doors in the year 2000 (celebs like Woody Harrelson and Robin Williams are fans of his cuisine). Its drinks menu—actually, make that its "signature elixirs" list—is eye-popping itself, offering up drinks such as Alien Blood, a "savory, salty blend of field greens, cucumber, sea weed, zucchini, salsa, and spirulina" ($9). (Don't worry—there's plenty of plain old organic wine and beer, too.) Even minor details at the restaurant are earth-friendly, from the recycled-paper menu to the sustainable beeswax candles, and budding raw gourmands can take a cooking class with Julian himself on the first Saturday of every month.

How to order at Planet Raw: Divvy up an appetizer of flax meatball sliders concocted from marinara sauce, vegan cream "cheese," and mushroom nutmeat. Then, if you've never had pasta-free pasta, seize the day with Raw's green curry pasta, made from your choice of zucchini or kelp noodles ($17) and Thai nut curry cream. Greens are a classic standby, with 11 different specialty salads and dressings like pumpkin seed oil gracing the menu ($11, planetraw.com).