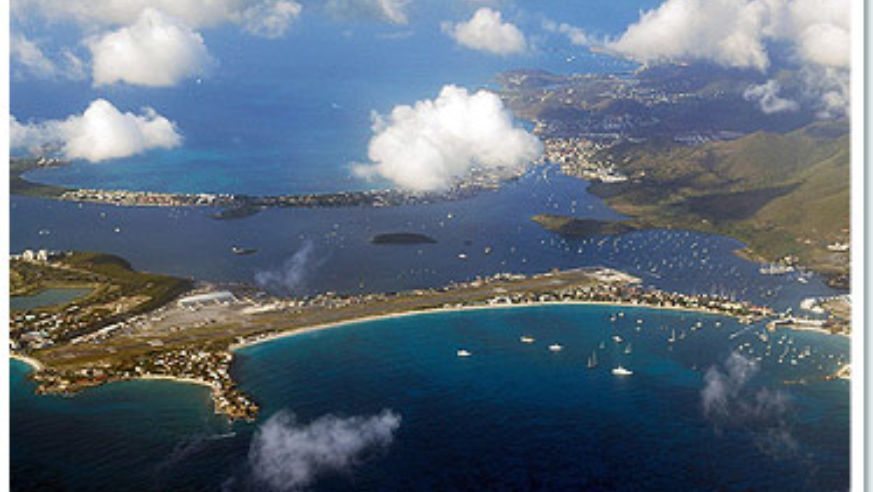 Everyone knows views are best from above. That's why we asked pilots and flight attendants who've racked up millions of sky miles to locate the world's most beautiful approaches. You'll definitely want a window seat on these flights.

Philipsburg, St. Maarten (see photo 1 of 2)
Princess Juliana International Airport is one of the most infamous—and photographed—in the world because its runway starts on a peninsula just hundreds of feet off St. Maarten's shore. "The airport is framed by the beautiful water to the right and front, and the hills that rise in the background," says Captain Bob Raleigh, the Miami chief pilot for American Airlines. He got his start flying fighter aircraft for the U.S. Marine Corps and has been with American since 1986. Landing in St. Maarten stands out to Raleigh not only because it's visually stunning, but because zooming in low over the sand gives passengers a uniquely friendly welcome. "People stand on Maho Beach and wave as you pass over them—very closely and quickly."

Mammoth Lakes, Calif. (see a photo)
"My favorite approach of all was into Mammoth as a storm darkened the Sierras to the west," remembers Doug Winston, a pilot of 26 years based in Bakersfield, Calif., who has flown private prop planes into this tiny, one-runway airport and is the co-owner of a Cessna Turbo 210. "The contrast of dark clouds and mountain rock with the bright-white snow backlit from the east was mesmerizing—especially since we had started the flight in San Diego over the sunny beach and ocean of southern California," says Winston. "It was like flying to a different planet." Now anyone can experience the thrill of arriving at Mammoth Yosemite Airport in the foothills of the Sierra Nevadas; it was opened to commercial planes in 2008.

Hong Kong (see photo 1 of 2)
Asia's cosmopolitan high-rise jungle won over flight attendant Susan Fogwell, a 14-year veteran who's based in New York and works for a major U.S. airline. "Even as often as I've flown, there's still a sense of the wow factor landing there in a huge 747," says Fogwell, who writes about her flight experiences for the Huffington Post and other publications. "On approach, the plane feels like it's in slow motion over the South China Sea. Looming up ahead is Hong Kong Island, where the skyscrapers are incredibly high, very close, and way too numerous to count." Beaches can be seen to the south, and to the north is Victoria Harbour, which separates Hong Kong and Kowloon islands. "It's almost surreal to see the ferries and boat traffic crisscrossing among such immense congestion," says Fogwell. "Even during the day, the colorful neon lights are on, which has an eerie effect when the city is cloaked in smog—and at night, blazing with lights, Hong Kong is definitely dreamy."

Queenstown, New Zealand (see photo 1 of 2)
Sydney-based Owen Zupp may be a first officer for Australia's national airline, Qantas, but he doesn't let national pride cloud his admiration for the drama of landing at Queenstown Airport on New Zealand's South Island. "On a clear day, the 7,500-foot peaks of the Remarkables mountain range are reflected in the glassy surface of Lake Wakatipu, and it's easy to see why the area was picked to double as the mythical Middle-earth in The Lord of the Rings," reflects Zupp. "It's undoubtedly one of the most breathtaking areas around which to fly." The sheer number of ways to take to the skies—from aerobatic joy-flights to parachute and heli-ski operations—testifies to his good taste.

Jackson, Wyo. (see a photo)
Jason Gunter, a corporate pilot of 11 years who has worked for American Eagle Airlines, gets a thrill any time he's assigned to Jackson Hole—whether he lands among the snowy peaks in the height of winter or the green- and yellow-tinged meadows in the summer. "Jackson Hole Airport is at the base of the Tetons, and the airport itself lies within Grand Teton National Park," says Gunter. "The arrival gives you beautiful views of the mountains and is followed by an approach right up the valley, where you get a close-up look at the Snake River."

London (see a photo)
After a long night flying over the black of the Atlantic, the china clangs in the galley as the crew prepares for the breakfast service. "That's when you smell the coffee and lift the window shade," notes Heather Poole, a flight attendant for a major U.S. carrier and author of Gadling's Galley Gossip column. "Morning light streams into the cabin, you squint as your eyes adjust, and there it is: land." As the aircraft descends, drawing nearer to Heathrow Airport, the view picks up momentum—from green pastures to suburban row houses to the spires, bridges, and landmarks of London gleaming below the clouds.

St. George's Parish, Bermuda (see photo 1 of 2)
Flight attendant Heather Zorzini recently retired after 31 years and about 20 million miles aboard Air Canada. Looking back, she says her all-time favorite place to land was Bermuda's L.F. Wade International Airport—for the sheer charm of the isolated, unexpected oasis in the Atlantic Ocean. "The island is just as lovely from the air as it is on the ground," says Zorzini. Deep-green seas fade to pale turquoise as they lap at pink beaches, and pastel houses with white limestone roofs come into focus on the surrounding lush hillsides. "It all creates an achingly picturesque vista," she adds.

Aspen (see a photo)
Most pilots begin perspiring at the thought of landing in snowy Aspen, whose airport requires a rapid, challenging descent at high altitude. But not much fazes David Angotti, who pilots a Cessna Citation X—a seven-person private jet and the fastest civilian aircraft with a max speed of Mach .92. (A typical 747 travels at Mach .85; the Citation X can shave an hour off a transcontinental flight.) "The first time you land in Aspen, it's difficult to believe there's an airport nestled between some of the tallest mountain peaks on the continent," recalls Angotti. "Each time I step off the aircraft and gaze at the towering peaks surrounding the runway at Aspen/Pitkin County Airport, I marvel that this airport is welcome in nature's playground."

New York City (see photo 1 of 2)
Sue Cragg, a Detroit-based flight attendant for Delta Air Lines, remembers her first descent into New York's LaGuardia Airport. "Around the time when I finished flight attendant training, the FAA said it would soon enforce the rule that no one was allowed in the flight deck below 10,000 feet," Cragg recalls. "But on approach into LaGuardia, the captain called to the back, 'Send the new kid up.' When I entered the flight deck, the sun was setting and the colors of burnt orange and bright red burst in the spring sky. He flew low down the Hudson River past the magnificent cityscape, and the buildings sparkled and reflected the colors as we landed." It still gives her goose bumps after 30 years in the skies.

Oranjestad,Aruba (see photo 1 of 2)
As the assistant chief pilot of United Airlines' Northeast region, James T. Simons Jr. has circled the gorgeous blues and greens of the Caribbean for 21 years, but he can pick his favorite approach in an instant. "After flying over many other islands en route, Aruba stands out like a beacon among the dark-blue Caribbean waters," says Simons. "Descending over the bay toward Aruba's single runway, it's easy to see what sets the island apart: The dry, seemingly desertlike conditions form a visually stunning contrast where the warm waters meet the land." Planes hover low just above the sparkling sea, hugging the coastline as they zero in for their landing at Aruba International Airport, whose runway begins at the water's edge.

• Quiz: Can You Spot the Travel Rip-off?