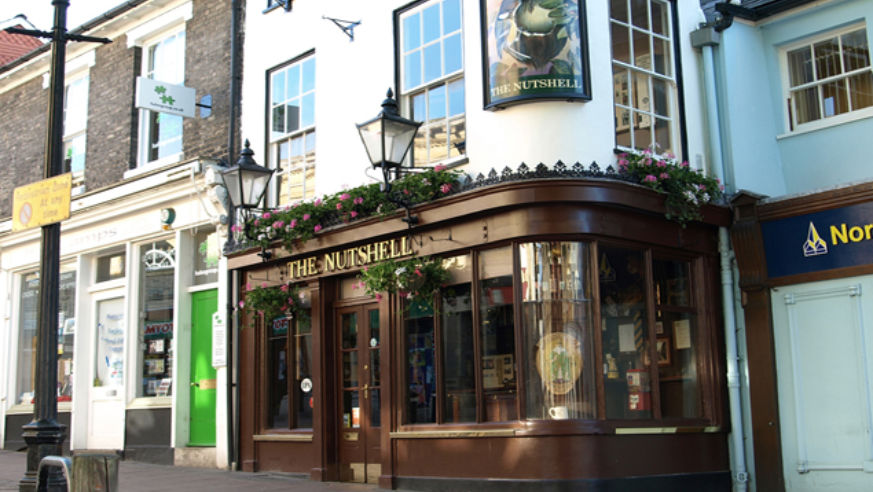 The Nutshell, a 105-square-foot pub in Suffolk, England, sits on a street built in the Middle Ages and served its first pint in 1867.

Sometimes good things come in small packages. These places may be snug, but they have more charm than establishments triple their size.

It's official: Size doesn't matter. At least when it comes to bars, where the make-or-break details aren't the number of stools or the square footage, but how cool the vibe is. With that in mind, we scoured the globe to find the 10 bars that pack the most personality into their tiny spaces, from a London pub with more beers than square footage to a Key West bar that uses coolers instead of taps.

Key West, Florida
Tucked between two buildings on action-packed Duval Street, this 72-square-foot bar is about "the size of a jail cell," quips its Midwestern-expat manager, Josh—but the vibe is decidedly upbeat and tropical. Walls are painted with palm trees and waves, and there's a bin packed with hollowed-out coconuts and pineapples, which the bartender fills with beach-ready concoctions on demand. If strawberry daiquiris ($7) aren't your drink of choice, the Smallest Bar also stocks bottles of beer in coolers of ice ($4 and up). A colorful collection of hula hoops is stacked along the walls, and impromptu wiggle parties on the sidewalks outside are encouraged—right up until the 4 a.m. closing time.
124 Duval St., 305/294-8507.

Lynd Junction, North Queensland, Australia
Two patrons—nearly the entire population of this remote, three-person North Queensland town—can fit comfortably into this 21-square-foot watering hole. Not surprisingly, Oasis Roadhouse is the tiniest establishment in all of Australia; the bar top itself is only 21 inches wide. The scenery isn't picturesque (it's next to a service station along the Great Inland Way, a dusty two-lane that stretches from the Outback to the Coral Sea), and the decorations are nil, save for a single painted cowboy and some beer logos plastered on the walls. But what it lacks in ambience, it makes up for in convenience: The spot, which serves bottled beer and liquor, isn't named Oasis for nothing—it's the only bar within a 37-mile radius.
Kennedy Developmental Rd., Mt. Garnet QLD 4872, 011-61/740-625-291.

Avon Lake, Ohio
Nestled on a tree-lined, residential street just a block from the shores of Lake Erie, this local dive packs a lot into its 600-square-foot space. Close Quarters Pub is divided among 12 chairs, 11 stools, and prize-worthy collections of sports pennants, vintage postcards, yacht-club flags, and maps of Lake Erie, which wallpaper the walls and ceiling. The chicken wings are extremely popular (and miraculously made on-site, in the tiny kitchen), and the domestic brews on tap, including local favorites from Cleveland's Great Lakes Brewing Co., will only set you back $4.50 a pint.
31953 Lake Rd., 440/933-5217.

Dunedin, New Zealand
At less than six feet wide, New Zealand's smallest bar doesn't even have toilets. What Mou Very lacks in facilities, it more than makes up for with a generous wine-and-beer selection, sinfully rich espresso (roasted in-house by owner—and former Dunedin mayoral candidate—Olivier Lequeux), and freshly pressed paninis ($3). Exposed brick and orange stools add to the bar's cozy feel, but that doesn't mean it's quiet: Every Wednesday and most Fridays after 6 p.m., a DJ drops in to spin funk and soul tunes.
357 George St., 011-64/3-477-2180.

Cabo San Lucas, Mexico
Located in a crowded Cabo shopping area, this four-stool bar is plastered with signed dollar bills (visitors are encouraged to slap them on the wall) and pictures of tequila-fueled tourists. The signature Mexican spirit is Slims's specialty: There is a wide selection of Jose Cuervo and Hornitos tequilas and even a try-before-you-buy policy. And if you purchase a $10 Slims T-shirt or hat, the bartender gives you a free shot. But be warned: Slims serves only beer and tequila—no mixers—so come prepared to sip your liquor straight.
Boulevard Marina, Interior PlazaMariachis, 143-538, no phone.

Suffolk, England
This 105-square-foot pub, which sits on a street built in the Middle Ages, served its first pint in 1867. No more than 20 people can squeeze into the historical hangout, which offers bottled beer plus two ales on tap, including the Suffolk-brewed Greene King IPA ($4.50 a pint). The Nutshell's decor is not for the faint of heart: Stuffed animal heads line the walls and a skeletal mummified cat, believed to be 400 years old, hangs from the ceiling—talk about medieval!
The Traverse, Bury St. Edmunds, 011-44/128-476-4867.

Sta. Maria, Grisons, Switzerland
Despite its pink walls, low-slung ceilings, and slight 92 square feet, the Smallest Whisky Bar on Earth is mighty. With 204 whiskeys—including Scotch, Irish, and Japanese blends, plus sweet, house-made concoctions like whiskey and cream—its menu packs a punch, and so does its owner, Gunter Sommer. In 2007, he persuaded the Guinness World Records organization to officially change the name of its "Smallest Pub" award to "the Smallest Permanently Licensed Bar in the World"—then promptly snagged the honor himself.
7536 Sta. Maria, Val Müstair, Graubünden, 011-41/76-422-0308.

Tokyo, Japan
This skinny, two-story joint is hidden among a cluster of bars beneath the train tracks on Nonbei Yokocho, which aptly translates to "drunkard's alley." But Piano Bar's 32-square-foot size belies its opulence: The interior is modeled after a German castle, decked out with a faux stone fireplace, crystal chandeliers, gold-framed photos of jungle animals, and red velvet walls. You can even drink your beverage—try the sweet rose water and wine cocktail ($10)—out of a glass chalice. And when you want a refill, just ring one of the tiny bells set on every table for service.
Editors' note: Though this bar was not directly impacted by the March 11, 2011, earthquake or the subsequent tsunami, we do encourage readers to check the current State Department travel alert for the country before making any travel plans.
1-25-10 Shibuya, Tokyo, 154-0002, 011-81/3-5467-0258.

Beijing, China
Before tripling in size to a whopping 484 square feet, 12Sqm held the title of Beijing's smallest bar. Still, the pub-style nook—which can fit over two dozen people—keeps things cozy with dim lighting, cushioned window seats, and a bookshelf lined with Lonely Planet editions (the bar's Australian owner worked as a tour guide). Drinkers can pick from 140 different spirits, including several high-end Scotches and lots of imported beer starting at $3 (a favorite is Coopers, brewed in Adelaide). Hungry patrons might even get lucky: Whenever the owner's feeling generous—which is often—he stocks 12Sqm's shelves with piping-hot meat pies, an Aussie delicacy.
Corner of Nanluogu Xiang and Fuxiang Hutong, Dongcheng District, Beijing, 011-86/10-6402-1554.

London, England
Set at the back of Borough Market near the Thames River, the purple-painted, 91-square-foot Rake is known for two things: being London's smallest pub and hosting one of the most international beer selections in the city. The bar—which was opened in 2006 by the duo behind Utobeer, a popular British beer retailer—offers eight ever-changing drafts and 160 bottled beers from around the world, including obscure picks from Corsica, Indonesia, and Mozambique. Food is limited to bar snacks like nuts and olives, but if you're craving dessert, order a Cookie Beer, which is inspired by a Belgian biscuit recipe. Bonus: If the bar is too cramped, you can head outside to the patio, where you can drink with more elbow room.
14 Winchester Walk, SE1 9AG, 011-44/20-7407-0557.