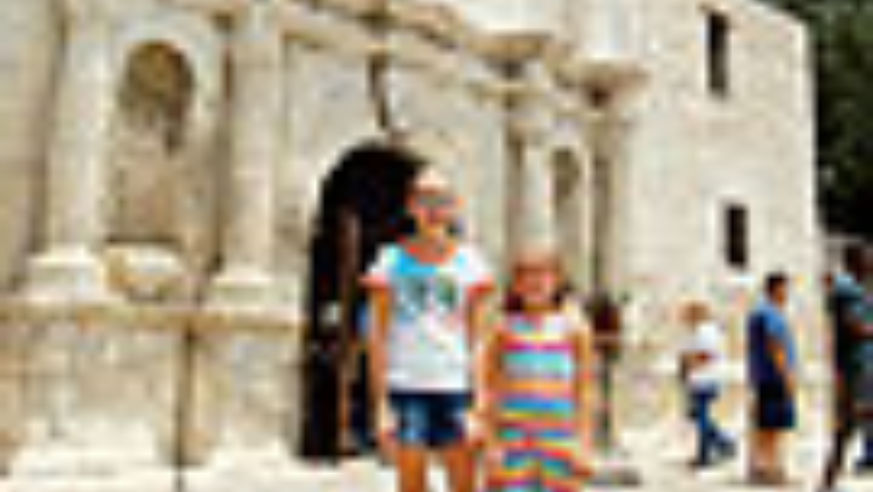 Here's our pick of important American landmarks that every kid should visit. Our choices might surprise you.

Beyond fun and relaxation, vacations also provide opportunities to explore, learn, and grow. While these sights are breathtaking at any age, there's something extra special about seeing them as a child—or just through the eyes of one. (Use discretion: Some places simply aren't appropriate for younger kids.) Plus, see family trip photos from readers in our slide show.

Ellis Island Museum, New York City: About 40 percent of Americans are descended from someone who immigrated through this station. Visiting is a powerful experience, thanks to the smartly curated exhibits—and you get a terrific view of the Statue of Liberty on the same ferry ride (ellisisland.org, free guided tours, audio tours $8).

Lincoln Memorial, Washington, D.C.: This is a city of inspiring sights: the Washington Monument, Arlington National Cemetery, and the Jefferson and Vietnam Veterans memorials. Still, the 19-foot marble statue of our 16th president is a can't-miss (nps.gov/linc, free).

Colonial Williamsburg, Williamsburg, Va.: Kids growing up with e-mail and iPods might not believe it, but there was life before electricity, and even before a United States. The 301-acre open-air museum features hundreds of restored, reconstructed, and historically furnished buildings, and costumed guides tell the stories of the men and women of the 18th-century city (history.org, $35, kids 6-17 $18).

USS Arizona Memorial, Pearl Harbor, Hawaii: Sunk by a surprise attack on December 7, 1941, the USS Arizona remains six feet below the water as a lasting monument to World War II veterans. A memorial that spans the sunken battleship was dedicated in 1962 (nps.gov/usar, free).

Grand Canyon National Park, Ariz.: Look at what wind, water, and erosion can do: At 5,000 feet deep and an average of 10 miles across, it's the most magnificent natural wonder in the country, and perhaps the world (nps.gov/grca, $12, vehicles $25, kids 15 and younger free).

Redwood National Park, Calif.: Everyone feels humbled, in a good way, when exploring in the shadows of 300-foot-tall trees—many of which are more than 1,000 years old (nps.gov/redw, free).

Monticello, Va.: Besides the Declaration of Independence, one of Thomas Jefferson's other masterpieces is the estate he designed and tinkered with over the course of five decades, located seven miles from the University of Virginia—which Jefferson also founded (monticello.org, tours from $15, kids 6–11 $8, free for children 5 and under).

Gettysburg, Pa.: It's never too early to learn about the sacrifices of those who came before: In the bloodiest war in our nation's history, this Civil War battlefield was the bloodiest of all. Visitors can also see the spot where President Lincoln delivered his famed Civil War speech in 1863 (nps.gov/gett, free).

The Alamo, San Antonio, Texas: The stories of courage in the face of overwhelming forces will be remembered (thealamo.org, free).

Niagara Falls, N.Y.: The most powerful falls in North America, with as much as six million cubic feet of water plummeting over the gorge every minute, were awesome when your grandparents honeymooned there and remain awesome today. It's worth crossing into Canada to see them from the other side (niagarafallsstatepark.com, free).

Freedom Trail, Boston: Visit Bunker Hill, Paul Revere's house, and other spots pivotal to the American Revolution. Walk the trail on your own for free or book a tour with a guide in 18th-century garb (thefreedomtrail.org, $12, kids $6).

Independence Hall, Philadelphia: It's where George Washington was appointed commander of the Continental Army, the Declaration of Independence was signed, and the founding fathers truly laid the nation's foundation, in the form of the U.S. Constitution (nps.gov/inde, free but tickets for timed tours are required from March 1 to Dec. 31).

Walt Disney World Resort, Orlando, Fla.: For more than 35 years, this resort destination—it's more than just a theme park—has been bringing the magic to kids and their grown-ups. For tips on navigating its 47 square miles, The Unofficial Guide to Walt Disney World With Kids (see our review) is a great place to start (disneyworld.com, $63 for kids 3-9, $75 for 10 and older).

Hey, we're listening: A few readers have suggested we should add Yellowstone National Park to the list. So, what do you think—should we make it 16 Places Every Kid Should See, and add Yellowstone? Let us know in the comments below.

> See the slide show for 15 Places Every Kid Should See