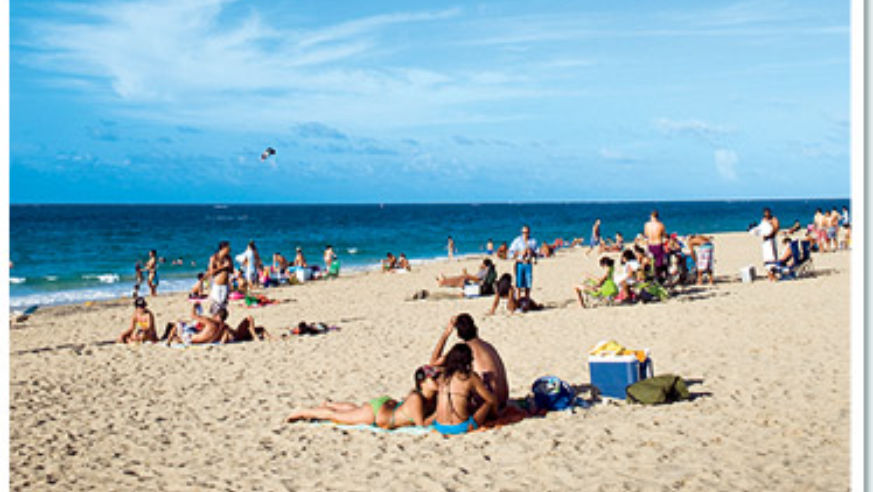 Follow our insider tips to the hidden hotels, lively local watering holes, and one-of-a-kind experiences most of the city's visitors never discover.

Of the nearly 5 million tourists who pass through Puerto Rico's capital each year, only a fraction actually stray from the beaten path that connects the cruise-ship port with the city's swanky casinos and resorts. They have no idea what they're missing.

A low-key waterfront B&B
High-rise hotels far outnumber San Juan's small, family-run options—which might be what inspired the name of the Numero Uno Guest House, a 15-room inn in Ocean Park, five miles east of Old San Juan. The decor plays up the coastal location, with rattan furniture and unparalleled Atlantic views; and at the on-site 50-seat restaurant, Pamela's, creative seafood dishes like scallops in grapefruit-and-pink-peppercorn salsa are delivered to tables planted right on the beach. Calle Santa Ana 1, numero1guesthouse.com, rooms from $99, entrées from $25.

An iconic bank's secret stash
The 11-story art deco Banco Popular skyscraper has been a popular landmark in Old San Juan for 70 years, but few visitors know of the museum on its 3rd floor. The Sala de Exhibiciones Rafael Carrión Pacheco showcases island-centric exhibits, such as an exploration of area coffee plantations and a 38-foot scalemodel of the old city. Calle Tetuán 206, 787/722-7389, Tues.–Sun. 10 a.m.–5 p.m., free.

Umbrella drinks have some stiff competition
Move over, piña colada. These days, the top cocktail in town is the chichaíto (cheeh-chah-ee-toh), a traditional after-dinner concoction embraced by a new generation of bar-goers. At the Carnival-mask shop turned bar Los 3 Cuernos on Old San Juan's Plaza de Colón, the rum-and-anise mixture is spiked with fruit juices and served by the shot, by the half-pint, or paired with a six-pack of local Medalla beer. Calle San Francisco 403, shot $1.

The coffee of kings
Talk about a pick-me-up with a pedigree. Puerto Rican coffee was the favorite of 18th-century European courts, and even as modern brew trends come and go, the island's beans still rank near the top of connoisseurs' lists. Locals order it either black (expreso), with a touch of hot milk (cortadito), or mixed with plenty of steamed milk (con leche). One of the city's best coffee spots is Caficultura, a former Old San Juan residence decorated with chandeliers, marble-topped tables, and heavy wooden doors propped open for easy people-watching on the Plaza de Colón. Calle San Francisco 401, 787/723-7731, coffee from $2.50.

Spanglish was invented here
A singsong, rapid-fire cadence and a tendency to blend English with Spanish set the Puerto Rican tongue apart. Even first-timers may recognize some words: The structure that houses the bank? It's a bildin (bil-deen), and probably not where you'd goof around, or gufear (goo-feh-ar).

Where the jukebox still reigns
Closet-size Café Celeste is often overshadowed by the famous Nuyorican Café across the street, but the scene inside this Old San Juan hole-in-the-wall is no less worthy. Along with a handful of other timeworn joints, it makes up "the jukebox walk," a circuit of laid-back bars where the vellonera—a jukebox filled with salsa and mambo, from Tito Puente to Bobby Valentín—is the draw, and festive crowds of singing patrons are known to spill outside onto the cobblestones. Callejón de la Capilla 197, cocktails from $2.50.

Flavored ice, incognito
Sampling San Juan's most underground dessert feels like stepping into a spy movie: Visitors enter an unmarked apartment building, call to the proprietor through an iron gate in the lobby, and within minutes, Eddie shows up to tout the day's flavors—say, pineapple and tamarind. When he returns with the limber, a flavored-ice treat that's the love child of shaved ice and sorbet, it's delivered in a plastic Dixie cup, straight from the freezer—the same way it has been for 40 years. Caleta de las Monjas 9, limber 75¢.

A bygone vacation village
The Condado district, four miles east of Old San Juan, is now synonymous with condo towers and trendy shops, but it began as a sleepy, turn-of-the-century beach community where the city's wealthiest families kept grand, Spanish-style second homes. A few of the historic buildings remain, to new purpose: One houses El Canario Inn (Avenida Ashford 1317, canariohotels.com/inn.htm, doubles from $90), and another is the restaurant Ajili Mojili, where travelers can taste traditional Puerto Rican dishes in an old-fashioned setting (Avenida Ashford 1006, 787/725-9195, entrées from $16).

A high-flying show
On weekends, while sightseers throng El Morro, the 16th-century citadel at the northwest tip of Old San Juan, residents take to the lawn in front of the fort to unfurl an impressive array of kites. The real spectacle is on Sundays, when families come from inland to launch their elaborate fliers, made from old fabrics and papier-mâché. El Morro, nps.gov/saju.

The island's not-so-secret sauce
Just as every Southern barbecue joint has its signature slather, every street-food stall worth its salt in Puerto Rico has its pique, a fiery homemade condiment with a vinegar-and-red-pepper base. You'll find it, often in repurposed rum bottles, on snack counters island-wide.

An all-day arts crawl for $1.50
Thanks to the new Tren Urbano rail system, anyone can embark on a DIY citywide arts tour. From the Sagrado Corazón terminus in Condado, it's one stop to an independent-film screening at the Popular Center's Fine Arts Café cinema (Torre Norte, 787/765-2339, tickets $9.50); five more stops to the Sala Teatro Beckett in Río Piedras, where plays and concerts are staged (Avenida Ponce de León 1008, 2nd Fl., salateatrobeckett-paca.blogspot.com); and then a short walk to the gallery and music venue Río Cantina Urbana (Avenida Ponce de León 1016, 787/282-6262). The cantina's pink-and-blue muraled façade fits right in with the area's graffiti-tagged cafés and old-school holdouts like Heladería Los Chinitos, an ice cream shop that's been going strong since 1964 (Avenida Ponce de León 1061, 787/765-3395).

The next big thing in bags...
It's easy to spot trend-savvy Puerto Ricans: They're often carrying Concalma totes, launched by designer and San Juan resident Matilsha Marxuach. The colorful, sturdy satchels, which come in stripes and floral patterns, are made by the women's collaborative Cooperativa Industrial Creación de La Montaña. Calle San Francisco 207, concalmalinea.com, totes from $25.

A chic hotel with a dreamy view
It's ironic that one of the best hotels in San Juan is actually Moroccan-themed: At 2-year-old Hotel Casablanca in Old San Juan, mosaic tiling and colored lanterns ornament the lavish lobby, and the 35 guest rooms have hand-loomed tapestries and carved-wood furniture. Look out from the rooftop terrace, however—over rows of pastel storefronts and the baroque cathedral in the distance—and you'll see an unambiguously Spanish-colonial scene. Calle Fortaleza 316, hotelcasablancapr.com, rooms from $95.

The city's easiest day trip
A 20-minute drive east of Old San Juan lies Piñones, the best little getaway you've never heard of. There's a palm-lined boardwalk that links several sandy beaches, a handful of tidal pools where beachgoers can sit on flat rocks near the breaking waves, and a slew of huts selling pinchos (skewers of grilled meat and fish). The area is best explored on a bike: You can rent tandems and beach cruisers by the hour at the COPI building near the Boca de Cangrejos bridge. copipr.com, bike rentals $5 per hour.

A market that gets new life after dark
During the day, Plaza del Mercado in Santurce, about half a mile south of Condado, brims with plantains, avocados, mangoes, and folks cooling off with coco frío (coconut water). But after 6 p.m., when the market shuts down, the bars that line the plaza throw open their metal grates to a young, dressed-up crowd that turns the square into an informal block party, liveliest on Thursdays and Fridays. Calles Dos Hermanos and Capitol, 787/723-8022.

A slamming native dance
Salsa fans, meet your next obsession: bomba, created at the end of the 18th century by West African slaves on Puerto Rico's sugar plantations. In DanzActiva's Saturday classes, aspiring dancers can attempt to master the demanding steps, a kind of rhythmic call-and-response with a live band. Calles Norzagaray and Morovis, danzactiva.com, dance lesson $15.