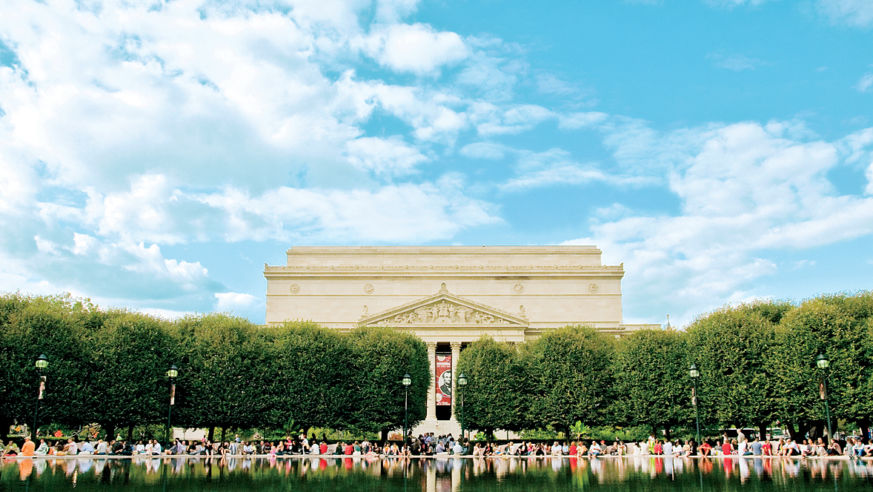 No matter how you voted in the last presidential election, we can all agree that the nation's capital is packed with must-see sights—and tourists. Want fun without the lines, even during the inauguration? Follow these expert insights on how to do D.C. just like a local.

Standing in line is no way to spend a vacation—especially when those lines are longer than an inagural address. Yet the 16 million tourists who visit Washington from around the world every year wind up ensnarled in queues at major monuments for most of their trips. Follow these insights—from a resident expert, budget-minded foodie, and mom—to do D.C. just like a local, even during busy times like the inauguration.

1. Start with an overview

With Lincoln looming large over the National Mall and Arlington Cemetery beckoning two miles across town, it can be tough for first-time visitors to sort through the maze of D.C.'s must-see sites. The best way to dive in is with a brief introduction to them all. D.C. By Footoffers free walking tours that range from two-hour strolls along the Mall to a four-hour "All-in-One" epic that takes in the Pentagon, Arlington Cemetery, and more. If you'd prefer to see the sights while sitting down, Old Town Trolley Tours runs nightly two-hour "Monuments by Moonlight" rides, which cruise past the FDR and Iwo Jima Memorials as evening falls (trolleys depart at 7:30 p.m. from Union Station, $35.10 for adults and $26.10 for kids age 4-12).

Sweeping vistas are a tall order in this low-rise city, where the height of buildings is regulated by an 1899 Act of Congress. But at 150 feet, the uncrowded Pilgrim Observation Gallery at the National Cathedral is your elevator to the sky, with unobstructed 360-degree views. Down on the ground floor you can attend free organ demonstrations every Monday and Wednesday at 12:30 p.m. and explore the architecture of this neo-Gothic behemoth. (Bring binoculars to spot the carved head of Darth Vader outside, near the top of the northwest tower). 3101 Wisconsin Ave. NW, $10 suggested donation

3. Get lost in space

Adults may see D.C. as a wonderland with more than 50 museums to explore. But those with children know to choose wisely—or pay the price. Home to vintage flying machines like Charles Lindburgh's 1927 Spirit of St. Louis plane and the 1969 Apollo 11 command module, the National Air and Space Museum is one of the most kid-friendly branches of the Smithsonian. Its lineup features a 20-minute planetarium show starring Sesame Street characters, and air-travel-themed story times, where little ones can keep their hands busy building model planes and rocket ships. Independence Ave. at 6th St. SW, free

4. Booking a White House tour is worth the effort

It's not impossible to do a tour of the White House, but it does take some planning. And a lot of patience. Once you know when you are going to be in D.C., contact the office of your Member of Congress to request tickets. Requests can't be made more than six months in advance, but no less than 21 days before your trip. It can take five months to book one of the self-guided tours, though. Worth it to get access to the country's most important residence.

For all of D.C.'s draws—power, monuments, and living history—shopping hasn't traditionally been at the top of the list. At least until recently. A string of fashion-forward shops has popped up around 14th St. and the U St. Corridor. Jiwon Paik-Nguyen (who has worked for Theory, J. Crew, and Polo Ralph Lauren) imported a little SoHo style to her hometown two-and-a-half years ago with Rue 14, where she stocks wares by BB Dakota and Jeffrey Campbell. And up the street, Christopher Reiter pulled the best contemporary housewares from his four-year adventures across Southeast Asia to fill the floor at Mulèh.

6. Eat breakfast with the cheetahs

Looking for an early-morning destination to hit when the museums are shuttered? The 163-acre grounds of the National Zoo generally open by 6 a.m.(ish)—four hours before its exhibits officially come to life. Stick around and you'll be rewarded with the sight of six resident orangutans making their way—hand over hand—across an almost 500-foot-long stretch of cables connecting two areas. 3001 Connecticut Ave. NW, free

Big-arena sporting events aren't usually known for their affordability, but baseball games at Nationals Park—where tickets start at $5—are one of the best bargains in town, especially when the team's running a special. In previous seasons, for example, groups of two or more pay just $14 a pop for upper-right field terrace seats, a hot dog, chips, and a drink on Saturdays and Sundays. On select Sundays, kids were even invited down to run the bases after the game. 1500 South Capitol St. SE

Unless you're a diplomat, D.C.'s 175-plus international embassies are generally off-limits. But every May, the doors of some 30 missions—often located in historic mansions—open to the public for a day as part of the annual Passport D.C. outreach program. Guests have been able to sample lamb chops and Shiraz, watch a tae kwon do demonstration, or take in a fashion show at the Australian, Korean, and Saudi Arabian embassies, respectively, all for free. During prime afternoon hours, hit the embassies on International Drive, which tend to be larger and less hectic than the rest.

On the first Friday of every month, D.C. residents flock to Dupont Circle, when the neighborhood's quiet constellation of galleries turns into a bustling, decidedly un-snooty fete. Start and end at the nonprofit Hillyer Art Space, the epicenter of the action; you can expect live music and the wine to flow freely until 9 p.m. 9 Hillyer Court NW

D.C.'s venerable hotels (The Hay-Adams, The Willard) have seen a lot of history pass through their gilded lobbies. Get some history on a smaller scale at the Tabard Inn. Located five blocks from the White House, this historic boutique hotel consists of three 19th-century row houses with 40 rooms and a brick and ivy-covered courtyard. It's quaint (that means no elevators and only a few TVs, on request), but it also has just the right comforts, like free Wi-Fi, a pass to the local YMCA, and free breakfast (homemade granola or freshly baked scones with cream). 1739 N Street NW, double rooms from $145

11. Save on hotels by timing it right

Try to hit the city when Congress is away on recess and hotel rates plummet, typically April and August (the congressional schedule is listed online at senate.gov and house.gov). Even the swankiest hotels in town drop their rates by almost 50% when Congress clears out.

12. When it comes to crab cakes, you're going to have to choose sides

Crab cakes are served in two kinds of settings in this town: down and dirty or rich and refined. Which school you pledge allegiance to is your business, of course, so we'll just arm you with tools to make your preferred choice. Frequented by Presidents Grant, Cleveland, and Theodore Roosevelt, according to local lore, the Old Ebbitt Grill lays claim to some justifiably famous crab cakes, made with fresh parsley and Old Bay seasoning (crab cakes $18). The waiters wear red bow ties and suspenders, and diners sit in mahogany and velvet booths beneath antique, gas-lit chandeliers. For the amazing, hole-in-the-wall alternative, grab a stool at the lunch counter (or a seat on the patio) at C.F. Folks Restaurant, where patrons love to chat with the owner—and legendary crank—Art Carlson (crab cake sandwich $14).

13. Where the locals go when they don't have a dinner reservation

In the last few years, D.C.'s culinary scene has gone from an afterthought to one of the city's main attractions. Nowhere is the evolution more evident than the area of Capitol Hill known as Barracks Row. Here, the restaurants serve everything from soul food and Greek meze to authentic Indian cuisine. Find the majority of these low-key dining spots on 8th Street between Pennsylvania Ave. and M Street, where you can stroll along and window-shop the menus before choosing your favorite one.

14. Picnic under the stars (music and moonlight included)

The National Gallery of Art's Sculpture Garden hosts magical—and free—open-air jazz fests every Friday from May to September. Locals know to arrive as early as 3 p.m. to stake out a patch of green on the six-acre lawn, which is dotted with dogwood trees and works by Miró and Calder. Listeners can pack picnics or grab dinner from one of many nearby food trucks or order a glass of homemade sangria from the garden's Pavilion Café. 7th St. and Constitution Ave. NW, free

Don't be fooled by the National Building Museum's vast and pillared Great Hall. This place doesn't actually take itself too seriously. Past exhibitions featured 15 small-scale, intricately detailed replicas of famous buildings made entirely of Legos, and the Building Zone area stocks soft blocks for tykes to create their own monuments. Zippy, half-hour-or-less tours led by Junior Docents (ages 10 to 18) cater to a kid's perspective—and attention span. 401 F St., admission $8

On weekends, Meridian Hill Park is thronged with residents who come to marvel at the Neoclassical waterfall
staircase. But on weekdays, visitors will have the aristocratic formal grounds (designed in the 1930s and modeled after Italy's grand gardens) to themselves. Fuel up at one of several espresso spots, such as U Street Cafe, along the U Street Corridor before setting out for a daytime passagiata in the park (1301 U Street NW; coffee, $2)

Ticketplace, run by the nonprofit Cultural Alliance of Greater Washington, sells half-price seats to concerts, plays, and operas by more than 100 metro D.C. groups throughout the year. Prime spots at a National Symphony Orchestra performance, for example, were listed online at $59 apiece, but those who booked through Ticketplace scored the same seats for only $30 a pop. You can purchase advance or day-of tickets online (upcoming shows are announced on its Twitter feed), or at their downtown outlet (407 7th St. NW).

18. Where to let your hair down

For years, D.C.'s after-hours crowd patronized the tried-and-true bar scenes in the ultra-preppy Georgetown and post-college Adams Morgan neighborhoods. But these days, a new nightlife king is emerging in the up-and-coming Atlas District, a formerly gritty three-block strip near Capitol Hill that brings a surprising twist to its bars. At the H Street Country Club, revelers can play mini-golf and and dine on gourmet Mexican food. Other stand-outs: the year-old and decidedly authentic Bavarian Biergarten Haus, which keeps a dozen German brews on tap, and Dangerously Delicious Pies, which serves sweet and savory made-from-scratch baked goods until 3:30 a.m. on weekends.

You won't hear anyone cracking jokes about cafeteria food at theNational Museum of the American Indian. The museum's sunny Mitsitam Café is considered one of the best lunch spots in town. It pays homage to Native American culinary traditions, with dishes such as buffalo burgers with green chiles ($7.25), maple-and-juniper-glazed salmon ($14.50), and mesquite piñon cookies ($4.50). 4th St. and Independence Ave. SW

While tourists huddle beneath the trees along the Tidal Basin, D.C.'s locals opt instead for the tranquil terraced
gardens atDumbarton Oaks, an 1801 red-brick museum in Georgetown. Its quiet, manicured grounds are filled with cherry and magnolia blossoms, and its blog meticulously details the blooms on a daily basis—so you can schedule your visit accordingly. 1703 32nd St. NW, garden admission $8